Trey Edward Shults uses intense colours, wheeling camerawork and frenetic editing to convey the mounting rage of a high-schooler in this anxious if unreflective movie. 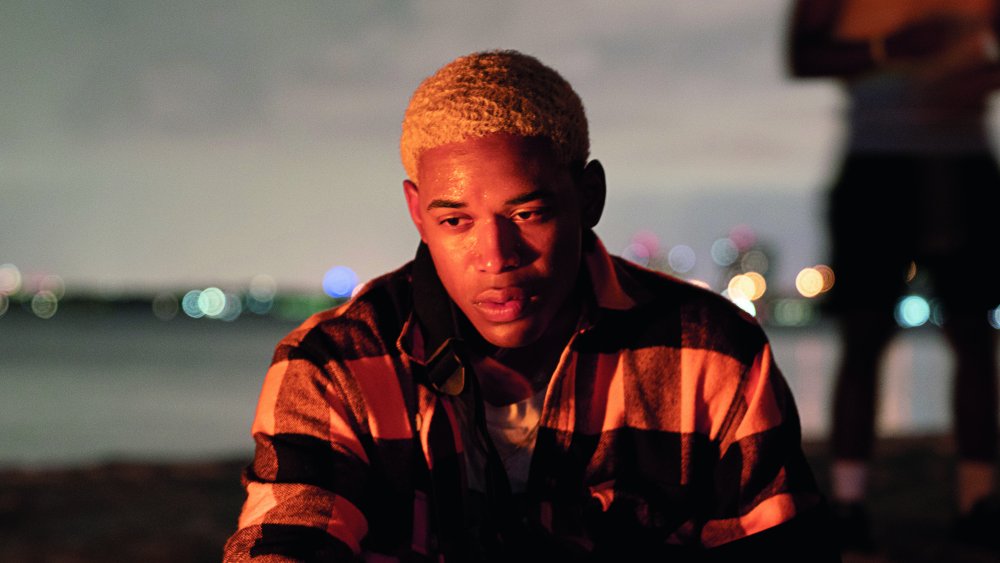 Waves arrives with an eye-catching lacquer of modernity while sitting squarely in the tradition of the teen melodrama. With its pounding pop and hip-hop soundtrack, shifting aspect ratios and powerhouse performances, Trey Edward Shults’s hyper-saturated film channels the same intensity of youthful emotion that Nicholas Ray poured into his Rebel Without a Cause (1955) by way of CinemaScope, WarnerColor and James Dean. However, whether Shults’s film is as successful as its predecessor may depend on more than just the age of the beholder.

The plot is a tricksy thing, hinging on one moment of drama about halfway through, after which the movie pauses, then continues at a tangent.

Without revealing a spoiler, it’s safe to say that the first half of Waves concerns the growing rage and depression of Tyler (Kelvin Harrison Jr), an African-American teenager in his senior year of high school, in the run-up to his prom. So far, so 1955. He appears to be an enviable all-rounder, studying hard, grafting for the family firm and training with the school wrestling team, with a work ethic driven both by his own boyish pride and a competitive, often overbearing father (a brilliantly modulated turn from Sterling K. Brown). He has a caring, constantly exhausted stepmother (Renée Elise Goldsberry, whose phenomenal performance reveals layer after layer of pain), a sweet, shy little sister (Taylor Russell) and a pretty girlfriend, Alexis (Alexa Demie), whom he has saved in his phone as ‘Goddess’. He posts mirror selfies of his flexed muscles to Instagram with the caption “stay blessed fam”: the image of a high-achieving, handsome, popular boy.

However, as we follow Tyler through his busy days and boozy nights in a Florida suburb, we discover that the world is full of triggers for his fiery temper, from parental pressure to a woman who viciously hurls the N-word in his direction. But two things in particular prompt him to disintegrate. First, a serious shoulder injury that he is treating only with booze and purloined painkillers. And, second but not least, Alexis’s period is late.

Waves is a richly stylised film, and considerable energy is invested in building the tension, capturing Tyler’s mounting fury and inviting the audience to wonder where and how it will be most dangerously misdirected. Trent Reznor and Atticus Ross’s excellent score, mostly pushed aside for a hip jukebox soundtrack, provides so much throbbing nervousness during one of Tyler’s wrestling tournaments that it becomes the aural equivalent of bringing a machine gun to a knife fight. It’s almost unbearable, as everything should be in this amped-up teen-melo mode.

Waves is photographed vividly by Shults’s regular cinematographer Drew Daniels, and there’s an unmistakably distinctive colour palette in the first half of the film, of deep blues spiked with bursts of citrus, which continues from Tyler’s bedroom to his Instagram filters, a date at the beach and even the stained-glass windows of his church. This distorts into a haze of electric blue and shocking pink as we lead up to the crisis, and finally the flashing red and blue lights of the emergency services. Sadly, while the film captures his meltdown brilliantly in light and colour, it fails to interrogate Tyler’s motivation (which is misogynistic as well as melancholic), skating away from him shortly after his bristling toxicity damages someone other than himself. 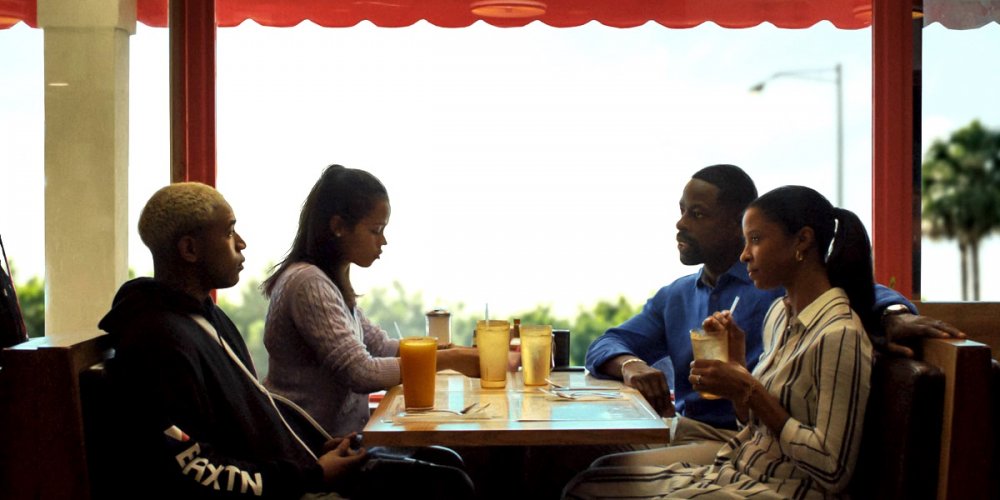 The film’s second half, which focuses on Tyler’s sister Emily in her own graduating year and her romance with fellow student Luke (a drily dorkish Lucas Hedges), has a more neutral colour wheel: it unfolds in a more naturalistic, almost desultory mode, with nothing like the narrative propulsion of Tyler’s story, as the lovers flirt gawkily and share early experiences with sex and drugs.

Russell’s sincere performance is a breath of fresh air in this head-rush of a film, and it’s a poignant pleasure to follow her winding trail. To a point. The film is bookended by disarmingly twee images of Emily cycling down a path, breathing deep and standing up on her pedals – a visual cliché maybe, though not as much as the film’s repeated insistence on showing teens leaning out of car windows in a winsome but hackneyed declaration of youthful joy and free-spiritedness.

The film’s best stylistic flourish is its well-drilled mobile camera, an energetic beast that tracks in and out of the drama and executes perfect pirouettes, both full and semicircular – movements as precise and powerful as Tyler’s wrestling practice. The camera spins 360 degrees in the close quarters of a moving car, more than once, to gleefully disorienting effect.

Partnered with this, in the first half especially, is a relentless pace set by cheekily abrupt cuts that leave each scene early, rushing on to the next with the giddy enthusiasm of a teenage partygoer. The editing is credited to Shults and Isaac Hagy, who has an impressive background in pop-video work among other things. The tempo surges further with each burst of music from Kanye West, Frank Ocean or Animal Collective, slathering another layer of emotional lubricant over the movie.

While Waves has a keen eye for the high-key drama and low-key minutiae of teenage life (lip gloss, Insta-stalking and all), there’s an unsettling feeling that Shults is out of his depth telling a story about a family of colour. The director has said that he developed the story and dialogue in conversation with his impressive lead actor Harrison Jr, but that it’s based on an incident from his own life. In this telling, though, Tyler’s action and his family’s response to it certainly don’t take place in a post-racial paradise, and that’s yet another hot-button issue the film omits to explore.

Ultimately, Waves is a film that feels deeply but thinks quickly. Shults has found a way to transform teenage angst into vivid imagery, and teenage immaturity into a charmingly clumsy romance, but like its young protagonists, it lacks a little in grown-up responsibility when life gets serious.

Related to Waves review: a fast and furious teen melodrama