Film of the week: It Follows

Horror stories are routinely compared to nightmares. Robert Louis Stevenson said the idea for his “fine bogey tale” Strange Case of Dr Jekyll and Mr Hyde came to him in a nightmare, while Bram Stoker claimed that he dreamed up Dracula after dining “on a surfeit of dressed crab”.

Writer-director David Robert Mitchell (The Myth of the American Sleepover) admits that the basic scary idea of It Follows comes from a recurring dream he experienced as a child – the not uncommon terror of being pursued by something relatively slow but relentless. The notion informs horror/suspense classics such as Halloween (1978) and The Terminator (1984) – and gives rise to the often lampooned slasher-film cliché of the killer ambling at his leisure after victims who run away at top speed but keep tripping up or spraining an ankle in order that they can be murdered – but it has seldom been used as simply and effectively as here.

A prologue featuring the gruesome death of a previous victim, who runs to the shore and can go no further before her fate catches up with her, makes clear the fatal consequences of being tagged by the pursuer. After this shock, the rest of the film gets scares simply by having the mute, murderous spirit walk towards heroine Jay at an even pace, unseen except by those who have been cursed.

The follower takes the form of many people – a few recognisable, most not. In the climax, it appears to Jay as her absent (dead?) father; earlier, it kills Jay’s ex Greg while in the form of his (living) mother, battering at his bedroom door, and shows itself to a briefly uncursed Jay creeping into Greg’s house while looking like a sleepwalking Greg. Most of the forms it takes are unexplained, but they seem – in the mode of the unquiet dead of The Sixth Sense or the grudge-holding spooks of J-horror – to be atrocity victims, with a relatively high incidence of naked, bloodied women, though there’s also an unusually tall man and a couple of folks who seem simply dazed or unconcerned. Of course, a few red herrings walk into the frame, only to be identified as harmless.

Having dreamed up a fresh horror menace, Mitchell explores the logic of his own invented mythology. There’s plainly a subtext about STDs and casual sex – the curse’s means of passing from one victim to the next. Jay is shocked by the sudden transformation of her seemingly caring boyfriend after she’s had sex with him in the back of his car: he drugs her and then ties her to a chair “for her own good” to show her an incarnation of the follower stumbling towards them.

Even after she’s convinced of her peril, Jay is most upset by the callous treatment he has meted out to her. His assurance that she’ll have no trouble finding someone else to have sex with in order to pass on the curse – because “you’re pretty” – only makes things worse. This is not a story about a woman punished for having sex, but an indictment of the calculating guy who gets out from under the curse by passing it on to an innocent. Jay agonises about the moral implications of following suit in a way he didn’t even consider. 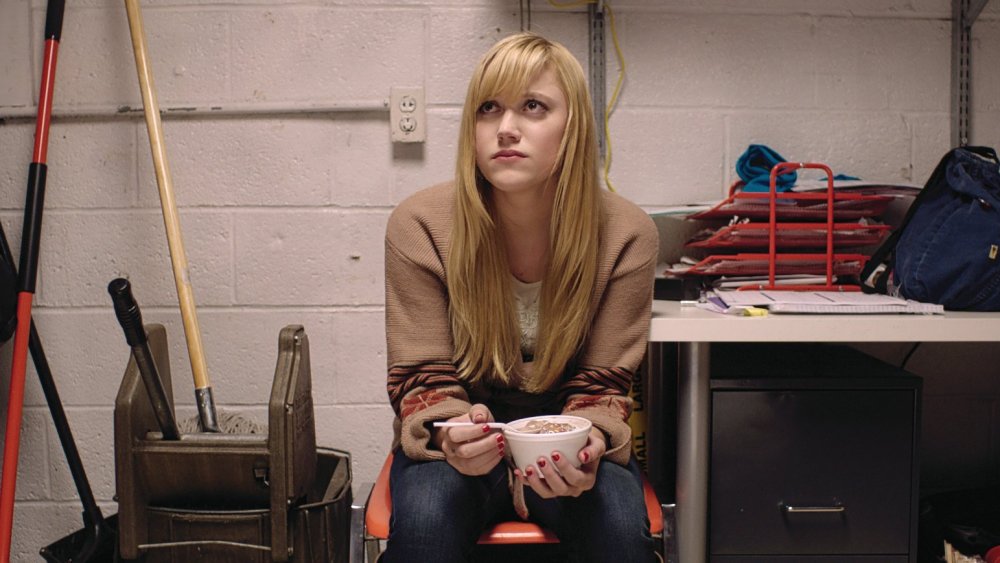 Unusually in contemporary horror, Mitchell surrounds his heroine with friends and relatives who are sympathetic to her plight and do their best to help, even if it puts them in jeopardy too. Note, however, the spark of opportunism in Jay’s male would-be saviours as they volunteer to sleep with her for her own good.

The film is deliberately vague about when it’s set. The inspired use of depopulated, post-industrial Detroit (also a locus of the supernatural in Only Lovers Left Alive) gives It Follows a sense of economic apocalypse, but the film is almost as stylised as Brick (or, as Mitchell says, Peanuts) in its depiction of a world with few adult presences, where kids have to cope with their own problems by themselves but also have the freedom to take off for days on end to fight monsters.

Mitchell uses the widescreen frame in the manner of vintage John Carpenter, while Disasterpeace (aka Rich Vreeland) contributes a score that evokes Carpenter’s insistent synth sounds but forges its own unique, nerve-scraping identity.

Bright spark Maika Monroe, also the ‘final girl’ in last year’s The Guest, leads a young, comparatively unfamiliar cast; in contrast to the way ‘kids’ are represented in much contemporary genre cinema (cf. Eli Roth, Rob Zombie), Mitchell is sensitive to the complicated nuances of teenage friendship, rooting the horror in relationships that are believable and affecting. 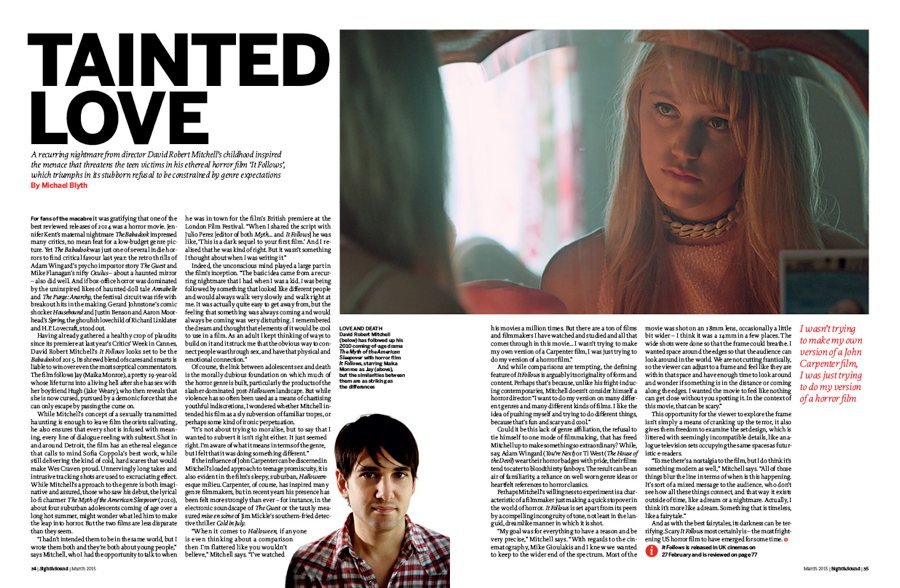 A recurring nightmare from director David Robert Mitchell’s childhood inspired the menace that threatens the teen victims in his ethereal horror film It Follows, which triumphs in its stubborn refusal to be constrained by genre expectations. By Michael Blyth.

Related to Film of the week: It Follows