Film of the week: Moonlight, a prism of repression and desire, awash in poetry

Barry Jenkins’ three-ages portrait of a queer black youth comes bearing a weight of significance; but its nuanced ensemble performances and agile formalism give it a rare beauty and tenderness. 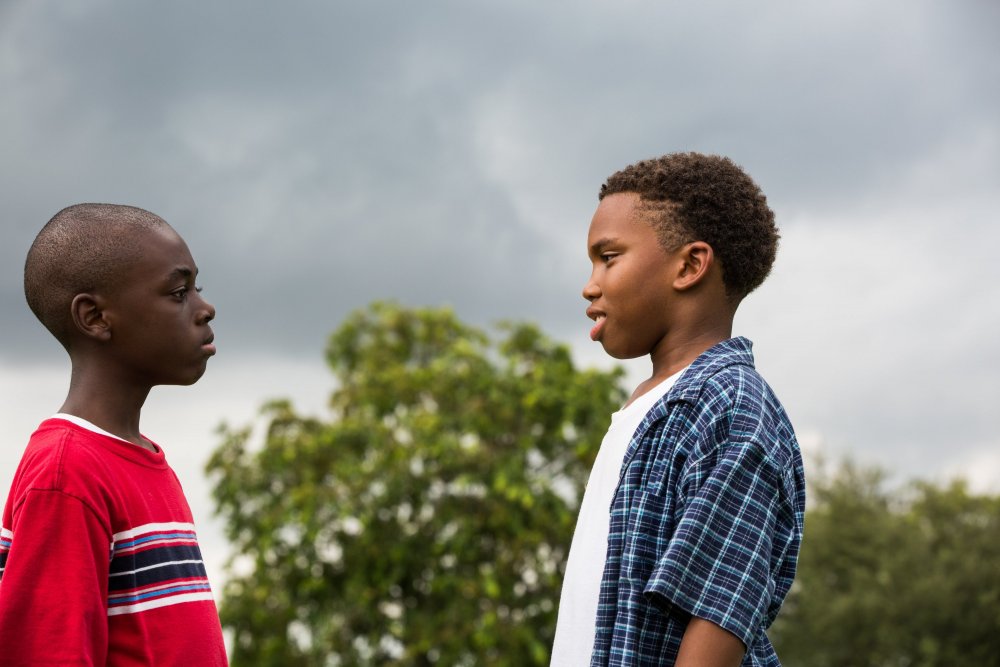 The process by which a small movie like Moonlight comes to loom large over global film culture is a complicated one. The most admirable thing about Barry Jenkins’s adaptation of playwright Tarell Alvin McCraney’s In Moonlight Black Boys Look Blue is its commitment to intimacy; this strength is manifested in the skilful proximity of James Laxton’s cinematography and the small-scale parameters of the storyline, which follows a single character as he ages from a child to a young adult.

But Moonlight has come to symbolise something bigger: perhaps more than any other release of the past year, Jenkins’s film has been anointed a Movie of the Moment. Whether or not that designation refers triumphally to its status as an artwork describing contemporary African-American life through the eyes of one of its own or, more tenderly, as a final, valedictory exercise in Obama-era identity politics before America Makes Itself Great Again, it’s a lot of significance for one film to bear.

Moonlight betrays this weightiness at the top of its third section, which begins with a piece of onscreen text reading ‘iii. Black’. The word is being used as a proper name, or rather a street moniker, for the film’s Miami-born protagonist, who has previously been encountered in chapters entitled ‘Little’ (his childhood nickname) and ‘Chiron’ (the name that’s on his birth certificate). Introducing the character by different names at different points in his life is a clever, economical way of suggesting that he contains multitudes, and yet Jenkins is also reaching a bit with that conspicuous, calculated use of ‘Black’, which could be seen as an attempt to universalise Chiron’s story, or to turn him into a stand-in of sorts for the intersecting racial and sexual demographic he inhabits. In this final, twentysomething incarnation, played by Trevante Rhodes, Chiron is hulked-up and physically armoured to the point that he looks almost indistinguishable from the alpha-male cowards who bullied him when he was a kid: a suggestive bit of dramaturgy barbed spikily with sociology. 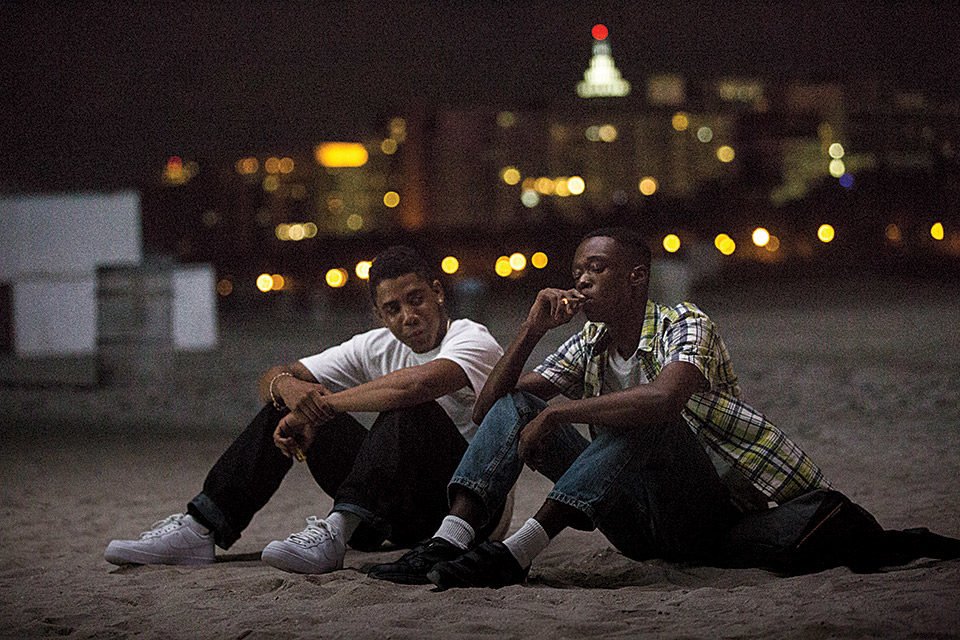 Moonlight’s uniqueness as a film about a queer black youth cannot be overstated, and it skilfully filters rhetoric through realism, as when Little (Alex Hibbert) is chased aggressively into an abandoned crack house by his playmates. It’s a stark bit of staging that reflects a bigger, sadly credible ghetto trajectory.

Little’s saviour in this tight spot is a dealer named Juan (Mahershala Ali) who literally breaks through the barrier separating the terrified boy from the outside world and quickly becomes a dedicated father figure: the majority of the film’s first vignette describes the tightening of their bond. Driving Little back to his house, Juan palms his car’s steering wheel with a family man’s easy grace. It’s the same relaxed mastery that Black will demonstrate driving his own vehicle later on, after relocating to Atlanta, where he’s taken up dealing as well – a revelation that’s given extra sting by our knowledge at this point in the story that Juan didn’t make it out of his own professional trap alive.

Moonlight is awash with these kinds of visual and dramatic rhymes. Jenkins builds each section around a close encounter on or near a beach, and there’s an exhilarating symmetry between the early scene where Juan teaches Little how to swim by holding him steady in the surf and teenage Chiron (Ashton Sanders) kissing his friend Kevin (Jharrel Jerome) in the dark on the sand: paternal intimacy and adolescent experimentation each rendered with fleshy, tactile eroticism. Jenkins has cited Wong Kar-wai and Claire Denis as inspirations, and both are duly evoked, although an even more apropos reference point might be the Hou Hsiao-Hsien of Three Times (2005), another triptych designed as a series of interlacing motifs (and similarly pivoting on the theme of repressed desire). 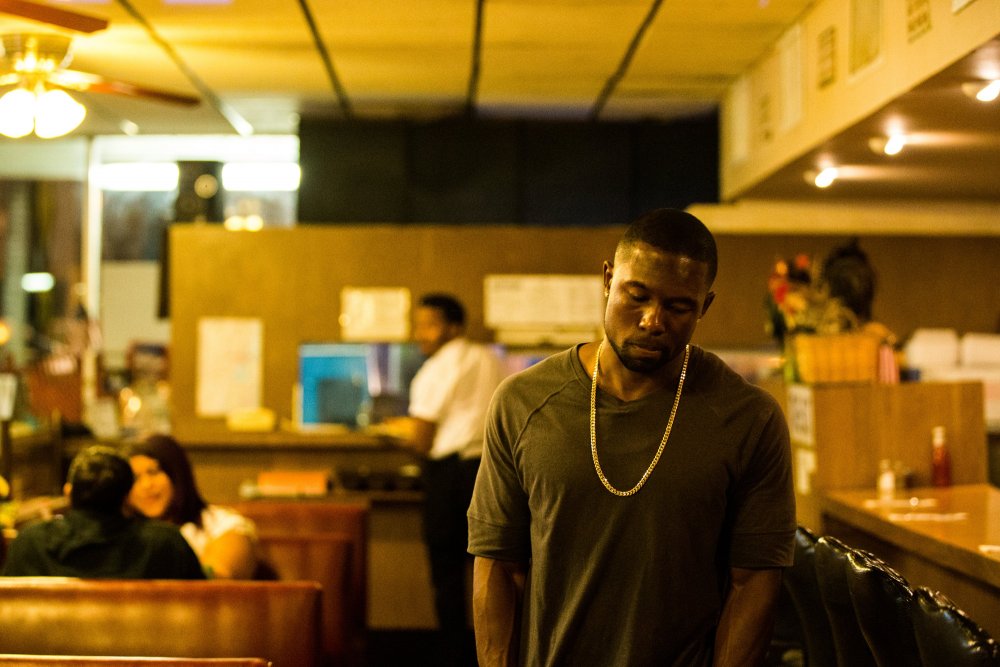 In addition to his agile formalism, Jenkins has a real sensitivity for actors, and other than Naomie Harris – whose unconvincing performance as Chiron’s mother Paula is a by-product of her thinly written role – Moonlight boasts a superb ensemble. Not only the three Chirons, who have been carefully guided along a continuum of shared cadences and gestures, but also Ali, whose handsomely hard-lined face is alternately a tough-guy mask and an open book; and André Holland, perfectly cast as the wary, regretful older version of high-school peacock Kevin, a character whose gradual movement to the story’s very heart is beautifully engineered. In the closing encounter between Black and Kevin, the actors’ gently shape-shifting rapport in a dimly lit diner has the uncanny feel of a surreptitiously overheard conversation. Even as the two old friends talk cautiously around their shared history, the emotions between them cut loud and clear through the background clatter, proving that Moonlight is at its most eloquent when its subtext is soft-spoken. 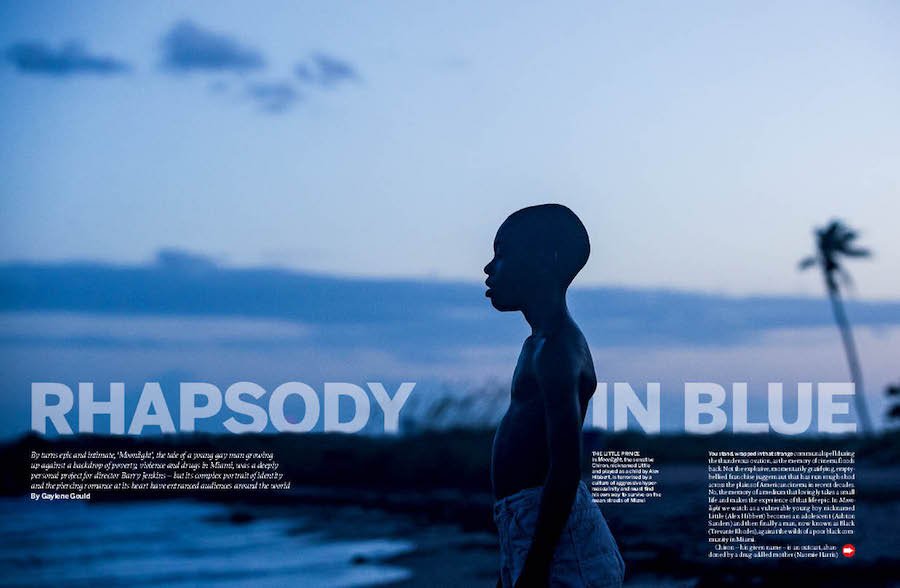 By turns epic and intimate, Moonlight, the tale of a young gay man growing up against a backdrop of poverty, violence and drugs in Miami, was a deeply personal project for director Barry Jenkins – but its complex portrait of identity and the piercing romance at its heart have entranced audiences around the world. By Gaylene Gould.

Related to Film of the week: Moonlight, a prism of repression and desire, awash in poetry