Bombshell review: a rote walk-through of the Fox News scandal

Jay Roach’s glossy, talkie film benefits from the sharp performances of Charlize Theron, Nicole Kidman and Margot Robbie but both over-explains and over-fictionalises the reality of sexual harassment.

☞ She Said book review: Harvey Weinstein’s downfall is just the beginning of the story 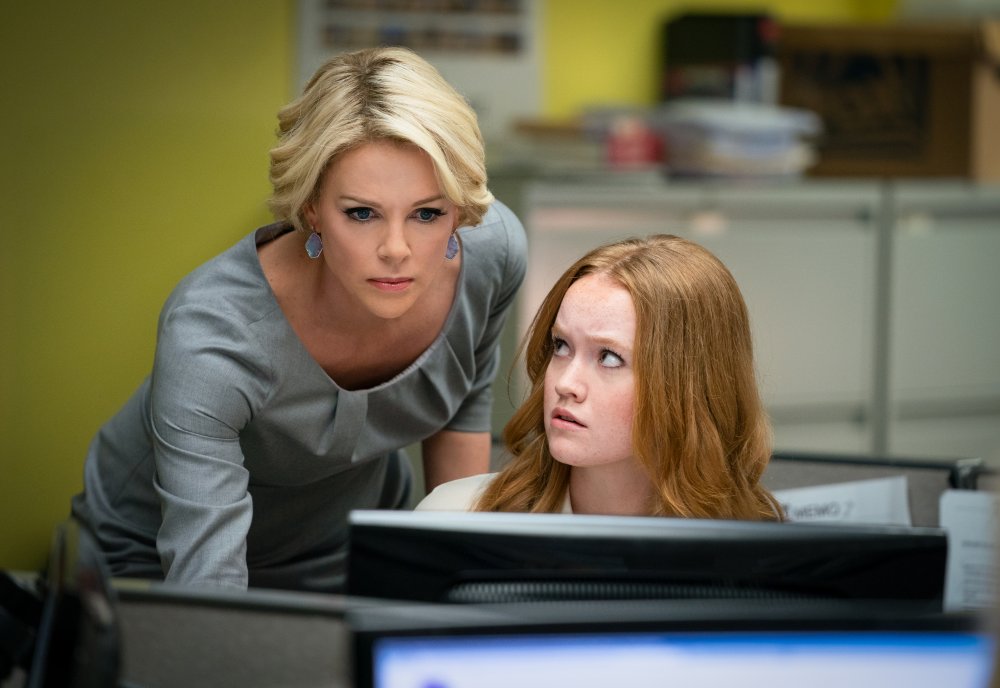 In Bombshell, Fox News CEO Roger Ailes (John Lithgow) wonders out loud whether any of the women he sexually harassed have suffered long-term consequences. Rupert Murdoch (Malcolm McDowell) snaps back: “There’s no audience for that side of the story.” There sure isn’t. While the recent TV mini-series The Loudest Voice focused on the perpetrator’s past, Bombshell is the story of the female journalists who accused him.

Charles Randolph’s script offers a verbose primer on sexual harassment, for those who haven’t been keeping up. Although the exposition-to-camera in the style of his The Big Short (2015) is mercifully at a minimum, the screen is littered with captions, and the presentation by director Jay Roach is as slick and bombastic as a Fox broadcast. The leads share the corporate wardrobe of miniskirts, stilettos and blow-dries, and the film’s defining image must be an extreme close-up of pink glossed lips over white teeth. Fox’s culture is laid bare by a striking scene in which presenters defend Ailes to journalists over the phone while squeezing into shapewear and padding their bras before they hit the studio.

There’s a curious mix of fact and fiction here. Alongside Charlize Theron, uncannily mimicking Fox presenter Megyn Kelly, who incurs the megawatt ire of Donald Trump live on air, and Nicole Kidman as Gretchen Carlson, the colleague who sparks the investigation into Ailes, Margot Robbie plays an invented character named Kayla. Fiercely determined, Kayla dreams of filling “the Jesus space” at Fox as an “evangelical millennial”. Her grisly encounter with Ailes in his office is a horribly explicit illustration of what happens when unstoppable ambition meets an immovable bastard. Kayla’s fall is swift and horrific, even with a detour to the bed of a closeted, Clinton-supporting lesbian on the Fox payroll (a rich turn from Kate McKinnon) and an unconvincingly upbeat denouement.

Cheerfully embracing Fox values, Kayla embodies Ailes’s demands that his presenters be both likeable and leggy. Similarly, while Lithgow’s Ailes is a paranoid, barrel-bellied monster, Bombshell invests in broadening the appeal of its rightwing heroines: Kelly is visibly attacked on all sides, a reluctant feminist slamming a gargantuan ring binder labelled ‘Trump and Women’ on to her desk; Kidman is impressively steely as Carlson, the worm that keeps turning.

It’s Bombshell’s modus operandi that female leads are continually explaining things to men, but the women-only interactions are the strongest – epitomised by a moment when Gretchen, Megyn and Kayla silently share the same lift. These three say as much in that scene about the mechanics of the media business as several such films could hope to cover.

Related to Bombshell review: a rote walk-through of the Fox News scandal