To the #TimesUp moment and the world after Weinstein, Cannes offered an anti-harrasment hotline – but mostly just ceded its platform to women themselves to make the change. 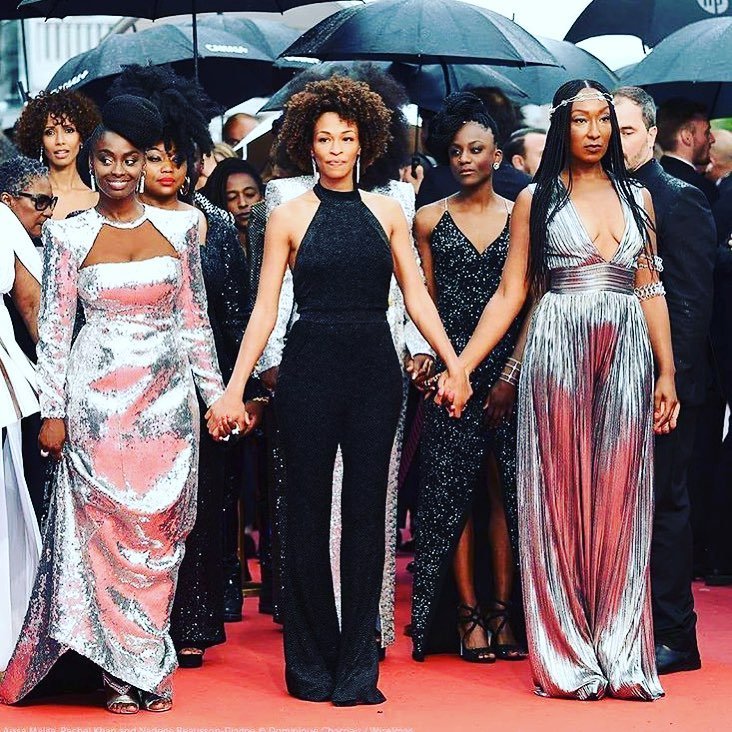 The Festival des Cannes 2018 was the 71st edition of one of the cinematic world’s most prestigious events – but the first to take place in the wake of the #MeToo and #TimesUp campaigns that followed revelations about widespread abuses of male power at all levels of the film industry. In the newly post-Weinstein landscape, it was only to be expected that conversations on the Croisette would turn to issues of gender equality and women’s historic erasure from Cannes’s programme. And in some respects it appears that the festival is beginning to take notice – and, more importantly, to act.

The stage was set for a more woman-friendly Cannes by the presence of five women on the nine-person jury. Led by Cate Blanchett, and featuring Ava DuVernay, Khadja Nin, Léa Seydoux and Kristen Stewart, the race and gender representation on the committee that awards the Palme d’Or is the most diverse in the Festival’s history, and suggests that the organisers are listening to criticism from women and people of colour.

Attendees were also assured that the organisers would ‘stand up’ to “harassment, violence and abuse”, in an announcement about a special hotline for people to report their experiences of unethical behaviour. Established with the help of the French Ministry of Gender Equality, the advertisement for the hotline, which was set up to offer advice and support, echoed the language of #MeToo and #TimesUp in suggesting that “the time has come to speak out” and for the Festival to “stand shoulder to shoulder with victims”.

A similar sentiment was on display at the American Pavilion. A sign tacked to the door revealed that it had “joined the Festival in its efforts to minimise incidents of sexual harassment” and would revoke membership if necessary to “maintain a safe environment for our members”.

Yet while these actions are welcome, especially for casting a spotlight on the usually hidden issues of harassment and abuse in the industry, hotlines and posters are not necessarily effective. It is not clear what – if any – action the festival teams could take following allegations made over the phone, or indeed whether they were properly trained to provide support, beyond demonstrating powers of empathy. Nor did the festival attempt to define harassment or violence, or issue codes of conduct that might have prevented men demonstrating abusive behaviour in the first place. The festival has vowed to release data about the number of calls received after it has finished: just how transparent about its investigative processes it will be remains to be seen.

Where there was greater transparency was in the 50/50 by 2020 pledge signed by Cannes’s General Delegate Thierry Frémaux, which calls for Cannes to work towards achieving gender equality on the competition programme in two years’ time. Melissa Silverstein, founder of gender equality and advocacy group Women and Hollywood, was present at the signing. She wrote: “It was clear that Frémaux was very uncomfortable” and that “he had never read the pledge before. He is showing his lack of interest, and lack of understanding on this topic.” While recognition of the pledge is a significant moment in the history of the festival, and gives women greater leverage in their attempts to make programming fairer, reports that Frémaux made sexist jokes at the event suggest the gesture is largely performative.

Of course, the pledge itself was not initiated by the festival, but by women working in the film industry. And it was women doing all the work at Cannes to bring about real change. Anna Serner of the Swedish Film Institute led the 50/50 by 2020 charge at a well-attended panel discussion. Silverstein’s Women and Hollywood networking events brought together women from around the world to share their plans for bringing about equality through funding, festivals and support for filmmakers. And the Women in Film and Television events featured researchers from the UK’s Calling the Shots project, which revealed that the British film industry “can be worse than Hollywood for female filmmakers”.

Over on the red carpet, women were, somewhat unusually for Cannes, grabbing headlines not for their clothes but for their political protests. On Saturday, 82 women took to the steps of the Grand Théâtre Lumière to represent the number of women who have had their films shown in competition in the festival’s 71-year history (as opposed to 1,688 men). Blanchett and DuVernay stood alongside Patty Jenkins and Jane Fonda to draw attention to the continuing inequalities that women face in the film industry.

Then on Wednesday 16 women of colour, including actress Aïssa Maïga, protested the lack of black women on screen ahead of the premiere of Burning. And, drawing attention to the Festival’s famously gendered rules around red-carpet fashion, Kristen Stewart removed her heels to walk up the Palais steps barefoot.

Despite shows of solidarity such as hotlines and pledges, the Festival appears to be struggling to find meaningful solutions to the problems of male power and privilege that dictate programming on the Croisette. After all, if you’re going to transform the industry you have to want to in the first place. However, it seems that the women at the Festival des Cannes will keep acting and will not be sitting down or shutting up any time soon.

As Silverstein emailed me, “The change is being driven by women. The festival would not have done the activities had women not pressed them. That is for sure.” She adds that “all festivals should be looking at their systems of how they handle submissions, who picks them and all other aspects in order to ensure that these systems are objective not subjective. That is the key. Making it more accessible for women.”

Following an inspiring array of women-led protests and events, there are many reasons to be optimistic about the future. Whether or not Frémaux takes gender equality seriously, it will surely happen, even if the sisters at Cannes have to do it all for themselves.