Now an all-dayer rather than an all-nighter, taking place three days after the actual Halloween (or almost a year before the next one), and situated for the first time in the Cineworld Cinema on London’s Leicester Square, this year’s Halloween FrightFest event offered a showcase of six features unified only by their eclecticism and variety. So it was a pick ’n’mix affair, all killer and almost no filler. 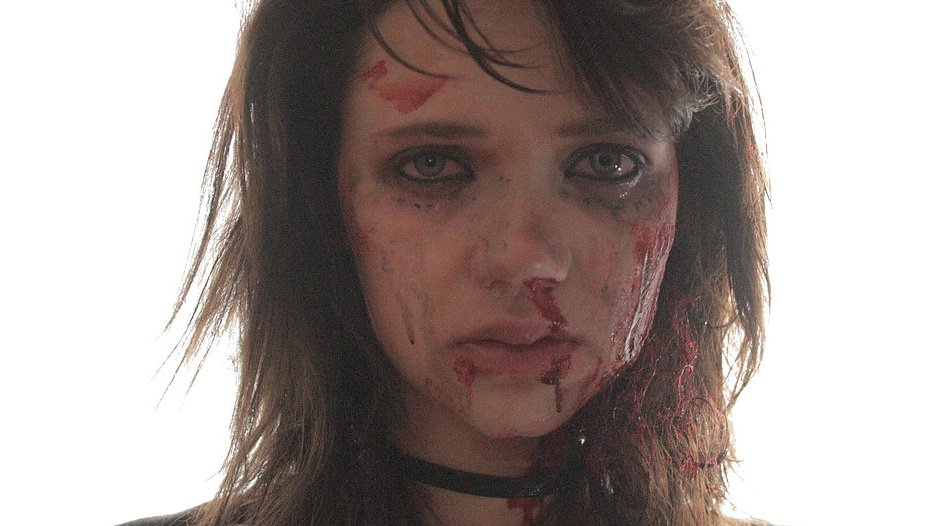 Kayleigh Gilbert as Tess in Reborn

Long after his deliriously self-referential The Last Horror Movie (2003), Julian Richards returns to metacinema with Reborn. It opens with a stillborn baby being miraculously brought back to life, Frankenstein-style, by a lightning strike in a hospital’s basement morgue. Sixteen years later, electrokinetic Tess (Kayleigh Gilbert) escapes the voyeuristic psycho who has kept her (along with his mummified mother) in a suburban LA home, and leaves a trail of corpses in her quest for her real mother. Meanwhile washed-up actress – and acting coach – Lena O’Neill hopes for a role as a mother meeting her long-lost daughter in Peter Bogdanovich’s latest film, if only she can work through her guilt about a stillbirth 16 years earlier…

There are all manner of reflective symmetries here. Lena – a former scream queen seeking a comeback – is played by former scream queen with a comeback Barbara Crampton and, judging by the poster on her wall for Re-Animator (another film featuring resurrections in a basement morgue), also shares Crampton’s filmography. As various dysfunctional mother-and-daughter scenarios (scripted or ‘real’) are played out under the Hollywood sign, and other actors are revived from their 1980s heyday (Michael Paré as an LAPD detective, Rae Dawn Chong as Lena’s agent), Reborn merely masquerades as the sort of schlocky B- movie that Lena once made, while in fact offering a sophisticated dramatisation of an actress’s internalised ‘method’ of processing personal trauma into performance.

“What the hell is this?” asks Noel (Martin Wallstrõm), as he stares at a popular comic book he has never seen before entitled Los Parecidos (or The Similars). Yet where writer-director Isaac Ezban’s 2015 film of the same name (in which that comic featured prominently) was concerned with likeness and assimilation, his latest, Parallel, is more preoccupied with difference, as Noel and his four housemates Leena (Georgia King), Devin (Aml Ameen) and Josh (Mark O’Brien) stumble upon an attic mirror that is a portal to parallel universes, and start to exploit the slight variations in those worlds to improve their own lives in this one.

While Josh is looking for sexual opportunity and Devin for reconciliation with his late father, Leena and Noel focus instead on the theft of intellectual property for their own enrichment and celebrity – even as Ezban weaves his own plot out of elements overtly borrowed from Primer, Groundhog Day, Coherence, Oculus and Invasion of the Body Snatchers. The result is both heady multi-dimensional sci-fi and a self-conscious discourse on originality and alteration. “I’m not stealing sketches,” Leena insists to Devin, “I’m appropriating art.” Here, the difference is everything, and integrity is always up for grabs.

Clive Tonge’s feature debut puts forensic psychologist Kate Fuller (Olga Kurylenko) on an ambiguous case, as she must work out whether a mother accused of murdering her own husband is a dangerous, deluded killer or is being pursued, along with fellow sufferers of sleep paralysis, by a pre-Christian sleep demon.

As this is a horror film, you can probably guess whether in the end things tilt in favour of scientific rationalism or the ancient supernatural, but along the way several equally antiquated tropes and clichés are also raised, like the desperation to stay awake from A Nightmare on Elm Street, the heroine racing to escape her doom (and the contorted corpses) from Ringu and the long-limbed Javier Botet embodying a creature whose name is only one letter away from the otherwise similar figure that he played in Mama. The locations in Savannah, Georgia are atmospheric, but there is much clumsy exposition and some very lazy ‘boo!’-type scares.

Were the Halloween FrightFest still an all-nighter, I suspect those attending would also have struggled to keep their eyes open in this competent yet rote outing. Rodney Ascher’s documentary on (more or less) the same topic, The Nightmare, is more frightening.

Like 8½, House, Barton Fink, Adaptation., Swimming Pool, Twixt, mother! and many others, Paul Hyett’s Peripheral (written by Dan Schaffer) is a film about creative block, showing an artist’s struggles to conjure something from nothing while having to cope with pressures both external and internal.

Bite the Hand, the inflammatory debut novel of Bobbi Johnson (Hannah Arterton), spoke to the frustrations of Britain’s youth, leading to actual rioting in the streets. Now faced with writing her follow-up, the reclusive author must battle poverty, drug addiction, a crazed stalker (Rosie Day) and her own sense of inadequacy, isolation and fear – but mostly she must set aside her beloved old typewriter and, at the insistence of corporate publisher Jordan (Belinda Stewart-Wilson), start writing on a new state-of-the-art computer that might just represent Bobbi’s surrender to the establishment ‘machine’ to which her work is supposed to be a radical antidote.

David Cronenberg made his own writer’s block movie, Naked Lunch, reimagining the surreal travails of William S. Burroughs’ alter ego William Lee. For inspiration, Bobbi keeps on her wall posters of old-school novelists such as Burroughs – yet it is another Cronenberg film, Videodrome, as well as David Lynch’s Eraserhead, that are the biggest influences on Peripheral’s visualisation of Bobbi’s writing process, here figured both as monitor-induced body horror and (pro)creative ordeal. Even as Bobbi finally reads the small print of her contracts with both her readership and her employer (Jenny Seagrove), her own voice, though altered, exaggerated and literally shredded, survives the ensuing compromises to be reconstructed and decoded. The ink-stained results, messy and unnerving, are an introspective oddity and a dystopian satire of the individual’s place in a closed political system. It’s easily Hyett’s finest film.

Working at the power station in rural Vånga, Sweden, ex-soldier Björn (Jesper Barkselius) is a bullying ball of rage who loves his wife and their quiet son Alex (Christoffer Nordenrot), but nonetheless pushes them away. Alex loves Anna (Lisa Henni), who is taken away from him by both her career politician mother Eva (Pia Halvorsen) and his own nascent pig-headedness. Years later, Alex has become a celebrated musician, scarred by his memories of a past that he cannot quite forget and leading a sad, solitary life in Stockholm – but he will be reunited with Anna in the middle of a national catastrophe only hinted at in the film’s prefatory flash-forward (a vision of smoke plumes and abandoned cars burning in the rain).

“Make the most of the time you have together,” advises Eva in an emergency broadcast to the nation, “before it’s too late.” This cuts to the heart of The Unthinkable, directed and co-written by Victor Danell (working under the name ‘Crazy Pictures’). For it reduces the tropes of a huge-scale disaster movie to relatable family dramas, starting off as A Swedish Love Story before descending, with extreme rapidity, into the territories of The Happening and Red Dawn. With superb cinematography and convincing (if understandably confused) characters, it is an often surreal, eventually epic and ultimately moving film that confronts peaceable Swedes with a callous, state-threatening scenario that seems all too plausible.

Now in his forties, stage magician Lorenzo Mancini (German Baudino) is haunted by the past. As a child in 1951 he had witnessed the on-stage death of his magician father Dante the Great (Raul Gederini); now, as Lorenzo brings his own show to the same theatre 30 years later, someone is murdering people around him in a manner that makes Lorenzo look like the guilty party.

Writer-director brothers Luciano and Nicolás Onetti also look back to the past. For, as with their previous features Deep Sleep and Francesca, they are conjuring the many codes and clichés of a classic giallo while pulling their final twisty trick out of a much older cinematic hat. This is a loving recreation of bygone tropes, as our washed-up illusionist struggles to see the reality behind all the narrative sleight of hand. The solution, when it comes, satisfyingly sees past all the smoke and mirrors; but before then, the Onettis’ extraordinary evocation of an era of Italian thriller filmmaking (including Luciano’s wonderful score) that now seems like a dream is one to savour.