Night of the long backward glances: the FrightFest October All-Nighter 2013

The spirits of movies of yore came out to play at this year’s Hallowe’en horror bender.

The spirits of movies of yore came out to play at this year’s Hallowe’en horror bender.

Not so very long ago, only dodgy second-generation videos and the odd specialist event catered to the deviant tastes of horror hounds interested in more than just studio output. For the last decade or so, however, accompanying the exponential increase in the number of legally available non-Hollywood horror films (itself a product of the advent of digital cameras, online distribution and a gradual relaxing of censorship), there’s been a proliferation in dedicated programmes and festivals where they can be exhibited for those who crave a bigger screen and more company than home viewing allows.

Ironically, this very cornucopia of creepiness creates something of a challenge for the annual FrightFest Hallowe’en All-Nighter. For not only must its programme avoid overlapping with the record number of features (53!) that screened at FrightFest’s own main event at the end of August, but it also has to compete with the many other horror events that cluster around October (Grimmfest in Manchester, the British Horror Film Festival in London, Celluloid Screams in Sheffield, the Bram Stoker International Festival in Whitby, Mayhem in Nottingham, Abertoir in Aberystwyth, plus countless local Hallowe’en events), as well as the London Film Festival’s Cult strand and the BFI’s Gothic season.

Until recently the country’s first and best programmer of genre cinema, FrightFest is now just one address amongst many where viewers can come knocking for their Hallowe’en tricks and treats – and overkill, though not always a problem in a horror film, definitely risks becoming one for the horror festival.

At past Hallowe’en FrightFest events, there has always been one title to treasure – Inside in 2007, Pig Hunt in 2008, Paranormal Activity in 2009, Confessions in 2010, Livid in 2011 and The Tall Man in 2012. This year, however, while there was plenty of solid quality on offer, nothing stood out as a potential classic, and arguably the most memorable moment came not in a film but rather when a grey-haired member of the audience was coaxed by tipsy festival organiser Paul McEvoy to perform an astonishing break-dancing routine on stage, complete with multiple rolls and eye-watering splits.

That said, this year’s six films did offer distractions of their own. The evening started quietly with horror critic Axelle Carolyn’s feature debut Soulmate, in which musician Audrey, suicidal with grief over the recent death of her husband, seeks refuge and perhaps recovery in an isolated cottage in Wales, only to find herself haunted by a resident phantom (Tom Wisdom) with a tragic history similar to her own.

So begins a gothic romance cum ghost story where the supernatural and the psychological blur into one. The shrill melodrama of the film’s climax seemed out of keeping with both the creeping pace of what had preceded and the subtle ambiguity of the final scene – an ambiguity so underplayed that several FrightFesters with whom I spoke afterwards seemed, like the film’s own sceptic character Dr Zellaby, unconvinced that it was there at all. Anna Walton, at least, gives a strong performance as the conflicted Audrey, caught as she is between the living and the dead – and the locations are rather picturesque. 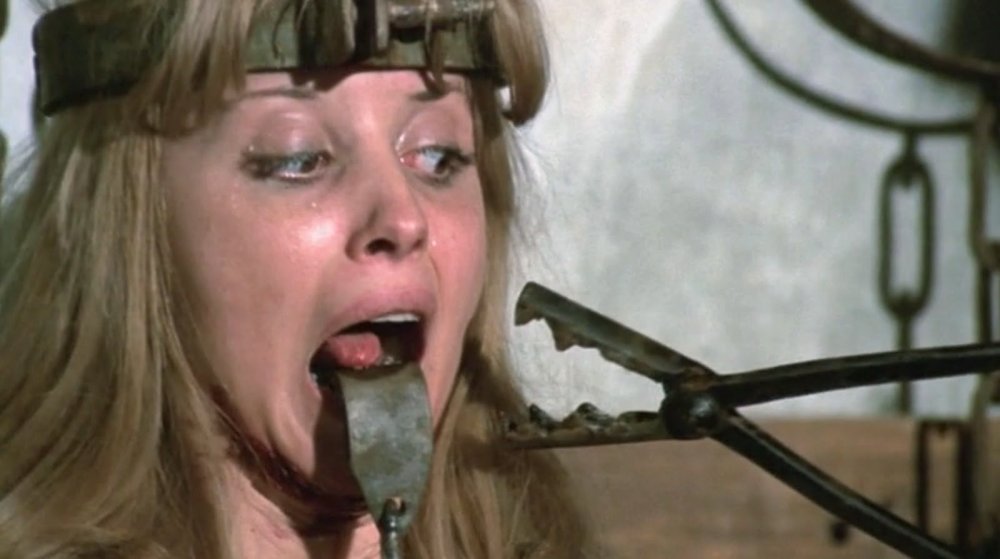 While overall the least impressive of the line-up’s new features, Soulmate certainly did establish a pattern for the long night ahead. For if it resurrected the spirit of The Ghost and Mrs Muir (1947), then all the programmed films were unified by their similar backward glance to films past. The exception was Michael Armstrong’s Mark of the Devil (1969), which simply is a film of the past (although it too riffs off 1968’s Witchfinder General, on which Armstrong had been assistant director to Michael Reeves).

Armstrong’s film has suffered a long history of censorship in Britain and elsewhere, ostensibly for its scenes of rape and torture, but more probably for its anti-clerical, anti-establishment stance – and this was in fact its first-ever uncut theatrical screening. Far from being a serious, or even effective, indictment of religious hypocrisy in eighteenth-century Austria, though, Mark of the Devil is a camp romp, with any claims to gravity undone by Michael Holm’s absurdly cheesy score, Armstrong’s broad, ripe dialogue and pantomime turns from the likes of Herbert Lom and Udo Kier. It’s a curiosity alright, but more akin to a Monty Python feature (with its tits out) than to, say, The Devils (1971). 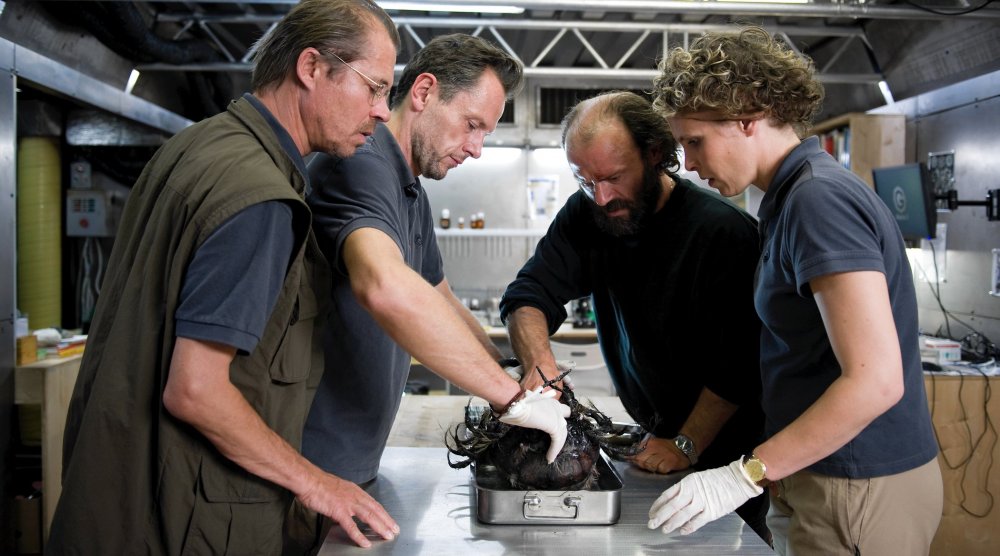 Also set in Austria, Marvin Kren’s The Station shows a small group of Alpine mineralogists and biologists who discover an ancient microorganism newly unearthed by the melting of the glaciers, and set to tip the balance of nature back to a ‘mythological’ era of monstrous hybrids.

Of course, these hapless, beleaguered scientists are also excavating the tropes of John Carpenter’s The Thing (1982), itself spliced from the mixed DNA of The Thing from Another World (1951) and Alien (1979). But the striking image of a blood-red glacier (which gave the film its original German-language title, Blutgletscher) foregrounds a new and timely ecological preoccupation, while Kren and screenwriter Benjamin Hessler slyly subvert all manner of clichés by making the scientists venal and self-serving, and the politician genuinely altruistic. It’s a smart, contemporary creature feature that addresses, through genre, the radical environmental changes that we’re all dooming ourselves to fight, flee or adopt.

After documenting exploitation features in Not Quite Hollywood: The Wild, Untold Story of Ozploitation! (2008) and Machete Maidens Unleashed! (2010), Mark Hartley makes – or more precisely remakes – his own with Patrick, reimagined from Richard Franklin’s 1978 original as a piece of hysterical high gothic with giallo-esque trimmings (not least the fabulously over-the-top score by Pino Donaggio). 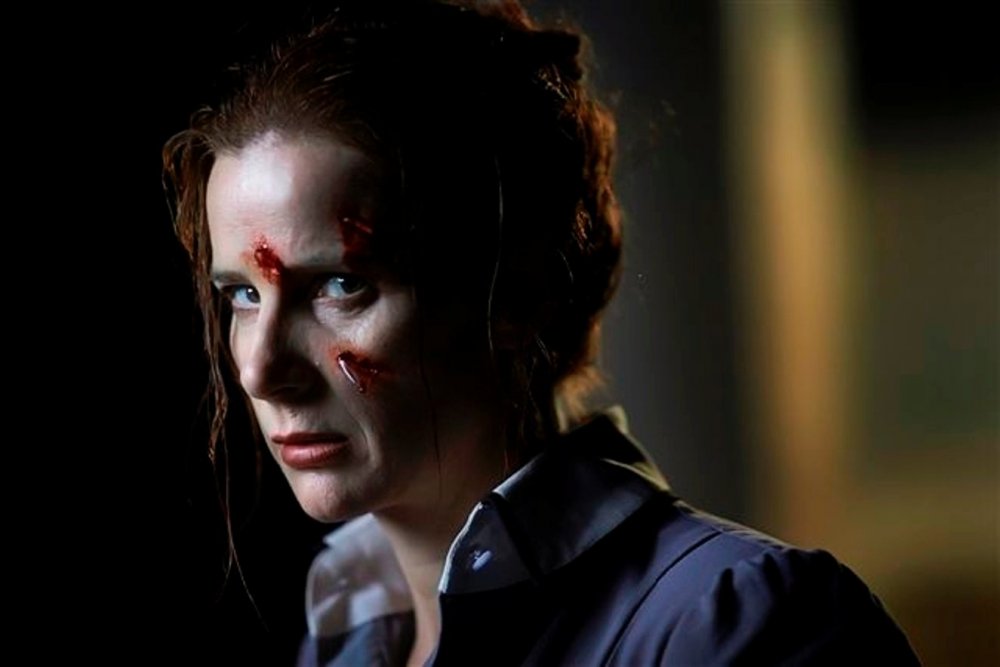 Retaining the scream-queen crown she held in recent FrightFest offerings Bait (2012) and You’re Next (2011), Sharni Vinson plays neurology graduate Kathy Jacquard, hired by Dr Roget (Charles Dance) and Matron Cassidy (Rachel Griffiths) to assist their unethical experiments, even as one of their coma patients, Patrick (Jackson Gallagher), shows signs that there is still plenty of spark in his angry, sexually possessive brain.

The presence of a smartphone in the opening scene signals the way Franklin’s original has been updated to the post-millennial age, but despite the use of CGI for its visuals, and the centrality of computers and internet searches to its plotting, in many ways Patrick feels like fun sub-Hitchcock schlock of a very traditional kind that has been left lying dormant for years.

Perhaps the biggest surprise of the night, living up to its title while still defying all expectations, was Canadian writer/director Renaud Gauthier’s low-budget feature debut Discopath, which looks back first to the New York of 1976 where introverted oddball Duane Lewis (Jérémie Earp-Lavergne) commits bloody murder on (or at least beneath) the dance floor, and then to the Montreal of 1980, where Duane is hiding out in, of all places, a Catholic girls’ boarding school.

Haunted by a childhood trauma that resurfaces every time he hears a funky riff, Duane carries out his absurdly gory set-pieces while two pairs of comedy cops from either side of the Americo-Canadian border incompetently pursue him through the signifiers of a lost decade’s worth of cinematic sleaze, all shot (by DP John Londono) with a distinctive 1970s grain, and scored (by Bruce Cameron) with toe-tapping synth rhythms. Discopath is not really about anything – but as an affectionate postmodern evocation of several kinds of scuzzy flicks, full of satisfying tonal dissonances and psychotronic excursions, it had the midnight audience wanting to get down and boogie to its wayward beats.

Come 5.45am, everyone is feeling a little drained, so it’s clever programming to end an all-nighter with a film called Nothing Left to Fear, even if perhaps this debut from Anthony Leonardi III (and the first feature to come from Guns N’ Roses guitarist Slash’s new production house Slasher Films) was perhaps too sombre and slippery a slow burn to reopen the eyes of more exhausted viewers.

As a family of five travels from the big city to the backwoods rural town of Stull where father Dan (James Tupper) is to take over the parish priesthood from local community leader Kingsman (Clancy Brown), the idyllic location quickly starts dripping with conspiracy and devilry. While the others settle into their new home, Dan’s eldest daughter Rebecca (Rebekah Brandes), plagued by dark visions, suspects something to be very amiss, and is not sure how much she can trust her sad-eyed new beau Noah (Ethan Peck).

The results are a far better remake of The Wicker Man (1973) than its official 2006 iteration, as well as a complicated discourse on the contradictions to be found in faith, superstition and the easy manipulation of both, making Nothing Left to Fear a timely reflection of the polarised ‘culture wars’ that dominate America’s political landscape. And, given the origins of Hallowe’en as a harvest festival, what better way to usher it in than with a good old pagan fertility rite like the one that unfolds here?