FrightFest 2010: looking back to giallo, and Tobe Hooper’s debut 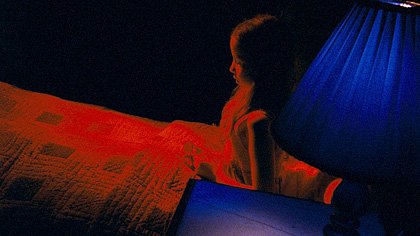 There are things you expect to encounter at a horror film festival, and things that you don’t. Certainly all the hallmarks of fandom are on display at FrightFest: geek T-shirt combat (winner for me was the ‘Civic TV’ logo from David Cronenberg’s Videodrome); zombie makeup; conversations about continuity errors in the last film (“that machete definitely moved several feet”) and the relative merits of different Star Wars novelisations.

Amer (2009) is a lurid love-letter to the 1970s giallo genre, penned in blood and sprayed with the perfume of the woman in black. Scripted and directed by French duo Helene Catett and Bruno Forzani, it’s a film of glimpses and gestures, blades and mirrors, signs and architecture, structured around a triptych documenting three stages in a woman’s life. And, naturally, her brutal death. Shot on video in the South of France, it’s a beguiling exercise in pathological synaesthesia, strung out, like the films it echoes, over a dream-like narrative that’s as thin as spider’s silk, and set to a soundtrack of sighs, whispers and baroque music borrowed from original gialli.

Equally abstract but entirely different in feel is Eggshells (1969), directed by Tobe Hooper, who followed it with the gruelling The Texas Chain Saw Massacre (1974). It’s a document of life – seen and unseen – in Austin, Texas during the late 1960s, when Hooper was the University of Texas’s sole film student and worked for the nascent, locally based PBS Television.

The film opens with footage of a large anti-Vietnam rally taking place on the university campus, in the shadow of the clock tower from which Charles Whitman had killed 14 fellow students three years earlier. Back in their shared home our longhair protagonists read beat poetry against a soundtrack of acid-fried country rock and echoing sitars, paint their naked bodies and make out as a band rehearses in their front room. They’re young and free and want the straight world to know it.

But there’s something else: like the clock tower, unease looms large; a psychic disturbance lingers just beneath life’s colourful surface. It’s present in the film as a constant sense of uncertainty: the knowledge that the dream, like youth, must fade. It’s an awareness that manifests itself as another occupant of the house – the ghostly presence of a puckish, ageless youth who is just as dazed, confused and frustrated as his co-habitants on the physical plane. As the film plays out, a window opens up between the two worlds, allowing the inhabitants on both sides to experience a taste of freedom. Some of the living make good their escape, following the ghost-boy into the void, while others marry and settle down to life within the fragile bubble of conformity.

An often dazzling palimpsest of youthful experimentation, Eggshells reveals a film-maker equally comfortable playing with visual ideas as he is with celluloid itself. There’s some enjoyably creative editing on display (in one sequence the sword-wielding ghost duels with himself), stop-motion animation of objects and images and a potent use of sound, light and colour. But the film is more than just an extended psychedelic showreel. Although the narrative is as free-flowing as the non-professional cast’s collective hair, the extended dialogues between the players often convey genuine tenderness and poignancy, infusing the proceedings with unexpected emotion.

Interviewed after the screening, Tobe Hooper, a man of few words, described Eggshells as a political film for politicised times and one that, while predictably well received on university campuses, wasn’t the industry calling card that he had hoped for. It would take Hooper’s infamous follow up to grab the world’s attention, and it’s ironic that without The Texas Chain Saw Massacre’s howl of satirical fury this fragile, enchanting film might never have been seen again.

‘Amer’ will be available on DVD from Anchor Bay and ‘Eggshells’ from Watchmaker Films in 2011.