Many of the best films at this year’s London horror festival reflect our uneasiest concerns about fake news and bad government – uncomfortable viewing for a turbulent age. 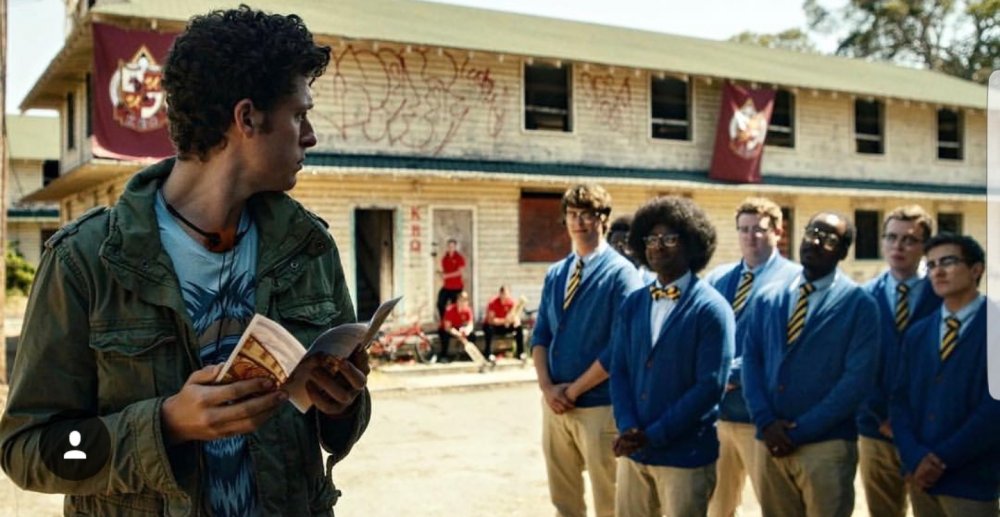 As the genre which most gets under the viewer’s skin, horror has to needle us at our points of greatest vulnerability. It is for this reason that horror’s on-screen fictions so often reflect very real anxieties that already exist in the viewer – not just deep-rooted, perennial fears of sudden loud noises or darkness or predation, but also more contemporary concerns about the world we live in, abuses of power, and our precarious relation to others. This is what might broadly be called the political dimension of horror, and explains why, for example, so many genre films in the late 60s and early 70s were informed by America’s civil rights movement at home or Vietnamese excursions abroad, or why ‘rage’ viruses and torture porn loomed so large in the post-9/11 era of mass unfocused anger and external rendition. Put simply, horror thrives in troubled times.

We are, of course, in the middle of a particularly turbulent age right now, as Trump’s occupancy of the White House, the creeping approach of Brexit, the rise of fake news and the manipulations of the internet, all spread uncertainty and consternation through the viewing public. So one might expect at least some of the 70 features screening at this year’s FrightFest, the UK’s largest festival of horror, science fiction and fantasy, to prod and poke at present political anxieties in their audience. Here is a selection of films from the programme, including my outright festival favourites The Witch in the Window, Tigers Are Not Afraid and Braid. I really like all nine of these titles for different reasons – but what unifies them is the dark, distorting mirror that each holds to situations and events in the real world.

The Man Who Killed Hitler and Then The Bigfoot 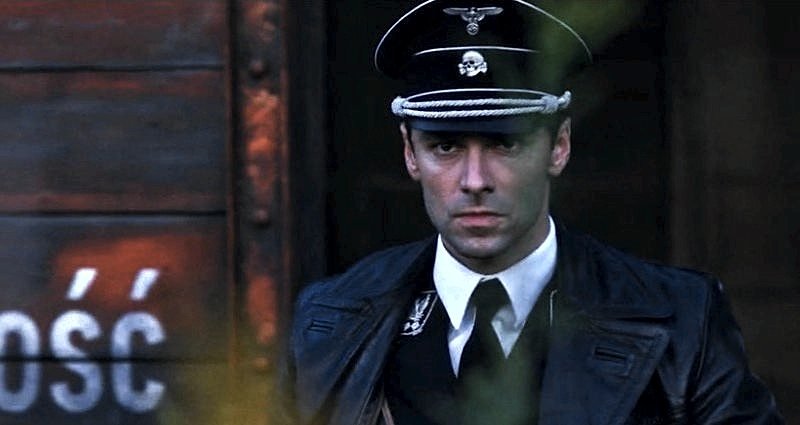 The Man Who Killed Hitler and Then the Bigfoot (2018)

Robert D. Krzykowski’s feature debut concerns ageing Calvin Barr (Sam Elliott) who, in the 1980s, lives a quiet life of regret for a secret solo mission that he executed towards the end of the Second World War, and for the high price that he paid at home. For Barr knows that Nazism did not end with Hitler’s assassination.

As the film switches between Barr’s present and his memories of the past, one scene sees a young Barr (Aidan Turner) chatting with schoolteacher and love of his life Maxine (Caitlin Fitzgerald), who tells him how a cheating, selfish braggart won a children’s war game.” A kid like that”, comments Barr, “grows up to be someone important, I think, like a boss in a factory or maybe the President…”.

This is a subtle, though unmissable, reference to the current Presidential incumbent, a narcissist who has lied, cheated and bullied his way to the top, and who is enabling neo-Nazi ideology. Barr, a mythic all-American hero, is a foil to Trump – and the film plays like a melancholic elegy for the old-world values of modesty, charm and decency which Barr embodies, but which are slowly dying along with him, if not quite yet dead.

Resurgent Nazism also features in Tommy Wiklund and Sonny Laguna’s reboot of the 11-feature Puppet Master series. Written by Craig S. Zahler (Bone Tomahawk, Brawl In Cellblock 99), the film opens, as the original franchise did, in 1989, before jumping to modern-day Texas, and ret-cons puppet master André Toulon (now played by genre king Udo Kier) from his previous status as a fugitive from Nazi Germany into a committed Nazi himself, waging a one-man (and doll-army) war of hate against the ordinary citizenry of Postville.

“I try to mirror reality in my work,” says unlikely hero Edgar (Thomas Lennon) of the comic books that he occasionally writes. The film too, for all its embrace of over-the-top gore, death by reanimated figurines and violent fantasy, is reflecting the issues of our times. For it is not difficult, in this vision of a sleeper horde of robotic puppets doing the fascist bidding of a remote master, to discern the outline of Tweet-meister Trump’s reawakened alt-right.

Writer/director/DP/editor Harry Lindley’s first feature is also concerned with the life that we increasingly live online, and the power that we readily cede to that wired existence. Here sociopathic hacker Leo (Julian Mack), his adoptive sister Lex (Saabeah Theos) and her boyfriend Dru (Hainsley Lloyd Bennett) become trapped together in an apartment as a virus that Leo has planted comes to life and takes control.

It is an ambitious, hallucinatory work, figuring the coming technological singularity as falling somewhere between an incestuous chess match, a Sartrean hell, Donald Cammell’s Demon Seed (1977) and an upgraded Bible (complete with Creation, insect plague and Virgin Birth). Like Giordano Giulivi’s The Laplace’s Demon (also screening at this year’s FrightFest), CTRL confronts us with the horror of a deterministic universe where we are all reducible to an uncannily accurate predictive algorithm.

Trevor Stevens’ debut is in part an exercise in pure genre, transforming the near-future campus of Rock Steady University into both a post-apocalyptic dystopia (with pushbikes replacing The Road Warrior’s gasoline as the contested resource) and a lawless oater town (where Heston Horwin’s fresher goes all Yojimbo on the two fraternities who between them have cornered the stolen bicycle market).

Yet despite its love of artifice and its heady spin on familiar tropes, Stevens’ film is also a satire both of America’s underfunded, overpriced education system and of an American populace at the mercy of the misogynistic collegiate bros in power. No coincidence, then, that the Kappa House jocks and the High Society nerds come dressed respectively in Republican reds and Democratic blues – although it is really the corrupt Dean (Larry Miller) who is pulling both their strings.

Set in a United – yet divided – Kingdom of the near future, Paul Raschid’s film is a literal chamber piece, confining all the complexities and contradictions of internecine strife to a single secret weapons research facility, and to the white-lit test/torture room within, where captives are pushed to and beyond the normal limits of physical endurance. With both sides of a vicious civil conflict equally convinced of their own righteousness and looking not just for mere victory but for personal, bestial vendetta, a time-leaping narrative structure interrogates the viewer’s prejudices, turning the tables on our moral orientation to reveal the double game that almost everyone here is playing. Meanwhile, those stuck in the middle who point out the unethical nature of others’ behaviour find themselves threatened with charges of treason. White Chamber is best seen in the context of a Britain that is currently riven by issues of class, race and (especially) Brexit, with everyone entrenched in their views, and no signs of acceptable compromise in sight. It grimly foreshadows a lose/lose situation.

As lovesick beautician Alice (co-writer Alexis Kendra) unwittingly becomes an object of strange infatuation for her burn-scarred cleaner Shelly (Rachel Alig), it is clear that this latest feature from Jon Knautz (Goddess of Love, 2015) is going to conform closely to the bunny-boilerplate of films such as Fatal Attraction, Poison Ivy and Single White Female, in which obsessive interlopers make the life of their designated targets hell.

Yet as a contrast is drawn between ‘perfect’, ‘Barbie’-like Alice with her luxury apartment, her disposable income and her entirely first-world problems, and Shelly, with her damaged face, her horrific family history and her menial, minimum-wage job, The Cleaning Lady is also a study of the insurmountable class divide between the haves and the have-nots in today’s America. For even when her wildest, most perverse fantasies involving Alice are finally fulfilled, Shelly’s exclusion remains foregrounded, as she continues to be positioned – and even to position herself – as forever on the outside looking in on someone else’s dolce vita.

The political nature of Mitzi Peirone’s feature debut rests, paradoxically, in the apolitical nature of its characters – three young women still playing the same games together that first damaged and bound them as children, and insulating themselves from the realities of the world beyond. Fugitives from the law, Tilda (Sarah Hay) and Petula (Imogen Waterhouse) return to the gothic mansion of their ‘fucking crazy cuckoo’ heiress friend Daphne (Madeline Brewer), where they are made welcome to stay provided that they resume their former roles – as Daphne’s daughter and doctor – and stick to Daphne’s three rules of play.

Those rules structure this trippy, tripartite three-hander, as the women’s increasingly perverse and demented menage à trois models the sort of nostalgic, arrested mindset (and elaborate cosplay) that many genre fans will find uncomfortably confronting, or – more broadly – the sort of blinkered conspiratorial delusion that is so easy to find in online political discourse. For this trio is living in a bubble of their own collusive fantasy, with no external input to puncture it beyond their own sense of frustration and existential panic.

Deeply disorienting, highly stylised and cruelly ludic to the end, Braid is set in the same sort of all-female fantasia where Věra Chytilová’s Daisies (1966), Albert and David Maysles’ Grey Gardens (1975) and Sofia Coppola’s The Beguiled (2017) unravelled – and shows disengaged, nostalgic escapism itself as something occasionally worth escaping. Ironically enough, it is a film which, like Daphne’s house, will be hard to resist revisiting.

Tigers Are Not Afraid (Vuelven)

When her mother disappears, young, imaginative Estrella (Paola Lara) joins a group of similarly orphaned street kids in a city that has been ruined by the dirty politics and criminal actions of Mexico’s drug wars. In this unspeakably predatory environment, writer/director Issa López filters Estrella’s bleak outlook through her fairytale imagination, presenting her struggles to survive and to retain something like innocence as an animistic quest narrative in a land littered with the ghosts of the dead.

Guillermo del Toro’s The Devil’s Backbone (2001) and Pan’s Labyrinth (2006) are clear influences here, but López’s particular stripe of magical realism is set very much in the present day. As Estrella bravely follows a slithering, snaking blood trail to her own destiny, Tigers Are Not Afraid allows the girl, and us with her, momentarily to entertain the fantasy that very real evils can simply be overcome. The results, depending upon how the viewer negotiates the relationship between the film’s palatable fictions and harsher truths, are either uplifting or devastating. Either way, this is unmissable.

The Witch in the Window

“I’m just trying to keep him safe, and I am all alone in this,” Beverly (Arija Bareikis) tells her estranged husband Simon (Alex Draper) about their 12-year-old son Finn (Charlie Tacker) near the beginning of the latest from writer/director Andy Mitton (YellowBrick Road, 2010; We Go On, 2016). “Up against the internet, random shootings, other people’s bad kids, the planet dying, and now this President.” The Witch In The Window uses its haunted house frame to imagine a way that, in Trump-era America, a good family life can be lived in a space safe from the nation’s more frightening sociopolitical realities. With adolescent Finn starting to transgress, Simon takes him away from New York and the internet for the summer, to a cheaply purchased old farmhouse in Vermont. With his son’s help, the lonely father hopes to fix up not just this dilapidated lakeside property, but also the ruins of his own home life. Yet the house’s previous occupant Lydia (Carol Stanzione), a witch-like widow who died on the premises, has never quite left, and as building progresses and her presence becomes more intensely palpable, Simon hatches a desperate plan to bring his own broken family back together again.

Mitton’s film never goes where you expect, while deploying its horror tropes to show the cracks and fissures in contemporary America’s nuclear family structure. Its ending, so poignantly bittersweet, is very hard-earned – but before that, prepare to be treated to some insidiously creepy home invasions (from the inside) that upend any notion of domestic safety.