Donald Trump’s chief adviser Steve Bannon made his financial fortune as a film producer – and his political fortune as the director of a catalogue of confused but delirious movie polemics that trumpet a fallen America awaiting a saviour. Celluloid Liberation Front watches another smashing of the line between fact and fiction. 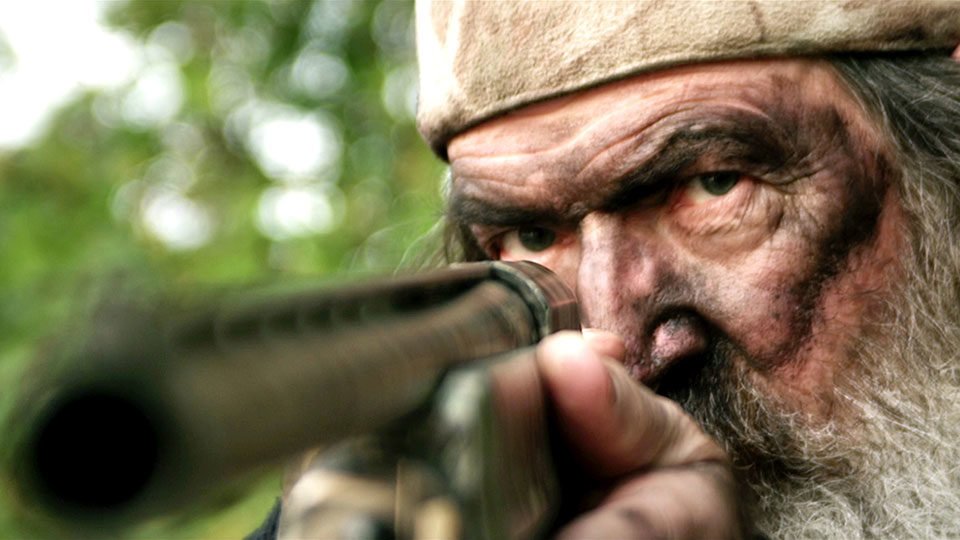 Steve Bannon’s CV would allow him to pass as a member of the ‘coastal elite’ he so adamantly deplores. The White House strategist-in-chief is a Harvard graduate who made a small fortune in royalties from the TV series Seinfeld and also worked for Goldman Sachs – though his confessed admiration for Dick Cheney, Darth Vader and Satan does set him slightly apart. He is also known for having written, produced and directed a series of rightwing documentaries.

Joshua Green’s book Devil’s Bargain: Steve Bannon, Donald Trump, and the Storming of the Presidency (Penguin) is out now.

Like any self-respecting auteur, in these movies Bannon created a world. A world where dark clouds loom at the horizon and history is not considered as a consequential continuum but a mere provider of self-contained episodes. By selectively choosing certain historical passages and omitting others, Bannon is able to construct wishful narratives where cause and effect are arbitrarily linked. A world where New York Times journalists support the nihilistic destruction of American civilisation, and so did President Obama. In his fuming documentaries, strings are perpetually climaxing and what Bannon calls a “kinetic” style consists of images edited together at migraine-inducing speed. The vengeful triumph of resentment that Donald Trump’s campaign so cleverly channelled is inscribed in every frame of Bannon’s documentaries, chronicling a submerged America whose existence and grievances the liberal establishment completely ignored for decades.

It was in 2010, with Generation Zero, that the US President’s future chief strategist fulfilled his authorial vocation and became a documentary filmmaker, having executive produced Sean Penn’s directorial debut The Indian Runner (1991) and helped to fund and distribute an unlikely handful of others, including Todd Solondz’s Palindromes and Vincent Gallo’s Brown Bunny.

Watched today, Bannon’s first feature documentary shines in all its prescient, conspiratorial delirium. Not because any of it feels truer than it did seven years ago, but simply because all of its untruths became post-truths and its made-up facts turned into alternative facts. In a media landscape that affords us individually tailored versions of reality validated by our social media feeds, Bannon’s films are just another possible account of the world. 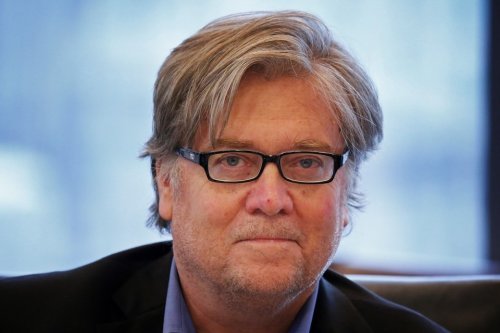 For instance, in Generation Zero the 2008 financial crisis is not one of the cyclical deadlocks to which capitalist accumulation leads us, but the result of the left having infiltrated American institutions. Baby Boomers and the Woodstock generation, Bannon explains to us, have grown to be the new ruling class, bringing the lazy and dangerous ideologies of their youth with them to the corridors of power. Bannon backs his voiceovered argument with images of the Black Panthers and the American Communist Party, whose vile and violent ideals have made their way into the White House, ultimately causing the financial crisis – or at least so we are assured.

A spectator with no knowledge of American history could finish a Bannon documentary believing America is run by a sect of leftwing lunatics bent on the destruction of the capitalist system. But there is a solution to all this moral and political degeneracy, which Bannon has variously identified as “constitutional conservatives” (in Battle for America, 2010), Sarah Palin (in 2011’s The Undefeated) and God (in The Torchbearer, 2016).

What’s curious about these supposedly sympathetic portraits of America’s saviours is that they are painted in the same apocalyptic tones as those about America’s supposed enemies. The end is always near and the time for a thoughtful, articulate discussion is running out, which leaves us with Bannon’s instructions for salvation as the only available option.

In Occupy Unmasked (2012) the degree of conspiratorial hallucination reaches alarming, if hilarious, heights. The only reason why the Occupy Movement took off, Andrew Breitbart tells us, is because the organisers had the cunning idea to spread the hoax that Radiohead would have played Zuccotti Park for free. Then the Labour unions brought in their fake, hired activists to carry out Occupy’s true goal: mass rape and the destruction of American civilisation.

The spiritual father of all this mayhem is Saul Alinsky, a community organiser, hardly a subversive radical, whose main fault, it seems, is to have been the subject of Hillary Clinton’s senior thesis when she was a political science major at Wellesley College. Alinsky is a recurring character in Bannon’s documentaries, though the connection between his ideas about grassroots organising and the capitalist oligarchy that the Clintons and Obama have presided over is never really explained. In Bannon’s documentaries, the concentration of wealth in the hands of relatively few individuals, which neoliberalism has championed and achieved over the past 30 years, and the Marxist precept of wealth redistribution, are logically consequential.

Bannon’s cinephile credentials are rightwing too. His 2012 documentary about disappointment in Obama, The Hope and the Change, has the same exact opening of Leni Riefenstahl’s 1935 Nazi propaganda ‘classic’ Triumph of the Will. “You’re the only one that caught it,” he applauded Patrick Caddell when the latter pointed it out.

The son of a working-class Virginia family who served in the navy before hitting Wall Street and then on to Hollywood, Bannon seems to be driven by the sometimes fanatical determination of those who are not born into privilege. His natural talent is for business, and in Hollywood he was far more successful as a producer than as a director.

Given this, it’s hard to tell whether Bannon himself believes in everything his documentaries expound or whether he is just another political entrepreneur seeing new opportunities in the current climate. What is certain is that, for all his rhetoric about the average American left behind by the system, he is very much part of a powerful elite determined to overcome the Republican and Democratic traditions that have dominated American politics. Even his prominence within Trump’s inner circle seems to be a concession to the Mercer family, rather than the president’s preference. The Mercer Family Foundation, as well as being the third biggest funder of the Trump campaign and a main stakeholder in Breitbart News, gave nearly $3.6 million between 2012 and 2014 to Citizens United, the nonprofit organisation that produced most of Bannon’s documentaries.

The Hope and the Change trailer

If Bannon’s latest documentary is any indication of the values that will guide and inspire the Trump’s administration, then the theocratic roots of America are in for a big revival. In The Torchbearer (2016) Bannon hands the microphone over to Phil Robertson, Christian evangelist and reality TV star of the extremely popular show Duck Dynasty. The film opens with audio snippets of media pundits disparaging Robertson over his homophobic remarks, evincing an ill-concealed superiority complex disgusted more by his scruffy appearance than his prejudices.

The latter are given ample space throughout the documentary, which sees Phil Robertson going through the history of Western civilisation to conclude that “a human civilisation’s best chance for survival is to anchor itself in the God of creation.” Centuries of scientific discoveries and philosophical enquiry are erased as Robertson summarily comments on episodes of history. Ancient Rome and its empire of debauchery are the equivalent of contemporary New York City; Friedrich Nietzsche and his godless philosophy are responsible for Auschwitz and the horrors of the Holocaust (someone perhaps should let him know that the Nazis were fervent Christians).

“You see, tyranny is humanity’s answer to anarchy, both come with godlessness and therefore are defined by atrocities,” he ponders. As for the hippies, their legacy is no less nefarious since “make love not war,” in Robertson’s singular view, has become “love is dead but we still have war.” Puzzling as they may sound, his convictions are not confined to his personal understanding of religion, but extend to the whole of society. “The ultimate check on the power of the state is God’s teaching as seen in the moral character of his people,” Robertson claims, echoing the beliefs of other theocratic enthusiasts such as the Ayatollah Khomeini.

Though stylistically less frenzied than its predecessors, Bannon’s latest directorial effort is no less scary. The protagonist of the documentary and its embrace of Christian absolutism, nativist values and ultra-conservative views are the emblem of an America left untouched by secularism, where an educational system worthy of an under-developed country has maintained a frightening level of ignorance.

This America, which Edward Kienholz so accurately immortalised, was created by neither Trump nor Steve Bannon, but is the outcome of a political system that has cultivated an abysmal difference between its expensively educated elite and the rest of the country. Forgotten by the political forces that should supposedly represent them, they have found a deceitful spokesperson in the shape of Trump.

Much of what Bannon’s documentaries say about the bankruptcy of the liberal establishment is sadly true; it is only the reasons he adduces that are preposterous. The simplistic and reductive dialectics with which Trump’s strategist-in-chief describes the world are not so different from those of Michael Moore (whose work Bannon indeed admires). If millions of ordinary American have let themselves be conned by Trump’s promises it is because every alternative to the tyranny of neoliberalism has been discredited in the eyes of the public. The inability to analyse the structural dynamics of a system that has turned profit and competition into an existential project is the precondition for Bannon’s delirious filmmaking to thrive.

The literary collective Wu Ming define a toxic narrative as “a story that is told always under the same point of view, in the same way and with the same words, omitting the same details and doing away with any complexity or context”. Repetition and oversimplification are indeed among the salient characteristics of Bannon’s documentaries. Complex phenomena and problems are prescribed easy solutions, which are often an integral part of the original problem. There is no real distinction here between fiction and documentary.

The cinema of Steve Bannon stems from and is part of a thriving conspiracy culture that has gained mainstream recognition via Fox News, especially since Trump’s election, having previously dwelt in the densely populated catacombs of the internet. It is the lack of a shared narrative that makes any unsubstantiated opinion look like a valid-sounding argument which is usually reverse-engineered to its own (il)logical conclusions.

It would be a mistake to consider this new cultural and political paradigm, of which Bannon’s films are mere symptoms, as an alien phenomenon. Far from being a marginal recrudescence of world cinema, his documentaries are the repressed demons of a documentary practice struggling to relate to reality or at least chronicle its disappearance from our screens. That Bannon’s toxic narratives have self-validated themselves says more about the tragic lack of counter-narratives than it does about their original effectiveness.