The great escape: ten of the best at Sci-Fi-London 2017

Whether flying to the stars or simply getting out of your skull, this year’s festival offers several opportunities for a virtual getaway. 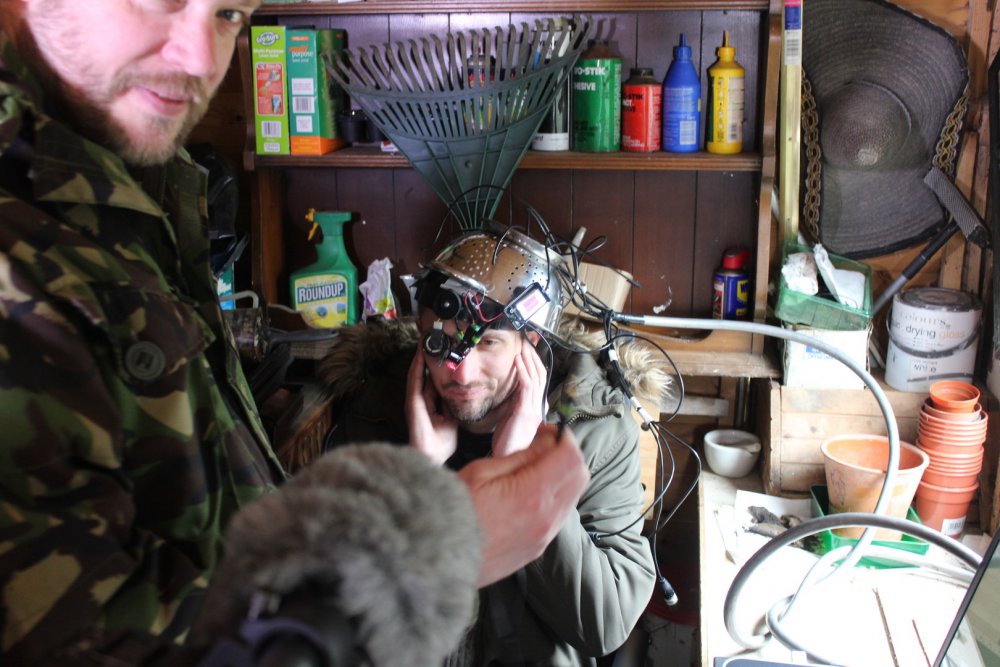 Transcend this: Roger Armstrong and John Hickman’s dark post-techno mockumentary Sublimate sends up the nostalgia of a benighted modern Britain

Science fiction can do many things: run speculative thought experiments, stage humanity’s encounters with otherness, explore the outer limits of knowledge and imagination and use the future (in much the same way that period narratives use the past) to allegorise and defamiliarise our present concerns.

It is also very often a genre of escapism, enabling us to disappear for a brief time to somewhere at a remove from our immediate problems. Accordingly, both traps and escape are dominant themes that can be traced through the selection of features programmed in this year’s Sci-Fi-London.

Domain presents a strange form of confinement whose inmates have, at least at first, no motivation to escape. Lucky survivors of a highly infectious and deadly global pandemic, they live alone in isolated bunkers, but are connected (via a digital network known as ‘the Domain’) in chat groups of seven to ensure their psychological and social wellbeing is maintained over the years it will take for the world above to become safely habitable again. Yet after six years of this solitary existence, relations between our heptad of quasi heroes (each nicknamed for their American state of origin) have become frayed, and as the system keeping them alive starts to glitch and break down, they begin wondering just who their remote companions really are, and what truly lies outside.

There is of course a twist, but along the way, there is a decidedly existential flavour to the film’s preoccupation with infernal routines and the hell of other people – and in case the point is missed, one of the characters prominently reads a well-thumbed copy of Jean-Paul Sartre’s No Exit. It is also a film which understands full well that strange mix of horror and relief that comes with being blocked from a social network.

As heroine Frances (Laura Swift) must work out how she came to be trapped in an underground labyrinth with other, similarly amnesiac soldiers and scientists, as well as with a host of blind but brutal creatures, Matt Mitchell’s closing night film confounds the trappings of SF, mystery and horror. Unfolding in 1955, this is an alternative English occult history of the Cold War, full of mad scientists, demonic monsters, human sacrifices and pan-dimensional portals, as human lab rats find themselves locked in ancient Lovecraftian conflicts from which there can be no easy escape. The period setting (and Swift’s doughty performance) convert Frances’ proto-kickass tendencies into pure Blitz-spirit pluck, and ensure that all the film’s wilful corniness comes with nostalgic charm. The fulsome gore, though, belongs to a different era.

If those two films concerned literal attempts to escape confinement, in the next two, the only prison present is the science-fiction genre itself, whose conventions and clichés prove difficult to evade.

Space Detective offers postmodernism on a planetary scale, advertising its own artifice through its rotoscoped imagery, neither quite real nor entirely animated. As ‘Terran’  Private Dick Shiro (co-writer Matt Sjafiroeddin) is knowingly seduced by feline femme fatale Jinks (Angela Rysk) into taking a dangerous space case, the characters and scenarios around him are constructed from a dizzying assemblage of Easter egg-like references to countless other SF films, or to other kinds of film and television that are here reduced to SF, while the boundaries of his genre are adumbrated (in another SF cliché) with the tropes of film noir. The narrative’s pseudo-serial form, with its closing promise that “This isn’t over – Shiro will return”, marks the world of Space Detective as closed, yet unbounded and infinitely extendible. This film’s brand of allusive SF does not just eat itself, but seemingly everything else as well.

Duvert’s feature debut meanwhile uses SF cliché to different effect. For as slippery agent Nash (Mike Dopud) navigates his way through a technologically driven future where a large proportion of the populace is permanently plugged into immersive virtual worlds (built upon tropes of fantasy and combat readily recognisable from multiplayer online games and films), his own ‘real’ world (a stylised Paris) is so overtly and slavishly modelled on that of Blade Runner (1982) that Duvert is able to suggest (without ever quite stating as much) that perhaps Nash too is plugged in all along, ExistenZ-style – a willing prisoner of a virtual system where escapist fantasies are all just part of the game.

Set in Oxford, and transporting the rabbit-holes, caterpillars and little girls lost of Alice in Wonderland to the cutting edge of science, Keir Burrows’ feature debut Anti Matter retraces the looping steps of young Spanish chemistry postgraduate Ana (Yaiza Figueroa) who accidentally invents a teleportation device, and then becomes her own worst enemy, trapped in the unintended consequences of her pioneering trip(s) through a wormhole. Touching on issues of memory and its loss (like her late father, Ana is suffering a kind of amnesiac dementia), Burrows’ story keeps winding and meandering back to the same point – and the same locked laboratory door – as Ana attempts to remember what has happened and to reconstruct her fractured identity. The results are paranoid and disorienting, if also – necessarily – rather repetitive.

With other titles at the festival, time itself is the trap. In both Diverge and Yesterday Last Year – the former a post- (and pre-) apocalyptic drama set around a plague-devastated New York, the latter a love triangle unfolding mostly, Primer-style, in a garage – characters travel backwards through time. Their hope is to fix the past, but they are made to realise that, no matter whether their time-travelling is viewed as a traversal of multiple alternative realities or as a staggered journey through a fixed circularity, they may after all be stuck, in one way or another, with what has already happened to them.

Both these titles shared with Rob York’s impressive debut an interest in the conflict between love and labour. For all three films feature male protagonists whose working lives take a toll on their domestic relationships – and in the case of Magellan, they take solo astronaut Roger Nelson (Brandon Ray Olive) literally years and planets away from his beloved wife (Abigail Nelson) on an increasingly obsessive quest for alien contact. With compromised on-board AI his only companion, and the next evolutionary leap of humanity his aspiration, Roger’s interplanetary adventures are clearly influenced by 2001: A Space Odyssey and Interstellar – but the film remains equivocal as to whether Roger’s outer-space excursion is an audacious endeavour in the service of earthly affairs, or an irresponsible evasion of them.

The End of the Lonely Island

One of my two favourite offerings of this year’s Sci-Fi-London, The End of the Lonely Island shares with Magellan a pair of lovers who are pioneers, respectively, in the fields of artificial intelligence and space travel, but is different in every other respect. It is that rare beast, a Chinese indie SF – and although it runs at just over an hour, it packs into that brief duration multiple storylines of isolation and escape that all unfold in parallel timeframes on the same remote, abandoned island.

There, where years earlier Lin Xia (Xi Liao) had camped out with her boyfriend Zhi Yuan Fang (Duo Duo Tian) and shared stories about its peculiar history, her own sense of professional failure and her notion of their future together, she now races against disease and an armed militia to save humanity from total extinction. Depicting us as a species buffeted on all sides by arbitrary mortal perils, and yet managing to remain semi-optimistic about our prospects, Wang’s film subjects this island Earth to historical, philosophical and allegorical analysis, and the result is a nuanced, Asimovian account of survival in crisis as the only kind of progress.

Sometimes escape can be less from danger or death than merely from the mundane. Brad Abrahams’ documentary Love and Saucers offers a multi-faceted portrait of its subject David Huggins, a 72-year-old ‘outsider’ artist whose paintings obsessively illustrate the encounters (many of a graphic sexual nature) that he claims to have had with aliens since he was a child.

Those who want to believe in extra-terrestrial intercourse will no doubt swallow his story whole, but it is also possible to regard Huggins’ elaborately fanciful mythology as a carefully constructed refuge from childhood abuse – a notion that will be familiar to anyone who has seen Gregg Araki’s Mysterious Skin. What ensues is an ambiguous picture of a man who has embraced otherness as the ultimate escape from earthly concerns.

My other favourite film of the festival is an ultra-low-budget, DIY found-footage film about the making of an even lower-budget DIY film, in which a hired camera operator (Alistair Cummings, also co-writer and the actual DP) documents the activities of middle-aged, unemployed, live-at-home loser Roger Armstrong (played by Armstrong) and his best friend John Hickman (played by Hickman). At first Roger claims to be producing a “20 years in the making” techno album that he hopes is “gonna uplift the scene” and “change everything” – but then he rediscovers a specific synth tone, conjured from his acid house past, which he believes can be harnessed to “allow the human consciousness to leave the body and to, like, transcend to the next level”.

From here on in, the hilarious banality of the film takes a more sinister turn, as Roger finds various human guinea pigs on whom to test the tone, with messily fatal results – and so this musical mockumentary becomes something more akin to the serial-killing reportage of Man Bites Dog. Vainglorious, bitter, racist and not a little unhinged, Roger ‘sublimates’ his victims with psychotic glee – but at the same time he genuinely longs to transport them, and himself, above and beyond the succession of “shit jobs”, Gumtree barter and general drudgery that have defined his Newcastle subsistence ever since the Second Summer of Love – and with it his glory days – came to an end back in the early 90s. Here the analogue sounds of Roger’s drug-addled youth are the only escape that he can find from the absurdly miserable reality of contemporary British life – even if he retreats into a kind of nostalgia that is deluded, destructive, even deadly.

Obviously made for peanuts, Sublimate never stops laughing at its protagonist and itself, while painting a grim picture of the sort of parochial neglect and despair that has made Brexit possible. Roger’s backward-looking flights of fancy represent escapism at its most bleakly funny.