The annual horror movie marathon may no longer be an after-hours affair, but this year’s selection offered many films obsessed with bedtime and the fear of things that go bump in the night.

Bed is the place for conception, for sleep, for dreams (good and bad). It was also the one place to which, throughout FrightFest’s previous Hallowe’en events, you simply could not go. From 2006 to 2014, this annual event was an all-nighter, dealing out its dread and delirium from dusk ‘til dawn – and while some participants certainly snoozed through the later proceedings, such slumber was typically a fitful, nodding affair, confined to the small, mostly vertical space of one’s allocated seat, surrounded by the sound of things going bang in the night.

Bed of the Dead

Following the innovations of 2015, this year’s morbid marathon once again took place well in advance of Hallowe’en itself, at the Prince Charles Cinema (FrightFest’s first home) off Leicester Square, and was an all-day affair, its showcase of six features and sundry extras ending – rather than just getting started – at the witching hour. Yet, as though in commemoration of the event’s original all-nighter status, the opening film was Bed of the Dead, in which two couples spend the night together in the private room of a sex club, only to find that getting out of the cursed wooden bed there leads to a grisly doom.

It is impossible to watch Jeff Maher’s feature debut without also thinking of George Barry’s first (and only) film Death Bed: The Bed That Eats (1977), a cultish obscurity in which a demonically possessed bed digests those who lie in it, while a man trapped in a painting must bear eternal witness to its acts of consumption. Opening in 1910 as a tree used for human sacrifice is cut down and fashioned into furniture, Maher’s film, like Barry’s, embeds its contemporary scenario into a more timeless story, while boasting much freakish psychedelia and an irrational manipulation of spatio-temporal norms.

Yet as morally compromised police detective Virgil Carter (Colin Price) finds himself racing to prevent, through paradoxically retroactive intervention, a bizarre bedroom massacre that has already happened, the screenplay (by Cody Calahan, writer-director of Antisocial, Let Her Out) introduces a voguish element of psychology, with each character’s criminal backstory returning to disturb their forced lie-in. For in this bed, guilty nightmares not only haunt but also kill the evening’s slumberers. When Carter’s long noirish night comes to an end, we are left to sleep on the film’s ethical (indeed, ‘Biblical’) implications.

Also beginning with a bed, and also concerned with the moral nexus of action and consequence, is Don’t Hang Up, the directorial debut of effects men Alexis Wajsbrot and Damien Macé. The sleep of Mrs Kolbein (Sienna Guillory) is interrupted at 3.23am by an alarming phone call that purports to be from the police – but is in fact from a group of adolescent pranksters who further humiliate their victims by playing the calls out live online. Some time later, two of those pranksters, ‘bros for life’ Sam (Gregg Sulkin) and Brady (Garrett Clayton), are in the middle of more mischievous dialings when they get a call from ‘Mr Lee’ – a mysterious man who definitely has their number, and is altogether more determined and better prepared than they for what will follow. Their efforts to outwit him will soon become a struggle for their own and their loved ones’ survival, with each action that they take having effects that are not immediately grasped.

While savvier viewers will be at least half a step ahead of the many twists and turns in Don’t Hang Up, they will be rewarded with the pleasure of recognition, as a new (and, to a degree, sympathetic) brand of horror villain recombines elements from Scream (1996), Saw (2004), Compliance (2012) and Cheap Thrills (2013) – while another low-budget genre filmmaker lends his name to our ‘hero’ Sam (expressly surnamed Fuller). Best of all here is the combination of the directors’ VFX work and Nat Hill’s mobile cinematography, sinuously gliding the camera not just up, around and inside Sam’s two-storey suburban home but also – ‘impossibly’ – through a keyhole, through closed windows and even through a camera’s viewfinder. Even if the game-playing manipulation of ‘Mr Lee’ seems familiar from many other films, it is presented with real craft – and the moral commentary on the disconnect between online activity and real-world repercussion is very much of the now. 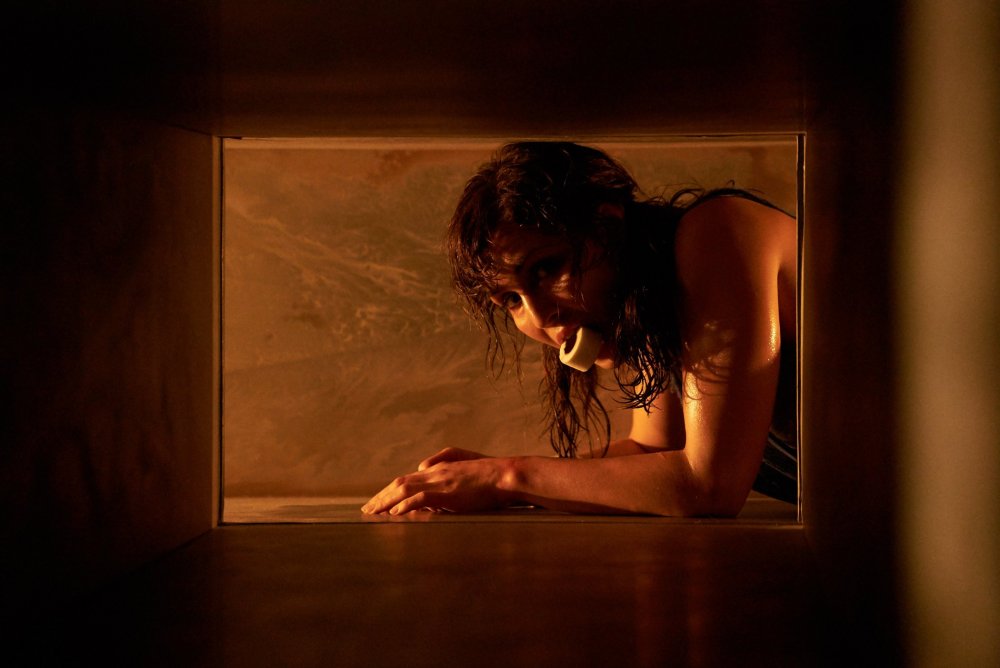 A bed (of sorts) also plays a central role in Steven Shainberg’s Rupture. As suburban mother Renee (Noomi Rapace) negotiates all at once a difficult split with her husband, the growing pains of her teen son Evan (Percy Hynes White) and her own pathological fear of spiders, she finds herself suddenly abducted by a shadowy group of professionals and strapped to a metal gurney in an isolated, low-lit building. Immobilised, she (and we with her) must work out why she has been targeted, what torment her captors have in store for her and whether there is any chance of escape.

While flirting with the tropes of ‘torture porn’, Rupture in fact sees Shainberg altering and adapting the SM genes of his earlier film Secretary (2002) to SF. Here Renee must find her own tightly constrained independence within a closed, paternalistic system of (body) fascism where Big Brother is always watching, and where Room 101 has been updated. It is an evolved nightmare of patriarchy, where a woman (part Rapace’s Lisbeth Salander from The Girl with the Dragon Tattoo, part her Elizabeth Shaw from Prometheus) must not only conform to others’ expectations of her, but face being regularly told it is a matter of her own choice, and for her own good. Ironically, though, it is the scenes where Renee has escaped her confinement to bed that feel, with their endless crawlspace crawling and corridor creeping, the most heavily padded.

Directed by Indonesia’s shockmeisters ‘the Mo brothers’ Kimo Stanboel and Timo Tjahjamto (Macabre, Killers) and starring silat supremo Iko Uwais (The Raid, The Raid 2), the amnesia thriller Headshot, which closed the FrightFest event, ought to offer non-stop, over the-top action. Yet while there is certainly plenty of that, the film is bookended with scenes in which Uwais’ blank-slate hero ‘Ishmael’ is comatose in a hospital bed. This tension – between highly kinetic action and patient stasis – governs events in the film, as a heavily scarred young man, washed up on a beach with a bullet in his brain, must face the extreme violence of his past, even as he struggles to be reBourne as a person of peace and love. 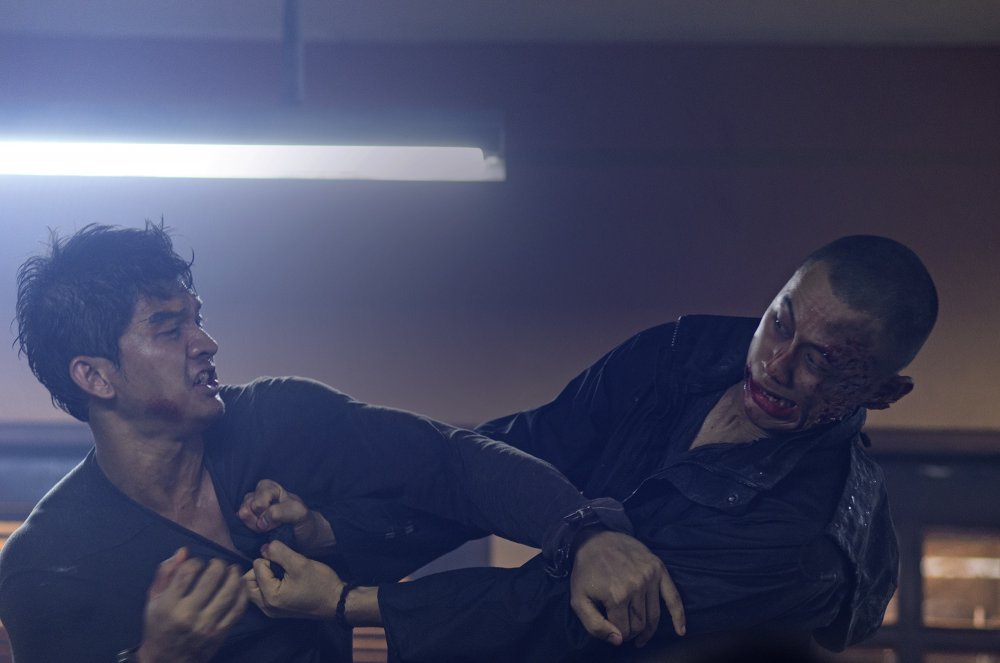 While, with her caring bedside manner, young, Melville-reading doctor Ailin (Chelsea Islan) holds out the promise of a different, better future for ‘Ishmael’, his past is embodied by adoptive father – and vicious crime lord – Lee (Sunny Pang) and his ruthlessly brutalised, hyperviolent ‘children’. Viewers who come to this for the fights will not be disappointed, as the Mos dish out plenty of bone-crunching biffo (partly choreographed by Uwais himself) and bloody gunplay. But there is also on offer an allegory of Indonesia’s troubled quest for a new identity as it still emerges awkwardly from decades of oppressive ‘parenting’ under dictatorial president (and ‘Father of Development’) Suharto. And a strong streak of sentiment humanises the film’s nasty excess.

Not every film at the event was bed-based. Griff Furst may be best known for his prolific acting career, and for helming some shark-oriented schlock for SyFy, but his latest feature Cold Moon is a deadly serious piece of southern gothic, drawn from a 1980 novel (Cold Moon Over Babylon) by Michael McDowell. In 1989, in the sleepy Florida town of Babylon, teenaged Margaret (Sara Catherine Bellamy) is murdered by a masked assailant, and her corpse is discovered weighed down under the bridge leading from town to the blueberry farm of Margaret’s distraught grandmother Evelyn (Candy Clark) and Margaret’s older brother Jerry (Chester Rushing). Although the local police have few clues, a dream reveals the killer’s identity to Evelyn – and Furst makes it clear that her suspicions, albeit intuitive rather than evidential, are entirely accurate.

From here on in, Cold Moon charts the murderer’s descent into drunken delirium, as he is haunted by the ghosts of his victims – or is it just by his own guilty conscience? Furst’s (maybe) supernatural tale unfolds in a manner that, without exactly breaking any new ground, makes the most of its backwards-looking classicism with a story that is similarly entombed in the past while looking forward to our present day. For at its centre is the intergenerational conflict of a banking dynasty, spanning the gap between an old, rural America of homespun honour and community values, and the more cutthroat, corrupting venality of today’s economy.

The calibre of this year’s films was very good – which is some achievement given the sheer number of genre titles that had already been screened at FrightFest’s main August event. For me, however, there were two real standouts, both at the more comic end of horror’s spectrum. Matthew Holness’s short film Smutch concerns a megalomaniac, pedantic novelist (Holness himself, in hilariously odious form) whose tea-induced diuresis pits him against the dyslexic spirit of the title – which comes with its own literary aspirations. The results, which lovingly literalise both piss-taking and ghost-writing, involve one unpredictably surreal incident after another.

My film of the day was Vincent Masciale’s feature debut Fear, Inc.. Here jaded horror fanatic and all-round slacker Joe Foster (Lucas Neff) ignores the warnings of his girlfriend Lindsey (Caitlin Stasey), his childhood Ben (Chris Maquette) and Ben’s wife Ashleigh (Stephanie Drake) to sign up with a company that provides ‘customised’ horror experiences for its clients – only to find himself under attack late Hallowe’en from a group of walking, breathing genre clichés who may (or may not) be genuinely trying to kill him and his loved ones.

Fear, Inc. understands its audience all too well, and treats them with knowing references to everything from Scream to The Shining and from Saw to Friday the 13th, all the while letting its genre-savvy characters provide a not-always-accurate running commentary on what ought to happen next.

In so doing, this meta-horror stages the processes involved in crafting effective genre thrills: working with familiar tropes, while giving them just enough of a twist to create the unexpected. In showing Joe’s escalating joy (at least up to a point) as his situation grows ever more horrific, the movie nails the contradictory mindset of the horror viewer, while hilariously double-, triple- and quadruple-bluffing the reality effects that lovers of scary movies crave to give their horror ‘edge’. For if Fear, Inc. is – maybe – like The Game (1997) for fright fans, then the fact that the characters make that comparison explicit will immediately prompt viewers to doubt it – and doubt generates the tension where real horror, and real humour, make themselves right at home.

And so we all dribbled out into the night, with the words of the sex club owner from Bed of the Dead still echoing in our heads: “I may be freaky, but I sleep fine at night.” It is the perfect summation of how one feels after attending an all-day horror event such as the Hallowe’en FrightFest.