Peele’s comic-horror follow-up to his hit Get Out makes hay with a scenario of our other half rising.

☞ Jordan Peele on Us: ‘I knew I was gonna forge new ground in the pantheon of doppelganger tales’ 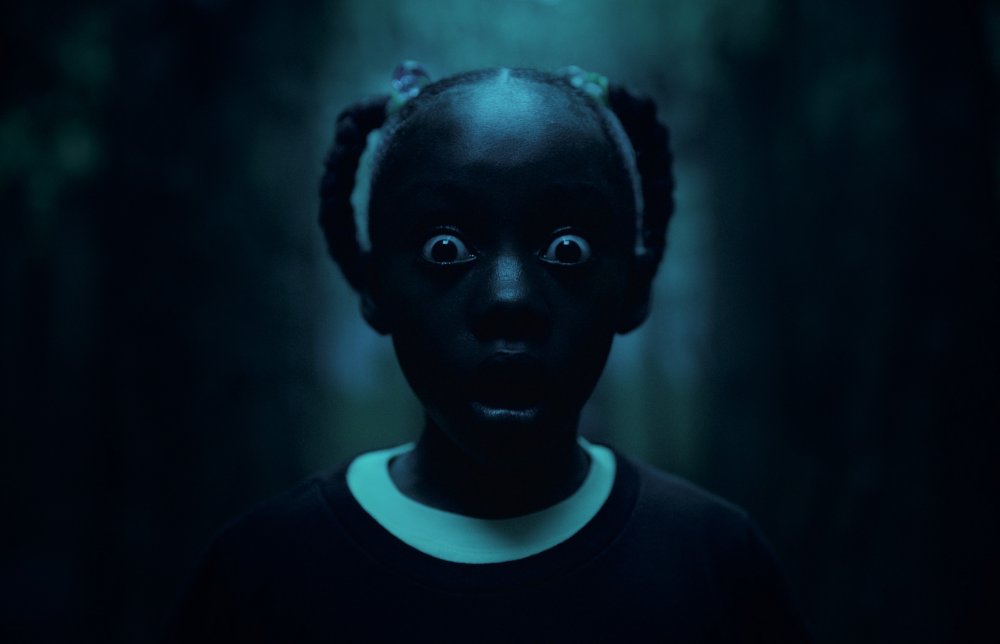 Madison Curry as young Adelaide in Us

With Jordan Peele’s reanimated The Twilight Zone series soon upon us, it’s fitting that he cites one of the cult TV show’s original episodes, Mirror Image, as inspiration for this follow-up to his Oscar-winning debut Get Out. Mirror Image featured a woman menaced by her physical double, another manifestation of a tried-and-tested horror trope, the dopplegänger. From Jekyll and Hyde to the somnambulant alter ego of The Cabinet of Dr. Caligari, through Sisters’ psychotic twin and Invasion of the Body Snatchers pod people, these shadow versions serve as canny metaphors to explore hidden desires and darker impulses. Peele is both cinephile enough to reflect those that came before him, and sufficiently smart and savvy to create his own unique mythology, the Tethered.

Trailers for Us suggested a home-invasion thriller along the lines of Funny Games or The Strangers. But where Get Out was largely confined to the opulent house and grounds of the pseudo-liberal, bodysnatching white family out to get black hosts, Us expands, eventually, to encompass an entire country. It maps a broader, bolder canvas than Get Out’s streamlined slavery analogy. Peele is flexing his filmmaking muscles here, and regularly cross-cuts fields of action, from the various family members fighting their vengeful doubles to a climax that elegantly executes an elaborate dance between different time periods and worlds. Accordingly, its ideas are a little harder to pin down, more open to interpretation.

Clues and allusions that pay off later are layered in from the very first scene. Young Adelaide watches a TV commercial for the 1980s charity initiative Hands Across America, which enlisted some 6.5 million people to form a coast-to-coast human chain to highlight poverty. This striking image is brilliantly repurposed in the film’s stunning final shot, a disenfranchised underclass rising up in solidarity. Earlier, a terrified Adelaide asks her alter-ego apparition Red who she and her fellow Tethered invaders are; Red’s answer, in a guttural rasp with a rictus grin, is “We’re Americans.” Us: literally, the US. 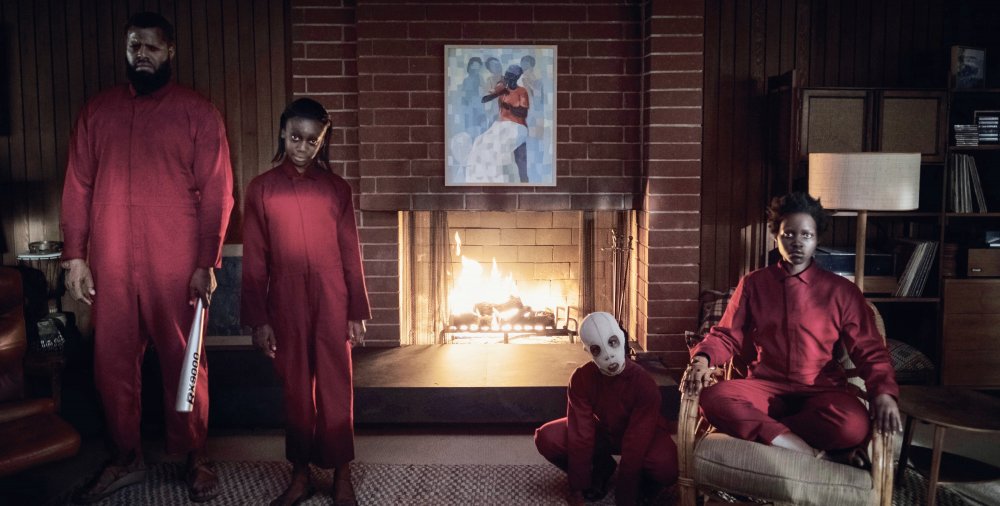 Winston Duke, Shahadi Wright Joseph, Evan Alex and Lupita Nyong’o as the Tethered family in Us

It’s a more inclusive critique, then, than Get Out’s post-racial takedown. Peele addresses race mainly through presenting, without comment, a well-to-do black family as his protagonists: Adelaide, her husband Gabe and their children Zora and Jason. Privilege and oblivious complacency (Gabe regularly envies his friend Josh’s more luxurious trappings) can affect us all. It’s no great stretch to ultimately envisage the film as an adrenalised playing out of Karl Marx’s theory of alienation, people estranged from their humanity by brutal systems of repression and domination. The Tethered, after all, are clad in workmanlike red jumpsuits.

They’re also much more than bogeymen. These are fully rounded characters, and the cast deserve great credit for fleshing out their dual roles. Winston Duke’s Gabe is garrulous comic relief, while his Abraham is a suffering, near-mute man-child. Shahadi Wright Joseph’s Zora is a plucky, frightened teen, but her glowering, toothlessly grinning Dahlia is arguably the film’s most chilling creation. Elisabeth Moss has devilish fun with her extended cameos. And alongside her haunted heroine Adelaide, Lupita Nyong’o’s unnerving physical and vocal contortions as Red embody a reckoning for a lifetime of unwilling, undeserved servitude. #Time’sUp, indeed. 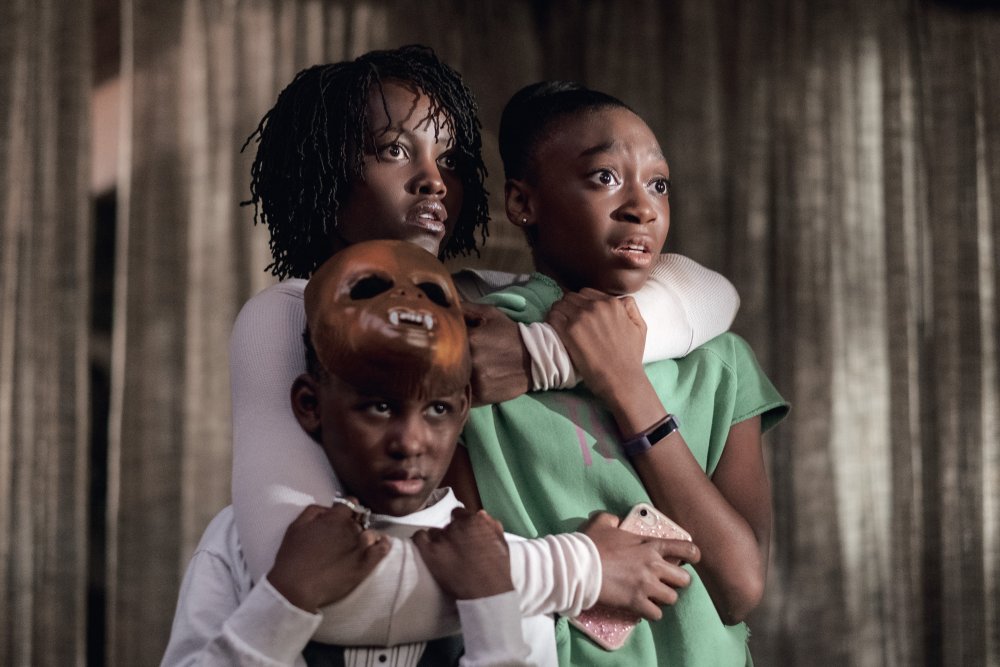 Lest this all sound far too worthy and serious, Peele first and foremost provides supremely exciting and effective entertainment. His comedy background and evident love of horror dovetail in scene after scene. A grimly tense and expertly staged attack can be followed, or even spliced, with sudden jolts of humour. One sequence featuring ‘Ophelia’, a non-brand equivalent of Amazon’s talking Alexa, switches from terror to outrageous laughter in the flick of a vocal command. And Michael Abels’s propulsive score effortlessly shifts from dread-tinged minimalism to full-blown operatics, including a mischievous orchestral version of a hip-hop anthem that crops up early on, Luniz’s I Got 5 on It.

So rich and relentless are Us’s themes and ideas, with exposition still unfolding in its third act, that there’s a nagging feeling it doesn’t quite all fully cohere. Still, Peele is evidently invested in starting conversations and repeated viewings. Younger audiences may want to investigate the relevance of 1980s video-cassette titles (including C.H.U.D and The Man With Two Brains) displayed in the opening scene; non-religious audiences might now look up recurring Bible verse Jeremiah 11:11. Us follows in the tradition, from Hitchcock to Spielberg, of genre films mining a deeper level than mere surface thrills. And if Jordan Peele seeks to make us confront the man or woman in the mirror, that he constructs such intricate, twisted funhouses in which to do it is a mighty bonus.

Related to Us review: Jordan Peele raises the damned