Mirror, mirror: Jacques Rivette, the Marx Brothers and the plays we game

While watching Jacques Rivette’s Duelle (1975) a few days after the director passed away, I found myself laughing out loud at a moment which hadn’t struck me as particularly funny during either of my previous viewings. Night porter turned amateur detective Lucie (Hermine Karagheuz) has followed the mysterious Viva (Bulle Ogier) into a gambling den, and approached her claiming to be researching an article about casinos. Flourishing a pen, she reaches into her jacket pocket and attempts to locate that indispensable accessory for any self-respecting journalist, a notebook. But before Lucie can produce the required object, Viva casually reaches into her own pocket, pulls out a few scraps of blank paper, and hands them to Lucie, who acknowledges the gift with a nod of her head.

This gesture irresistibly reminded me of one in Leo McCarey’s Duck Soup (1933). In perhaps the film’s most famous scene, Rufus T. Firefly (Groucho Marx) confronts Pinky (Harpo Marx) across a space which had, until a few seconds ago, contained a mirror. Since Pinky is disguised as Firefly, he attempts to convince the latter that what he’s seeing is actually a mirror reflection. As the scene progresses, it becomes clear that Firefly, far from being fooled by this ploy, regards the whole thing as a game. At one point, both men remove their hats and bow; when Pinky accidentally drops his hat, Firefly picks it up and hands it back to him, something Pinky acknowledges with a friendly nod. As with Viva’s passing of the paper to Lucie in Duelle, the gesture Firefly makes to help Pinky maintain his fiction is precisely the gesture which reveals Firefly has not been duped.

Duck Soup’s mirror routine actually originates in Max Linder’s Seven Years Bad Luck (1921), but the effect there is quite different, Linder’s version missing that element of play which distinguishes McCarey’s. Linder belongs to a comic tradition in which performers played either ‘themselves’ or a consistent character from film to film. Linder was always Max, just as Buster Keaton was usually Buster, Chaplin the Tramp and Laurel and Hardy Stan and Ollie. But with the exception of Monkey Business (1931) – in which they play themselves (at least according to the end credits) and are acquainted from the opening scene – the Marx Brothers, like W.C. Fields, tended to play different characters in each film.

The joke, of course, is that whether Groucho is Rufus T. Firefly, Captain Spaulding, Professor Wagstaff or Otis B. Driftwood, he is always indefatigably Groucho, just as Chico and Harpo are always themselves. When a character played by Groucho first meets a character played by Chico, the idea that these two men are strangers who have just been introduced is undermined by the easy familiarity they instantly demonstrate towards each other. Thus Rufus T. Firefly’s amused willingness to feign acceptance of the fiction that Pinky is his mirror reflection neatly matches Groucho Marx’s amused willingness to feign acceptance of the fiction that Harpo Marx is Pinky. 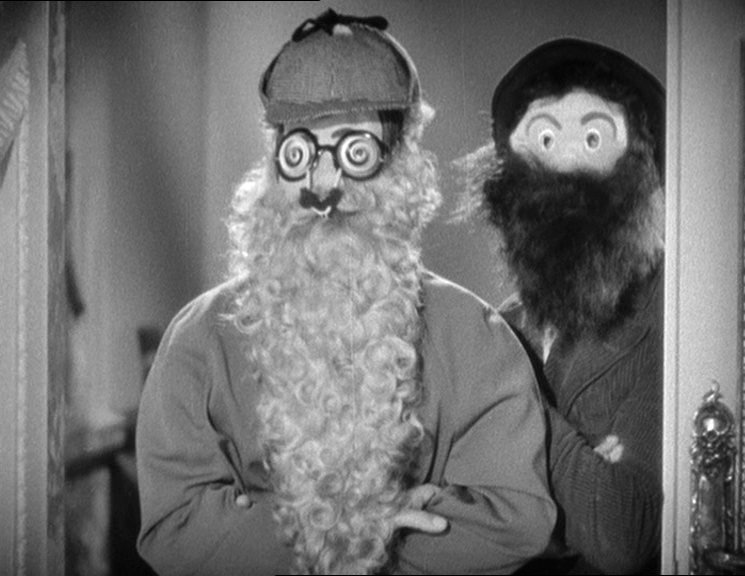 It is precisely this notion of identity as play – something which is infinitely malleable rather than set in stone – that most closely links the Marx Brothers with Rivette. Maintaining a coherent persona or narrative role in Rivette’s universe is like attempting to remain balanced while standing on a ball (precisely what Lucie is seen doing in Duelle’s opening shots), an act that by its nature can only be kept up for a brief period.

Juliet Berto’s characters in Rivette’s Out 1 (1971/90), Celine and Julie Go Boating (1974) and Duelle all tell wild and contradictory tales about their backgrounds, and as Berto delivers a stream of untranslatable Chico-like verbal nonsense (‘boa constricteur’ becomes ‘boa con-qui-t’adore’ and ‘boa con qui m’adorait’ by way of ‘boa conquistador’) in Celine and Julie, Dominique Labourier cements the connection by donning what appears to be a Groucho mask. This masterpiece’s ‘serious’ scenes (derived from Henry James’s The Other House) disrupt the otherwise playful narrative in much the same way that plot-driven moments disrupt the comic flow of various Marx Brothers movies; when Céline (Berto) and Julie (Labourier) enter the house of fiction together and begin anarchically interacting with the dramatic world, they undermine its romantic/criminal codes and ideological assumptions as thoroughly as Groucho, Chico and Harpo ever did, even taking the time to perform a variation on Duck Soup’s mirror routine.

Among this film’s most notably Groucho Marxist sequences is Céline’s encounter with Julie’s childhood boyfriend Guilou (Philippe Clévenot), whom she arranges a meeting with under the pretence that she is actually Julie. When Guilou fails to notice his lover has been replaced by a stranger, unruly improviser Céline exchanges parodically amorous banter (“The wind howled and we danced and we loved… ecstasy!”) with this conventional role-player before abruptly telling him to “go jack off among the roses”.

What we have here is essentially a gender-reversed variation on Groucho’s mock-romantic/viciously insulting conversations with Margaret Dumont (“Why, you’re one of the most beautiful women I’ve ever seen, and that’s not saying much for you”). Yet this gender reversal is hardly incidental, and surely accounts for the darkly paranoid tone of even Rivette’s lightest films, so different from that atmosphere of consequence-less amusement associated with the Marx Brothers.

Groucho, Chico and Harpo existed in a world which may have been dominated by humourlessly authoritarian pedants, but was nonetheless a place where masculine superiority and control were taken for granted. The games played by Rivette’s female characters, however, challenge the very foundations of a society strictly organised in accordance with masculine interests, and it is hardly surprising that much greater stakes should be involved. Rivette’s games have consequences, as those of the Marx Brothers emphatically do not, and if victory for his heroines involves the possibility of unconditional liberation – not only from the bonds of narrative and logic, but also from male dominance (in all its forms) – defeat brings with it the threat of total erasure; not simply death, but the loss of individuality and identity. There is, after all, only a thin line between the giddy joy of treating life as a limitless game and that terrifying abyss of insanity into which Rivette’s characters frequently stare.

Related to Mirror, mirror: Jacques Rivette, the Marx Brothers and the plays we game