A letter from our editor to her French counterpart Jacques Rivette – and a Cahiers du Cinéma/S&S link-up that never was.

The recent deaths of both our long-serving editor Penelope Houston (last October) and the critic turned founding French New Wave director Jacques Rivette (29 January) sent our colleague and BFI historian Christophe Dupin to his archives, where he exhumed the below correspondence from 1964 between the desks of Sight & Sound and its French opposite, Cahiers du Cinèma, where Rivette was then in the middle of his two-year tenure as editor. (He’d already made his directorial debut with Paris nous appartient in 1961, and was presumably preparing for his follow-up, 1965’s La Religieuse.)

As Houston pointed out, it was now five years since Rivette’s colleagues had fired the first salvos of the nouvelle vague at Cannes with The 400 Blows and Hiroshima mon amour. After this “first excitement… it would be very interesting for us to have your ideas on whether there has been a lasting benefit,” she ventured, continuing to outline her proposed 3,000-5,000-word feature over a generous paragraph and more. (In the age of email, we confess our invitations to writers do not always achieve this degree of elaboration.) 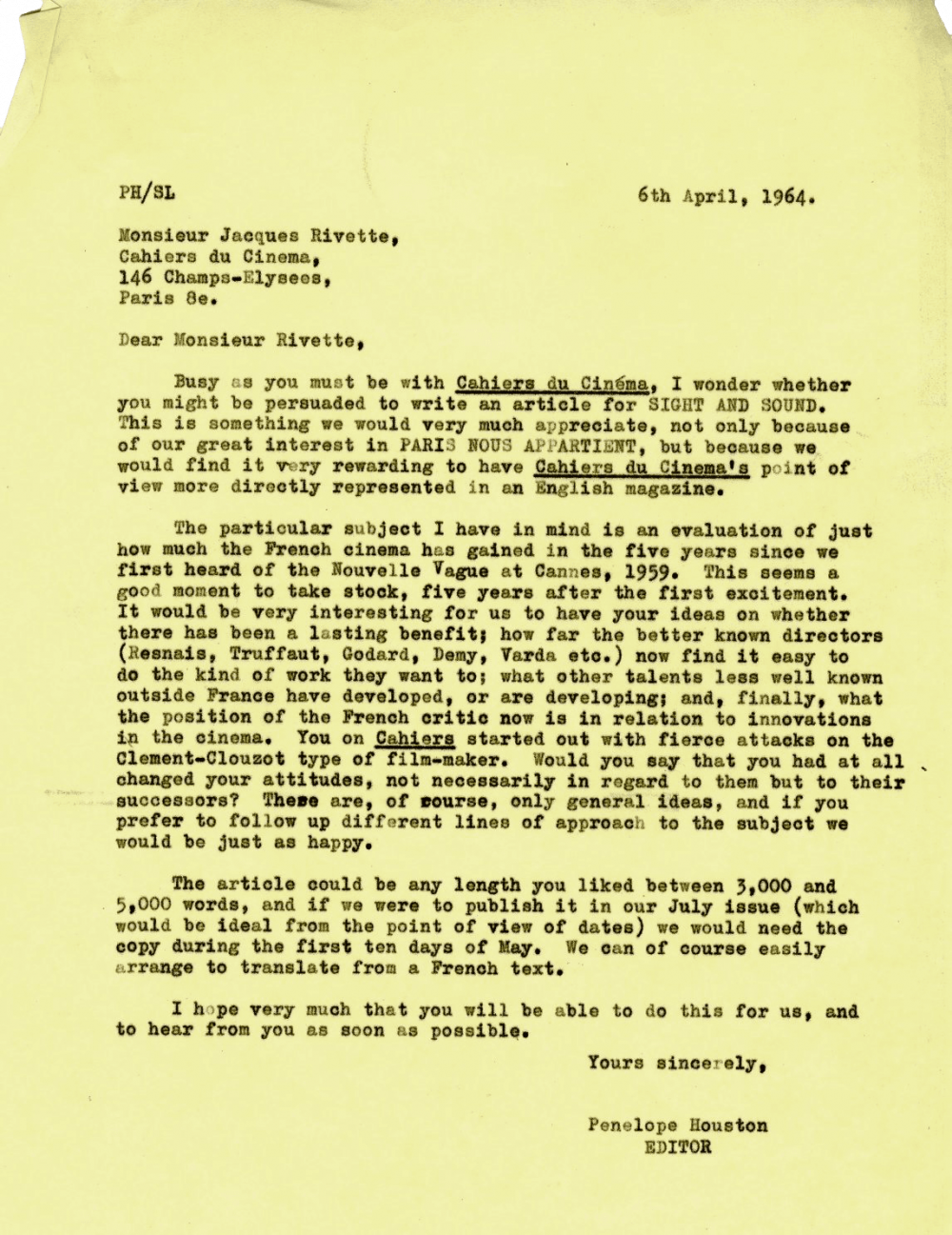 Busy as you must be with Cahiers du Cinéma, I wonder whether you might be persuaded to write an article for SIGHT AND SOUND. This is something we would very much appreciate, not only because of our great interest in PARIS NOUS APPARTIENT, but because we would find it very rewarding to have Cahiers du Cinema’s point of view more directly represented in an English magazine.

The particular subject I have in mind is an evaluation of just how much the French cinema has gained in the five years since we first heard of the Nouvelle Vague at Cannes, 1959. This seems a good moment to take stock, five years after the first excitement. It would be very interesting for us to have your ideas on whether there has been a lasting benefit; how far the better known directors (Resnais, Truffaut, Godard, Demy, Varda etc.) now find it easy to do the kind of work they want to; what other talents less well known outside France have developed, or are developing; and, finally, what the position of the French critic now is in relation to innovations in the cinema. You on Cahiers started out with fierce attacks on the Clement-Clouzot type of film-maker. Would you say that you had at all changed your attitudes, not necessarily in regard to them but to their successors? These are, of course, only general ideas, and if you prefer to follow up different lines of approach to the subject we would be just as happy.

The article could be any length you liked between 3,000 and 5,000 words, and if we were to publish it in our July issue (which would be ideal from the point of view of dates) we would need the copy during the first ten days of May. We can of course easily arrange to translate from a French text.

I hope very much that you will be able to do this for us, and to hear from you as soon as possible. 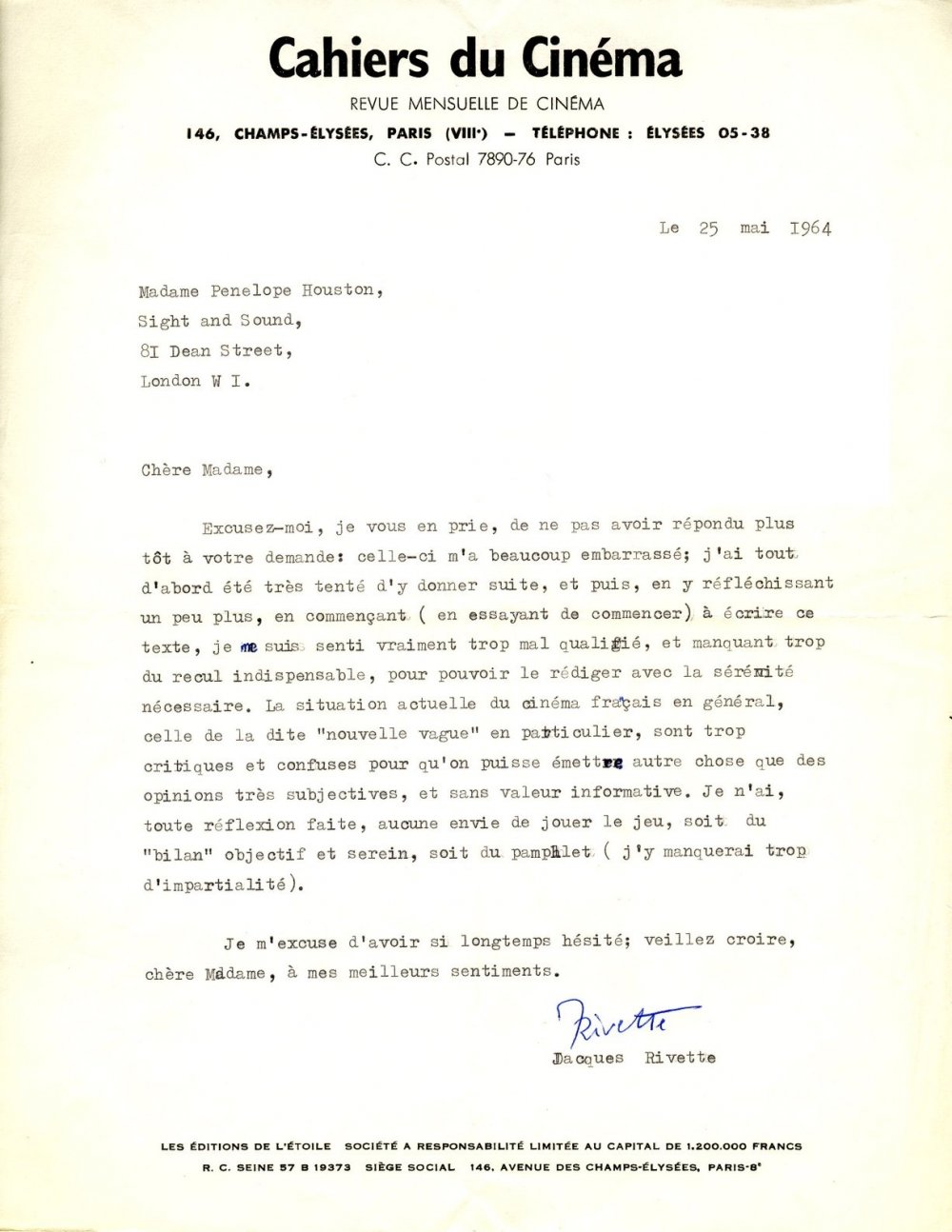 My apologies for not replying to your request earlier, but I was rather embarrassed by it; at first I was very tempted to follow it up, and then as I thought about it a little more, and as I started (or tried to start) writing the text, I felt I was not properly qualified, and that I was lacking the necessary hindsight to be able to write it with the serenity required. The current situation of French cinema in general, and of the so-called “Nouvelle Vague” in particular, are too critical and confused for us to express anything but very subjective opinions, without any informative value. Upon reflexion, I have no desire to play the game of the objective and serene assessment, or that of a lampoon (I would be too lacking in impartiality).

I am sorry I have hesitated for so long.

(With thanks to Christophe Dupin for both the excavation of the letters and the translation of Rivette’s reply.)