The most covert of all the French New Wave gang, Rivette was as visionary as any of them, juggling themes of performance and plot in films like Paris nous appartient and Céline and Julie Go Boating while opening up film form to the experience of duration, not least in the monumental 12½-hour Out 1. 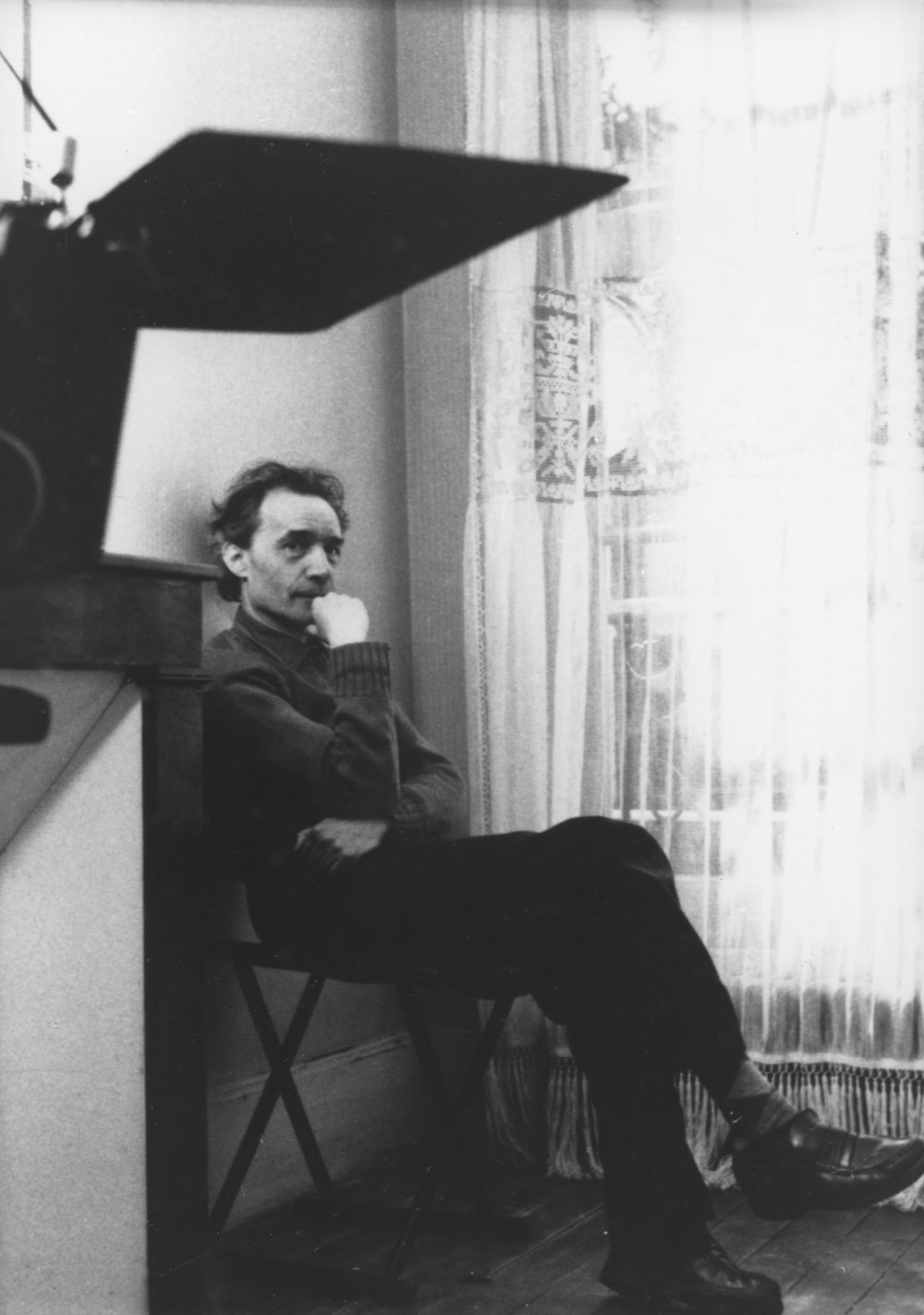 It’s fair to say that throughout his filmmaking career, Jacques Rivette remained the mystery man among the nouvelle vague filmmakers. He had the least contact with mainstream audiences; made comparatively few films, of which several have at times been difficult to see; and was the least interested in publicising his work, committed as he was to pursuing his cinephile passions in a somewhat hermit-like manner. (It’s said that in the 70s, when Rivette sometimes went AWOL from his own shoots, he would invariably be found watching some rarity in one of the Left Bank art cinemas.)

The recent screenings and DVD release of his fabled 750-minute film Out 1: Noli me tangere (1970/90) has confirmed Rivette’s reputation as an audacious experimenter with form; Céline and Julie Go Boating (1974), his best-known film and one of cinema’s greatest meta-fictions, was a more approachable but no less revelatory follow-up. But this ludic streak was only part of the picture: Rivette was also a rigorous adapter and student of literature, whose versions of Diderot and Balzac respectively, La Religieuse (1965) and Don’t Touch the Axe (2006), showed a controlled style that caught a fine balance between scholarly severity and a precariously contained emotional intensity. 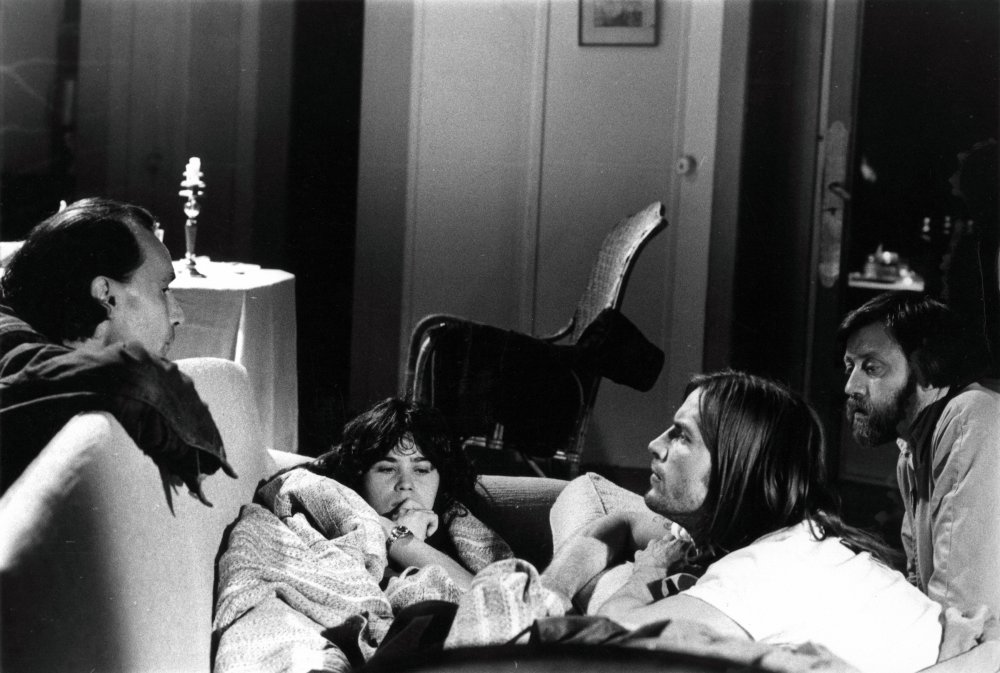 He was also a great director of actors, not least when encouraging them to follow their own investigations into the nature of their profession. Jean-Pierre Léaud, Jeanne Balibar, Emmanuelle Béart, Michel Piccoli, Jane Birkin and Sandrine Bonnaire were among those who did some of their finest work with him, while in his more experimental films, Juliet Berto, Dominique Labourier and Bulle Ogier transcended their own personalities to merge with their characters, partly because they played such a large part as improvising co-authors in creating them.

Rivette was born in 1928 in Rouen (Flaubert’s birthplace, which can only have furthered his literary inclinations). Inspired by reading Jean Cocteau’s diary of shooting La Belle et la Bête, he made his first short film – the 16mm silent, Aux Quatre Coins – in 1949, then moved to Paris, hoping to study cinema. He failed his oral exam for l’IDHEC, but set about undertaking the same immersive course of cinema-going as the ‘rats de Cinémathèque’ who would become his New Wave peers – Godard, Truffaut, Chabrol and Rohmer. 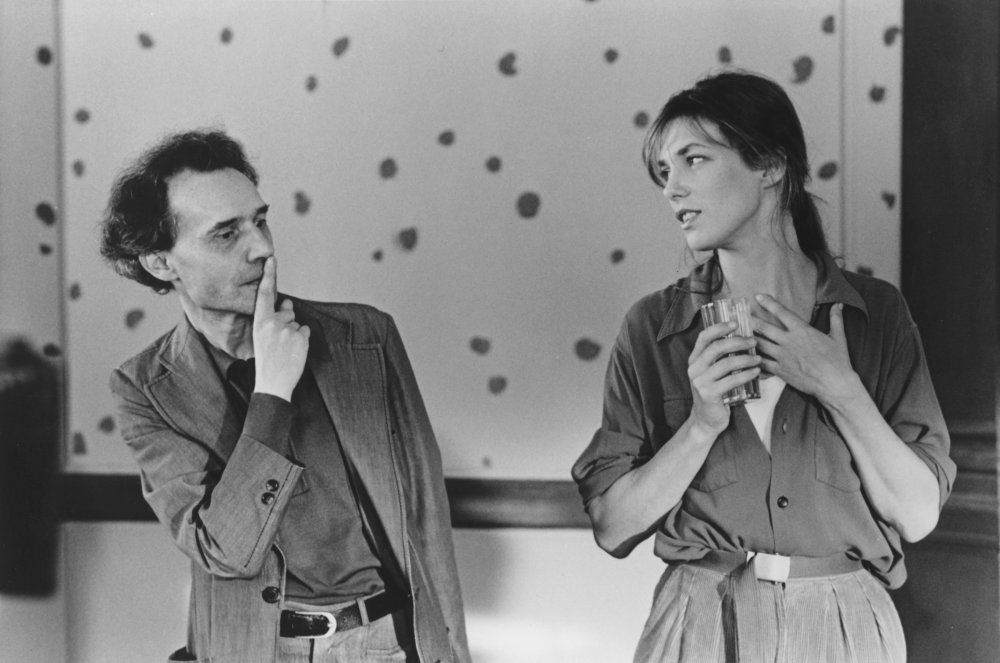 Jacques Rivette on the set of L'Amour par terre (1984)

These five would become critics associated with Cahiers du Cinéma, before turning to filmmaking themselves – although Rivette had already made his first feature, Paris nous appartient (1961), before becoming editor of Cahiers from 1963 to 1965. He helped transform the magazine considerably, bolstering its commitment to theory and expanding it beyond strictly cinematic parameters, instigating interviews with figures such as Roland Barthes and Pierre Boulez. His work as a critic continues to be one of his most important legacies – an admirer of American directors such as Hawks and Ford, he also wrote influential pieces on Fritz Lang and Rossellini, while a brief but trenchant remark on the ethics of camera movements would become proverbial when critic Serge Daney later expanded on Rivette’s comment on “the tracking shot in Kapò” (the reference is to Gillo Pontecorvo’s Holocaust drama of 1960). Rivette’s conversations with a French master formed the basis of a TV documentary, Jean Renoir, le Patron (1966), that remains one of the most admired films about filmmakers. 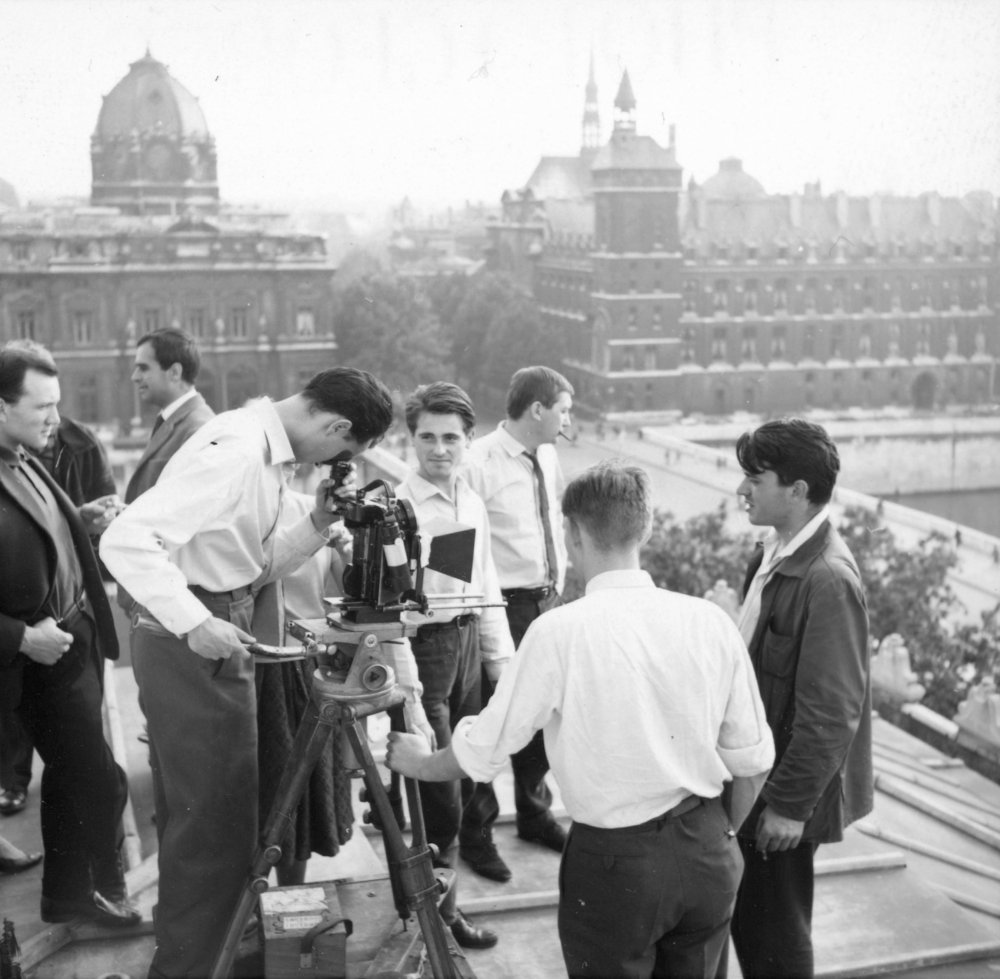 Largely shot in 1958, but not released till three years later, Paris nous appartient was the most severe of the first nouvelle vague productions – still a film of the 50s, rather than exuberantly announcing the future. But it’s a work that transcends mere zeitgeist, and has grown in stature: a drama about a post-war city governed by anxiety, in which students, actors and activists all play parts in a complex intrigue (or, as in so many Rivette films, the hallucinatory impression of an intrigue), circling round an attempt to stage a production of Pericles. Many of Rivette’s recurring motifs and devices appear here fully formed: the theme of hidden conspiracy, the use of plays and rehearsals to provide parallel narratives, the gradual unfolding of a hidden ‘other’ Paris, emerging from beneath the known map.

Rivette’s second film was an ascetic, highly formal adaptation of Diderot’s La Religieuse, following the ordeals of a young novice, played by Anna Karina. It offended Catholic sensibilities in France, and was for some time banned on grounds of anti-clericalism, despite being defended by the likes of Marguerite Duras and Raymond Queneau. For years, it looked like the anomaly in Rivette’s career, until he returned to costume drama in his 2006 adaptation of Balzac’s La Duchesse of Langeais, an austere chamber drama with distinct overtones of Visconti. 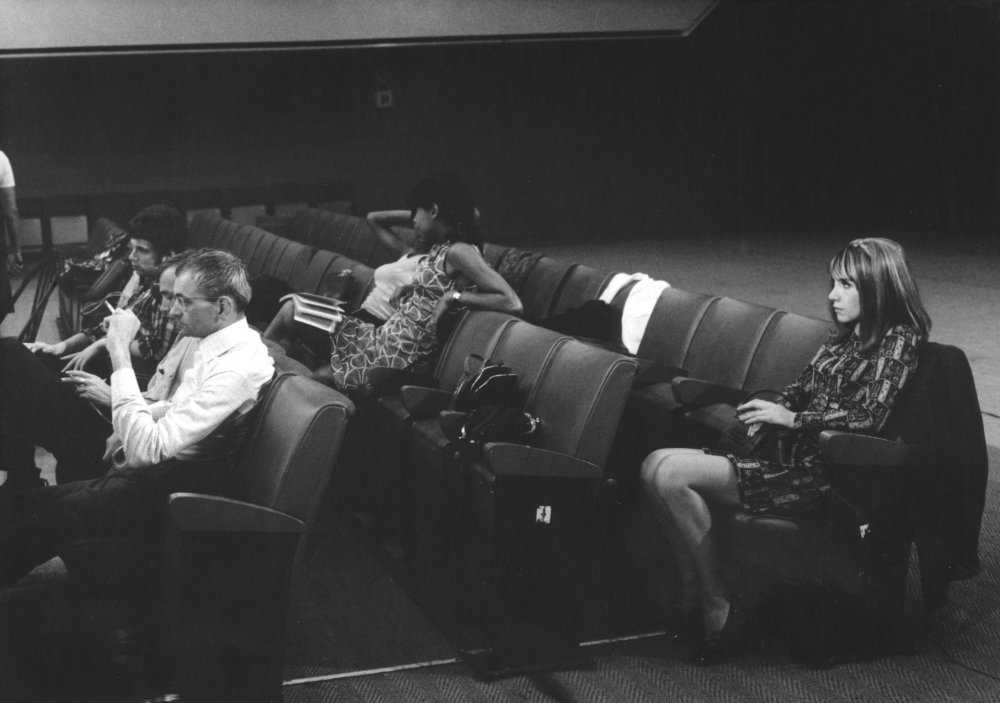 L’Amour Fou (1968) portrayed the intense, mutually destructive relationship between a theatrical couple, played by Ogier and Jean-Pierre Kalfon. Shot in black and white, mixing 16mm and 35mm stock, the film used dialogue improvised by the actors, and displays a sometimes harrowing textural and emotional rawness.

Rivette pushed his experimentation further with Out 1. Originally made for French TV, but rejected as unshowable, the seven-chapter, 13-hour film has a huge cast and found its free-floating narrative shape via the contributions of the actors themselves. Involving two eccentric outsider ‘detectives’, two theatre groups rehearsing Aeschylus and a supposed shadow conspiracy, it remains one of the boldest formal experiments of the twentieth century, in any art form. 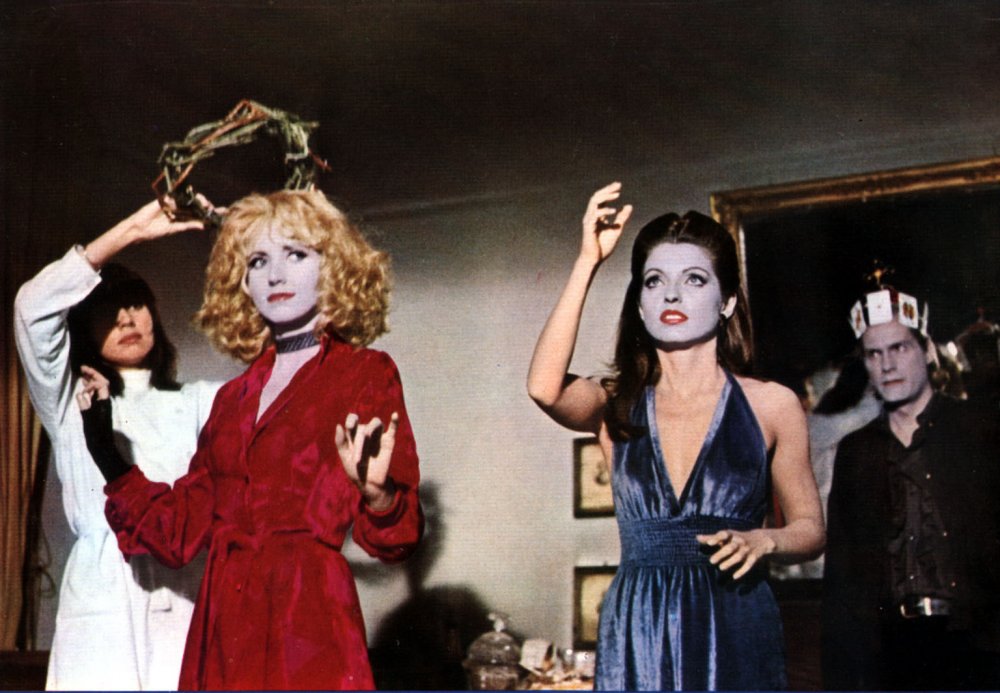 Rivette then found a more playful and audience-friendly application of similar techniques in Céline and Julie Go Boating, a joyously Borgesian fantasy on fiction-making, ghosts, the silent serials of Louis Feuillade and female friendship or romance. Driven by the characters played and created by Berto and Labourier, it’s possibly the greatest feminist picture to be directed by a man.

The 1970s took Rivette into no less strange areas: Duelle (1975) was a meta-film noir with a mystic-metaphysical streak; Noroît (1976), based on the Jacobean play The Revenger’s Tragedy, was a pirate story with overtones of experimental drama à la Peter Brook, and Rivette’s most inscrutable film. Other dramas used a loosely applied thriller structure to eerie or rarefied effect: Merry-Go-Round (1983; with Joe Dallesandro and Maria Schneider), Le Pont du Nord (1982) and most successfully, Secret Défense (1997), a revenge drama with echoes of the Electra myth, starring Sandrine Bonnaire.

The 90s produced two of Rivette’s most ambitious works. La belle noiseuse (1991), based on Balzac’s story The Unknown Masterpiece, is a four-hour inquiry into the dynamics between an artist (Michel Piccoli) and a model (Emmanuelle Béart), a relationship fraught with problematics of sex and power, not least for the artist’s wife (Jane Birkin). It’s a complex essay on the problems of representation, and on time in cinema. 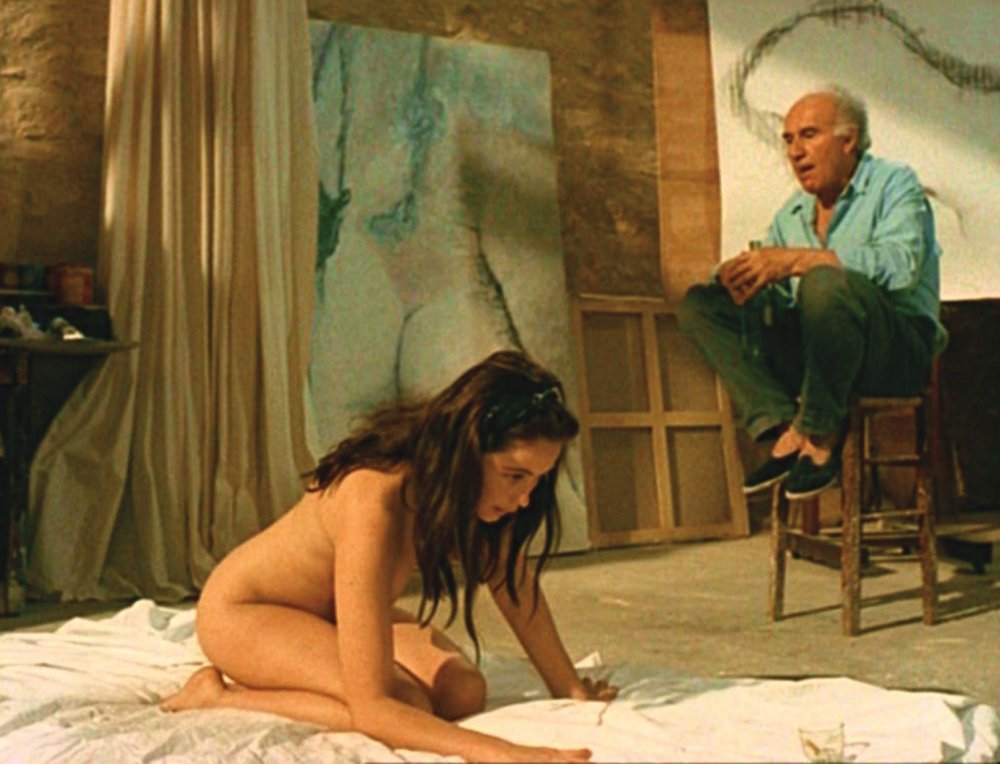 In 1994, Rivette made the two-part Jeanne la Pucelle, a starkly realist historical work with an imposing Bonnaire as Joan of Arc. There was also the playful quasi-musical Haut bas fragile (1995), an inspired fancy ripe for rediscovery.

After Don’t Touch the Axe – and before the onset of Alzheimer’s disease – Rivette made his last film, Around a Small Mountain (36 Vues du Pic Saint-Loup, 2009), about a travelling circus, with Birkin and the often unsung but invariably magnificent stalwart André Marcon. Seemingly slight, but rich in its observations on art, time and love, it couldn’t have been made by anyone else, and is a supreme example of the late-period, minor-key film that reveals hidden depths. 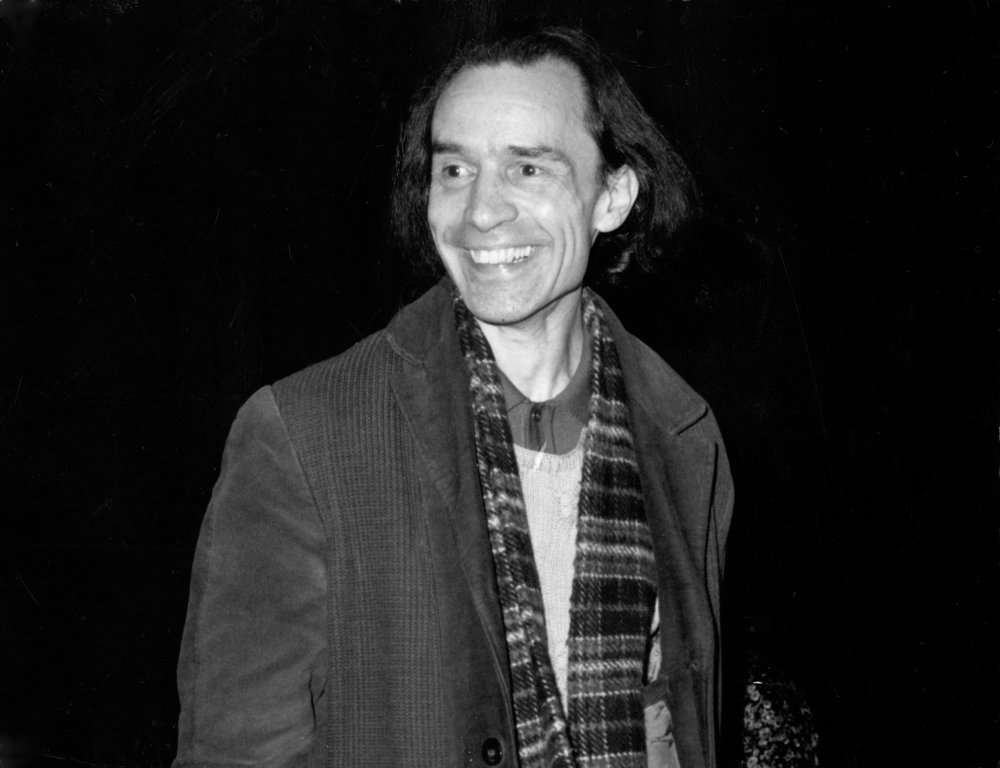