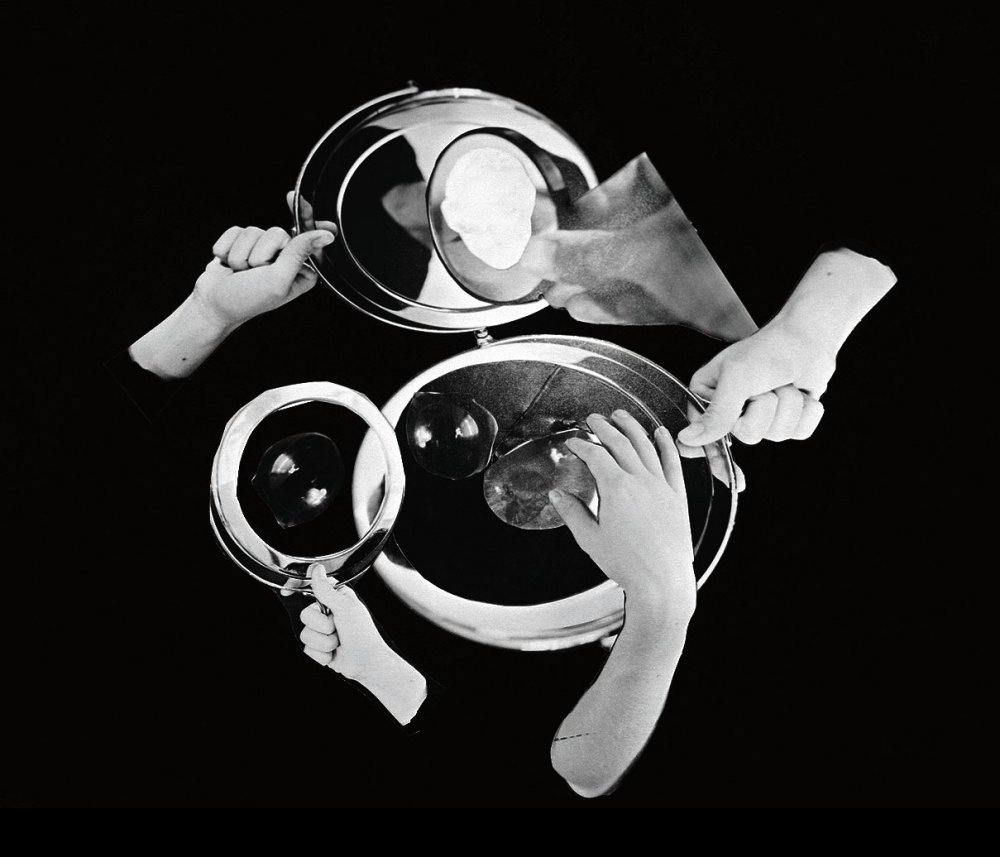 Magic mirrors have a tendency play with our sense of size. Through the looking glass, Alice grows and shrinks; at the fairground, halls of mirrors distort the proportions of faces and bodies.

Sarah Pucill talks with curator and critic Helena Reckitt at the Nunnery Gallery at 7pm on Wednesday 29 April.

Moving through East London’s Nunnery Gallery, my first encounter with the work of French surrealist polymath Claude Cahun, born Lucy Schwob in 1894, and contemporary London filmmaker Sarah Pucill is one of a similar warping of dimensions. Many of Cahun’s photographs, which line a long, narrow room, are tiny, yet the images they depict, of Cahun and her partner Marcel Moore in a variety of costumes and personae, are so striking, their composition so confident, they demand to take up space. Their snapshot size indicates mainly they were never intended for display: shot for the most part during the 1930s and 40s, when Cahun and Moore had left Paris for a reclusive existence in Jersey, the meticulous images document an ongoing performance for an audience of two.

In Sarah Pucill’s 2013 film Magic Mirror, which shows in an adjacent room on a large screen, Cahun and Moore’s miniature tableaux expand and contract, taking the viewer out onto the wide beaches where Cahun once posed dressed as an awkward angel in silver foil and chiffon, but also intimately into the body – whose, you’re not sure; it could be artist or lover or both (and Cahun and Moore were both). The iris of an eye fills the frame; a dark throat swallows it. Lips and noses are seen through magnifying glasses, and a pair of sunlit legs, knees bent, slowly part. This is a self-contained world that rejects outsiders while engulfing its subjects. Necessarily so: in 1940, Jersey was occupied by Nazi Germany and Cahun and Moore, both Jewish, carried out a small but determined resistance campaign which landed them both in prison. 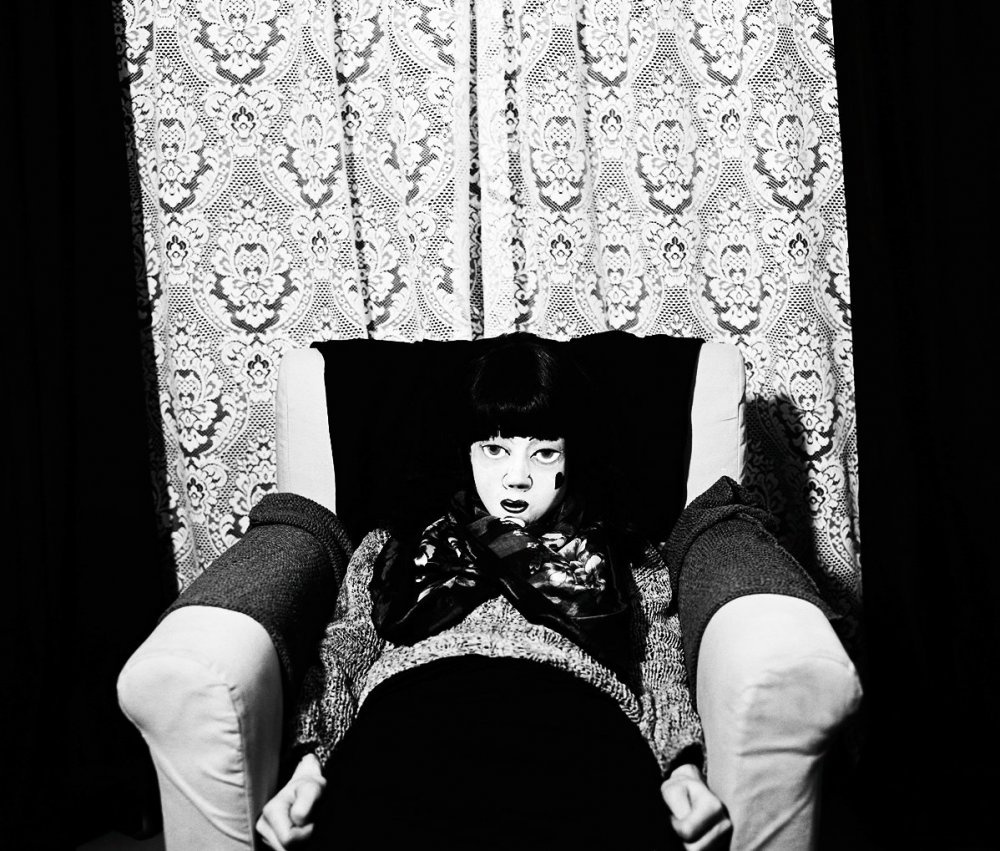 Magic Mirror animates Cahun and Moore’s photographs, in some cases very literally: each chapter of the film opens with a stop-motion sequence in which their own photomontages come to jerky life over fairground organ music.  Elsewhere the animation provides a kind of backstory to known images, with actors/performance artists Andro Andrex, Rowina Lennon and Kate Hart alternately taking on the role of Cahun. In the second of nine chapters, theatrical paint is slowly applied to a face in extreme closeup. Finally Cahun appears as a doll-like female figure in an ersatz Elizabethan dress, posing as if in a masque. The genesis for this sequence is a photograph that shows Cahun, while still in Paris, taking part in an experimental theatre production of Bluebeard; Pucill stops short of imagining the play itself, focusing on and making almost absurd the rituals of transformation required to perform gender – rituals that Cahun, who adopted an androgynous identity and appearance for most of her life, questioned and subverted throughout her work.

Another animation takes place, which is that of text. Extracts of Cahun’s Disavowals (1928) are read in voiceover by seven different narrators including Pucill, with intertitles quoting from the book framing each chapter. On first viewing, it’s not the easiest text to take in. Cahun’s juxtapositions of poetry, memoir, fiction and putative gender theory are deliberately jarring, in accordance with her Surrealist allegiances. She plays here with multiple voices and disciplines, posing questions which provoke the reader with dramatic suggestions: “I cannot imagine how one would get out of oneself, this house, this haunting,” she wonders. “There is only one solution – to set fire to it.” 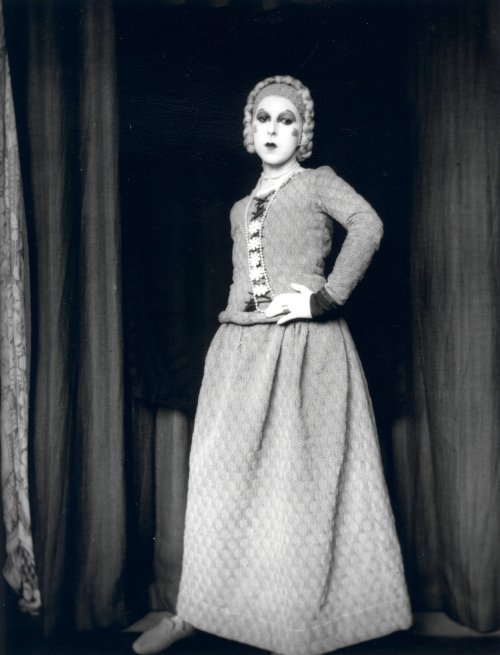 But the problem here is more one of audibility than textual legibility – when the narrators speak in pairs, or with one voice double-tracked, as happens fairly often, the words become indistinct and overly sibilant. One suspects this is a result of showing Pucill’s 16mm film as a digital version with a slightly harsh sound mix not optimised for echoing gallery rooms (as its name suggests, the Nunnery is a former convent building with high ceilings and concurrent acoustics).

While there is much to enjoy in the textures of the voices Pucill chooses – all identifiably feminine, they differ in age, register and timbre, resulting in a kind of contrapuntal effect – it is a shame to lose some of Cahun’s often arrestingly vivid prose. What can be deciphered from Chapter 7, for example, is an erotic reverie suggesting the very beginnings of Cahun and Moore’s relationship (meeting as teenagers, they became stepsisters when Cahun’s father married Moore’s mother). The text describes two lovers whose hair became so tangled “we had to shave our heads” – both women are pictured in later life with cropped hair – and a post-coital dawn with skies “like fields of sand”.

Other times, Cahun’s eroticism is gently absurd, perhaps sending up the objectification of women’s bodies in avant-garde art. She invites us to “Encounter a young girl’s breast, on a custard tart” via a sequence in which hands sift flour and butter, knead pastry and eventually drape it over a breast, with a cherry on top as a final flourish. Pucill takes you right into the mixing bowl and onto the rolling slab here, sonically too, with crumbs pattering like hailstones. Dough and flesh are interchangeable, both tactile, both pleasurable.

Pucill teases out and pays tribute to the domestic narrative at the heart of Cahun and Moore’s story with scenes such as these, and the many others that seem to take place within the home, amid the folds of curtains and sheets that are not only photographic backdrops but the fabrics of daily life. This is not in order to isolate Cahun from her more established literary or artistic context, but to honour an emotional and subjective one that is key to much feminist and lesbian art – including Pucill’s own films which, while far from diaristic, with a fascination with staging, tableaux, costume and character, as well as the techniques and aesthetics of early cinema, are nonetheless deeply personal, with Pucill interrogating her own role as filmmaker, actor and spectator. In Magic Mirror’s predecessor, Phantom Rhapsody (2010), she appears as a stage magician: the director as creator of illusions. Her 2004 film Stages of Mourning, made following the death of her partner, the filmmaker Sandra Lahire, is a meditation on grief that explores both the potential and the limits of the photograph, as Pucill takes part in a silent dialogue with still images of Lahire. 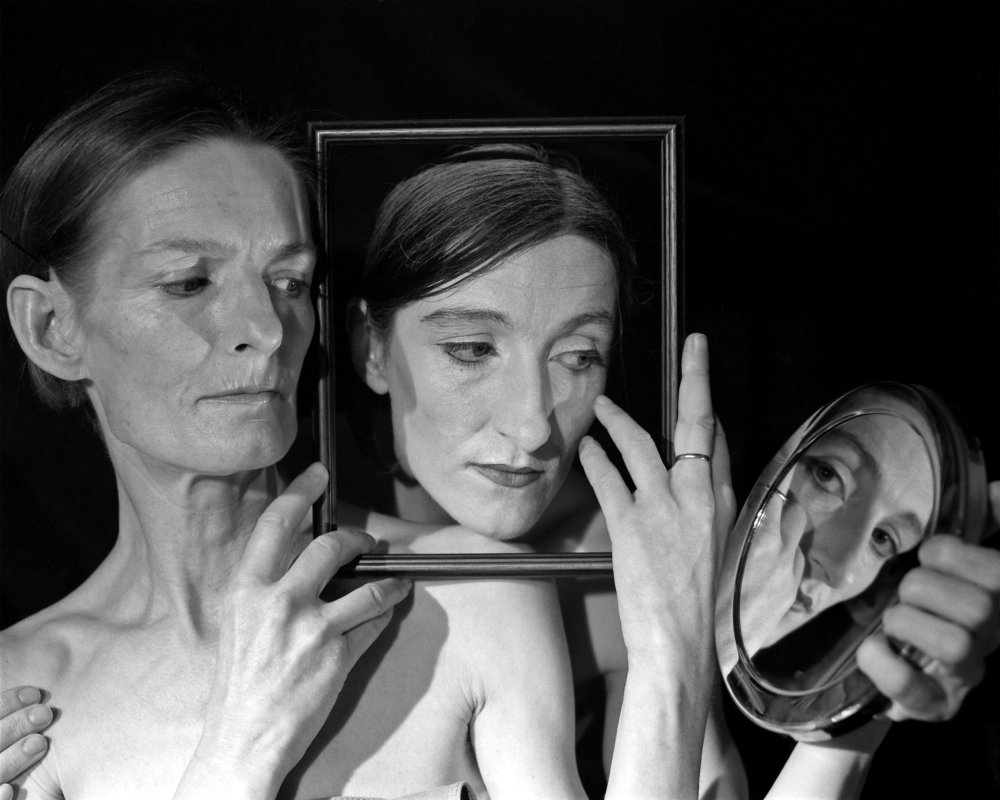 A still from that film is tellingly included among Cahun and Moore’s photos, as are various stills from Magic Mirror. These are not labelled – not to confuse the viewer, but presumably to respond to the theme of ‘In Dialogue’ which informs all of Bow Arts’ exhibitions at the Nunnery this year (this show followed Mary Barnes Boo Bah, focussing on the relationship between the schizophrenic-turned-painter and her therapist and friend Joseph Berke). Despite the many dialogues that could be prompted by Cahun’s work – about the intersection of religious, ethnic and gender identities, about her influence on performance art and queer cinema, about the sexual politics of surrealism, about her prolific writings (few of which are available in English) – the one that emerges most strongly here is that between the two halves of a couple who come, over time, to be one another’s reflections. Pucill’s shapeshifting film adds a fine note of claustrophobia to the exhibition’s subtly romantic mood, reminding you that magic mirrors also have a habit of trickery, flattery and outright lies.