The battle opens up some in this third quarter of Suzanne Collins’ dystopian martial saga – but its protagonist risks getting left behind. 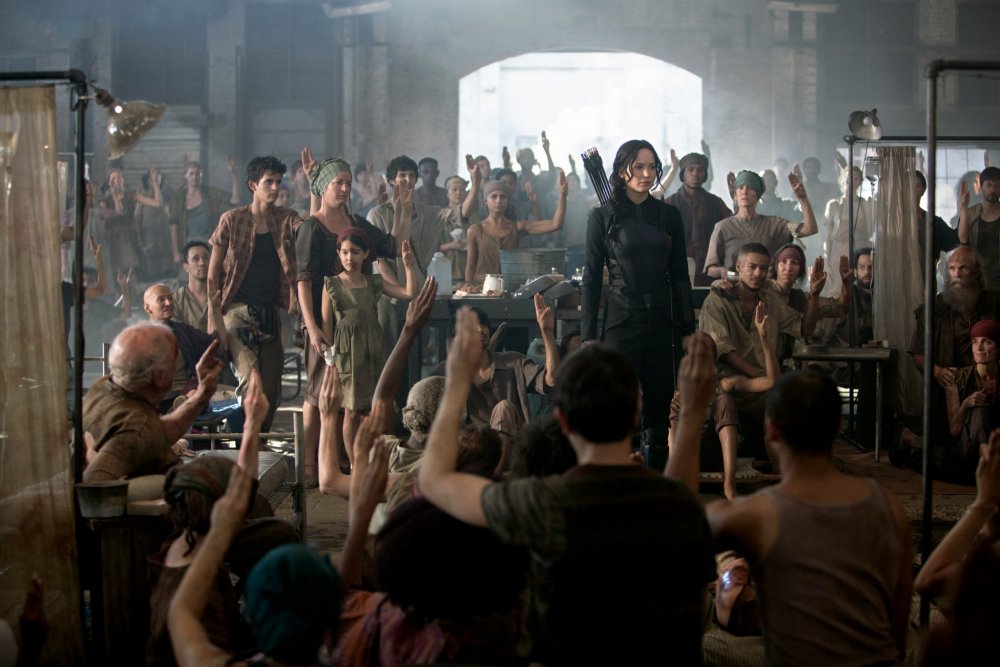 In Mockingjay Part 1, Suzanne Collins’s dystopian trilogy (or film tetralogy) shifts from the reality-TV-show Hunger Games to war games in earnest. Bombings, battles and military camouflage replace the gaudy costumes and equally gaudy CGI effects that shaped Katniss Everdeen’s journey in the first two films. Displaced from her home district after its total destruction, Katniss and her fellow survivors are living in District 13, an underground military base thought to have been destroyed but instead turned into a 40-storey concrete bunker under the steely leadership (and steel-grey hair) of Alma Coin.

Julianne Moore makes Coin this instalment’s dominant character. Collins’s Coin seems to have inspired a trend for presidential bad mothers in recent young adult dystopian adaptations, such as the Chief Elder (Meryl Streep) in The Giver and Jeanine (Kate Winslet) in the Divergent franchise. Wisely, the film decides to play her differently, as more competent and more caring, adding a backstory, more sympathetic interactions with Katniss and – most importantly – scenes that cut away from Katniss’s point of view to show Coin and her team in the command centre.

Screenwriters Peter Craig and Danny Strong have also smartly reordered the book’s sequence of events, shifting the interrelationship between the ‘propo’ videos in which Katniss appears as the rebels’ ‘Mockingjay’ figurehead and the revolutionary acts these videos incite. In this way, motivation and forward momentum belong to Coin and her opposite number in the Capitol, the dictator President Snow, who also gets his own POV scenes. What Coin’s spin doctor Plutarch describes as “moves and countermoves” structure a dynamic story. 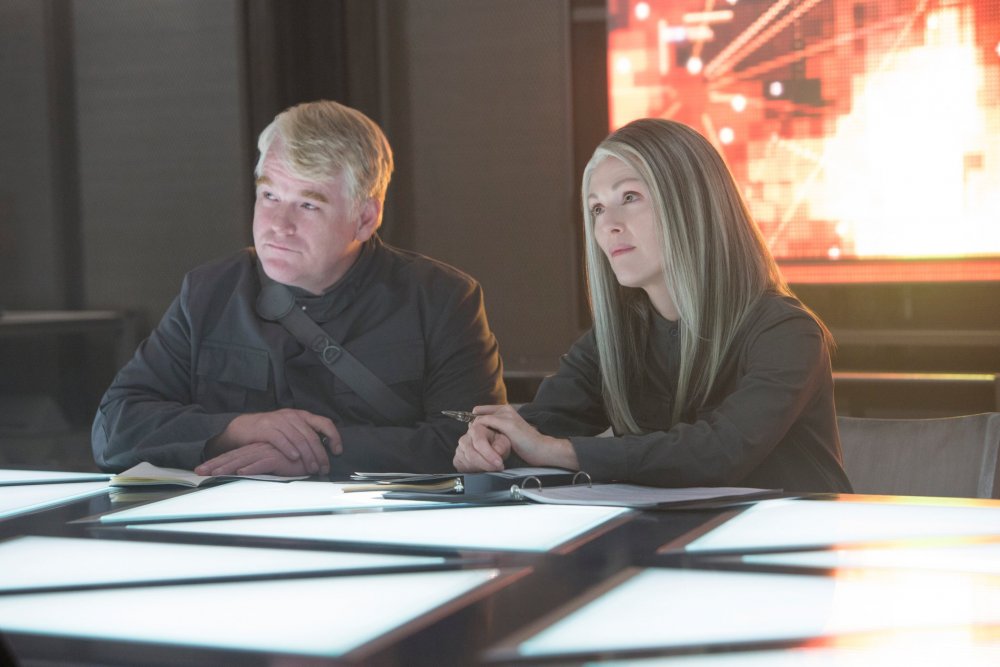 Between move and countermove, however, there are few moments of humour, barring Buttercup the bad-tempered cat. Collins created a cinematic nightmare with District 13: enclosed concrete spaces, no natural light, drab military-issue clothing. As Coin’s deadpan top soldier Boggs, Mahershala Ali does well to bring this environment and its community to life, but his screen time is curtailed, and it then falls to the Capitol defectors to add light to the shade: Woody Harrelson uses Haymitch’s unpredictability and anarchy to good effect, and Elizabeth Banks does the same with Effie’s narcissism and trouper spirit. These two generate both laughs and warmth as rare characters who get to deliver lines that are other than expository. Together with new characters Cressida and Messalla, documentarian deserters from the Capitol, they ironically turn filming propos in the war zone into light relief from the grinding machinations below ground in 13.

Perhaps the most haunting moment in the film starts on a propo trip to District 12, where Katniss sings a folk song, ‘The Hanging Tree’, to the mockingjays. The song acts as a sound bridge over the team’s return to District 13 and into the sabotage of District 5, which begins with the saboteurs picking up the song from its broadcast.

This is one of the few truly effective uses of screens in the film: the connection between District 13 and the rest of Panem – and between Katniss as protagonist and the rising action of the revolution – is entirely reliant on these broadcasts in and out. The reframing of the dramatic footage of Katniss’s excursions for smaller, poor-quality screens often gives the film’s most dramatic moments a televisual feel. Characters on both sides spend a lot of time standing around watching screens; while this may be a smart observation about contemporary politics and warfare, it’s unspectacular. It’s not aided, either, by the direct replication of Collins’s functional dialogue. 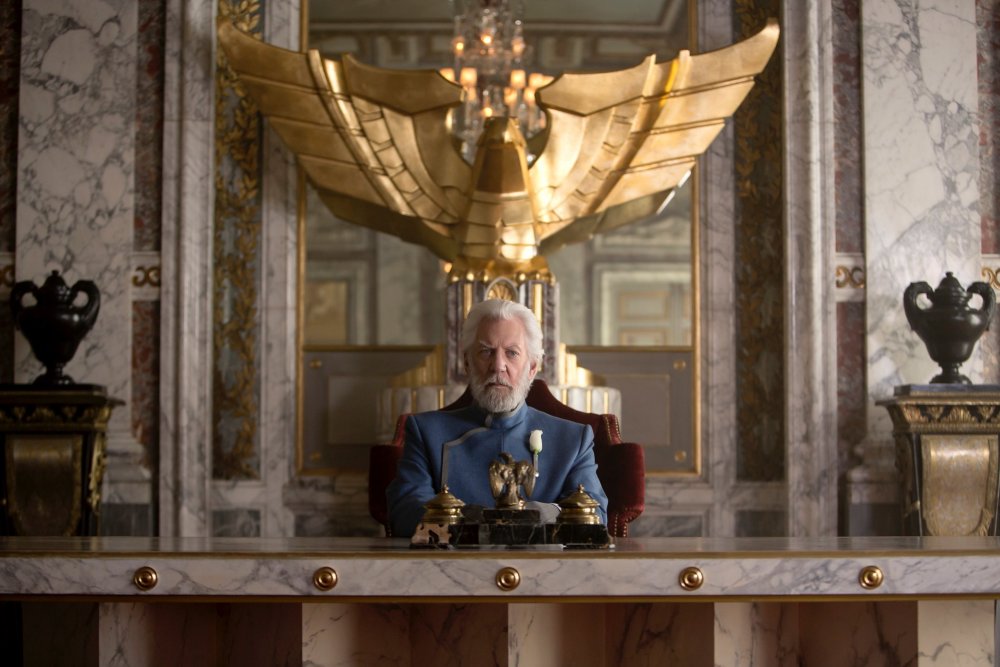 Yet when director Francis Lawrence takes chances by moving away from the book, the film sparkles. In the novel, the raid on the Capitol is outside Katniss’s POV – but it’s a set piece too good to pass up. Lawrence takes to heart the advice given earlier by Philip Seymour Hoffman’s Plutarch Heavensbee – “There’s explaining, and there’s showing” – and gives us a tense hovercraft flight and night-vision raid, cutting between spectacular diegetic coverage and the grainy CCTV screens in Coin’s command centre.

Jeffrey Wright’s Q-like inventor Beetee commissions a propo to generate multichannel noise as cover for the raid, and Katniss watches as fellow games victor Finnick confesses his years as a sex worker in President Snow’s employ and spills the secrets he collected from his high-profile clients. Confessional speech (and gossip) as broadcast news acts as a cover for the off-air raid in an apposite comment on American media; meanwhile the command centre visually echoes The Situation Room, Pete Souza’s 2011 photograph of President Obama and his team watching the raid on Osama bin Laden’s compound in Abbottabad.

The raid conflates Zero Dark Thirty’s story of bin Laden’s killing, the rescue of US soldier Jessica Lynch in Iraq and – with the discovery that Katniss’s friend and co-victor Peeta has been brainwashed to kill her – the capture and release of Bowe Bergdahl in Afghanistan (the subject of Kathryn Bigelow and Mark Boal’s current project). It’s a sign of both the intensity of Collins’s science-fictional world and of its ambiguous politics that this sequence resonates with all three contradictory stories from the US’s illegal invasions. 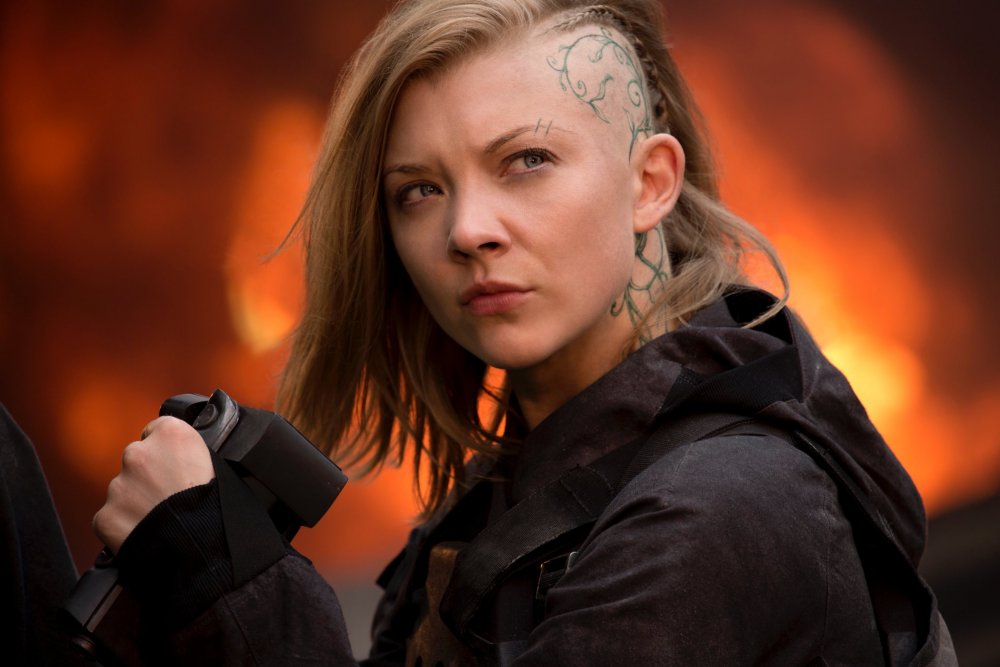 Collins has said that the book stems partly from her father’s experiences in Vietnam, which made him a passionate pacifist. Yet Districts 11 (sharecropping) and 12 (mining) appear to be parallel to Georgia (where the films are shot, in part) and Appalachia, and it can be argued that the novels represent a controversial vision of class solidarity across racial lines, with some critics arguing it’s a dangerous post-racial fantasy of an American Civil War in which equally oppressed white and black southerners rose up together against the decadent, capitalist north.

In 2014, the raised Mockingjay salute and protest marches are inevitably suggestive of scenes from Ferguson, Missouri – which saw riots follow the police shooting of black teenager Michael Brown last summer – as well as Ava DuVernay’s forthcoming civil-rights drama Selma. A nagging unease thus persists about the trilogy’s view of race and revolution.

The diverse casting, however, is one of the films’ standout strengths compared with the vast swathe of contemporary American genre cinema: as well as Ali as Boggs and Wright as Beetee, Mockingjay Part 1 features strong performances from Evan Ross as Messalla and Sarita Choudhary as Snow’s speechwriter Egeria, while Patina Miller has a scene-stealing turn as District 8’s Commander Paylor, her look and attitude echoing Lizzie Borden’s Born in Flames (1983). It’s a fair question whether the representation of the masses balances out the predominance of white A-list leads, and particularly the casting of a white performer as Katniss, the book’s dark-skinned figurehead of the uprising. Katniss’s song ‘The Hanging Tree’ inspires mixed-race groups of rebels to sabotage the Capitol’s white-armoured Peacekeepers, yet the song itself sounds distinctly Scots-Irish Appalachian. 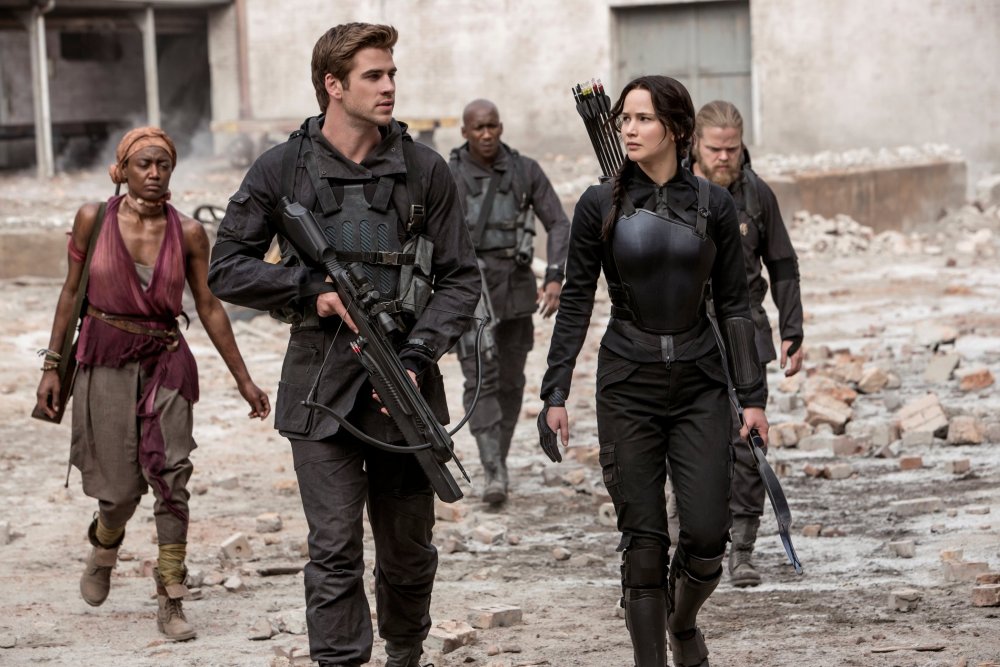 Jennifer Lawrence has deservedly won plaudits for her raw portrayal of Katniss, but in this third instalment, bar her stunning performance of the song, her physical and emotional expressiveness is stymied by the narrative. Too often she is trapped and stilled, not only by the Soviet-style regime of District 13 but also by a plot that makes her a traumatised figurehead and observer, sitting silently in meetings or waiting for Peeta’s return, without the counterbalance of the book’s first-person narration to dramatise her inner turmoil.

In its war games and their officers, Mockingjay Part 1 – unlike Catching Fire (2013) – definitively catches fire. But where Beetee’s broadcast to the Capitol is noise disguising the action of the raid, the film’s driving pace and showy set pieces threaten to drown out the centre of the story. And the story stands or falls with its central character. The mockingjay, stuck echoing the orders of the officer class, needs freedom to sing.