The Grandmaster: Wong Kar Wai returns with a martial-arts epic on the life of the legendary Ip Man. Plus Alejandro González Iñárritu’s Birdman and the resurrection of Michael Keaton, John Berger on Charlie Chaplin, the Marx Brothers, teapots – and our critics’ roundup of all the best movies of 2014.

In print and digital from 28 November. 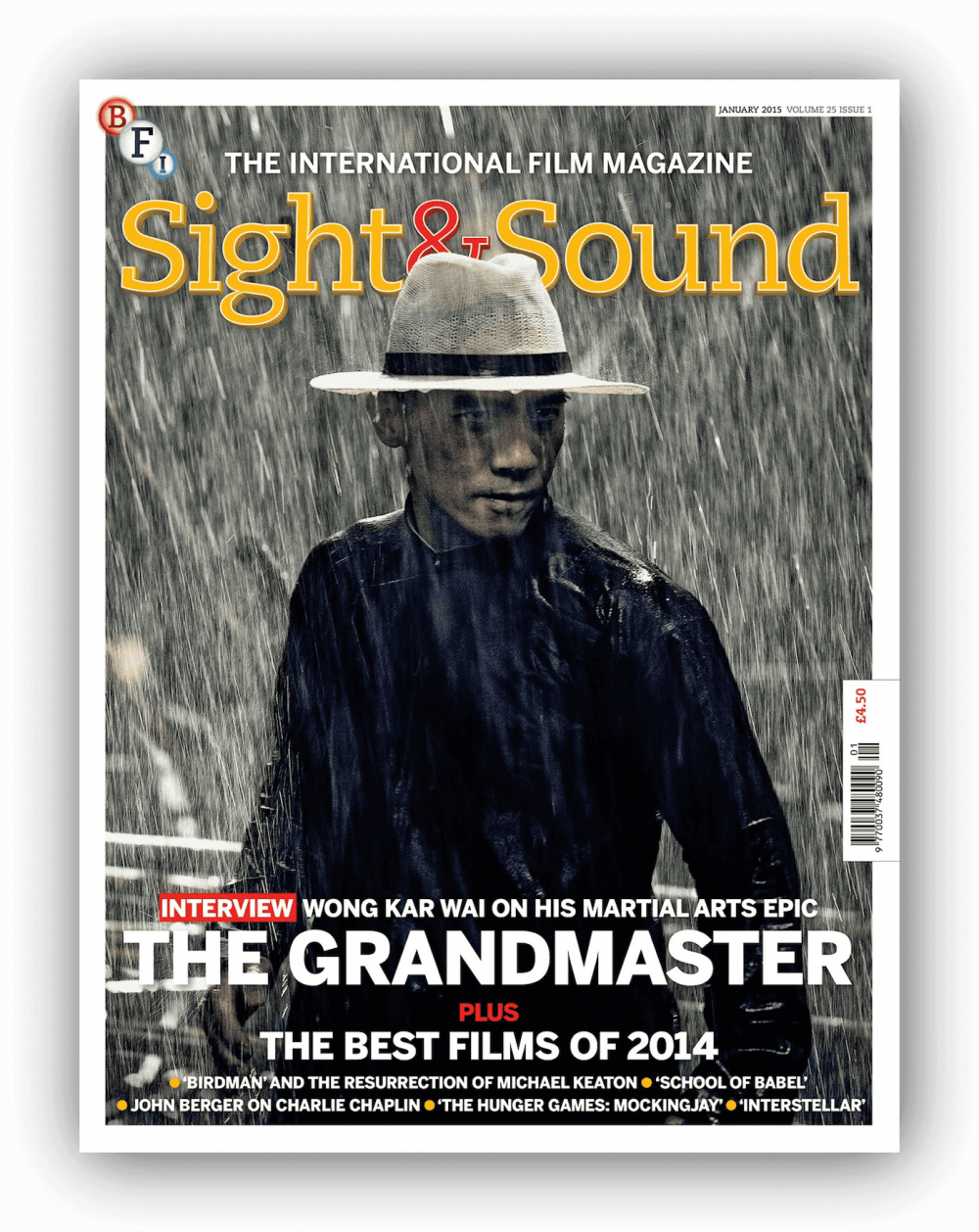 As 2014 moves into the rearview mirror, our new issue casts a look back, with more than 100 of our contributors reflecting on the trends and highlights in cinema and television, and casting their ballots for the outstanding titles of the year.

Has it been a vintage one for narrative cinema? For documentary? What have been the controversies, standout titles and stories that have shaped cinema? Nick James introduces our survey, while Kim Newman picks the year’s standout horror movies, Nick Pinkerton examines the year’s highlights in action cinema, Pamela Hutchinson looks at what 2014 had to offer fans of silent and archive cinema and Jonathan Romney asks whether 2014 demonstrated a steady decline in genuinely adult cinema.

As for our balloters’ top of the pops, you can see their consensus titles here online – and browse many more of their choices and comments across 13 pages of our issue.

December also sees the (very) long-awaited return of one of the key figures in world cinema, Wong Kar Wai, whose martial-arts epic The Grandmaster sees him tell the story of the famed martial-arts teacher Ip Man, and pay tribute to the kung fu movies he grew up with, while also moving into bigger-budget territory. The opulent visuals and unmistakeable sense of style remain, but does Wong’s narrative lose its way in the battle between style and substance, asks Tony Rayns?

Wong meanwhile talks to James Bell about the film’s production and his lifelong fascination with martial arts, while Leon Hunt explores the history of kung fu movies that showcase genuine fighting techniques alongside the fictional exploits of real-life historical martial-arts masters like Ip Man.

Another figure making something of a comeback this month is Michael Keaton, who stars in director Alejandro González Iñárittu’s Birdman as a onetime star of the fictional titular superhero franchise, now trying to reclaim some sense of personal and artistic integrity by appearing in theatre on Broadway. Paul Julian Smith explores how the film sees Iñárittu jettison the weighty metaphysical issues of his previous work in favour of a welcome lightness of touch, while Anne Billson celebrates the return of Keaton, a much-loved actor with an enormous range.

One figure who of course has never gone away is Charlie Chaplin’s Tramp, arguably the most instantly recognisable and beloved of film characters even today, a full century since he first lit up cinema screens. John Berger considers the enduring appeal of the characters and of Chaplin’s early films, and argues that not only have they lost none of their surprise, humour, bite or illumination, but that their relevance now seems more urgent than ever.

Our Wide Angle section includes a number of reports from this year’s Viennale, one of the essential events in the cinephile calendar, as well as a look at the varied, decade-long collaboration between Ennio Morricone and Pier Paolo Pasolini.

Reviews meanwhile gather opinion on all of the latest UK theatrical releases, including Christopher Nolan’s Interstellar, Denis Villeneuve’s Enemy, The Hunger Games: Mockingjay Part 1 and Manakamana. In DVD and Blu-ray, we welcome new discs of two of Monte Hellman’s unorthodox westerns alongside a spiffing new edition of Withnail & I and much more. And the Books section includes a new study of the work of Terence Davies and a collection on the life and work of Amos Vogel.

All this and more besides…

Wong Kar Wai’s respect for traditional martial arts is firmly in evidence in his vividly authentic The Grandmaster, which explores the life of the legendary wing chun teacher Ip Man. But does his narrative lose its way in the battle between style and substance? By Tony Rayns.

Plus: In the mood for kung fu

Wong Kar Wai explains his lifelong fascination with martial arts, why he was determined to bring a new realism to the genre, and why quality films, like the finest stews, should never be made in a hurry. Interview by James Bell.

Plus: The birth of a legend

The Grandmaster sits in a tradition of kung fu movies showcasing genuine fighting techniques alongside the fictional exploits of real-life historical martial-arts masters like Ip Man . By Leon Hunt.

Birdman, Alejandro González Iñárritu’s tale of an actor looking to get his career flying again years after walking out on a superhero franchise, sees the director jettisoning the weighty metaphysical issues of his previous work in favour of a welcome lightness of touch. By Paul Julian Smith.

Films of the year

Quality narrative cinema gets the usual thumbs-up in our 2014 poll, but some exceptional documentaries were arguably more important – while shifts within the industry,  particularly in its relationship with television, should make for an intriguing 2015. By Nick James

Plus: The year in review

Lists and comment by 50 of our year-end poll contributors.

Some notes about the art of falling

In the century that has passed since The Tramp first strolled into the frame on cinema screens, the world has changed deeply. Yet Charlie Chaplin’s early films have lost none of their surprise or humour or bite or illumination, and their relevance now seems more urgent than ever. By John Berger.

More or less about acting

In the frame: Sounds of the underground

Jazz signified liberation across the old Eastern Bloc but in Poland it emerged, with cinema, in the vanguard of a creative revolution. By Michael Brooke.

At once humble and elevated, tea’s signifying of both familial warmth and stiff snobbery makes for a neat cinematic shorthand. By Hannah McGill.

To mark a forthcoming BFI season, we offer a selection of moments that shows the dazzling breadth of the brothers’ anarchic genius. By Nick Bradshaw.

Interview: A world of difference

In the second half of my ideal film-school syllabus, the students would ponder sex, secrets and memory in films, and perhaps drop some acid. By Mark Cousins.

Making a British war film that fights shy of polemic called for innovative funding and the ability to steal a march on the MoD. By Charles Gant.

The death of Chris Collins, an experienced and talented BFI Film Fund executive, is a devastating loss to the British film industry. By Ben Roberts.

With the London Film School’s move to a new site imminent, its director Jane Roscoe looks forward to a new chapter in its history. By Geoffrey Macnab.

Viennale overview: Hands over the city

By skipping the hoopla of red carpets and celebrities, Vienna’s film festival can focus on what really matters: the cinematic image. By Kieron Corless.

The Viennale’s 16mm strand paid tribute to a format with a mixture of the canonical and the forgotten and sidelined. By Olaf Möller.

The transatlantic trade agreement known as TTIP could pose a threat to Europe’s long-cherished support of cultural pluralism. By Holly Aylett.

The latest Pordenone festival offered Russian comedy, a Barrymore family portrait and a splash of colour. By Geoff Brown.

Algorithms
The Best of Me
Birdman or (The Unexpected Virtue of Ignorance)
Black Sea
Bogowie
Bonobo
Bringing Tibet Home
The Circle
Diplomacy
Dumb and Dumber To
Eastern Boys
Electricity
The Face of Love
The Grandmaster
The Green Prince
Hello Carter
Horns
Horrible Bosses 2
The Kingdom of Dreams and Madness
Kon-Tiki
Manakamana
Mea Culpa
Me, Myself and Mum
Men, Women & Children
Merchants of Doubt
Nativity 3: Dude, Where’s My Donkey?!
Northern Soul
One Rogue Reporter
Open Bethlehem
Ouija
Redirected
School of Babel
St. Vincent
The Theory of Everything
We Are the Giant
The Woman in Black: Angel of Death

Way out west: The Shooting / Ride in the Whirlwind

Revival: Withnail and I Limited Edition

Withnail was the heavy-drinking blueprint for many male flat-share sitcoms – but sober reappraisal reveals it to be full of darker themes. Reviewed by Kate Stables.

This sensitive tale of divorced parents and their perilously ill daughter is one of the great French films about childhood tragedy. Reviewed by Neil Sinyard.

In Search of Lost Time: Terence Davies
Be Sand, Not Oil: The Life and Works of Amos Vogel
Hou Hsiao-Hsien
Nationalism and the Cinema in France: Political Mythologies and Film Events, 1945-95

John Schlesinger’s subtle, complex portrait of the painful break-up of a ménage-à-trois reveals more about Englishness than it does about sex. By Noel Hess.