Film of the week: Manakamana

Circling by a thread: ethnography and structuralism share 11 rides through the heavens in the latest revelation from Harvard’s Sensory Ethnography Lab. 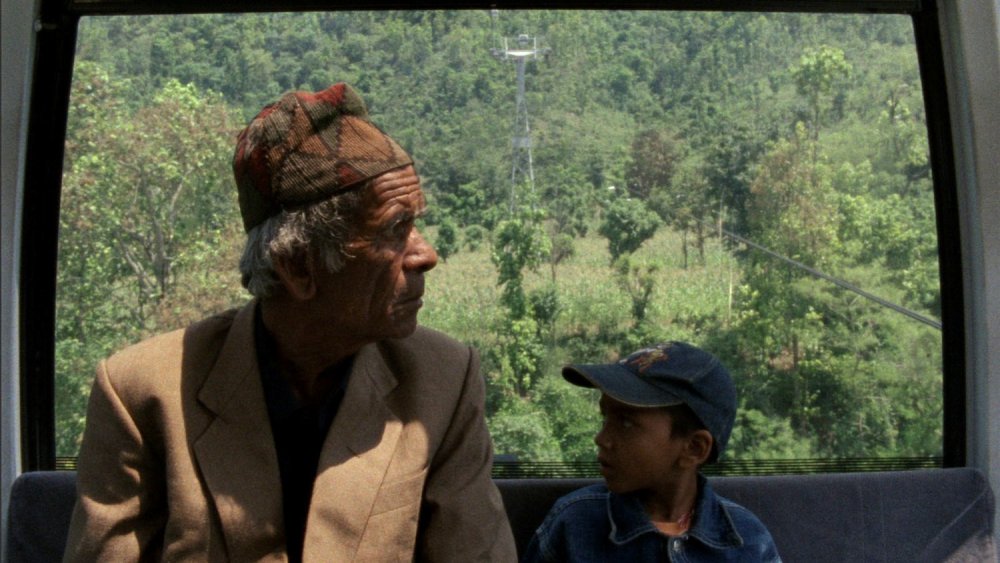 Though its subject matter doesn’t seem particularly fun on the surface, Stephanie Spray and Pacho Velez’s Manakamana is a sort of structural game, by turns contemplative and, yes, playful. It sets hard and immovable rules in place, then explores what is cinematographically possible within those constraints.

Spray and Velez limit themselves to working with large and unwieldy building blocks, Stonehenge-hefty hunks of footage. Their camera is always held to a fixed position, inside the cable car that transports Hindu pilgrims and tourists to the Manakamana Temple at the top of a Nepalese mountain ridge. Each shot in their film runs as long as a 400ft magazine of 16mm film, which is to say around 11 minutes. This is also, as it happens, the length of time it takes for the cable car to reach its destination: two mechanical apparatuses running in concert, individually going about their repetitive rounds.

The first half of Manakamana is devoted to ascents. Sometimes the camera is directed towards the face of the verdant ridge the car is advancing on, sometimes away from it, so that the valley the car has left is seen rolling away in the background.

The foreground is filled by the occupants of the car, who themselves provide the variety – in age, sex, race and the tenor of their emotional responses to the journey – that the self-imposed strictures of the film otherwise forbid. There is an old man with a young boy; two young women speaking English with American accents, one of apparently Nepalese background; a trio of very old Nepalese women in traditional dress, two of whom seem to share the same husband. Some of the passengers carry offerings for the goddess Bhagwati, such as the middle-aged woman with a basket of flowers and the older couple with a rooster. 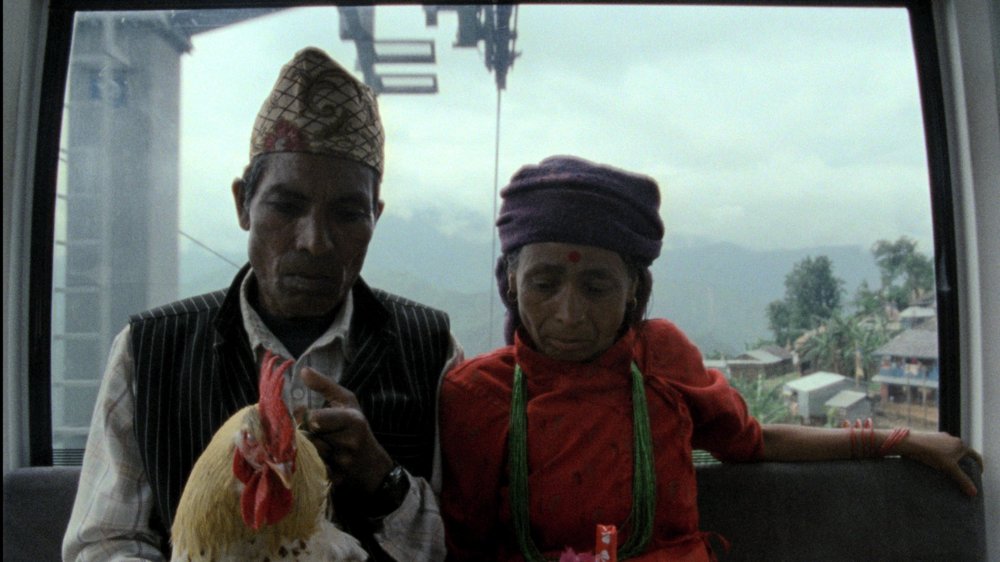 We even ride up with a cargo car containing only four goats, tethered together. We don’t see the fate of these goats but we can guess at it – especially when three twentyish long-haired guys in metal-head garb, evidently in a band together, get on with a mewling kitten and one jokes about sacrificing it. When the couple with the rooster reappear at the end of the film’s second half, which is all descents, we see its motionless feet poking out from the bottom of the frame.

Some passengers mediate their trip with digital cameras, others are meditative. Those in groups chat among themselves but also, implicitly, address the filmmakers and an unseen audience, using this stage to either speak their minds (the old women) or preen and perform (the metal-heads).

Eleven minutes is a long ride, however, and conversation ebbs and flows through the duration. Two traditional musicians, a sort of counterpoint to the metal kids, pass the time tuning and playing their instruments on the way down.

Many of the ‘performers’ evince nervousness – perhaps at being suspended high above the forest floor, perhaps at the camera’s presence, for the movie is very much a study in watching the self-consciously watched.

Despite the perilous altitude and the occasional shudders of the cable car, the nearest thing to a suspense scene involves a pair of women, presumably mother and daughter, trying to eat runny ice cream before it drips all over their hands. Often the passengers are left alone with their thoughts, and the viewer is alone with them to imagine what those thoughts might be.

The couple with the rooster are the only ones to appear twice, and their recurrence, breaking an established rule, makes a fitting point of closure. (Their foreheads are now anointed, and a solemn silence is upon them.) 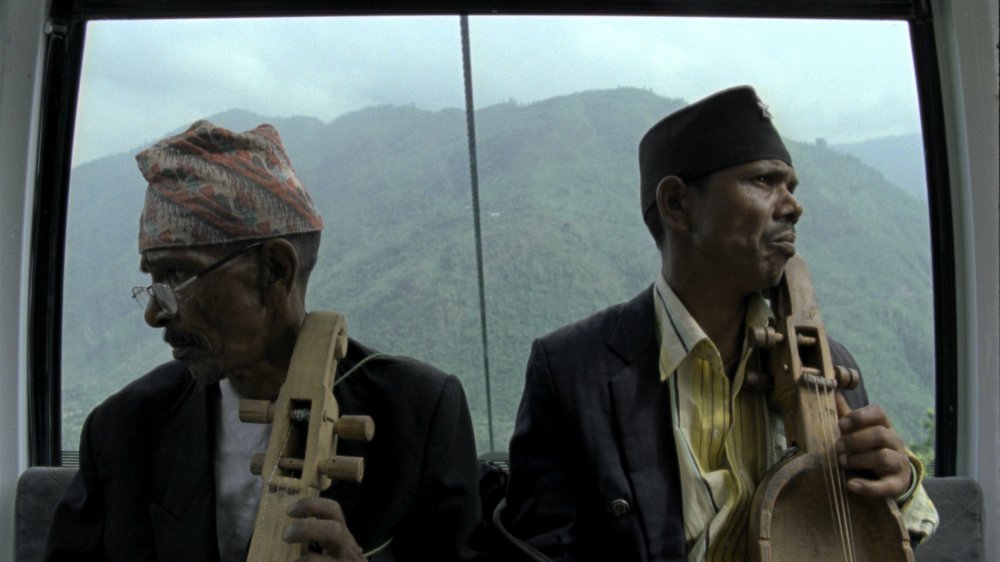 Spray and Velez made the film under the auspices of Harvard University’s Sensory Ethnography Lab. Their film’s credited producers are SEL founder Lucien Castaing-Taylor and Véréna Paravel, the co-directors of 2012’s Leviathan. That film in part forswore traditional viewfinder control through its use of GoPro cameras, with their ability to go where no cinematographer can, wriggling into tight spots, plunging into the sea or taking flight. Likewise Spray and Velez’s approach combines an element of chance (leaving the camera in a set position, to run out by itself) and an element of conscious construction (the selection and arrangement of material).

According to an interview with the filmmakers, Manakamana took 18 months at the editing stage – which is a lot of work to go through to achieve the appearance of unmediated happenstance. For some viewers, this may seem like a lot of work for nothing – and they wouldn’t be, strictly speaking, incorrect. Remaining in flux throughout, coming or going, the audience never enjoys the payoff the passengers do: the actual Manakamana Temple, the film’s structuring absence.

But that nothingness is an inviting, liberating space for both viewer and subject to think. Older passengers note changes in the landscape; younger ones the disused mountainside trail that others remember climbing in bygone days. The couple with the rooster discuss the replacement of thatched roofs by slate, slate roofs by tin. Manakamana isn’t a eulogy for old ways but rather a film of circles within circles, duration within duration, a cable line within a lifeline. Putting us through the passage of 11 minutes repeatedly, it allows us to glimpse something about the passage of years.

Related to Film of the week: Manakamana