Even at the knottiest reaches of deep space-time, Christopher Nolan’s intergalactic pioneer vision is still 100 per cent corn-fed. 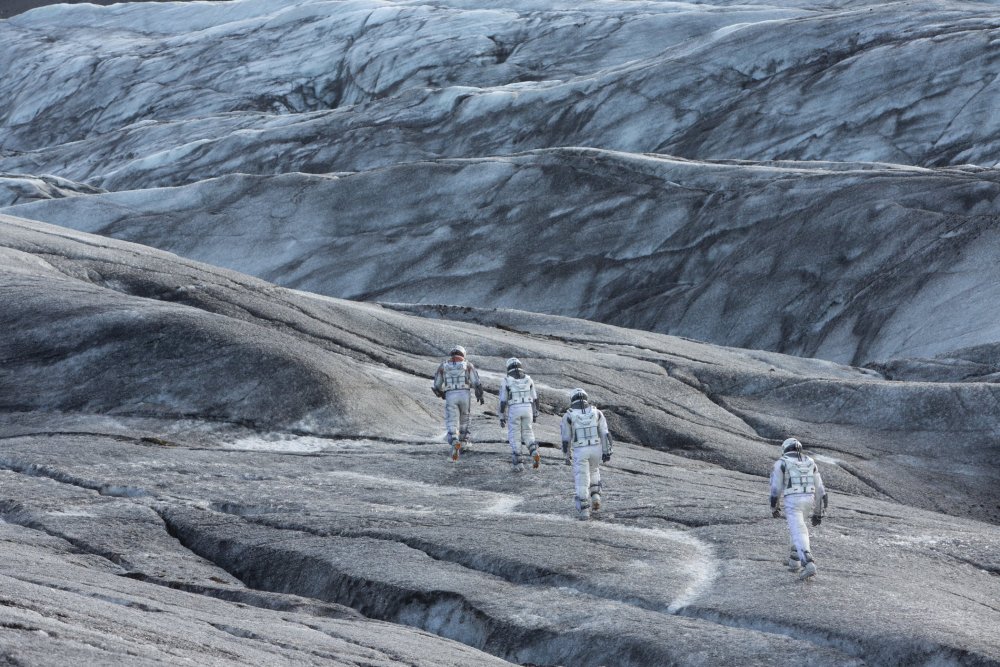 Christopher Nolan is, by almost any standard, a monumental figure in the landscape of contemporary cinema. He has enjoyed a near-unblemished track record of massive box-office success for going on a decade. He has remained committed to shooting on film in the face of an almost industrywide shift towards digital, which he has been a most reasonable voice in opposition to, and he has used his pull to make sure that cinemas equipped to project his latest, Interstellar, in either 35 or 70mm, will get first dibs on playing it for a paying audience. As the blockbuster has become increasingly formulaic, made-by-committee, and dependent on tie-in world-building – see for example Marvel Films’ recent unveiling of their release strategy for the next several lifetimes – Nolan, after his three Batman films, has evinced an interest in making big movies that are self-contained, freestanding edifices, bearing a personal imprint.

All of this is, on paper at least, to the good. So it is without great relish that I must report that Interstellar, like Inception before it, is a movie that feels like being tangled up in a pile of infinitely-unfolding some-assembly-required instructions in the watching, full of dialogue that’s like the recital of a How To manual.

As in Inception, there is a lot of explaining-what-is-going-on-right-now-at-great-length in Interstellar, though happily this time most of the exposition comes from Matthew McConaughey and Anne Hathaway at their most appealing, rather than from Leo DiCaprio in the dregs of his bottomless-anguish phase. The movie gives McConaughey at least one knockout, Oscar-reel scene, though the premise behind it is so intrinsically moving that it would almost be impossible to fudge.

Leading a desperate, last-ditch-attempt mission to find a new, habitable home for the residents of a fatally-blighted earth, McConaughey’s space pilot Cooper (as in Gary) and Hathaway’s scientist Amelia (as in Earhart) Brand touch down on a candidate planet where, for every hour they spend on the surface, seven years will have passed in earth time. Returning in their landing craft a few hours later to dock in the orbiting space station – it looks like a lazily-revolving sprinkler spigot – Cooper catches up on his video messages from earth from the son and a daughter, Tom and Murphy, who he left behind as children, and who’ve now grown to become his near-contemporaries. (They’ve aged into Casey Affleck and Jessica Chastain, respectively.) 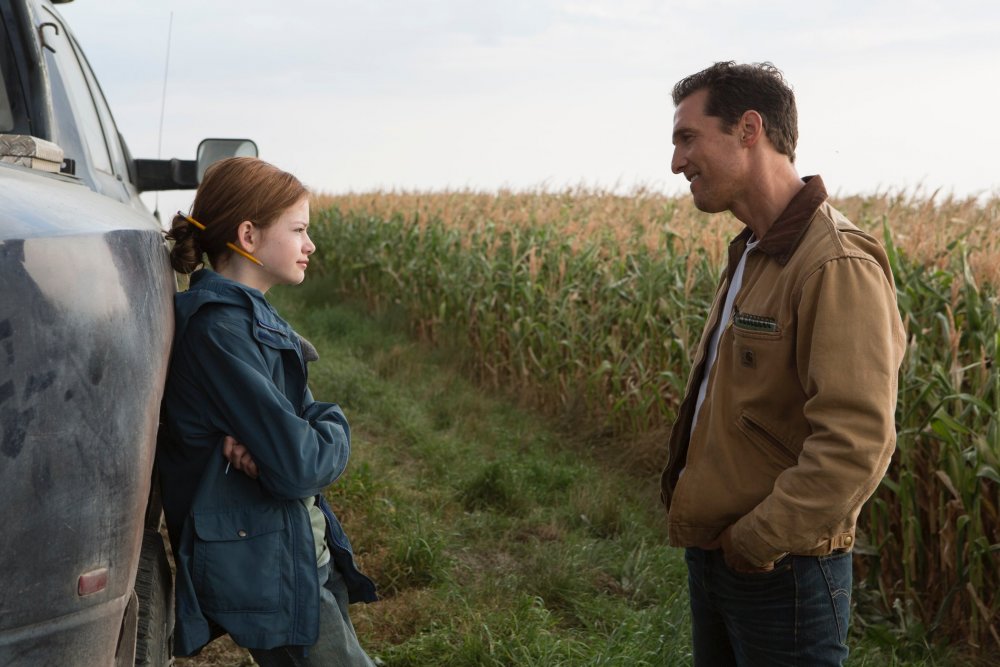 McConaughey’s emotional dam burst at this moment is ragged and startling, and for this moment, at least, Nolan realises his movie’s evident ambition – to create a work at once intimate and cosmic in scope, in which the fate of humanity depends on what happens in one little girl’s bedroom, and the survival of the family of man hinges on one man’s family. When Cooper first decides to take on the mission which may very well separate him from his children forever, the roar of his Dodge Ram pickup blasting down the gravel driveway matches to the sound of his shuttle taking off – leaving earth is almost an afterthought after leaving home.

In Interstellar, the business of saving humanity is very much a local matter. Cooper and Murphy’s pained parting begins when inexplicable forces lead ex-astronaut-next-door Cooper to the headquarters of NASA, seemingly just a couple of counties over. Until Cooper takes leave of his home planet, presenting the opportunity for an orbital perspective, the movie shows us nothing more of that planet than a John Cougar Mellencamp-esque version of the American heartland, Smallville in extremis. This is all that remains after a mass depopulation in the wake of a crop blight which affected every staple but corn, which has forced America (and presumably whatever is left of the rest of the planet) to dedicate itself completely to agrarian pursuits. Nothing is heard of the wider world, or even the big cities of the United States – though we do see the New York Yankees, reduced to a barnstorming team playing Little League-sized ballfields.

The mood is very much loss-of-national-purpose-and-resolve, faded stars-and-stripes downbeat in the key of Merle Haggard’s Are the Good Times Really Over, with McConaughey kicking back on his porch and musing “It’s like we’ve forgotten who we are: explorers, pioneers, not caretakers.” Even the school textbooks actively discourage big dreams now, teaching that the moon landing was faked to bankrupt the Soviet Union. It’s a cheap, baldfaced appeal to a battered sense of American pride that belies the movie’s cerebral pretensions, and when the head of the exiled NASA, one Dr. Brand (Michael Caine) – Amelia’s father, as it happens – tells long-earthbound space cowboy Cooper “I can’t tell you any more unless you agree to pilot this craft,” it feels closer to Michael Bay’s Armageddon than to a certain movie in the Kubrick catalogue. 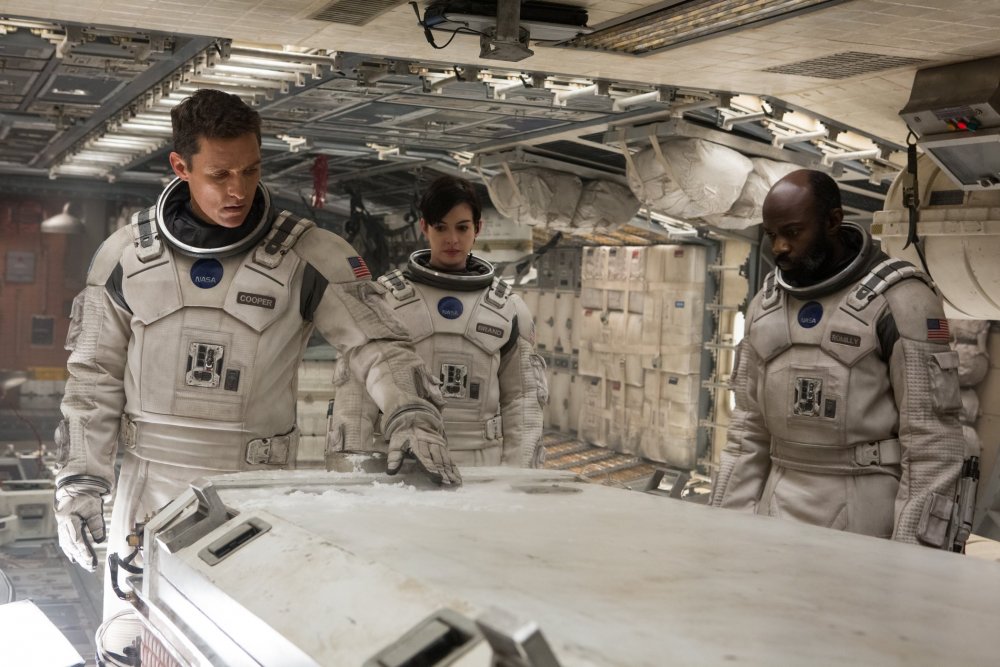 Interstellar can do awesome, as you’d hope a film that commanded the resources of two major studios (Paramount and Warner Bros.) should. The movie, which I saw as it was meant to be seen, on a three-storey IMAX screen, is striated with images conveying sheer vastness: Cooper’s family farm a lone beacon in the country night, devastating dust storms and tidal waves approaching on the horizon, Cooper’s craft dwarfed in passing near the rings of Saturn. There is a marvellous set piece that begins with a flailing fight for the future of humanity on the stark surface of a distant, dead planet – something like the end of Von Stroheim’s Greed in spacesuits – and ends with Cooper docking his landing craft to a spinning-out-of-control station which ranks as the single greatest accomplishment of Nolan in his master-engineer mode.

As spectacle, Interstellar is a fitful success. Nolan, however, isn’t content with Ooohs and Ahhhs. Pursuing a passion for involuted chronology which dates to early efforts with longtime co-screenwriter brother Jonathan like Following (1998) and Memento (2000), their Interstellar is contorted around various temporal shifts. Early on we’re shown talking head interviews with elderly eyewitnesses who are evidently survivors of the earth’s death, speaking of the present in which the film opens as a distant past, and thus giving the movie a long-view perspective, actively nullifying any suspense as to the question of humanity’s chances of enduring. Later, when Cooper stumbles onto a line of communication which allows him to deliver messages to earth across time and space, Nolan comes very near to the territory of Inception, using state-of-the-art special effects – here a mise-en-abyme pseudo-Borgesian library – to create visual corollaries to the birth of inspiration. The climax, I fear, requires Chastain to hoot “Eureka!”

What can you say about an artist who, when seeking to celebrate revelatory vision and the indomitability of the human spirit, goes about doing so almost entirely through cliché? Caine’s Dr. Brand giving a hoary recital of Dylan Thomas’s Do Not Go Gentle Into That Good Night provides the movie a sort-of refrain – “Oh Captain! My Captain!” was, of course, already taken. The comic relief is courtesy Cooper’s blocky robot companion TARS, whose wisecracking is dictated by the level of his humour setting. This is seemingly meant as a play on the formulaic nature of screenwriting – the executive request to “Dial up the comedy a little” – but the self-aware acknowledgement doesn’t make it any less formulaic, nor does it make the no-fun Nolans any more adept at lightening the mood. 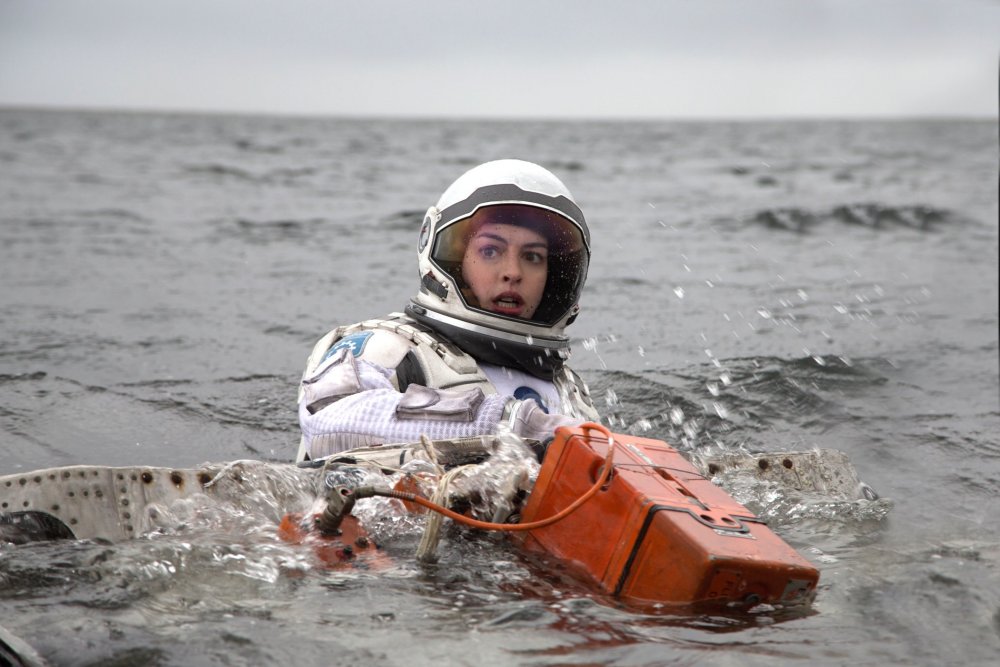 Where skeptics like myself will cry cliché, Nolan’s partisans will undoubtedly see an artist working in the powerful, primal medium of archetypes. But archetypes need a hard and clear glint, so to be comprehensible at a glance, while Interstellar proves true to Nolan’s habit of swaddling his movies in layers of exposition and explanation, here effectively dulling the emotional effects of his last act.

A recent New York Times profile exalted Nolan’s micromanagement, but in practice it makes for rather suffocating storytelling – with the punctilious explanations he has his actors narrate, he’s like an over-solicitous host whose attention keeps you from ever getting comfortable. Consequently, when Cooper, still a fit fortysomething, is reunited with his daughter, now a very old and dying woman, the scene is considerably less persuasive and moving than that between Chris Evans’s unfrozen Captain and Hayley Atwill’s Peggy Carter, his sweetheart from the WWII days, in this year’s Captain America: The Winter Soldier – the very cookie-cutter entertainment that Christopher Nolan is supposedly saving us from.

In a hopeless multiplex present, Nolan has been tasked with the impossible job of leading the way to a better future, providing the legendary ‘blockbuster with brains’. With the year’s umpteenth paean to the nigh-supernatural power of fatherhood, all he’s provided is another harvest of corn.