Johnny Depp takes over the internet in a rickety nightmare of the Now. 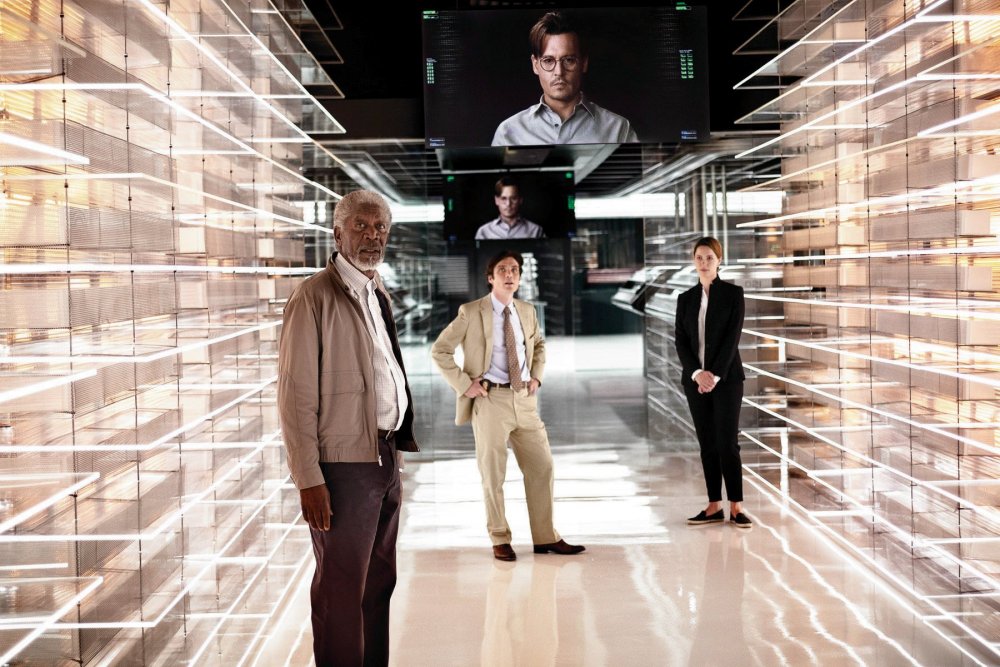 Get with the program: Johnny Depp floats over his co-stars as artificial intelligence expert Will Caster, who has his mind uploaded to a computer

An event Hollywood sci-fi movie without aliens, robots or gun battles, Transcendence has a topical inevitability – it’s as if, in keeping with the film’s premise, the technological reality of 2014 had gathered and made a movie about itself. ‘Ripped from the headlines’ is now ‘lifted from the cloud’.

For many of us, the film’s premise – the internet as maniacal über-brain, watching and controlling everything and everybody – will closely evoke the uneasiness we experienced last year or the year before about whatever bump in techno-craziness it was that crossed our inner boundaries but which we insisted on sublimating. Just contemplating how much autonomy, free time, culture and privacy we’ve surrendered over the past ten years or so, all in the name of technological progress and the convenience it bestows, can chill the blood, if you’re so inclined. If you’re not, you may be actively beckoning the future, even as it invades your home, dreams and physiology. The argument, in and out of academia, often resembles a young-versus-old debate about music or body mods or extreme sports: should we value the conventional and sensible, or dive in and sacrifice everything for what’s next, because it’s destiny?

Certainly, we’re looking at Philip K. Dick’s under-the-skin prophecies coming mundanely and complacently true – so much so that Transcendence barely feels Dickian at all, because the twisted irony of things ‘Dickian’ is merely the new Google Glass normal. Transcendence welcomes all these perspectives into its rather shaky tent, and for that alone this pallid and self-serious genre trifle deserves some attention. 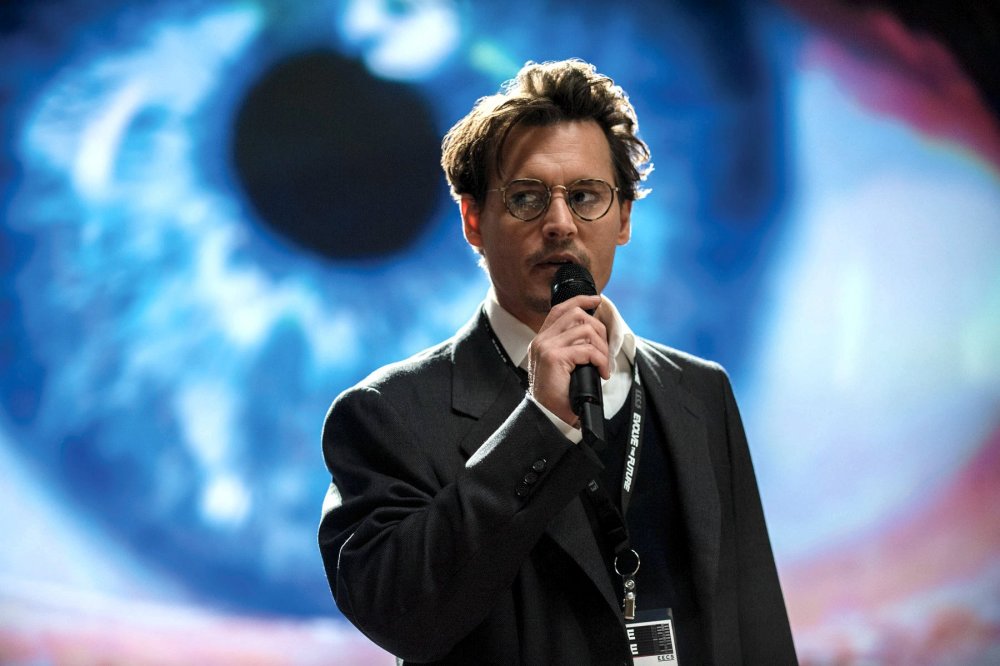 Science fiction is a cultural app with many functions, even if its capacity for videogame imagery is all that usually seems to interest the Industry these days, and so an encouraging way to watch cinematographer Wally Pfister’s directorial debut is to imagine it miles away from the 21st-century A-list and instead on a B-movie drive-in screen in the 60s, when genre pictures often had so few resources that pungent ideas became the only grist in the mill. For all its gloss, hipster pretensions, plot craters and sometimes risible attempts at action, Transcendence traffics in large, troublesome ideas about Right Now and What’s Ahead, even if the film itself is far too timid and compromised to do those hairy questions justice.

One shouldn’t, I think, get too caught up in the fake techno-textures – the TED-ish conference on AI, the constantly scrolling code screens, the resorts to first-generation-laptop jargon – just as one wouldn’t kvetch about the immobile phones in 2001: A Space Odyssey. In Pfister’s scenario, from a seemingly worked-over screenplay by Jack Paglen, the arc is classic Frankenstein, and therefore both predictable and relevant. Johnny Depp’s mumbly AI genius Dr Will Caster has his heartbroken wife Rebecca Hall upload his consciousness on to a mainframe from his deathbed, thereby freeing his brain to roam the internet and, almost immediately, exploit it for wealth, power and growth for growth’s sake.

The internet is, in the abstract, nothing if not an invitation to cosmic megalomania. You may, as I did, recall the queasy loss of control emanating from Joseph Sargent’s Cold War nightmare Colossus: The Forbin Project (1970), about an aggressively sentient super-computer – though Depp’s mega-mind is more beneficent, perfecting nanotechnologies that heal human flesh and environmental scarring but instilling fear in dullard wetwares (buddy Paul Bettany, scientist Morgan Freeman, FBI shrugger Cillian Murphy) anyway, simply because of the limitless scope of his power. 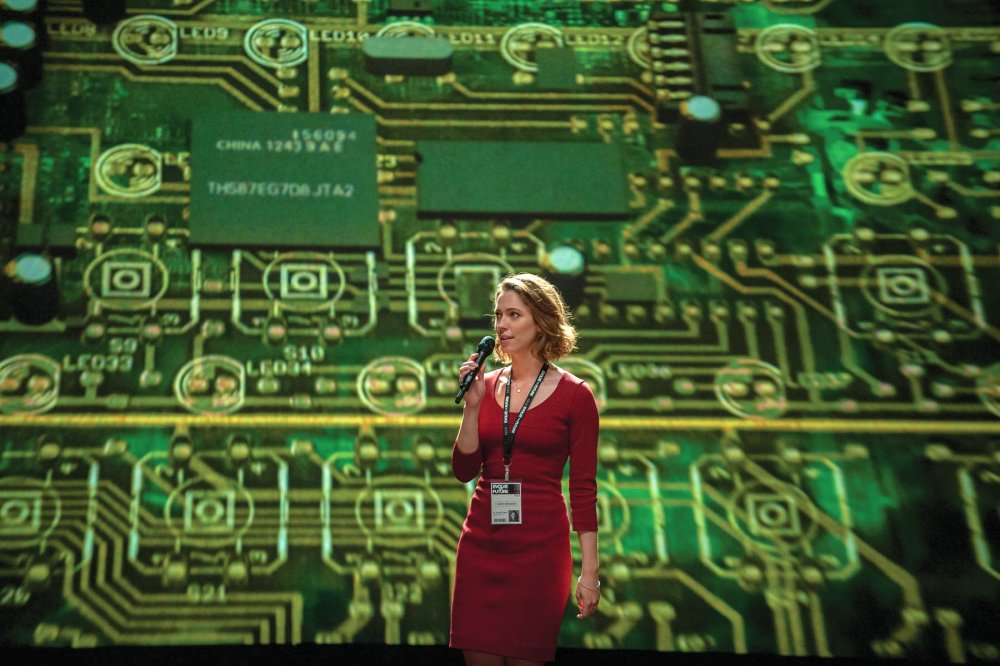 As a society, must we embrace every computerised advance ever made? And if you think so, what socio-philosophical reasoning is there to support that presumption? Why isn’t it worth weighing what’s lost? Pfister’s movie glances off a great many vexing issues, and though its old-school fear-of-science structure can seem half-baked, I’m glad a mainstream movie has dared to doubt the intractable goodness of virtual life.

Unfortunately, this line of inquiry must turn political, and the film’s narrative materials – primarily, a Luddite underground terrorist movement convinced of AI’s pernicious evil and prone to assassinating scientists – are confused at best. Every character is saddled with a vague sense of wary suspicion about Caster’s new incarnation as a super-program – even, eventually, Hall’s tremulous love interest. But the closest thing to a point of view the film exhibits eventually settles with the terrorists, who succeed (not quite a spoiler, as it’s made clear in the prologue) in wrecking the world’s electronic infrastructure with a single intravenous injection.

An injection, we should point out, of software virus, which gives you an idea of Transcendence’s vast plot holes and superhuman leaps of logic, which can spoil your engagement with the film’s conceptual gameplay, just as logic voids can in nearly any Dick story. For most viewers, the problem with Transcendence will begin and end with Pfister’s unschooled approach to dramaturgy, here savagely limited by the lifeless spectacle of people looking at and talking to computer screens, spouting bogus dialogue in explanation of cascading data we have no chance of gathering. 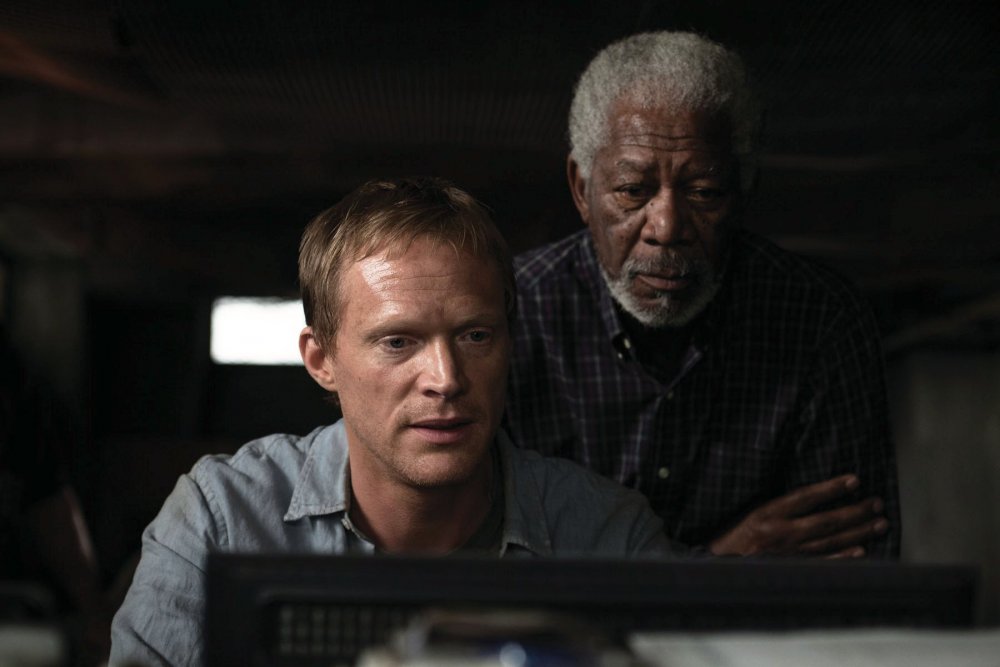 When it does get interpersonal, Pfister sticks to his mentor Christopher Nolan’s strategy of two people facing off in mid-shots, six feet apart in a shadowy space. It doesn’t help that Depp, who puts in all of maybe three days’ work in a largely supporting role, appears slurrily hungover throughout, even at the peak of health, leaving Hall with all the heavy lifting in the impossible role of a not-quite-obsessed obsessive who becomes understandably disenchanted, years on, with her virtual lover looking drowsily down at her from flat screens on every wall.

Nolan’s influence is also felt in the editing room, in so far as every scene is trimmed to an abrupt fact-delivery blip, accumulating in an undramatic flow that’s both hurried and lugubrious. Gaps in the story are left to gasp like fish on the dock. (Bettany’s ambivalent crony gets kidnapped by the terrorists, and no one seems to notice, for years, while just the sheer mention of ‘nano’ something or other allows Caster’s consciousness to alter matter at will – but only to an unexplained limit.)

The details of the film are half scanted and half absurd, and in the US that vulnerability has doomed Transcendence to gang-predation by critics. But you can’t help but wonder if the film’s larger worries, even the unintentional and implicit ones (as in, are you sure that universal connectivity won’t turn into a threat, and soon?), might not loom in time, as the veracity of minutiae becomes yesterday’s gripe.

But maybe not. Like Spike Jonze’s Her, Transcendence is so predicated on contemporary consumer technology that its thematic dynamics might be as outdated by 2015 as its programming particulars. The ten-minute-ahead sci-fi strategy has become strangely delicate, in a media culture where the hardware itself gets upgraded into obsolescence every 12 or 18 months. You watch: both films, one beloved so warmly and the other deplored so lazily, will in a few years be completely and equally forgotten. Reality will be something else.