In our Studio Ghibli special issue, Miyazaki Hayao takes flight with The Wind Rises; plus David Thomson on the cinema of World War I, Jia Zhangke on A Touch of Sin’s portmanteau of contemporary violence in China, Amat Escalante on Heli’s unflinching take on Mexico’s drug war and the S&S Interview with the ‘Italian Hitchcock’ – art-horror’s own Dario Argento.

In print and digital from 2 May. 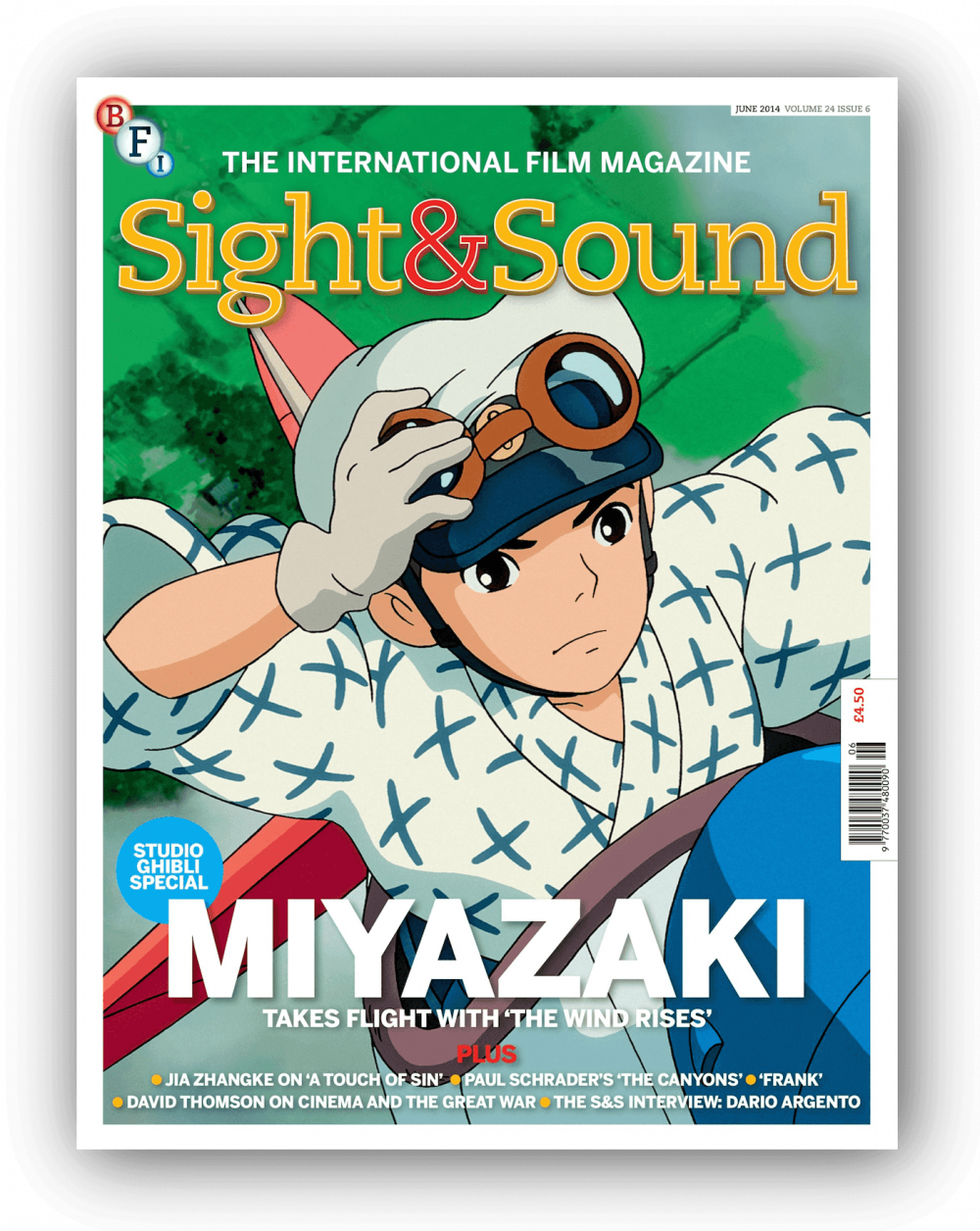 Humankind has been flying almost as long as it has been filmmaking, but we’re only just waving farewell to the cinema’s greatest poet of flight. Studio Ghibli’s resident genius Miyazaki Hayao has made pigs, witches, post-apocalyptic princesses, catbuses and castles fly, in wild, fantastical, heroic fables that have made our hearts soar. Now, with The Wind Rises, he has signed off with perhaps the film he has spent his career trying not to make: a resolutely sad, realist period fable of a boy who dreams of flight, and pursues that dream into adulthood – becoming the designer of Japan’s famous Zero fighter plane, with which his country launched, kamikaze-style, the War in the Pacific.

Posted to subscribers and available digitally 2 May

On UK newsstands 6 May

As Nick Bradshaw explores in our special issue saying sayonara to Miyazaki-san, this fictional biopic of the real-life Horikoshi Jiro is Miyazaki’s most personal as well as his most pessimistic. It honours the era of Miyazaki’s father, who manufactured parts for the Zero plane, paying close heed to the traumas of the age (from earthquakes to tuberculosis) as well as of Japan’s transition to modernity, and recreates all this through a weave of allusions to modernist art and literature. Helen McCarthy investigates that wide web of influences on Miyazaki’s work, from Kurosawa and manga to Moebius, Russian landscape painting and Swallows and Amazons, while two of Miyazaki’s long-term Studio Ghibli collaborators, Kosaka Kitaro and Suzuki Toshio, relate their experiences of working with the master. Meanwhile, Jasper Sharp scans the horizon for the anime talents who might step into Miyazaki’s shoes.

The clouds of modern history and politics darken much of this month’s features. “We are mobilised and we have been for 100 years just as we are accustomed now to the regularity of senseless destruction,” writes David Thomson at the conclusion of his survey of a centenary of movies about the First World War – finding much of that cannon guilty of sentimentality, clichés, romanticism, political simplicity, ignorance and an inability to capture the fear or chaos. Still, he gives us a mammoth and salutary survey.

And the best of this month’s new features consider the present-day violence in two countries still undergoing new forms of modernisation and its attendant dislocations, China and Mexico. A Touch of Sin (which you may remember riding high in our critics’ poll of the , even before its UK release) is Jia Zhangke’s return to scripted fiction filmmaking after eight years of experiments with documentaries and docudramas. It’s a quartet of torn-from-the-social-media-headlines stories of violence from up and down China, abstracted partly through the style of martial-arts genre films of King Hu (Dragon Gate Inn, A Touch of Zen) and partly through that of traditional Chinese-temple murals. “My aim is to emphasise the inevitable but hidden connections between people rather than the randomness of our encounters,” Jia tells Tony Rayns. “The essence of a martial-arts film is a story of rebellion against a social order or against social taboos, A Touch of Sin reflects real-life violence.”

In Heli, meanwhile, Mexico’s Amat Escalante (Sangre, Los bastardos) takes the opposite tack, aiming to reflect the reality of the violence of Mexico’s drug wars with unflinching realism. “Cinema is to see things, you know?” he tells Jonathan Romney. One thing is the idea of those things, when you read it in a newspaper – it’s different if you see it and are confronted by it, and you almost feel it viscerally.” In this drama of a working family rent asunder by the advent of a drug package in their home, there’s a particular, unforgettable scene of gang-torture which threatens to overwhelm the rest of the film – but beyond it, Romney finds, there are complexities, respite and compassion to cling to.

Our final feature is the Sight & Sound Interview with art-horror’s own Dario Argento (Suspiria, Tenebrae), who talks Pasquale Iannone through a career that has ranged from co-writing Sergio Leone’s Once Upon a Time in the West with Bernardo Bertolucci via collaborations with George A. Romero to recent work in television and with 3D. But there’s more! And it spans Charlie Chaplin, Cecil B. DeMille, Frank Borzage, Hollywood directors in World War II, McCarthy exiles in Europe, Henri Langlois, the sounds of Nashville, Tessa Ross, Ryan Trecartin and Nawapol Thamrongrattanarit – plus Mark Cousins on class, and Hannah McGill on shoes…

The Wind Rises, a fictional biography of the designer of Japan’s famous Zero fighter plane, and the swansong of Japanese director Miyazaki Hayao, is a movie unlike any he has made and yet absolutely true to his preoccupations. Here we look back at the turbulent dreams of flight, freedom and progress in the great Japanese animator’s films. By Nick Bradshaw.

+ Drawing on the past

+ Lessons from the master

+ The king is dead

Now that Miyazaki has announced his retirement, where are the Japanese animators who can carry on in the same tradition – and where are the ones who can start something new?  By Jasper Sharp.

The old and the new

Jia Zhangke’s Cannes prizewinner  A Touch of Sin brings a touch of genre filmmaking to a daring anatomy of violence in present-day China. By Tony Rayns.

Simplistic politics; racial clichés; an over-reliance on chivalry, heroism and romance; and an apparent reluctance to capture the true terror in the stricken gaze of its soldiers – have the films addressing the slaughter of World War I done justice to the enormity of the tale being told? By David Thomson.

Amat Escalante’s unflinchingly brutal drama Heli reflects the director’s desire to bear witness to the reality of the violence of Mexico’s drug wars. But amid the depiction of everyday horrors and casual torture, a deeper note of humanity and hope emerges from the gloom. By Jonathan Romney.

Beginning his directorial career with a trio of stylised murder mysteries that led him to be dubbed the ‘Italian Hitchcock’, Argento graduated in the mid-70s to full-blown horror, proving a lasting influence on younger filmmakers. Here, he recalls his youthful success as a film critic, his early collaboration with Bertolucci and Leone, his debt to Antonioni and Lang, and his ongoing desire to experiment with form. Interview by Pasquale Iannone.

In the frame: Stiff competition

Beyond the anticipation generated by the usual auteur heavyweights in Cannes’ Competition, it’s a significant year for UK talent. By Jonathan Romney.

Object lesson: If the shoe fits

From Oedipus to Black Swan, nothing says more about a mother than the shoes she puts on her child’s feet. By Hannah McGill.

The five key…: Films by musicians

Film and music are intimately connected, but the leap from sound studio to film studio is not easy to make. By Sam Davies.

First sight: Memories are made of this

Thai director Nawapol Thamrongrattanarit portrays a digital generation who can’t recall this life, let alone past ones. By Trevor Johnston.

Once upon a time, cinema was happy to ride the whole range of class experience. But lately, fences have been put up. By Mark Cousins.

Tessa Ross’s departure from Film4 has left a big gap in the film industry – and some big questions about what comes next. By Ben Roberts.

An innovative exhibition at the Cinémathèque française, France’s temple of cinephilia, pays tribute to its founding priest, Henri Langlois. By Michael Temple.

Soundings: Better than the real thing

Ronee Blakley’s albums provided the soundtrack to Robert Altman’s Nashville but their shifts in tone hold more than curiosity value. By Frances Morgan.

Over the course of a single year a century ago, Cecil B. DeMille refined his craft and helped define Hollywood. By David Cairns.

Marked by both hyper-acceleration and inertia, Ryan Trecartin’s movies offer windows on to an absurdly amplified ‘future now’. By John Beagles.

Performance enhanced: White of the Eye

Donald Cammell left behind the louche underworlds of London to channel his delirious visions into genre pictures for US studios. By Kim Newman.

All is lust: Querelle

Completed just before his death, Rainer Werner Fassbinder’s take on a Jean Genet murder tale is an eerie, feverish musing on male longing. By Charlie Fox.

Ace in the Hole
The Big House
Celluloid Man
The Children’s Film Foundation Collection: Runaways
Fragments of Kubelka
The Garden of Words
Le mani sulla città
Men in War
The People vs. Paul Crump
The Sicilian Clan
The War Lord
What Price Hollywood

Five Came Back: A Story of Hollywood and  the Second World War by Mark Harris

Footlights with The World of Limelight by Charles Chaplin / David Robinson

Jeremy Thomas Down Under, with corrections; Under the Skin vis-à-vis Eduardo Mendoza, Rudyard Kipling and Tommy Cooper, and in defence of Visitors’ talking heads – and Wes Anderson’s German.

Ace in the Hole