Film of the week: Frank

Knocking on the head of genius: Lenny Abrahamson’s biopic manqué of Frank Sidebottom, based on screenwriter Jon Ronson’s memoir of playing in the musician’s band, shows us the impenetrable layers of papier-mâché between us and our heroes. 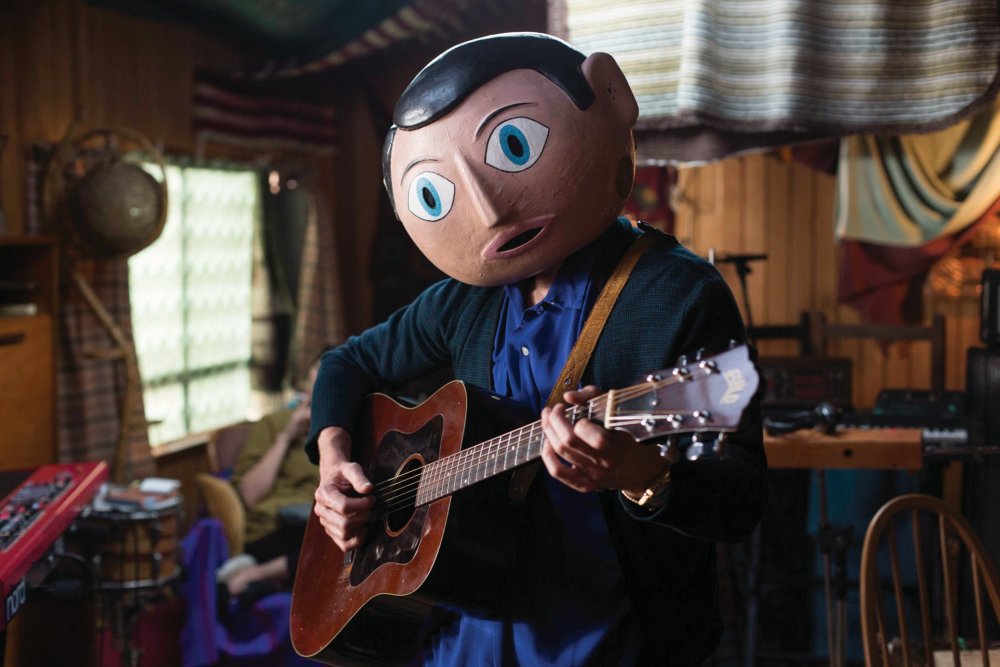 Frank Sidebottom was a musical performer who combined parched Mancunian wit with avant-garde nuttiness and vaudevillian showmanship. His most striking feature was his spherical papier-mâché head with its painted-on features: saucer-sized blue eyes, pursed ruby lips and slicked-down, side-parted black hair. Created and portrayed by the late Chris Sievey, who died in 2010 aged 54, he epitomised the northern overlap between indie, punk and music hall along with the likes of Half Man Half Biscuit, John Cooper Clarke, Vic Reeves and Peter Kay’s Phoenix Nights.

The journalist, author and broadcaster Jon Ronson wrote an article about his own spell in the late 1980s as a keyboard player in Frank’s Oh Blimey Big Band. This has now become the basis for Frank, co-written by Ronson and Peter Straughan (who collaborated previously on a screen adaptation of Ronson’s non-fiction book The Men Who Stare at Goats).

It marks a return to the study of tensions between the marginal and the mainstream for the Irish director Lenny Abrahamson. His last picture, What Richard Did (2012), focused on a young rugby player whose dazzling prospects are jeopardised when he commits a spontaneous act of violence. Prior to that, Abrahamson’s protagonists had been outsiders: the junkies of Adam & Paul (2004), the petrol-station attendant with learning difficulties in Garage (2007). Like those characters, Frank is at once in the world and hidden from it. Sequestered within that cartoon head he is simultaneously eye-catching and invisible.

The film, which is dedicated to Sievey, retains the rudiments of Frank’s story; other aspects have been fictionalised. Frank is now American, while the music of his group The Soronprfbs (it’s a running joke that even the band members don’t know how to pronounce the name) exudes not the real Frank’s amateurish Bontempi sensibility but the chugging, single-minded grind associated with The Fall or Krautrock bands Neu! and Can. Meanwhile his psychological condition aligns him with rock dropouts and outsiders such as Daniel Johnston and Syd Barrett. “What happened to him?” asks Jon (Domhnall Gleeson), the band’s keyboard player, near the end of the picture. “Nothing ‘happened’ to him,” Frank’s father replies, deflating any zaniness that has accumulated. “He has a mental illness.”

It isn’t exactly that this fact has been kept from us – more that it is one of several uncomfortable truths the film cleverly hides in plain sight. Until the final scenes, Frank’s behaviour is played either for laughs or a plangent strangeness. A pleasurably baggy section in the middle of the picture is devoted to a year-long recording session at a remote log cabin, where Frank’s mixture of perfectionism and eccentricity becomes both liberation and endurance test for the band. Its manager Don (Scoot McNairy) even commits suicide at the end of it, hanging himself while wearing one of Frank’s false heads, initially prompting fears that Frank himself is dead. 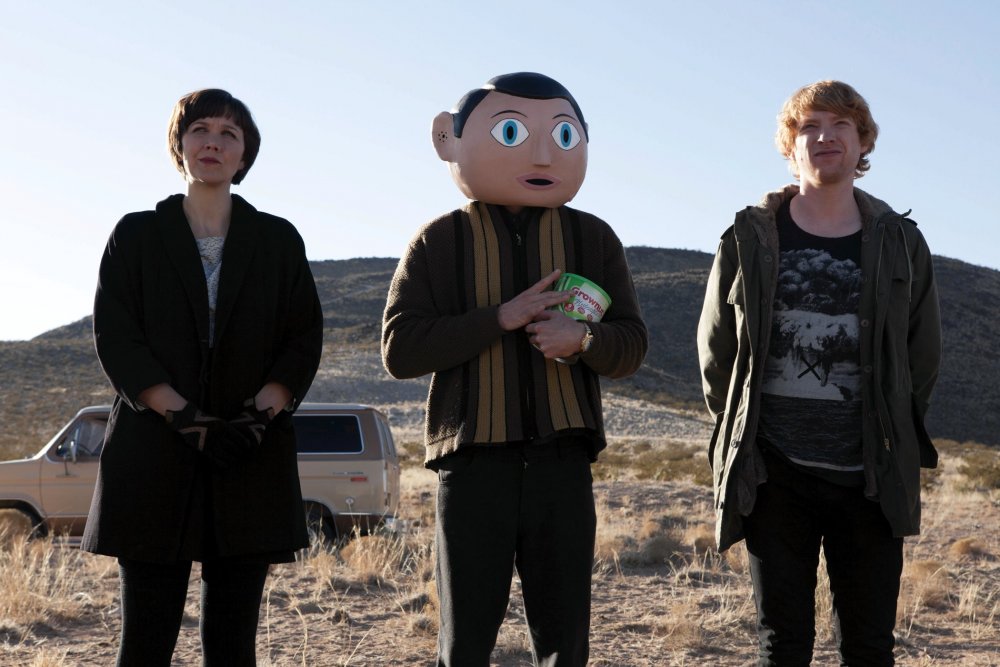 This idea of proxies, substitutes and inauthentic copies runs through the film. Jon is a replacement for the original keyboardist, who tries to drown himself after suffering a breakdown.

The sea always plays a pivotal part in Abrahamson’s work – there were deaths in or beside water in Adam & Paul and Garage, and an important beach scene in What Richard Did – so it’s significant that Frank starts with this near-death by drowning and later features a Norse-style funeral on a lake. Staring out to sea, Jon attempts to compose songs in his head in a series of painfully bad musical doodles to which we alone are privy. This leads to a breakthrough moment when he appears to have hit on a brilliant chord sequence, only for him to realise dejectedly that it is merely ripped off from ‘It Must Be Love’, which he was listening to only moments before. (Interestingly, Jon calls it “Madness’s ‘It Must Be Love’” – another reference to copies, since the original version is by Labi Siffre.)

Duplicates lurk in every corner of the film, beginning with Frank’s artificial head. To anyone who objects that his face is weird, he counters that real ones are just as odd. As if to prove that point, his bandmate and protector/enabler Clara (Maggie Gyllenhaal) has a face that seems even more immobile than Frank’s illustrated one. (Her severely cut black bob also resembles a parody of his ‘hairstyle’.) 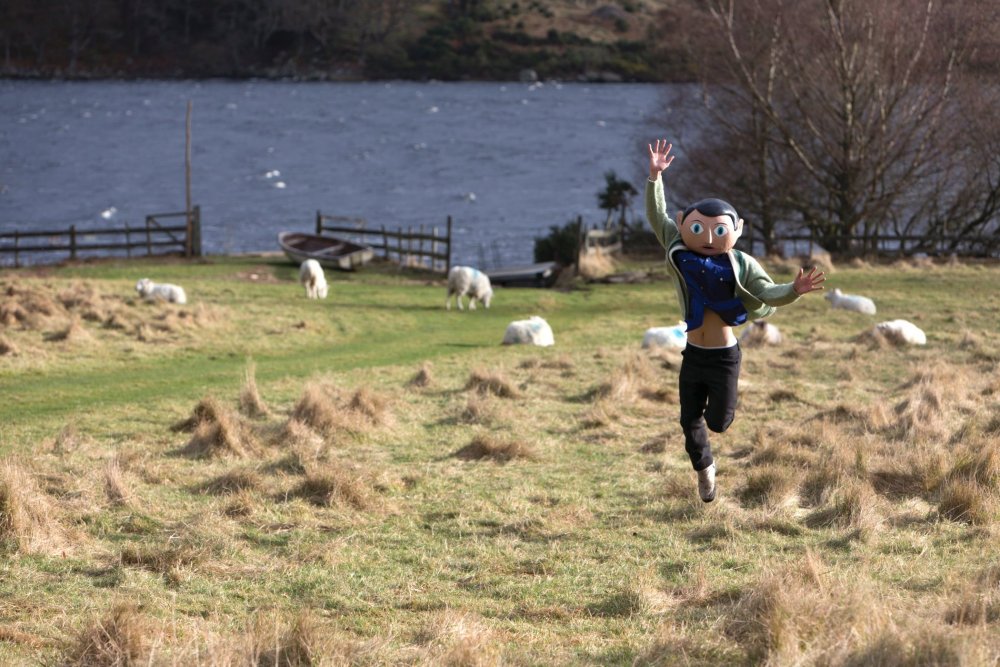 “Would it help if I said my facial expressions out loud?” Frank asks Jon, offering by way of example “Welcoming smile” and “Big, non-threatening grin”. No wonder some members of the entourage have trouble distinguishing between real and bogus, human and artificial – Don, for example, has a penchant for sex with mannequins. Even in death, Don does not escape the curse of the copy: believing themselves to be scattering his ashes in the desert, his friends discover too late that they are instead distributing handfuls of Grownut powder.

This extends to the relationship between reality and pretence within the filmmaking process. Frank is, after all, a kind of deliberate biopic manqué: the Frank Sidebottom story and yet not. But it is also a celebration of uniqueness. Its actors are not only portraying musicians – as with Nashville, all the music we see and hear being performed by the onscreen band is being played by the people on screen.

A more pressing question of authenticity is bound to surround any film in which a major star spends the bulk of his screen time with his face hidden. Given that Frank’s head stays on for all but two scenes, it will be a trusting viewer who doesn’t wonder even for a second whether it’s really Michael Fassbender under there all along. It would be unfair to call the unveiling near the end of the film a failure of nerve, especially since Fassbender gives a finely textured performance both in and out of the head, but it’s hard not to wish that some way had been found to preserve that tension – to keep us tantalised, even suspicious, to the last. 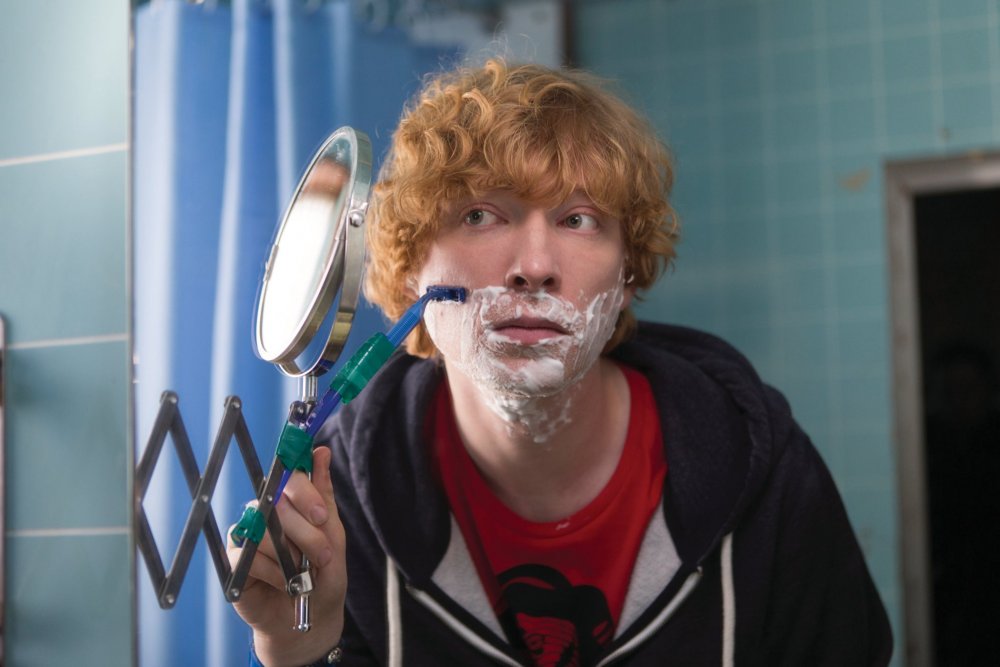 At least Frank has another, more insidious trick up its sleeve, which it is in no hurry to reveal. In the figure of Jon, the film has an obvious stand-in for the audience: he acts as our proxy, our bewildered eyes and ears, as he is drawn deeper into Frank’s oddball world.

The position of main character is a privileged one but it can also be deceptive. Jon is gradually shown to be spectacularly under-talented. That much is made clear when Frank and Clara invite him to play some of the songs he claims to have written. To say that the bucket emerges empty from the well would be an understatement. But as Jon devotes his energy to posting surreptitious footage of the band on YouTube, and boosting his own Twitter following, his interests begin to diverge starkly from those of Frank and The Soronprfbs. Jon is commerce; Frank is art, perhaps even genius. The film is binary in its insistence that the two are unhappy bedfellows.

Jon may be a dope but he is a dangerous one, at least in this context, much like the budding young editor in Lisa Cholodenko’s High Art (1998) who exploits the legendary, washed-up photographer with whom she starts an affair. Not only is Jon devoid of talent or originality, he is an actively negative, compromising influence on Frank. It was brave of Ronson to write his own onscreen surrogate as the villain of the piece, albeit an unacknowledged and inadvertent one. Braver still of the film to argue that the rest of us will never understand what it’s like to be a genius, so we may as well stop trying to prise open the damaged heads of our heroes.