Film of the week: Noah

Come on in, the water’s barmy. Jonathan Romney is stopped by the glittering eye of Darren Aronofsky’s Biblical reboot. 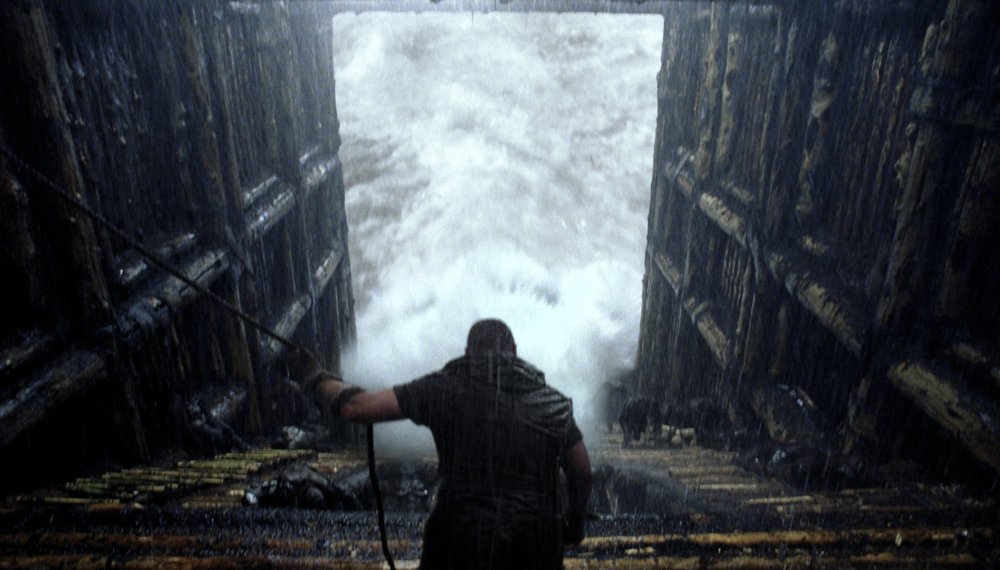 Perhaps the most abused word in cinema today is ‘epic’ – now routinely used to denote any film that spends more a certain amount of its multi-million-dollar budget on CGI. Recent superhero films have tried, with weary repetitiveness, to justify the description by whipping up their spectacle to a certain apocalyptic level, involving the rampant destruction of cities on a level recalling John Martin’s 1850s painting The Great Day of His Wrath – itself the quintessential source image for an earlier school of authentically epic cinema, the Biblical retellings epitomised by Cecil B. DeMille’s The Ten Commandments (1923 and 1956).

Much ridiculed as faux-pious bombast, films such as DeMille’s nevertheless achieved an genuine edge of transcendence precisely by highlighting the very aspects of Hollywood cinema that might otherwise have seemed most mundane, by showing Moses not as an unapproachable patriarch, but as a two-fisted action man who just happened to be wearing robes and sandals – by making him Charlton Heston, in other words. The fact that Darren Aronofsky’s Noah is played by Russell Crowe might initially have caused some anticipatory titters, but actually proves to be one of the approachable and highly effective elements which makes the film work. Crowe’s presence as a muscular, tormented struggler, an antediluvian working stiff, gives Noah a human, even earthbound grounding that allows its considerable strangeness and ambition to take flight; makes it epic in the properly transcendental sense that DeMille would have recognised.

Noah is a film that will mean different things to different viewers: pure CGI blockbuster to some (in no way more serious than last year’s Pacific Rim), risible kitsch to others; and to some, like Variety’s Justin Chang who thoughtfully defended the film as a serious nonconformist engagement with theological issues, a genuine attempt to reinvent Biblical cinema for the age of digital overkill. Watching the film in the cavernous downstairs auditorium at London’s Odeon West End, I felt myself fluctuating between all these responses, at moments barely able to engage with much other than the sheer hugeness of the film – but finally emerging to conclude that yes, despite the considerable quotient of sheer barminess, Noah was something substantial and different. Indeed, you wonder whether a biblical screen spectacle of this kind can be made without some degree of barminess – or divine exaltation, if you prefer. 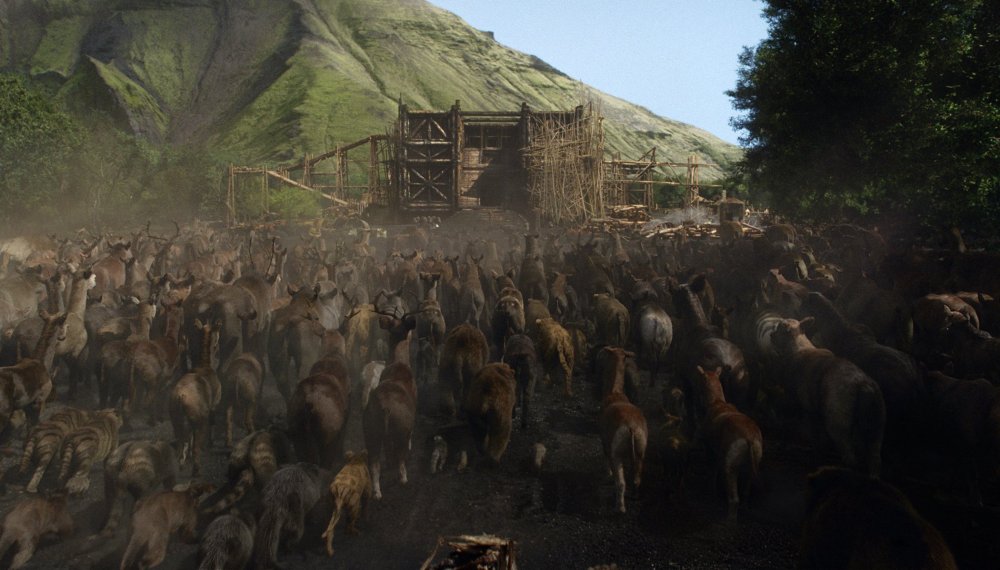 Noah is a dark, nightmarish vision of the Old Testament that finally has few affinities with the reassuring piety of the DeMille school. It aspires to a mode of properly visionary imagination, to which end Aronofsky and co-writer Ari Handel have consulted not just the Old Testament but also such non-canonical sources as the Book of Enoch. Hence much material that makes you scratch your head and think, “Wait a minute – I don’t recall that being in the Bible.”

The film’s most startling element, and the one that risks capsizing Aronofsky’s vessel before it even sets sail, is the race of six-armed stone giants who actually do the work of hauling timber and assembling the Ark; they are fallen rebel angels, creatures made of light who emerge in shambling, Quasimodo-like form after plummeting from the firmament into hot lava. These creatures – ostensibly inspired by the apocryphal race of Nephilim – seem at first more suited to go mano-a-mano with the Incredible Hulk than to lend gravelly gravitas to a film like this (they are voiced by Nick Nolte and Frank Langella). But their presence from the start requires you to make the proverbial leap of faith, and once you’ve accepted them as a part of the myth, then you’ve essentially bought into the spirit of the film.

Similar is the opening exposition that establishes Noah as a descendant of the peaceful farming tribe of Seth (Cain and Abel’s less celebrated brother), eternally menaced by the warrior race descended from Cain, and headed here by Tubal-Cain – a roaring, fork-bearded Ray Winstone, playing the tyrant as the ultimate neighbourhood bully.

I use the word ‘myth’ advisedly, because the film presents itself not as the retelling of a familiar Bible story, but as the presentation of a creation myth that has Biblical resonance but that isn’t limited in its meaning to simply expounding what we think we know about the Ark story. Noah seems determined to lift its narrative story up off the level of the flatness and familiarity of the scriptural page, and to restore to the act of Biblical storytelling the dimension of visionary exaltation, of hallucinatory vastness. 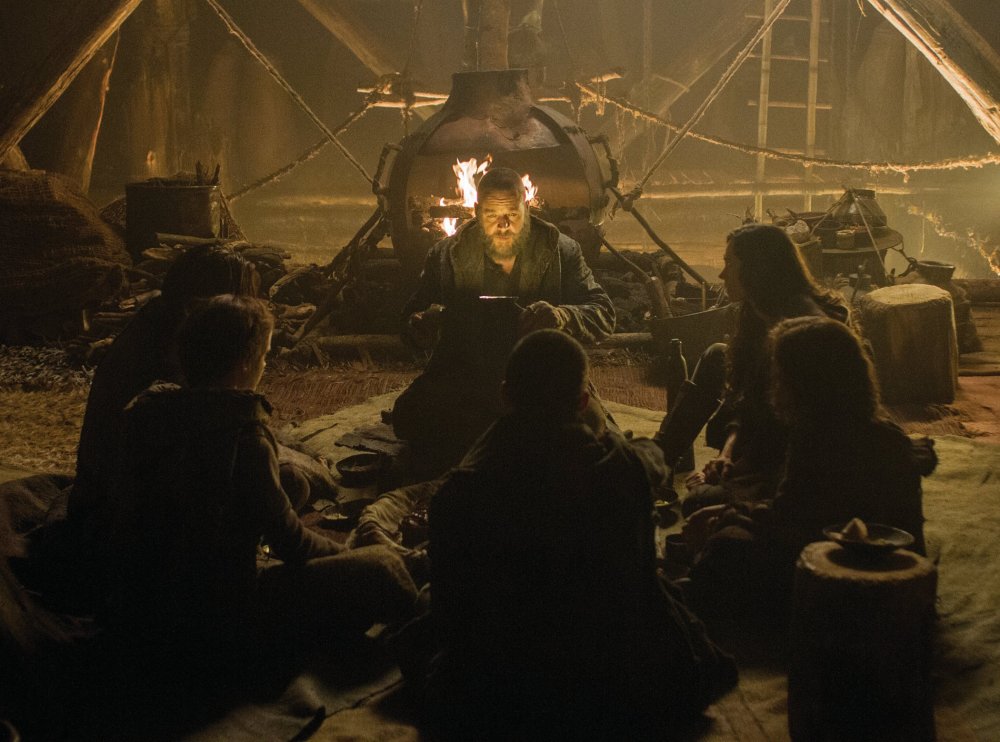 It’s no doubt to this end that Aronofsky strips his film of familiar Bible-epic iconography (no sandals and sand dunes here) and sets his film in a world that’s more like a parallel universe than a recognisable pre-Babel Middle East: characters dress like medieval warriors or post-apocalypse survivalists, and at one point we see cities that seem to belong to a technological sci-fi future. Similarly, when we meet Noah’s grandfather Methusaleh (Anthony Hopkins), he’s not just a bearded old man living in a cave, but the patriarch of patriarchs enthroned in the very bowels of the earth, a chthonic elder in his own massive underground Fortress of Solitude (it’s sometimes very hard to describe this film without recourse to the language of the new superhero cinema).

The sense that the film is spinning a new creation myth, or reclaiming an old one from the staleness of overuse, is instilled in the first few shots, in which the film seems really to be starting small – with the close-up of a serpent slithering right at the camera. The film spins its creation myth by repeating a few single images, in close-up – this snake, a fist raising a weapon to the sky, the Fruit of Knowledge resembling a sentient pomegranate on a branch – and repeats these, at one point as a nightmare of Noah’s, until the elements take their place in an overall myth, a big picture that then gets bigger, and bigger still.

Out of the slender material of the original Noah story, Aronofsky and Handel weave a complex and often fanciful saga that involves, among other things, Tubal-Cain’s malign presence on the Ark as stowaway, his recruitment of Noah’s embittered son Ham (Logan Lerman) as his inside man, and a multitude of animals who obligingly turn up on cue, then peacefully allow themselves to be lulled to sleep for the duration of the Ark’s voyage thanks to sleep-inducing incense (rather like the drugged airline passengers in Almodóvar’s I’m So Excited). If this isn’t a radical flouting of expectations, then nothing is – a Noah story largely without animals, not a curiously craning giraffe’s neck in sight (and the Ark itself, in Mark Friedberg’s production design, is not the usual boat but a huge wooden hulk like a rudderless industrial sea container). 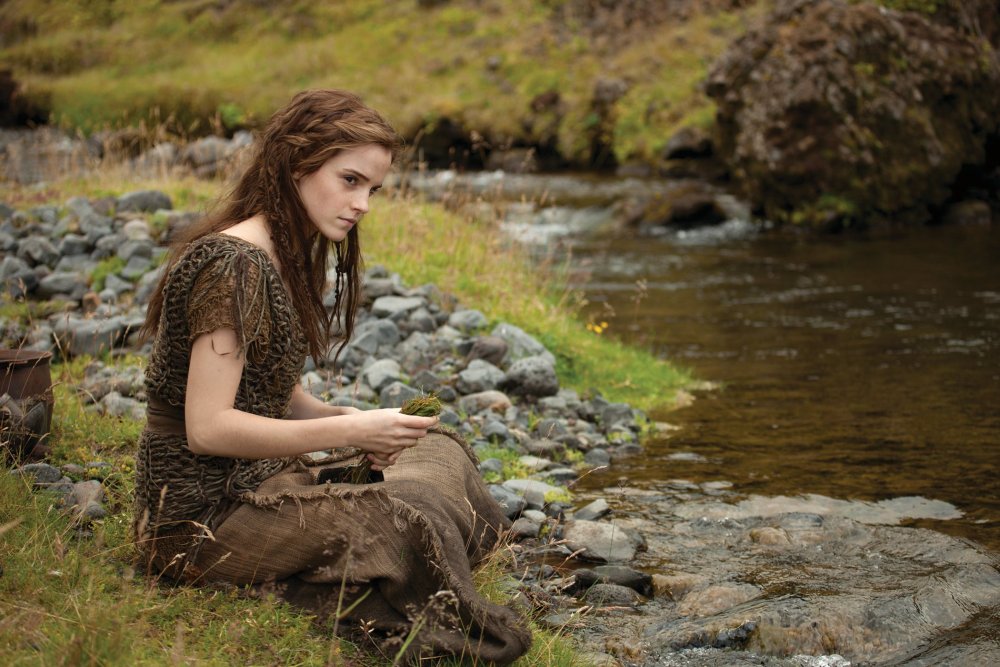 The most intriguing role is that of Emma Watson’s Ila, a woman fated, as partner to Noah’s son Shem, to repopulate the earth, but whose destiny is at odds with her awareness that she is apparently barren (as signified by a stigma-like scar on her belly). Thanks to miraculous intervention, she will eventually bear twin children, and here’s where the radical strangeness of the film’s vision kicks in: Noah sees it as part of his God-given mission to slaughter those children, to stop humanity rising again and destroying the earth. Apart from a clever displacement of the Abraham story, this makes Noah a more complex, troubled and troubling figure than the simple agent of heroic deliverance we might expect him to be: his success in achieving his mission is perceived by him as catastrophic failure. In fact, it’s the film’s villain, the warlike brute Tubal-Cain, who argues for humanity’s survival against an extremist willing to destroy his own family and indeed species for the future of the planet (Noah as a Gaian fundamentalist).

What distinguishes Noah as visionary spectacle is its absolute earnestness. Aronofsky is a director who has never shown much sign of humour in the past, his absolute lack of mischief (and inability to discern the very possibility of its presence in his own work) has led to certain moments of farcical overstatement in his films, notably when Natalie Portman blossomed, in mid-dance, into the fabled ‘Black Swan’ (but looked to most of us as if she was morphing into Daffy Duck).

Such ponderousness has hamstrung Aronofsky in the past – notably The Fountain, where you simply found yourself wondering at his assumption that we would take everything on its own terms without having to be seduced into accepting the cosmic scope of the conceit. But in Noah, the unconditional matter-of-factness of the proposition that Aronofsky presents us with is its own most powerful motor: the film retells a familiar story in its own, largely unfamiliar terms, and takes the wager that we will accept it without argument, without the need for persuasion.

In this, the film replicates the declarative authority of scripture. Aronofsky’s wager doesn’t pay off, not in an obvious or immediate way: some will buy Noah’s monumental nightmare vision absolutely, others reject it as the loopiest kind of Hollywood excess, and then there will be those intrigued sceptics (not least among my own godless tribe of film critics) who will be willing to class it under the category ‘Flawed Magnificence’.

But what’s finally impressive about Noah, even to those of us who are hardly unconditional Aronofskians, is the degree of unbending faith on which this massively ambitious venture is built. Aronofsky and his Noah share the same wild-eyed belief that it takes to build an Ark, or make a movie (or, in some movies, to install a baseball field in the middle of nowhere): the credo that if you build it, they will come.