The explosive genius of Rainer Werner Fassbinder: eight thematic takes on the German wunderkind who contained multitudes, plus an interview and a look at a newly restored TV miniseries.

Plus Lady Macbeth, Raw and cannibalism on film, Raoul Peck’s James Baldwin – and an extended survey of the role of women in British wartime cinema. 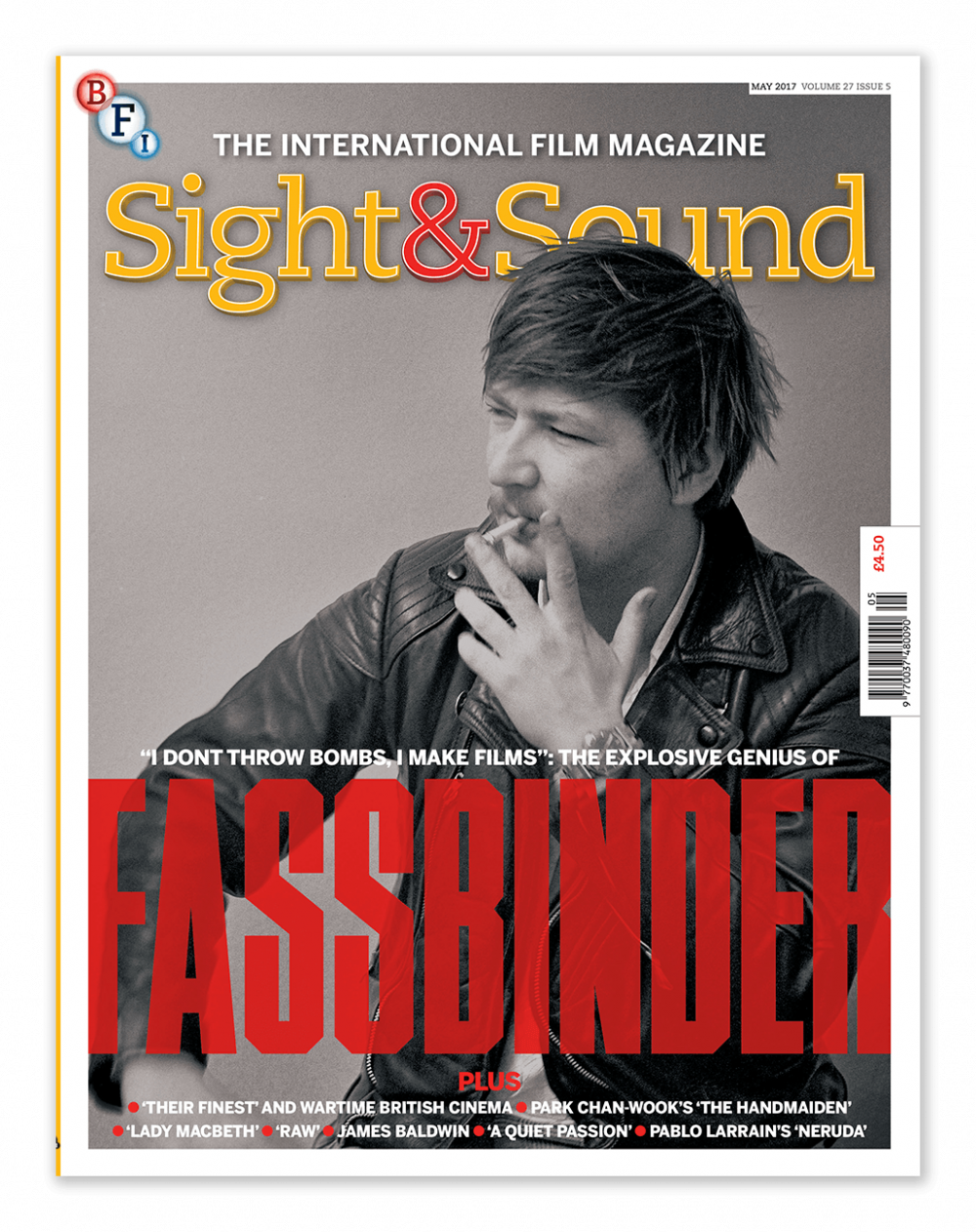 How to encapsulate a talent as prolific and mercurial as Rainer Werner Fassbinder’s? As the BFI mounts a major two-month retrospective – and his previously unsubtitled 1972 TV miniseries Eight Hours Don’t Make a Day comes to Blu-ray – we invited nine critical admirers to frame his “radically naive” yet unsparingly brutal (and highly timely) art across multiple takes: his empathy with outsiders, his mordant philosophy of human nature, his behind-the-scenes provocations, his deployment of diva figures and his aesthetic bravado.

We also revisit a 1974 S&S interview with Fassbinder, in which he talks to Tony Rayns about working across theatre and TV, his thinking about style, the influence of American cinema and his love of Douglas Sirk. And Nick Pinkerton brings fresh eyes to the newly restored ‘working-class series’ Eight Hours Don’t Make a Day.

Also in this issue: Their Finest producer Stephen Woolley shares his multi-year research into the stories of the women who galvanised British cinema during World War II (and afterwards) – and Lone Scherfig talks to Isabel Stevens about paying tribute to the cinematic artistry and the porto-feminism of an earlier era.

Julia Ducournau’s allegorical horror Raw has already been a hit on the festival circuit and on its French release. She talks to Virginie Sélavy about blood, girls, animals and doctors, while Kim Newman binges on the history of cinematic cannibalism across horror, bad-taste comedies and the avant-garde.

Another palpable hit is William Oldroyd’s feature debut Lady Macbeth, adapted by Alice Birch from Nikolai Leskov’s 1865 novella Lady Macbeth of the Mtensk District, with its gothically defiant heroine relocated to the rugged moors of Victorian northern England. Kelli Weston talks to Oldroyd about a movie that takes inspiration from Henrik Ibsen, and broaches not only sex but race and class.

The poor, black, queer writer James Baldwin was “intersectional before that was a thing,” writes Thomas Chatterton Williams – and in the 30 years since his death his reputation has soared. Well timed to affirm Baldwin’s status as the patron saint of a generation of #BlackLivesMatter artists and activists comes Raoul Peck’s documentary I Am Not Your Negro – but does the film do justice to his complexities and contradictions? 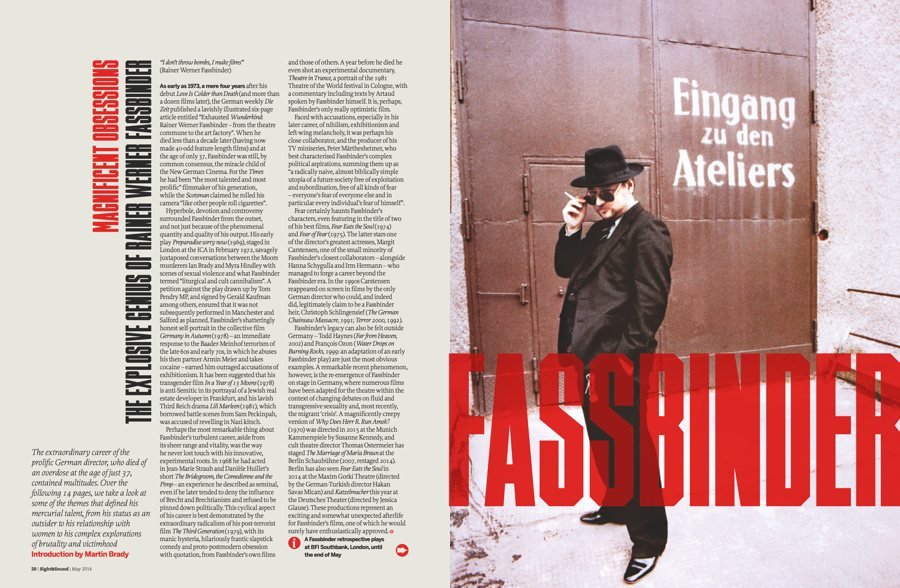 The extraordinary career of the prolific German director Rainer Werner Fassbinder, who died of an overdose at the age of just 37, contained multitudes. Over 14 pages, we take a look at some of the themes that defined his mercurial talent:

+ “The primary need is to satisfy the audience”

In this edited version of a 1974 S&S interview, Fassbinder discusses his early explorations of the everyday realities of German lives and how American cinema influenced his work. By Tony Rayns.

+ “It was supposed to be more pessimistic”

The restoration of Fassbinder’s 1972 TV miniseries Eight Hours Don’t Make a Day allows a new generation to enjoy a classic that ranks with the director’s finest work. By Nick Pinkerton. 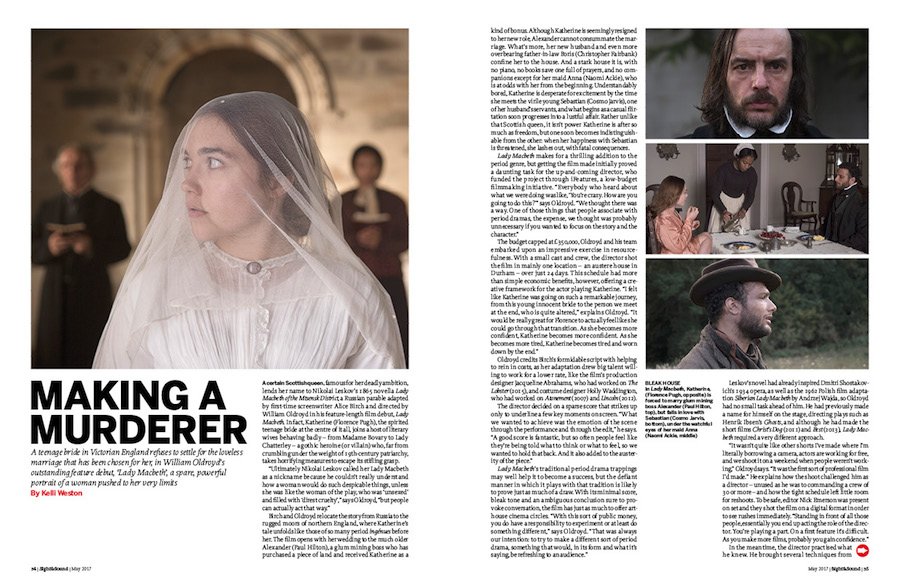 A teenage bride in Victorian England refuses to settle for the loveless marriage that has been chosen for her, in William Oldroyd’s outstanding feature debut Lady Macbeth, a spare, powerful portrait of a woman pushed to her very limits. By Kelli Weston. 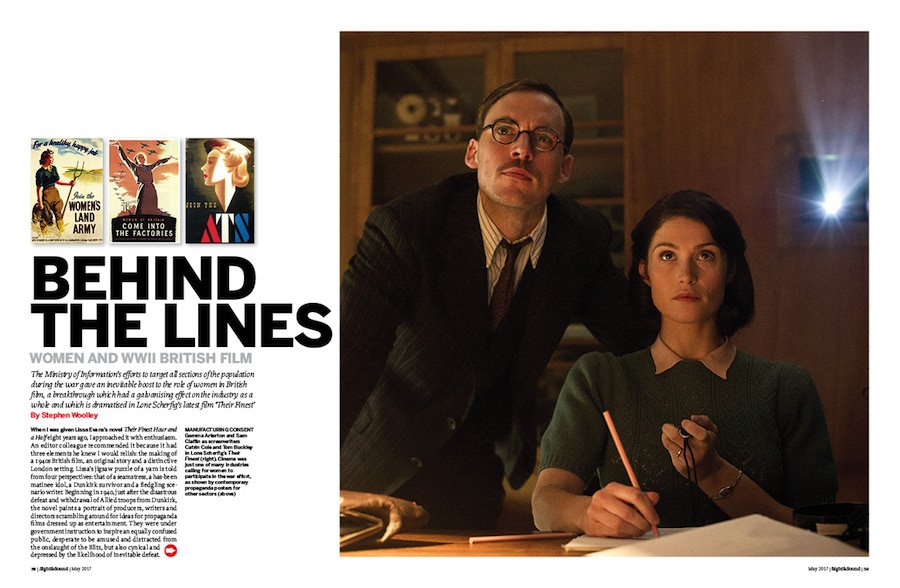 Behind the Lines: Women and WWII British Film

The Ministry of Information’s efforts to target all sections of the population during the war gave an inevitable boost to the role of women in British film, a breakthrough which had a galvanising effect on the industry as a whole – and is dramatised in Lone Scherfig’s latest film The Finest. By Stephen Woolley.

Their Finest director Lone Scherfig outlines the challenges of mixing fiction, archive, Technicolor and black-and-white in a movie that delights in the technical artistry of WWII-era films. By Isabel Stevens. 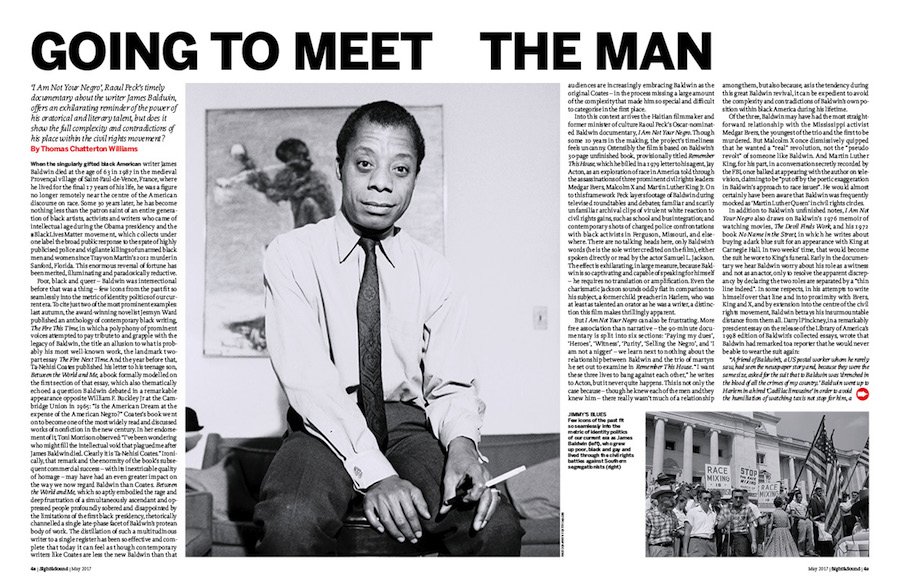 Going to Meet the Man

I Am Not Your Negro, Raoul Peck’s timely documentary about the writer James Baldwin, offers an exhilarating reminder of the power of his oratorical and literary talents, but does it show the full complexity and contradictions of his place within the civil rights movement? By Thomas Chatterton Williams. 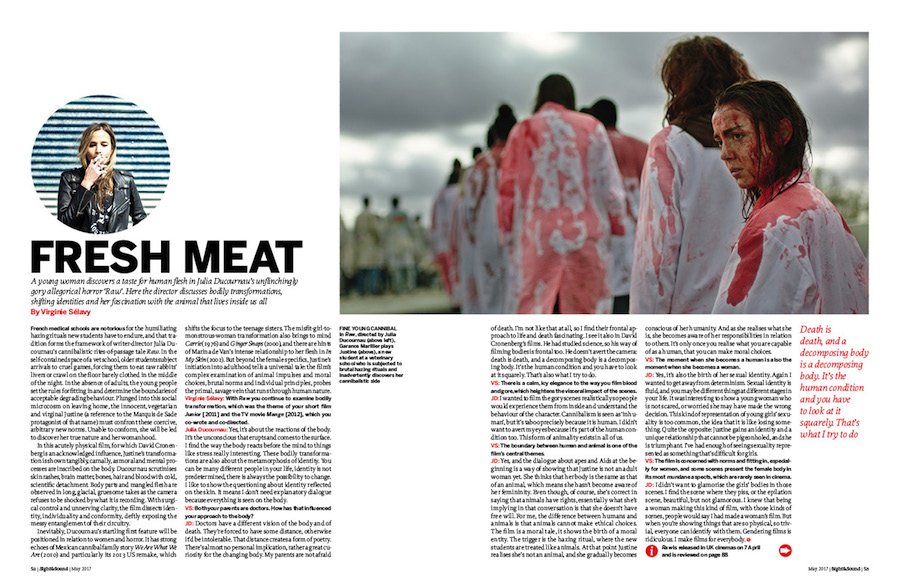 A young woman discovers a taste for human flesh in Julia Ducournau’s unflinchingly gory allegorical horror Raw. Here the director discusses bodily transformations, shiting identities and her fascination with the animal that lives inside us all. Virginie Sélavy.

+ Pleasures of the flesh

As Raw shows, cannibalism can be a potent ingredient in horror films, but its absurd, blackly humorous aspects have also found a home in bad-taste comedies and avant-garde cinema. By Kim Newman.

The world is not enough 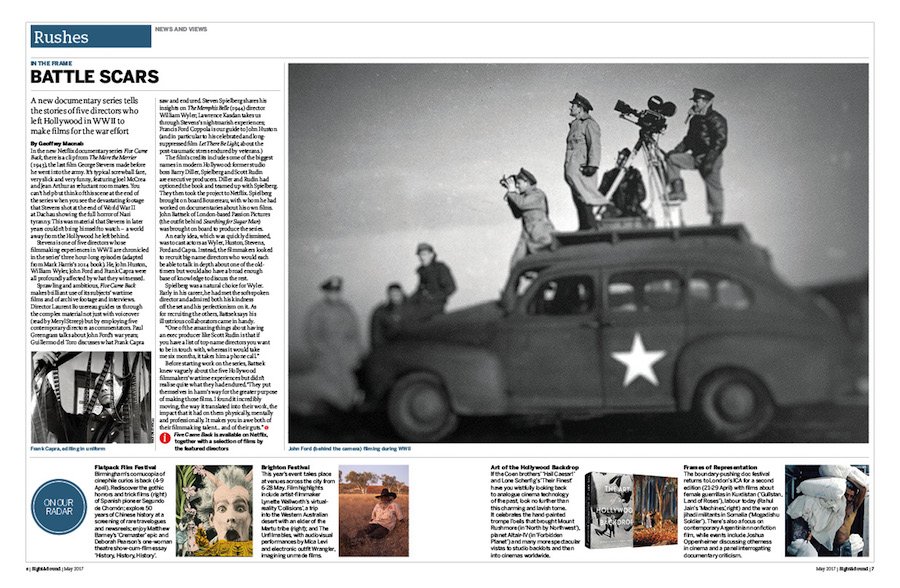 In the frame: Battle scars

A new documentary series, Five Came Back, tells the stories of five directors who left Hollywood in WWII to make films for the war effort. By Geoffrey Macnab.

Interview: The heart of the matter

Katell Quillévéré’s Heal the Living is a moving account of the multiple human dramas involved in a heart transplant. By Kieron Corless.

Object lesson: All tied up

It can show you’re in charge, or a member of the club, or it can be a shackle, a leash or a noose: a tie can be hard to pin down. By Hannah McGill.

In Terence Davies’s A Quiet Passion, Cynthia Nixon turns her back on sex and the city to portray the poet Emily Dickenson. By Pamela Hutchinson.

What accounts for the frenetic output of the likes of Fassbinder and Mizoguchi, against the glacial pace of directors like Tarkovsky? By Mark Cousins.

The eye-popping genre movies the prolific director made in the mid-60s remain phenomenal by any measure in world cinema. By Tony Rayns. 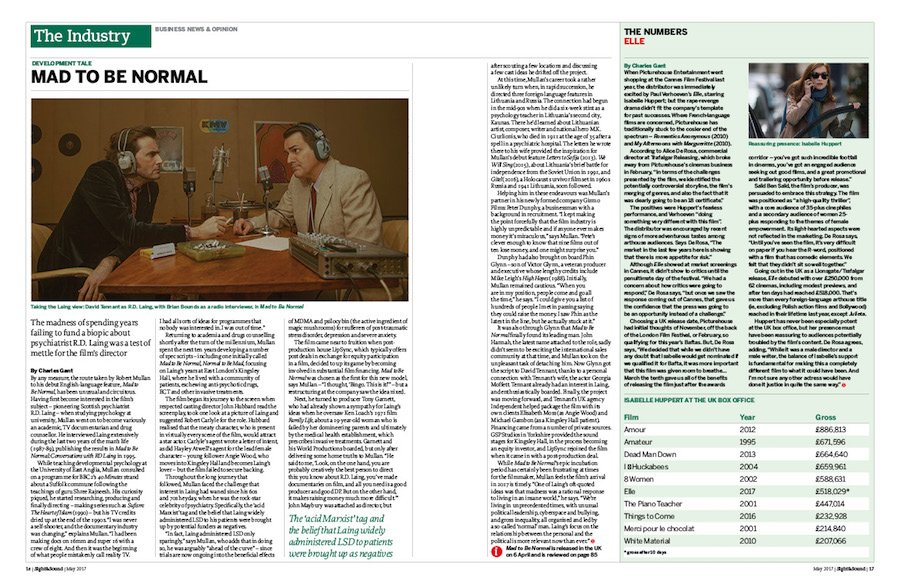 Development tale: Mad to Be Normal

The madness of spending years failing to fund a biopic about psychiatrist R.D. Laing was a test of mettle for Robert Mullan, director of Mad to Be Normal. By Charles Gant.

The success of Paul Verhoeven’s Elle. By Charles Gant.

If subtitles are such a turn-off, why is Walter Presents, a digital platform devoted to foreign-language telly, proving such a hit? By Geoffey Macnab. 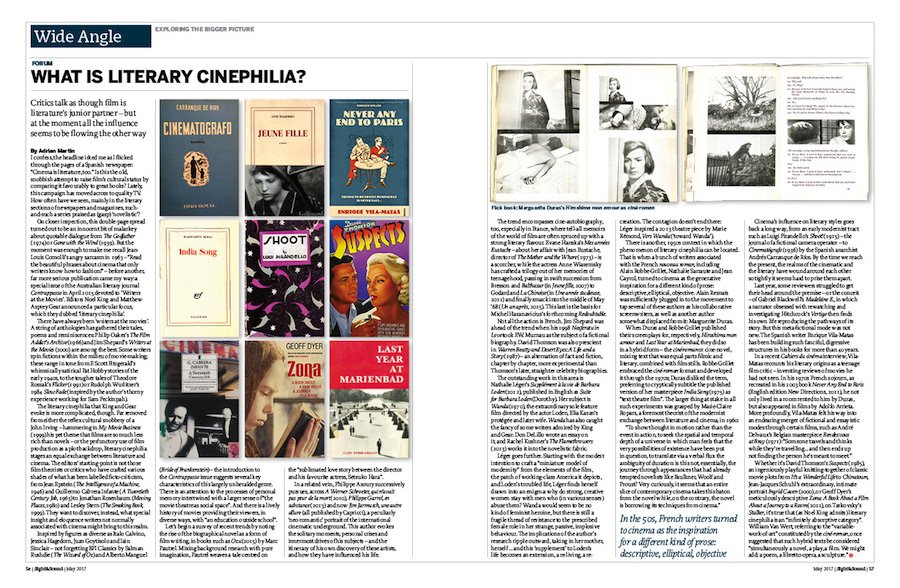 Forum: What is literary cinephilia?

Critics talk as though film is literature’s junior partner — but at the moment all the influence seems to be flowing the other way. By Adrian Martin.

A talk by the remarkable filmmaker Ju Anqi is just one of the diverse highlights of London’s Chinese Visual Festival. By Tony Rayns. 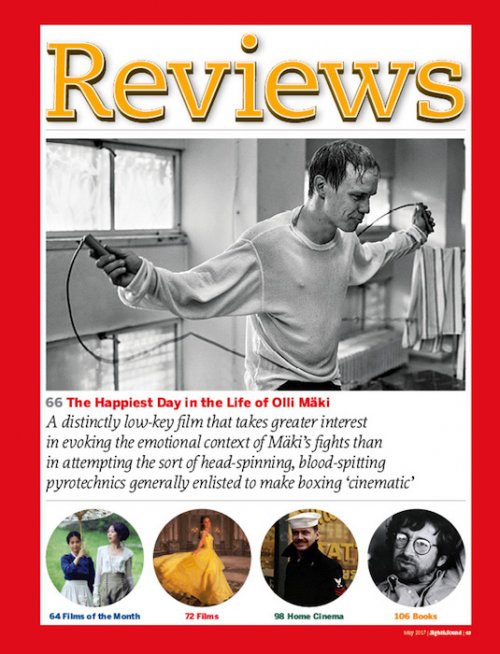 Aftermath
Beauty and the Beast
The Belko Experiment
Bunch of Kunst
Chosen
Citizen Jane: Battle for the City
City of Tiny Lights
Clash
A Dark Song
Gleason
The Hatton Garden Job
Heal the Living
I Am Not Your Negro
Kong: Skull Island
Lady Macbeth
Letters from Baghdad
Mad to Be Normal
A Moving Image
The Nights of Zayandeh-Rood
The Promise
Rangoon
Raw
The Sense of an Ending
Smurfs: The Lost Village
Suntan
Table 19
Tanna
Their Finest
The Time of Their Lives
The Transfiguration
The Void
Who’s Gonna Love Me Now?
Wolves at the Door
Zip & Zap and the Marble Gang 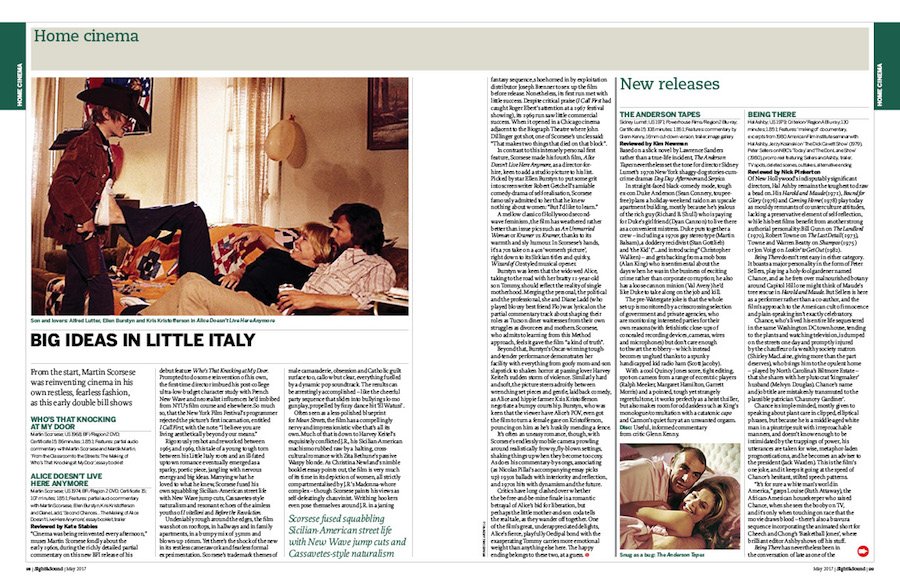 From the start, Martin Scorsese was reinventing cinema in his own restless, fearless fashion, as this early double bill shows. By Kate Stables.

The Anderson Tapes
Being There
The Boy Friend
Chilly Scenes of Winter
The Creeping Garden
Deluge
The Last Detail
The Life of Oharu
My Twentieth Century
Police
S.O.B.
Story of Sin
Strange Cargo
Two Rode Together 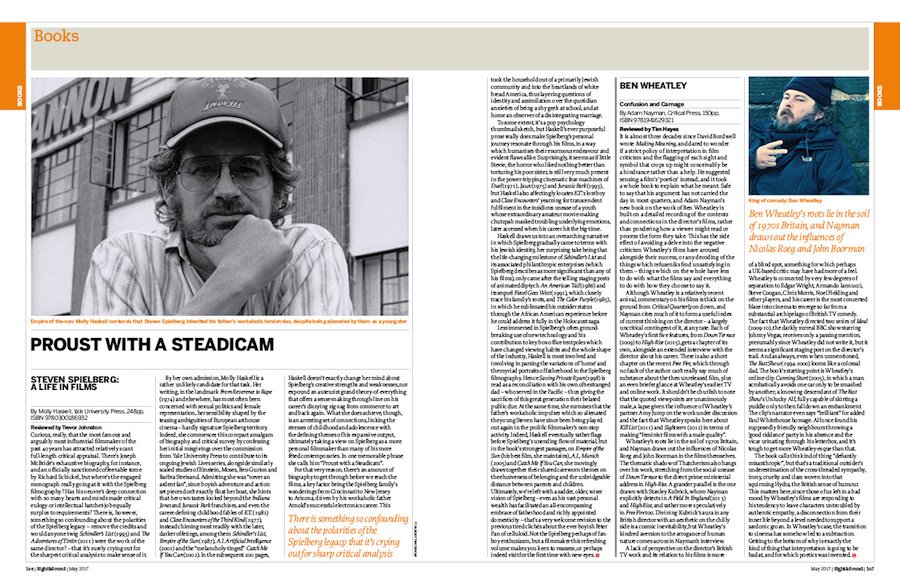 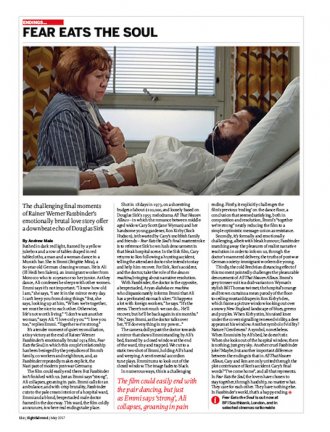 Behind the Curtain I

Behind the Curtain II

On the Daughter Front