This adaptation of Sarah Waters’ Fingersmith from the South Korean director of Oldboy cocoons a tale of illicit lesbian passion in an intricate, mutable narrative that’s as labyrinthine as its gothic mansion setting. 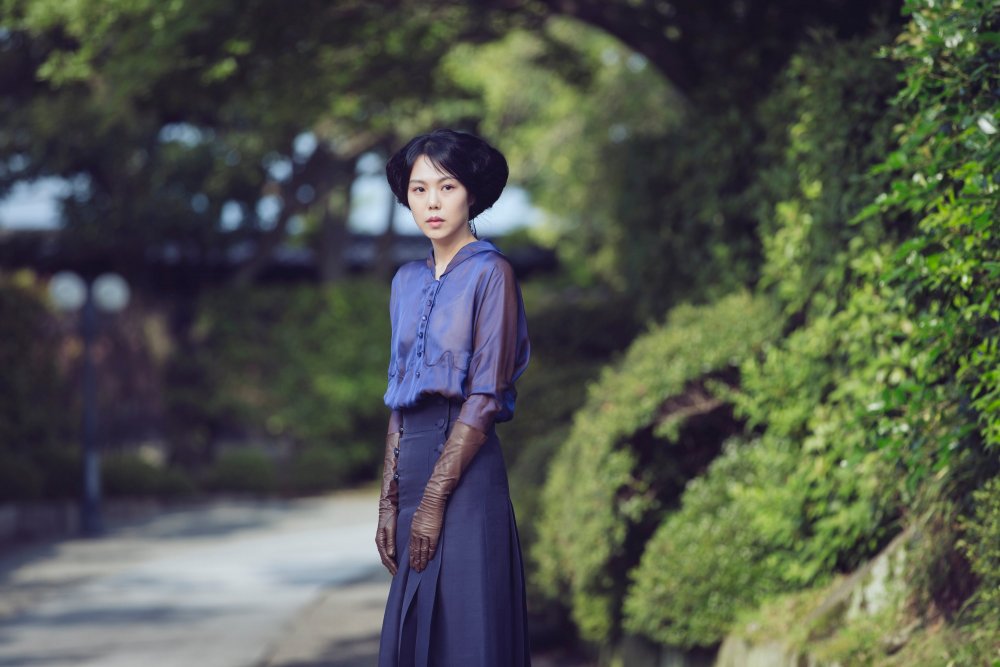 Spoiler alert: this review hints at a plot twist

Park Chan-wook’s last film, the US-made Stoker (2013), seemed at the time like a blind alley for the South Korean king of the baroque thriller, an uncharacteristically demure step away from the Artaudian extremity of his so-called revenge trilogy (Sympathy for Mr Vengeance, 2002; Oldboy, 2003; Lady Vengeance, 2005). Promoting Stoker, Park quoted Ang Lee’s comment that “in Asia and Europe the director is king and in the United States he’s president” – in other words, he must win producers’ approval rather than being free to implement decisions spontaneously.

In The Handmaiden, however, Park visibly rules his cinematic kingdom with imperial autonomy, cooking up a hyper-elaborate plot (based, in slightly simplified terms, on Sarah Waters’s 2002 neo-Victorian novel Fingersmith) and mounting it on spectacular sets, designed by Ryu Seong-hee, of extraordinary beauty and intricacy. The sprawling, oppressive dwelling of wicked uncle Kouzuki is a Wellesian Xanadu, and creating it on screen in all its palatial complexity is in itself a statement of triumphantly unrestrained auteurial power. The exteriors are magnificent, too, both in the labyrinthine depths of Kouzuki’s garden – at one point, his niece and intended bride Hideko is glimpsed through dense thickets of branches – and in DP Chung Chung-hoon’s ’Scope vistas of exaggeratedly green rolling landscapes.

But the house is also a metaphor for the narrative’s constantly shifting construction of surface appearances and shock reveals, in which the criminals prove to be the dupes and the seemingly gauche victim is the canniest manipulator of all. Handmaiden Tamako has been sent by the Japanese ‘Count’ Fujiwara to prepare his seduction of Hideko, whose fortune he intends to steal, but her work as an undercover agent is far outdone by Hideko herself, who reveals layer after layer of duplicity from the moment we discover that her neurotic ingénue persona is in fact an elaborate performance. All this is cleverly developed in the film’s arrangement in chapters, with section two repeating scenes from section one, with entirely different inflexions. 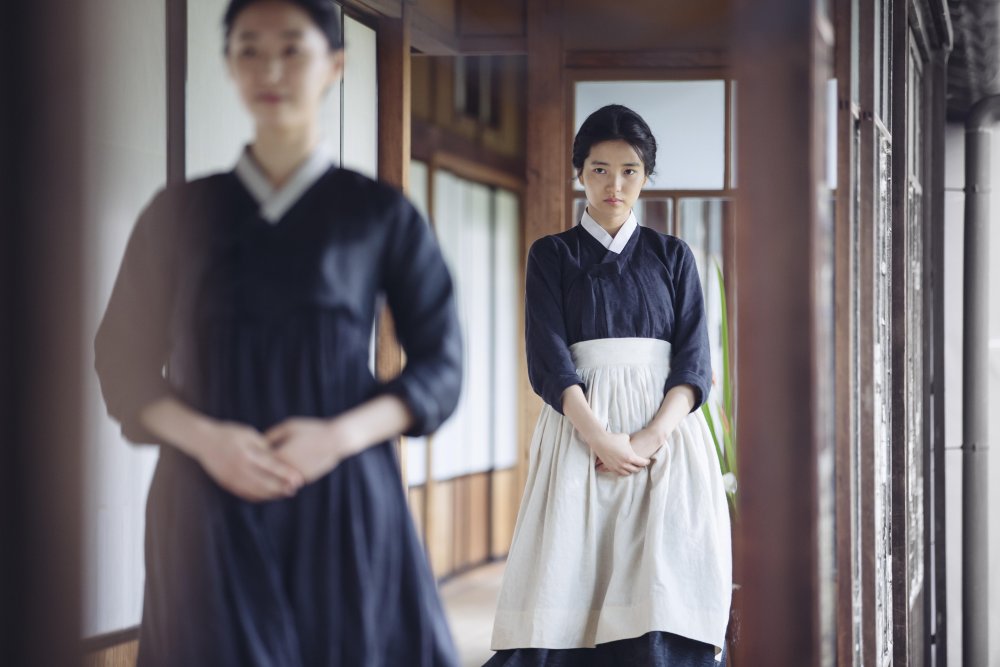 By the same token, Kouzuki’s house constantly reveals new wings and corridors. Its design combines English Victoriana with Korean and Japanese elements (Korean himself, Kouzuki despises what he sees as Korean ugliness, while fetishising the aesthetics of the occupying Japanese culture). The pastiche-laden design also alludes to Hollywood gothic, to the shadow-steeped manorial piles of films such as The Spiral Staircase or Rebecca (the film even has its own Mrs Danvers, in the shape of Kouzuki’s forbidding housekeeper Sasaki). The layers of the narrative, constantly elaborating on and correcting each other, are duplicated in the sliding screen doors of the house’s Japanese wing. This is altogether a palace of the cinematic imagination, transcending the realism of space and time, and concealing a further sinister level in its cellar – the realm of modern nightmare horror, where a classically Parkian act of revenge-fuelled cruelty takes place, with a massive octopus (an echo of the iconic shock image of Oldboy) squirming in the background.

The Handmaiden’s play on innocence and evil is profoundly textual, not least when it comes to the grand guignol ending (to which there’s a rather Greenaway-esque flavour, from the recititation of a list of arcane Japanese pornographic texts to the aberrant use of bookmaking tools). The literary eroticism is underpinned by allusions to the Marquis de Sade’s novel about a female libertine, Juliette – recited here by proxy, it seems, in an Asian pastiche version – which inescapably implies the presence of Juliette’s virtuous counterpart, eternal victim Justine. At different points in this hall-of-mirrors narrative, the ostensibly wicked Tamako and the supposedly virginal Hideko occupy both positions – taking ‘positions’ to mean narrative functions as well as sexual postures. The latter meaning comes to mind in the repeated image of Hideko surprised in the woods with Fujiwara: witnessed both times by Tamako, Hideko’s position straddling the fake count has two entirely different significations depending on whether we understand her to be accidentally glimpsed by her handmaiden or whether the scene is laid on expressly for the gullible Tamako to stumble on.

Hideko is also seen performing a grotesque airborne sexual ballet with a wooden puppet for her uncle and his friends: a truly Sadeian image that, for western viewers, may carry resonances of Hans Bellmer’s sexualised doll figures. But it also foregrounds the theme of puppetry that runs throughout, with Hideko, Tamako and Fujiwara at different points manipulating each other, while director Park pulls the strings of all of them – and of the audience.

The overall shape of The Handmaiden is something like a narratological equivalent to the ‘folding of Paris’ sequence in Christopher Nolan’s Inception (2010), with every character not only mirroring several others but also having multiple incarnations that interlock, in a form of narrative tessellation. This is also a film, not unlike Inception, in which the viewer is required to follow symbolically laden objects, their roles no less important than those of the characters: notably, a butterfly hairpin that performs different functions throughout, and a set of metal balls that begin as instruments of punishment and end as toys for mutual female fulfilment. Arguably, the two heroines themselves become fixed as objects at the end of the film, at the very moment when they seem to achieve their full erotic fusion and liberation from male domination: framed together in a perfectly symmetrical embrace, they become above all a mirror image, an emblem of female resemblance rather than two autonomous beings.

In the film’s object-based doll’s-house construction, it might be hard to imagine human actors having a great deal of agency, yet remarkably they do, with Ha Jung-woo’s duplicitous Fujiwara channelling the manipulative cads of English melodrama, while Kim Tae-ri touchingly reveals new emotional reserves, as Tamako shifts from hard-nosed adventurer to born-again innocent, discovering a new self through her ordeal. Most mesmerising, however, is the mercurial Kim Min-hee, putting her Hideko through multiple changes, from trembling neurasthenic gamine to sexually manipulative vamp – and all in a selection of designer Cho Sang-kyung’s extremely elaborate costumes, ranging from quasi-geisha to Victorian-style heroine in anachronistic wedding-cake frocks and vast hats. Anyone who has seen Kim as the decidedly modern Korean woman of recent Hong Sang-soo films (Right Now, Wrong Then, On the Beach at Night Alone) may be surprised – but perhaps not that surprised, given how protean Hong Sang-soo requires her to be in even such relatively stable roles.