Agata Pyzik explores the life’s work of a versatile provocateur who straddled art and exploitation. 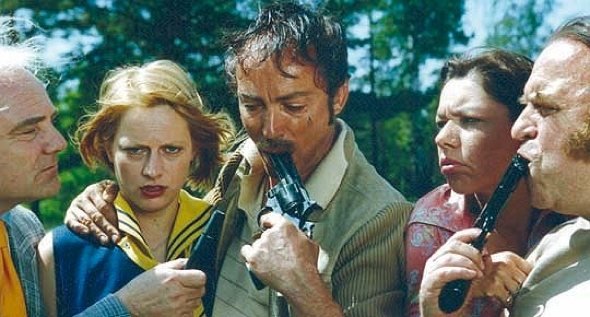 There’s an early short film by a ten-year-old Christoph Schlingensief in which he’s playing a teacher dressed in a little suit in the countryside, lording it over a group of children more or less his age. He tells them to do various absurd things – sit down and stand up repeatedly, walk into the road and hold flags in a mock demonstration – while he offers a surrealist commentary off-screen. Already, it seems, he was aware of the political complexities of the country he lived in, where the memory of Nazism was repressed and West Germans were told to keep consuming and keep quiet.

The late (1960-2010) film and theatre director, visual artist, TV personality and professional scandalist (website) was curiously never shown or recognised in Britain during his lifetime, despite being well known in European art circles. His recent, selective retrospective at Tate Modern and ‘Opera Village’, an exhibition showing in the German Embassy in London, both offered a rare chance to discover a highly idiosyncratic artist whose main concern was to disrupt European complacency about the post-war order.

Bane of the bourgeoise

With some relish, Schlingensief took on hypocrisy, racism, xenophobia, greed, materialism, petty bourgeois mores and especially the aggressive, expansionist past of his country, which would gladly have forgotten it was ever responsible for the Holocaust. He delighted in media innovations such as reality shows and surveillance footage, using them critically to create a Brechtian alienation effect in his audiences. Many in Germany and elsewhere knew him only as the guy with the megaphone from his televised events and talk shows, in which he fiercely criticised the state’s xenophobic politics and amnesia about the past. 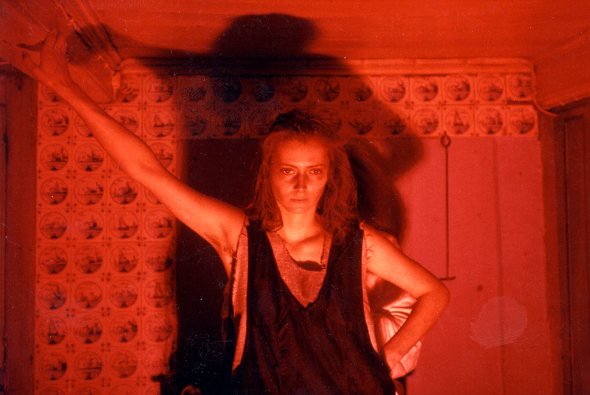 Inspired by Godard and the New German Cinema – he regularly worked with Fassbinder’s actors such as Irm Hermann – Schlingensief in the end rejected the doctrine of good taste; he was, for example, a lifelong detractor of Wim Wenders’ polished and instantly recognisable ‘artistic’ films. Instead he decided to make intelligent and politically acute films with his own very personal trash aesthetic.

At the same time he borrowed aspects from the conceptual artist Joseph Beuys and his idea of ‘social sculpture’, which considers art as secondary to the potential change the artwork or artist can foster among the public. Schlingensief was obsessed by the unhealed traumas of German 20th-century history and the attempts to obliterate them. When in the 1980s many on the Right in Germany were trying to relativise Nazi atrocities by comparing them with other war crimes, Schlingensief made a series of horrifying films that cut to the heart of the strange relationship contemporary Germany has to its past.

The horror, the horror

In the particularly flamboyant and baroque Egomania (1986), Schlingensief’s then-lover Tilda Swinton and fetish actor Udo Kier go crazy in grim, post-apocalyptic landscapes. Schlingensief points to Freudian family relationships within the German bourgeoisie as the seed from which the horror is created. In Menu Total (aka Meat, Your Parents (Piece to Piece), 1985/86), shot in dark black and green – a film Wenders famously walked out of after 10 minutes at the Berlinale – a deranged boy, haunted by monstrous fantasies and molested by his father, finally kills his parents in a horrible manner. 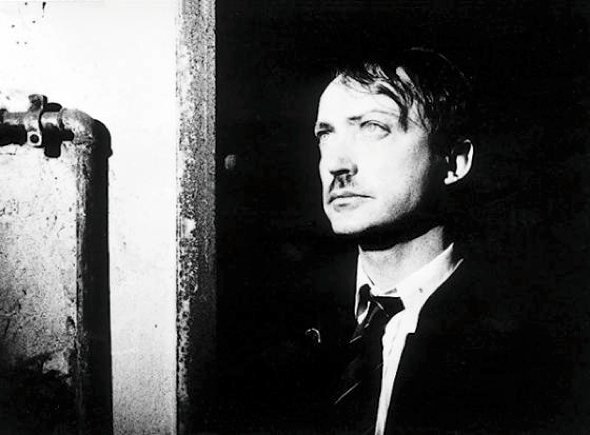 The first part of his German Trilogy, 100 Years Adolf Hitler (1988), about the last hours inside Hitler’s bunker, was shot in complete darkness during a 16-hour binge with his usual team of actors (including Kier and Fassbinder collaborator Margit Carstensen) sleepwalking until they start to act like monsters – pitiful, lunatic, perverse – spurred on by exhaustion and the horror and dread of who they are and what they have done. We see the real cost of the years of National Socialism from which Germany still hadn’t recovered; repeated references to the Baader-Meinhof gang in the trilogy suggest there are yet more crimes to answer for.

After Jörg Haider’s Freedom Party of Austria was included in the government coalition in 2000, Schlingensief went to Vienna and constructed a container next to the opera house in which he conducted a refugee Big Brother called ‘Foreigners Out!’ (2002), asking Austrians to vote for their least favourite refugee. It caused outrage in Austria, with the crowd staying in the square day and night, and resulted in people trying to dismantle the container and issuing death threats to the director. It remains one of the most interesting examples of the recently popular ‘art of participation’ (practiced by artists such as Jeremy Deller, Pawel Althamer and Artur Zmijewski), possessing a level of distastefulness and political sharpness that forced Austrians to confront their own intolerance.

Schlingensief existed on the fringes of the film world in Germany, ignored by the mainstream. He toyed with the aesthetics of Nazi chic, exploitation and slasher films, Z-horror and arthouse. Somehow he became a kind of trash auteur for the intelligentsia – a forerunner, in fact, to the now well-established style of the Volksbühne theatre in Berlin, known for its critical adaptations of typical late-capitalist creations such as reality TV or talent shows (he did his own, Freaks 3000 (2003), which included only people with disabilities). Always a ferociously hard-worker, he contracted cancer aged 48 – and after years of neglect was asked to represent Germany at the Venice Biennale, which he posthumously won. A born exhibitionist, he documented his disease both on camera and via his blog. 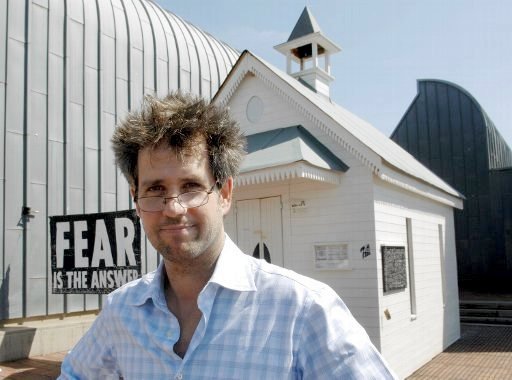 But Schlingensief was not merely an attention-seeking purveyor of trash: he took a cue from Fassbinder’s politicised, crude realism and deplored Wenders’ pseudo-poetry, mocking the latter’s 1986 Palme d’Or acceptance speech for Wings of Desire by placing it on the telly in Hitler’s bunker. Schlingensief hated Wenders’ polished version of Germany pretending to be America. In Schlingensief’s view, Germans were a mixture of kitsch, guilt and perversity, and the figure of a greedy, amoral German crops up throughout his movies. (His own grandmother’s maiden name was Goebbels.)

He was also the first filmmaker to react to German reunification in 1990. The German Chainsaw Massacre (1990) appalls us with its presentation of a West German family consisting of morbidly deranged, bloodthirsty, flesh-hungry, money-obsessed crooks, plagued by sexual perversities and perceiving their Eastern compatriots, now arriving en masse in search of jobs, as nothing more than pieces of meat to be devoured – fuel for a lucrative sausage business. Superficially inspired by The Texas Chainsaw Massacre, it contains unbelievable violence and tons of fake blood, as well as cannibalism, incest and rape, all in the style of a very funny absurdist comedy. In a similar vein, the last part of the Germany Trilogy, Terror 2000 (1991/92), depicts the greedy and disgusting locals of the fictional town of Rassau – including neo-Nazis, businessmen, a priest and a group of gangsters – mistreating and finally killing the refugees who are looking for work there. 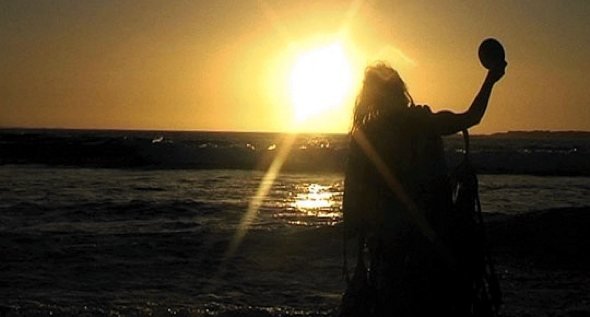 Schlingensief’s love of provocation and the baroque also found expression in opera, which is the focus of Opera Village. At the end of his life, as a ‘gift to Africa’, he began the construction of an opera village in Burkina Faso. The building work is now entering its final phase and the exhibition at the German Embassy comprises documentary film, photos and a model of the project. Earlier, in 2004, his version of Wagner’s Parsifal had been unsurprisingly booed by the conservative audience at Bayreuth. As a response, his later film The African Twintowers (2008) included fictional adventures of the Wagner family as colonisers in Namibia when it was under German rule.

But despite his various provocations, his final testament remains that of tolerance: his last work was staging Luigi Nono’s opera Intolleranza 1960, posing questions about the potentially patronising nature of humanitarian aid and attendant exploitation in Africa.