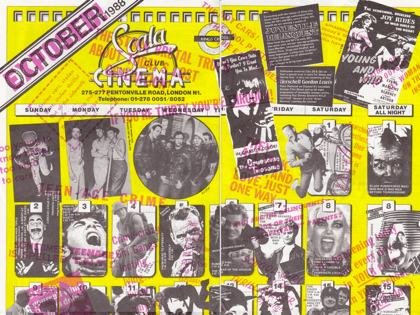 “Realism only comes to the screen when the film jams in the projector and the image begins to bubble.”
— George Kuchar

It’s now 18 years since the Scala Cinema, one of London’s landmarks of alternative culture, shut down – not in a blaze of glory, as blood-soaked credits rolled, but quietly, following an illegal screening of A Clockwork Orange (1971).

Whether the cinema jumped or was pushed, by 1993 the end was nigh. Home videos had long ago invaded every living room, and satellites beamed non stop movies into a growing number of homes. And yet, at a time when film distribution has become even further digitised and atomised, like a revenant from one of its horror all-nighters, the spirit of the Scala is back amongst us.

This week sees the launch of Scala Forever!, a six-week celebration of the cinema and the films that it showed. Taking place at adventurous venues all over London (with the noticeable exception of the Scala itself), the programme is an exemplary mashup of high and low-brow classics whose physical design painstakingly recreates the lurid majesty of the original cinema’s fold-out calendars.

Looking at an old programme now makes clear just how much work must have gone into keeping the venue running and the film prints coming – a herculean task that could only have been sustained with the energies of the young people at the helm. Those of us who grew up staring at video shop shelves may find it unremarkable to see John Waters films running alongside Hitchcock and the Marx Brothers, Dario Argento next to Michael Powell or Fassbinder next to Russ Meyer, but back in the 80s this kind of gleeful cross-pollination, inspired by underground film clubs and co-ops, represented a free and radical approach to film that would become something of a Scala trademark. 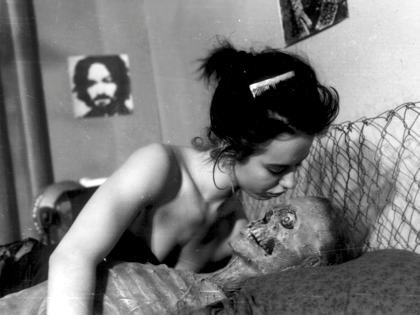 A large part of the Scala’s magic was the art of the daily double and triple bill, while weekends routinely saw horror, SF and rock ’n’ roll all nighters – all for under a fiver. Then there was the all-day and all-nighter, courtesy of Shock Xpress magazine’s ‘Shock Around the Clock’ festival, whose thrill-crazed audiences would emerge at 10am blinking and shuddering like owls in daylight. Whole weeks might be dedicated to particular director: I remember seeing almost all of Russ Meyer’s films, two or three at a time, night after fleshy night for a week, the memory now a hazy montage of giant bikinis, babes, bikes and bronzed neo-nazis.

The Scala was a cinema, the cinema, but it was about more than film. It was an environment unique to its time and space, one that can never be recreated. As well as the films it screened, the Scala is remembered for its often carnivalesque atmosphere, with audiences dancing, tripping, loving and sleeping in the aisles and on the bench seats at the front; for the live-in cats sniffing out rats and long-vanished chimps from the primate house it used to be; for the rumble of tube trains passing underneath; for the live bands and the screening of William Castle’s The Tingler (1959) with seats personally electrified by the Psychotronic Video store’s Bal Croce…

The Scala was an attitude: it was DIY and glamour, rock ’n’ roll and post-punk, hippy, beatnik and biker, transgressive, decadent and décharné. It was serious and fun.

For me, as one of its younger visitors, the Scala was both film school and Hollywood Babylon. My 50p annual membership, printed on card that became more like acid blotter as the year wore on, was a gateway to one of the best cinematic educations that money couldn’t buy.

Leaping up the stairs into the foyer with its lurid psychedelic comic strip mural of B-movie moments, then into the cavernous darkness of the auditorium, was an experience charged with a frisson of the unknown and, if not physical danger – though there were plenty of opportunities for that outside – then the fear that, one day, I would finally see too much. And perhaps with films like Necromantik and Nekromantik Two (Jörg Buttgereit, 1987/91), Mongolitos (Stéphane Ambiel, 1988), Heartbeat in the Brain (Amanda Feilding, 1970) and Thundercrack! (Curt McDowell, 1975), I did. But if so, I’m glad. 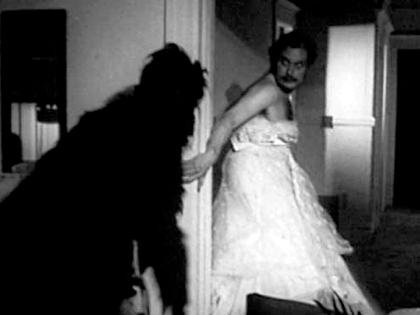 This last title dredges up one final Scala memory. I’d dragged two puzzled friends to an afternoon screening of McDowell’s infamous flesh-feast. Echoing a line from its star and writer George Kuchar, the film caught fire in the projector, first melting then bubbling up spectacularly on screen. The lights came on in the auditorium and we found we were alone, other than for a couple frantically munching their way through a large bag of bananas directly behind us and a pair of mac-clad old tramps sitting a respectful and hygienic distance from each other and, thankfully, from us.

Now they, and the cinema I loved, are gone. Or are they? As the handful of remaining repertory picture houses struggle to survive and even the once impossible-to-see Thundercrack! is due for a deluxe DVD release and is accessible to all on Youtube, the Scala Cinema has returned for one more assault on the city that spawned it. Could this time really be forever?