Where the mountain meets the street: Terayama Shuji

Poet, playwright and avant-garde filmmaker maudit, Terayama Shuji was both infamous and ubiquitous in late 60s and 70s Japan, and remains unforgettable there today. Tony Rayns recalls a legend. 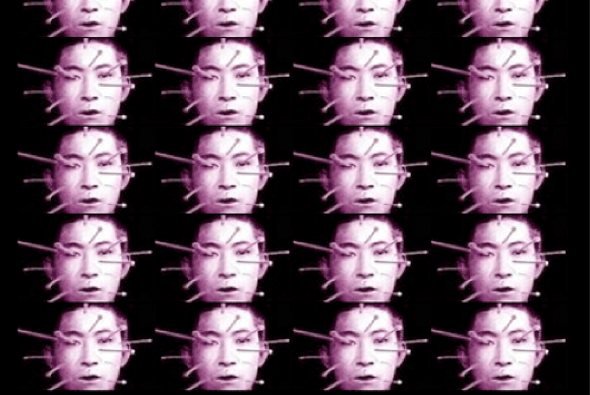 Terayama Shuji died of liver failure almost 30 years ago, but it feels odd to need to reintroduce him to a new generation in the West. His reputation is secure in Japan: books by and about him are in every decent bookstore, his movies are readily available on DVD and his theatre productions are still revived. His name is still current. But he’s largely forgotten in Europe and America. His theatre company Tenjo-sajiki last performed in London in 1978 (it was a play inspired by Jonathan Swift’s satire Directions to Servants and – full disclosure – I was a guest member of the troupe), and his films haven’t been much seen since the last retrospective at the National Film Theatre in 1987. And now he’s a museum piece at the Tate. The tribute is welcome, of course, but you can’t escape the feeling that a vital and subversive artist is being pinned down and classified.

Two experiences in Terayama’s childhood and adolescence were formative. He was born (in 1935) in Aomori Prefecture, in the foothills of Mount Osore – a ‘haunted’ mountain which has attracted ghosts and shamanists for centuries. He soaked up local myths and legends throughout his boyhood. And then he spent what should have been his student years confined to a hospital bed in Tokyo’s Shinjuku district, struck down by the nephritis which eventually killed him in 1983. Outside the window of his ward the alleys of Shinjuku were increasingly alive with student protests, street theatre and art happenings, plus the odd yakuza skirmish. (Shinjuku became the epicentre of Japanese counter-culture in the mid-1960s: see Oshima’s 1968 movie Diary of a Shinjuku Thief for details. You’ll probably need to clock a “rare DVD” site to find it, because Oshima’s greatest films are also missing from UK distribution.) Stuck in the hospital, Terayama conceived a parallel between the ghost traffic on Mount Osore and the street-life of Shinjuku. This perception gave him a vein of imagery which fed into much of his later work.

Terayama entered Japanese public consciousness as a poet, publishing neo-classical tanka (31-syllable poems) with a surrealist spin. By the time he was out of hospital and co-founding the Tenjo-sajiki troupe – the name means “Les Enfants du Paradis” – he was well on the way to national notoriety, on account of his widely publicised calls for teenagers to run away from their oppressive families and, in particular, to break with their domineering mothers. 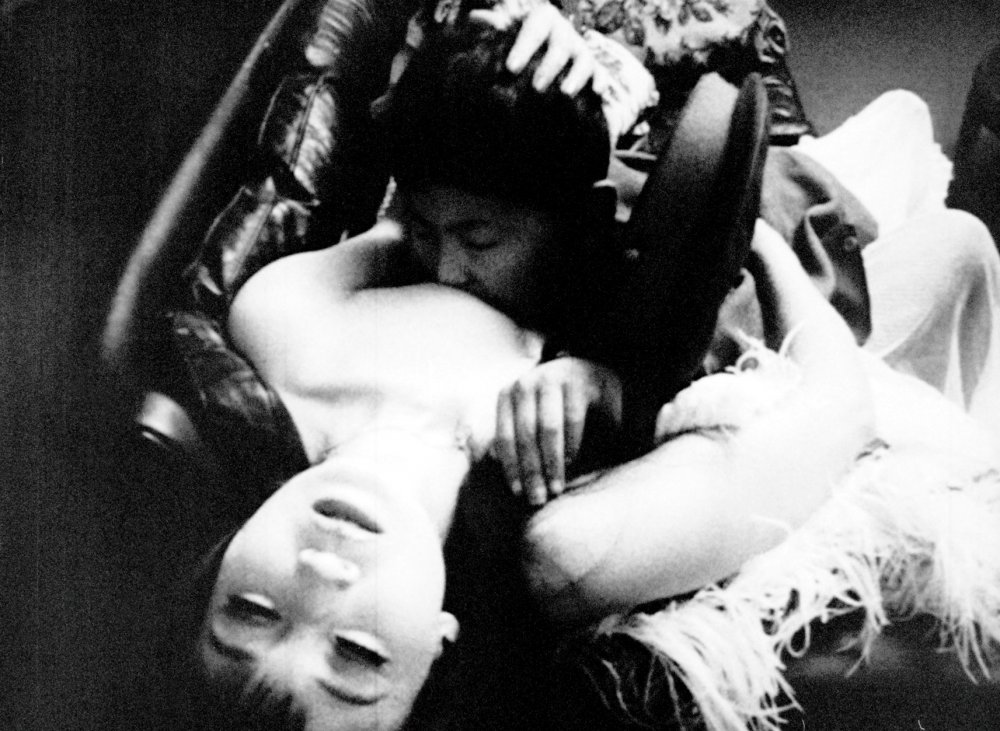 This would have been scandalous in any country; in conformist, group-think Japan it was like an earthquake. For the last 15 years of his life, he stayed in the public eye with a barrage of plays, films, novels and poems. Thanks to frequent appearances as a commentator on boxing matches and as a racing tipster, he also reached sectors of the public whose interests didn’t extend to the arts. He was what we’d now call a “pubic intellectual”, popping up often with idiosyncratic points of view on talk-shows and in news discussion programmes. And he did all this as a voice of the unaligned Left and as an unrepentant surrealist, calling for a revolution in the head.

All of Terayama’s work was interconnected. He quoted his own poems in his movies, and quite often put images and visual motifs from the plays on to the screen too. His one foray into mainstream genre filmmaking was Boxer (1977), which drew on his sports commentaries and featured a number of real-life champs.

The flow went in both directions. One of his short films, showing nails of all sizes invading the lives of the characters, ends by inviting the audience to step up and hammer nails into the screen. Another begins with painted harpies on screen insulting the audience’s passivity and impotence until one guy – a plant, of course – stops throwing popcorn and stands up to remonstrate; the women drag him into the screen, strip and humiliate him and then eject him back into the auditorium naked. (These and other film and live-action pieces will be performed at the Tate by Terayama’s loyal right-hand-man Morisaki Henriku.)

The final Tenjo-sajiki production, mounted in a vast docklands warehouse on three stages, each several hundred metres from the others, was a version of Marquez’s One Hundred Years of Solitude. And the final Terayama film, Farewell to the Ark (1984, completed by his team after his death), was in turn a version of the Marquez-based play, transposed to Okinawa and featuring the largest square peg and round hole ever seen. 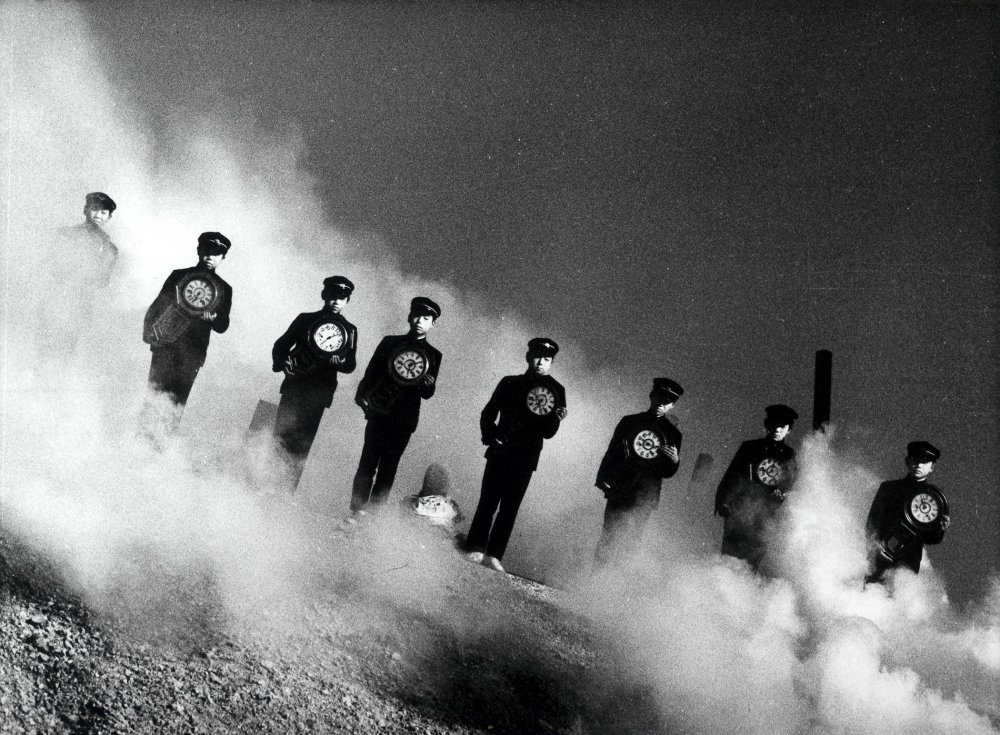 In his filmmaking, Terayama switched between features for theatrical release and ‘experimental’ short films for smaller-scale screenings more naturally than any other director I can think of. One reason is that both strands of his film work featured members of Tenjo-sajiki and drew on ideas they’d already explored on stage.

His earliest shorts (such as Emperor Tomato Ketchup, which imagines 5-to-10-year-olds mounting a revolution against controlling adults) were essentially group improvisations with his actors, and his debut feature Throw Away Your Books, Let’s Go into the Streets (1971) took off from a piece of ‘theatre vérité’ of the same name, in which members of the audience had been invited on to the stage to act out their desires and fantasies. But Throw Away Your Books imposed a typical Terayama narrative about a working-class boy’s rite of passage on its collage of otherwise disparate material, and this set the pattern for later features like Pastoral Hide-and-Seek (1974) and Labyrinth in the Field (1979), both of which also focus on young men exploring their erotic desires but with a new sense of aesthetic assurance.

Terayama’s last completed work in any medium was an exchange of video letters with the poet Tanikawa Shuntaro (known, amongst other things, as the Japanese translator of Mother Goose). Video Letter (1982) is full of small epiphanies as both ‘correspondents’ explore the possibilities of what was then a new medium, but it’s also a heartbreaking chronicle of Terayama’s physical decline and the pain he lived with in his final months. It brings his career full circle by returning him to his first love: poetry.

Related to Where the mountain meets the street: Terayama Shuji