Down the Bunka: Japanese underground cinema of the 1960s

Down the rabbit hole with the experimental Theatre Scorpio and its multimedia performance collectives. 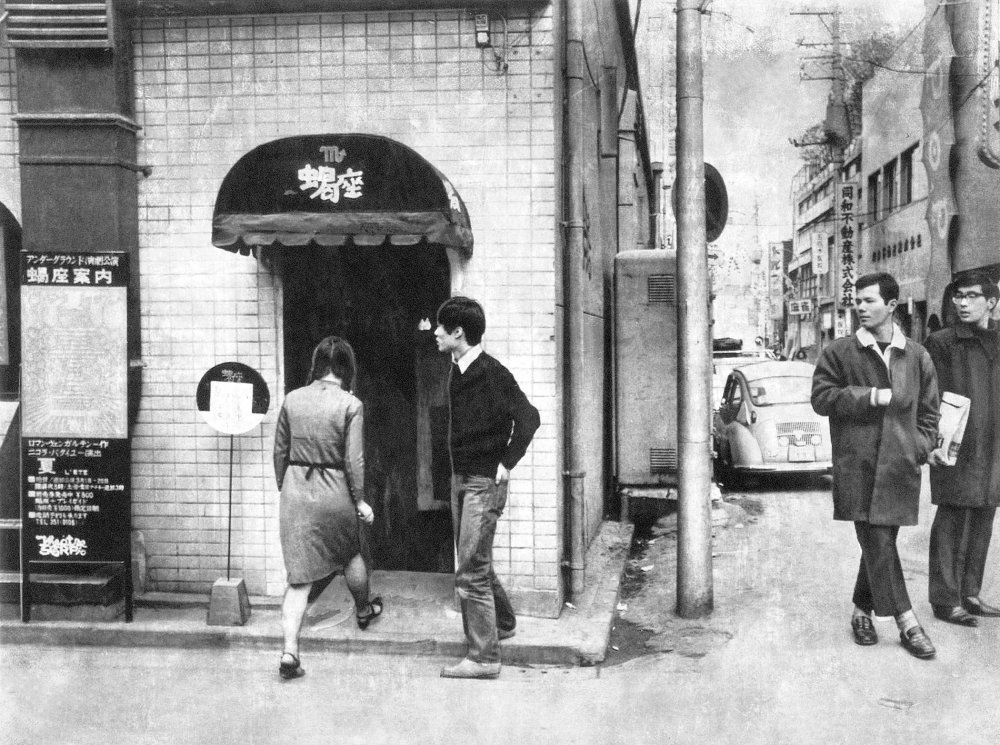 Established in 1961, the ATG itself was in the process of morphing from a distributor and exhibitor of foreign arthouse films in Japan into one of the country’s few vibrant sources of creative film production, starting with Imamura Shohei’s A Man Vanishes (1967) and Oshima Nagisa’s Death by Hanging (1968) – as Alexander Jacoby explores in the August 2011 issue of Sight & Sound.

The Theatre Scorpio would similarly become a legendary nexus for Japan’s experimental art scene, serving as a lively hangout space for many of the leading lights of underground (angura) theatre, music and dance as well as cinema. Its activities are honoured this month by a series of screenings and discussions curated by Close-Up Film Centre at various London venues, in advance of an ATG retrospective at the BFI Southbank in August; several of the titles are showing for the first time in the UK.

The Scorpio’s name was inspired by the Kenneth Anger classic Scorpio Rising (1964), and suggested by Mishima Yukio, the enfant terrible of the Japanese literary establishment (and subject of Paul Schrader’s 1985 portrait Mishima: A Life in Four Chapters). Mishima’s own stab at filmmaking with Patriotism (Yûkoku, 1966) – a florid depiction of the ritual suicide of Lieutenant Takeyama Shinji and his wife after the legendary ni-ni-roku failed military coup of 26 February 1936 – had premiered at the Shinjuku Bunka the previous year. 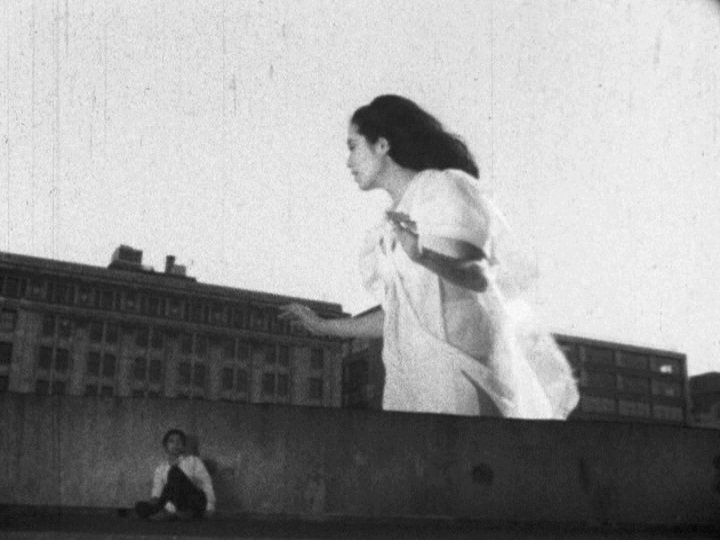 The venue’s inaugural run was Galaxy (Gingakei, 1967), an elliptical journey into a young man’s subconscious that represented the first feature-length work by Adachi Masao. (The unsatisfactory 16mm projection of his earlier Sain (1963) at the Shinjuku Bunka had allegedly been a key factor in ATG producer Kuzui Kinshirô’s decision to open the downstairs venue.) Best known for his collaborations with the pink filmmaker Wakamtsu Kôji and his subsequent involvement with the radical political group the Japanese Red Army, Adachi was one of the rising stars of the burgeoning experimental filmmaking scene, and Galaxy was greeted with packed attendances.

Adachi had been at the forefront of Japan’s post-war cinematic avant-garde almost since its inception, becoming an active member of the Nihon University Film Study Club (Nihon daigaku eiga kenkyû-kai or Nichidai Eiken) after entering the university in 1959. The university group’s key members – such figures as Okishima Isao, Hirano Katsumi and Jônouchi Motoharu – went on to establish the VAN Film Research Centre, a filmmaking commune under Jônouchi’s ostensible leadership, although true to the prevailing Marxist zeitgeist it espoused a more collaborative work process that sought to dismantle of traditional filmmaking hierarchies so that no one individual received directing credit.

Indeed, from conception to exhibition, ‘process’ became the operative word among the VAN members. Their film events were conceived as unique happenings often involving various creative agents linked to the Fluxus movement; more performances than screenings, they involved live soundtracks from noise musicians such as Kosugi Takehisa and Tone Yasunao, and performance art by Kazakura Shô and Ono Yôko. Jônouchi frequently re-edited his films and provided different soundtracks for each presentation.

During one such multi-media showcasing of VAN’s Document 6.15 – made to commemorate the anniversary of the death of the young protester Kanba Michiko during the 1960 demonstrations against the renewal of the Japan-US Joint Security Treaty (or Anpo Agreement) – in a large marquee during a mass student rally, a riot following the theft of one of the loudspeakers was believed by many to be an intentional part of the festivities. 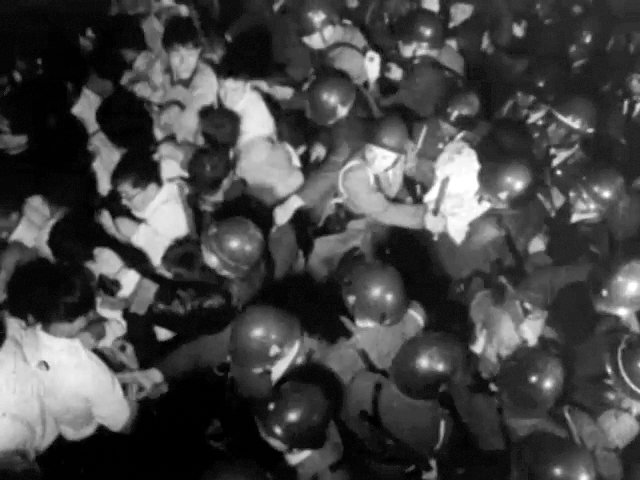 Similarly, during one of the legendary ‘Sain Ceremonies’ (Sain no gi) that surrounded showings of the Adachi-led project Sain – whose translated title of ‘Sealed Vagina’ presented a metaphor for the failure of the Anpo protests – the film reel itself was stolen ahead of its screening. The ceremony nevertheless went ahead in true Dadaist fashion without its movie centrepiece, unfolding in a riotous frenzy of live music, performances and drugs until a visit from the police who, aware of the members’ involvement with the student protest movement, cut short the alleged ‘political gathering’.

The VAN collective was one of a number of such circles among which various artists, musicians, filmmakers and freeloaders freely mingled.

The first to gain any recognition in the West was Japan Film Andependan, whose members (including Iimura Takahiko, Takabayashi Yôichi, Ôbayashi Nobuhiko and the well-known author on Japanese cinema Donald Richie) received a group award at the first Knokke-Le-Zoute Experimental Film Festival in Belgium in 1964. Richie himself claims to have introduced his colleagues to American underground filmmaking at a time when Japan had no such equivalent.

There was little to link the individual filmmakers in the Andependan group, however, beyond their stated intent of distancing their work from the commercial mainstream and avoiding the politicised rabble-rousing of VAN’s Jônouchi and Adachi.

Iimura’s work stressed the formal and performative aspects of film. His two ‘Cine Dance’ films, The Masseur (Anma, 1963) and Rose Colour Dance (1965), were active collaborations with the founders of the Ankoku Butoh dance movement, Ohno Kazuo and Hijikata Tatsumi. (The latter was also filmed by Richie in Sacrifice (Gisei, 1959) and by Jônouchi – himself an occasional participant in Butoh performances – in Hijikata Tatsumi, 1967.) Iimura’s Colour (Iro, 1962) consisted of a series of colour images projected onto a friend’s back, while White Calligraphy (1967) was a performance piece in which Iimura etched characters from the eighth-century historical text ‘Kojiki’ onto the frames of 16mm black leader as the film ran through the projector. 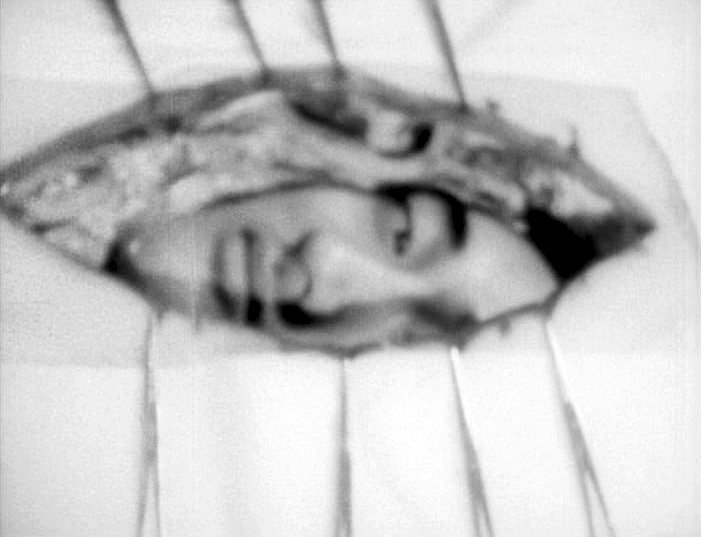 Ôbayashi, who later directed the psychedelic teen-horror House (Hausu, 1977), meanwhile playfully riffed on the works of European arthouse directors such as Vadim and Buñuel in his 8mm and 16mm ‘home movies’. His An Eater (1963) presents perhaps the epitome of his absurdist style, as a waitress for a sophisticated Western restaurant finds herself grotesquely served up as the next course for a particularly gourmand customers.

The Theatre Scorpio played host to the works of all of these directors, alongside others such as Katsu Kanai, a former employee of Daiei studio best known for such hypnotic, non-narrative pieces as The Desert Archipelago (Mujin rettô, 1969), Matsumoto Toshio, whose quasi-documentary portrait of Tokyo’s gay subculture Funeral Parade of Roses (Bara no sôretsu, 1969) was produced by ATG, and the poet-playwright Terayama Shûji, a towering figure in the alternative art scene of the period. Close-Up’s season presents a revealing snapshot of this epicentre of the unprecedented flowering of Japan’s creative avant-garde.

Related to Down the Bunka: Japanese underground cinema of the 1960s