Following 2014’s Godzilla, Round Two of a likely Monster Cinematic Universe Redux pitches its over-specced human cast into a 1973-period sally that holds its own with any number of pulp footnotes Kim Newman can name.

In the 1950s, animator Willis H. O’Brien, creator of King Kong for the 1933 movie, pitched a treatment that pitted the great ape against another major monster. King Kong vs Frankenstein was sold to Japan’s Toho Studios, owners of the Gojira/Godzilla franchise, and morphed into 1962’s King Kong vs Godzilla, which introduced new, more colourful versions of established characters and set the kaiju-vs-kaiju pattern that would be followed by many sequels and spinoffs.

On the model of the Marvel Cinematic Universe, Kong: Skull Island establishes connections with Gareth Edwards’s Godzilla (2014), down to a post-credits scene teasing Godzilla and some other old monster friends from the Toho stable. So the game plan for Warner Brothers and Legendary Entertainment seems to be a new King Kong vs Godzilla… but two set-up movies had to be got out before the bell could sound for that awe-inspiring/fan-pleasing grudge match.

Though it has nods to all three previous films called King Kong – including, thanks to the 1970s setting, the little-liked Dino de Laurentiis production – Kong: Skull Island isn’t yet another version of the ‘king comes to New York’ story. Instead, we get a fairly standard ‘lost world’ jaunt, with cribs from Apocalypse Now to add a relatively fresh psychedelic Nam trip vibe (the on-the-nose classic rock soundtrack obliges with Creedence Clearwater Revival’s Run Through the Jungle at precisely the expected moment). Self-aware lifts from other classic adventures include Samuel L. Jackson as a martinet seething with an Ahab-like obsession about killing the big gorilla, and John C. Reilly homaging Treasure Island castaway Ben Gunn. 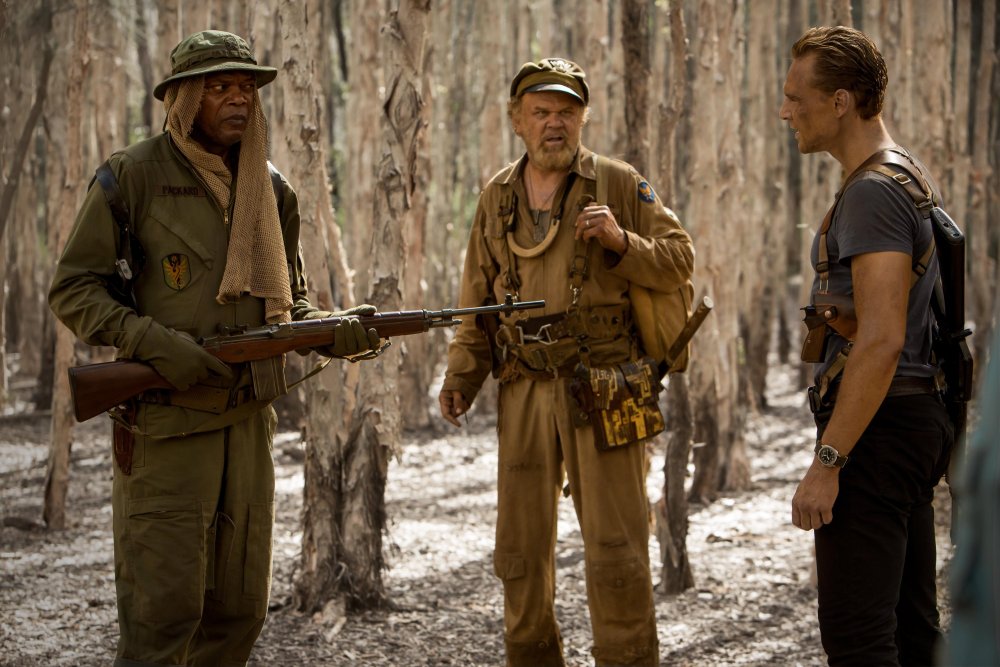 The film is fast and playful, rushing through its few ponderous eco-aware moments to get to the next monster chase or attack. A battle-scarred, unsentimental Kong, mo-capped around a Toby Kebbell performance, updates his buzzed-by-biplanes set piece in a terrific initial clash with a squadron of attack helicopters, which he bats out of the sky or tosses into each other. Other pulp-magazine cover images involve explorers hiding in giant smashed skeletons as bizarre monsters attack, or standing still in silhouette and looking up at looming giants.

The fauna of Skull Island owe more to the mash-up biology found in Toho’s monster rallies than to palaeontology or classic myth – a chimera of giant locust and fallen tree, a spider with bamboo legs, what looks like a vulture skull supported by lizard forelegs and a lashing python tail. Like the Mutos of Godzilla, these ‘Skullcrawlers’ are preliminary-round beasts, built up as fearsome and then decisively beaten – raising the odds on an eventual showdown between real monster kings.

Also as in Godzilla, a vastly overqualified cast take on roles that wouldn’t have stretched Sonny Tufts or Irish McCalla in the 1950s: Tom Hiddleston and Brie Larson mostly duck out of the way so that the main attraction can strut his stuff, though Larsen does get a shot at being picked up in Kong’s paw (and shoved somewhere amusingly unpleasant). Director Jordan Vogt-Roberts, a newcomer to this level of franchise filmmaking, seamlessly integrates shot-on-location stuff with CGI monster action, and occasionally includes grace notes about cutting-edge-for-1973 reel-to-reel tape or computer display tech.

The film doesn’t try to compare with the depth and resonance of any given King Kong, because it lacks the tragic last stand. But it holds its own in a weight category with pulp footnotes including The Son of Kong (1933), King Kong Lives! (1986) and Toho’s reuse of its shaggy shabby Kong in 1967’s King Kong Escapes.

Revision (13 March 2017): the last line of this review originally referred to Toho’s reuse of its “shaggy shabby Kong suit”. We are advised that a distinctly different costume was deployed.