Waves of sound: Jason Singh on his live score for Drifters

The beatboxer and sound artist is accompanying John Grierson’s silent documentary on a tour of British fishing towns. He explains how he channels the sound of the deep and the distant past for each performance. 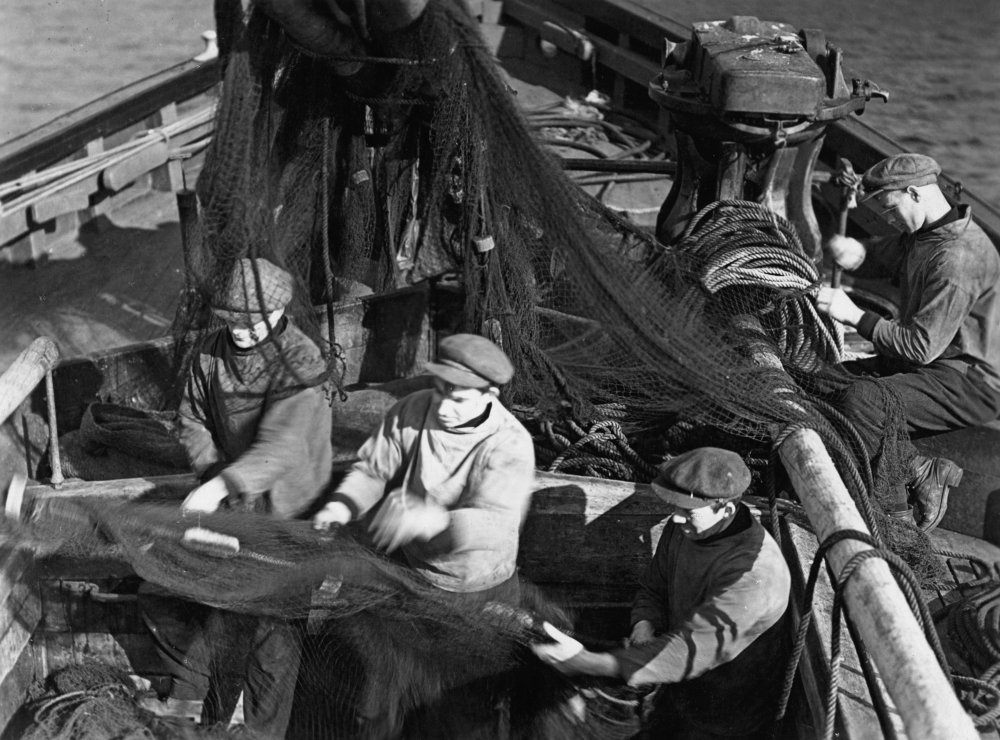 In action, Jason Singh resembles a conductor. Standing, with his back to us, his hands gesture – intuitively, searchingly – as if to mimic some kind of movement. As if to will, as if to sculpt, certain images into being: fish swimming, perhaps, or a boat bobbing. Performing in front of a cinema screen, however, Singh isn’t so much dragging images to life as taking his own cues from them: they belong to Drifters, the 1929 documentary by John Grierson.

The Following the Fleet tour continues in Aldeburgh on 28 September and Great Yarmouth on 30 September 2017.

Singh is a beatboxer. A sound artist, a composer. On 24 September, at the Customs House in South Shields, he generated (from his mouth, from his throat, from deep within his gut) another performance of Following the Fleet: Drifters, a six-date tour pairing his live vocals with Grierson’s classic. Produced by A Kind of Seeing, Following the Fleet made a similar tour, in autumn 2016, of Scotland’s former major herring ports. On this run, the ports of call extended down, from Edinburgh, to include England’s North Sea coastline: preceding South Shields were Leith, Hull and Seahouses; Aldeburgh and Great Yarmouth would follow.

Singh was originally commissioned to score Drifters by the BFI, for a dual-format home video reissue, along with Eisenstein’s Battleship Potemkin (1925), in 2012. But the live element seems integral to the experience: watching him respond to onscreen events, or watching the film in awareness of such a masterful interplay, renews the sense of awe that film projection, in its earliest days, would inspire. 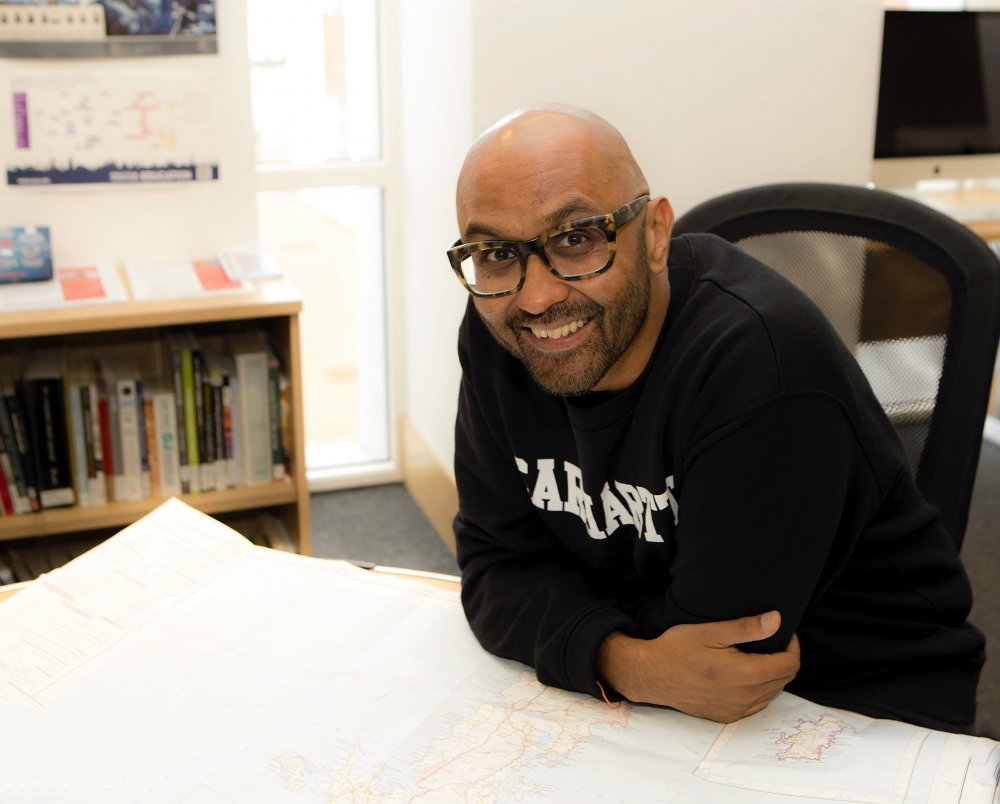 “My background is live performance,” Singh tells me. “As a beatboxer, as a drummer, percussionist, turntables, whatever. It’s always been about me on stage performing to a crowd or audience that can see me. With live scoring, I’m still there but the emphasis moves away from the actual performer to what’s happening in the film. So still being able to respond, engage, interact, communicate, collaborate – all that’s still happening. A lot of the time, when I’m in the zone of the film, I can hear people saying, ‘Oh my God he’s doing that with his voice.’ That’s a barometer, really, to go, ‘Yeah, we’re in.’”

Another advantage to operating live is that, though Grierson’s film is a work of mechanical reproduction, no two performances by Singh are the same. Building on a pre-prepared template of drones (again, his own), his method allows for much improvisation. “I’ve started some performances where the ships are going back to the harbour and that’s been a drum and bass thing, and I’ve been in some sound systems where it’s ended up as a dubstep, dub, techno vibe. It changes. With projects that repeat, I try and always find a way where I’m constantly challenged. The worst thing for me is that if I get bored, or get stuck in a thing, it totally comes out. I’m not connected with it.” 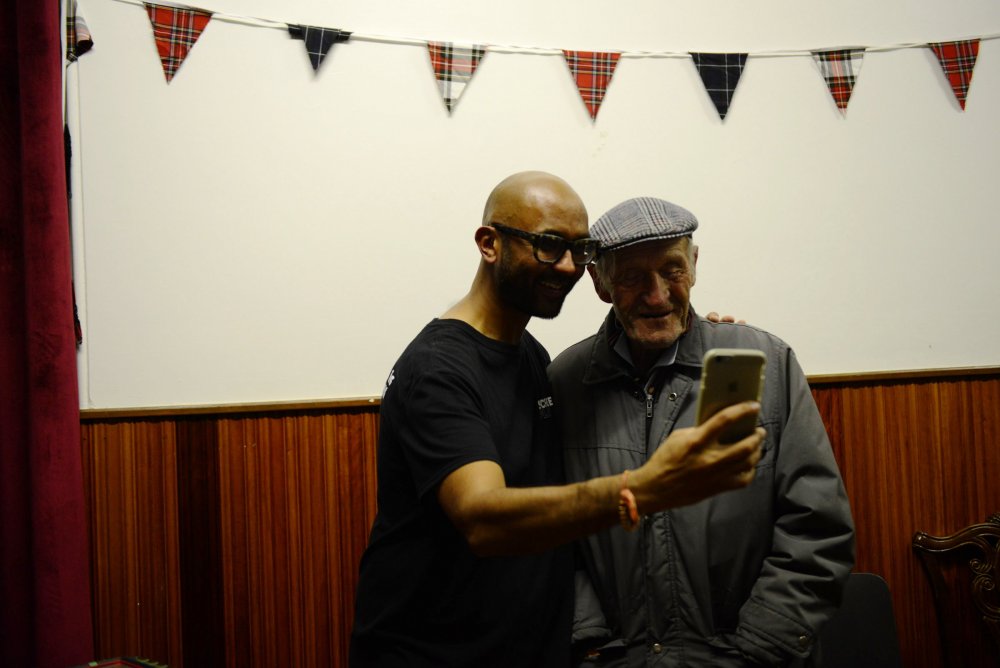 Such variations are underwritten, no doubt, by the range in chosen venues aims (the Customs House performance was presented by the Old Low Light heritage centre, situated across the Tyne in North Shields). “The great thing about doing this,” says Singh, “is that the venues have changed so dramatically over the years. I started doing it around 2012, and it’s been to film festivals, music festivals, synagogues, churches, tiny little theatre spaces – like, 30 people max.”

If this assists the tour’s local outreach aims, so too does its engagement of other musicians from each community. At the Customs House, prior to the main event, excerpts from Amber Films’ output and the (Middlesbrough-based) North East Film Archive – including Sheila Graber’s Howway the Lasses (1977), an animated hymn to women’s emancipation – unfolded with accompaniment from two young singer-songwriters from the region: Eve Simpson, of South Shields, and Aaron Duff. The latter, from North Shields, performs as Hector Gannet – the last vessel, a steel-stern trawler that capsized in 1968, on which his grandfather worked. A nice touch: Simpson’s vocals, which belie her 17 years, came in just as an onscreen voiceover chimed: “Though the market may be unchanging, old surrenders to the new”. 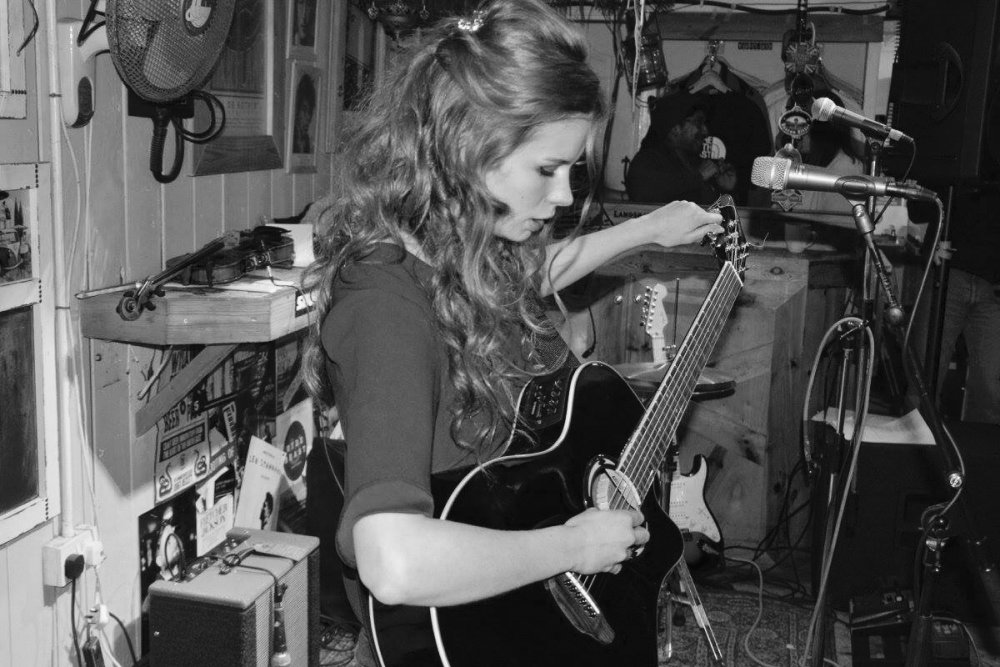 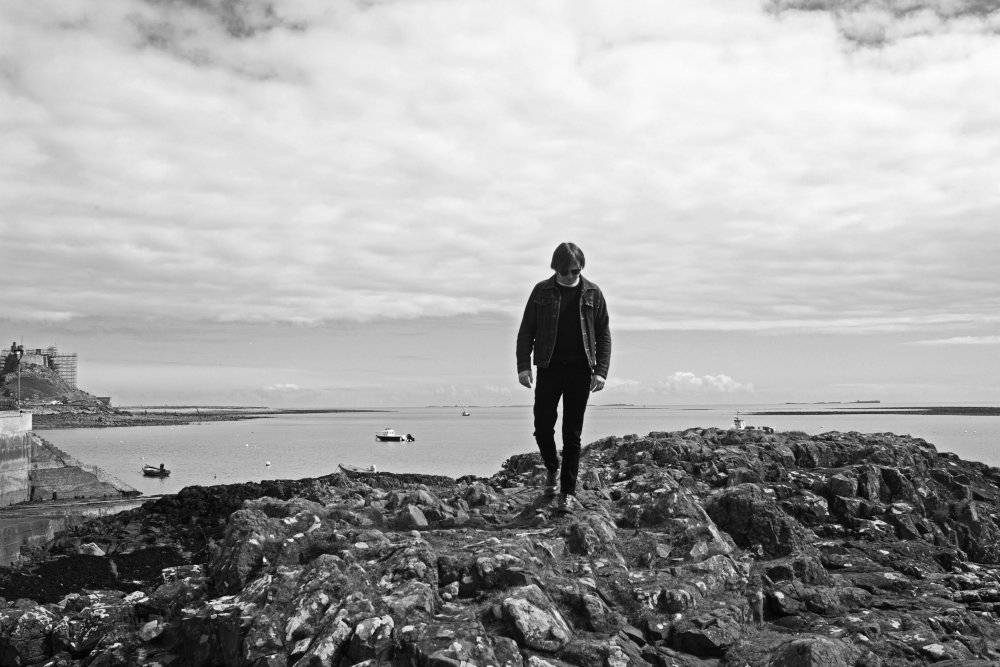 Singh, master and commander, is the tour’s permanent fixture. A large part of the enrichment and enjoyment, in the Drifters performance, comes not just from the way in which he is able to layer his verbalised sounds, but also from the way he integrates the resulting soundscape into the shifting rhythms of Grierson’s montage. From the switch in pace when Basil Emmott’s camera ventures underwater (“Dogfish and eels, destroyers of the deep…”) to that brilliant sequence in which fishermen work to capture 150,000 herrings (“More steam for the straining winch…”), Singh delivers a remarkable range of complementary textures.

There are musical ambiences (something like a neo-classical soundtrack), and there are more traditional beatboxing energies (Roni Size, Grooverider). But it’s the combination of these, with a multitude of effects (bassy chugs, high-pitched herring gulls, crashing waves, hissing steam), that deepens the experience. Where do these sounds come from? 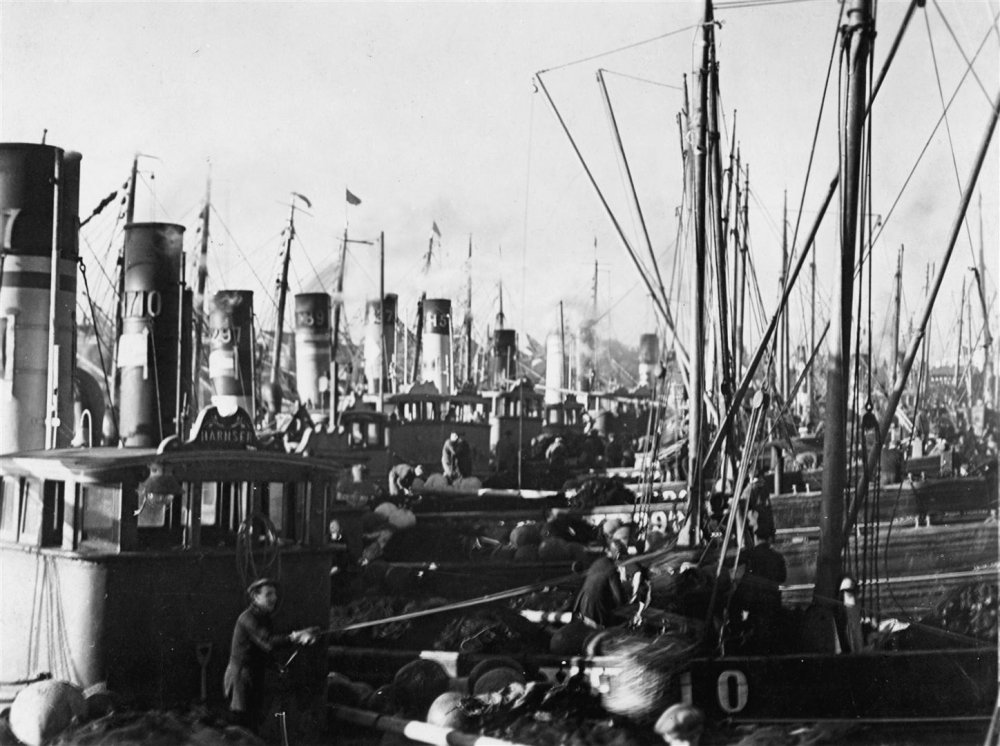 “It’s coming from various parts, actually. For me, the sea is the drone. The sea is the constant thing that happens throughout. It brings people to it, it’s what people are on, it’s what people are inspired by, it’s what people eat from. And that drone is something that I wanted to keep as the texture of the sea throughout. So when I’m making those textures, and doing a lot of the low-end stuff, it’s coming from my gut.” He demonstrates. “If I’m doing sub sounds, it’s like this.” He demonstrates again. “If I’m doing high-end sounds, it’s like this.” And again. “So it’s all of those things. Throat, solar plexus, and naval cavities. To get those Mongolian throat-music type frequencies.”

This requires, in obvious ways and for obvious reasons, a great deal of training. To what extent, however, does it require some knowledge of one’s own biological makeup? “That’s something that I try to stay away from. I do work with singers and a lot of vocal practitioners, who are very, ‘This is what you do, and this is what’s happening to the vocal cords.’ For me, that’s not what my practice is about. 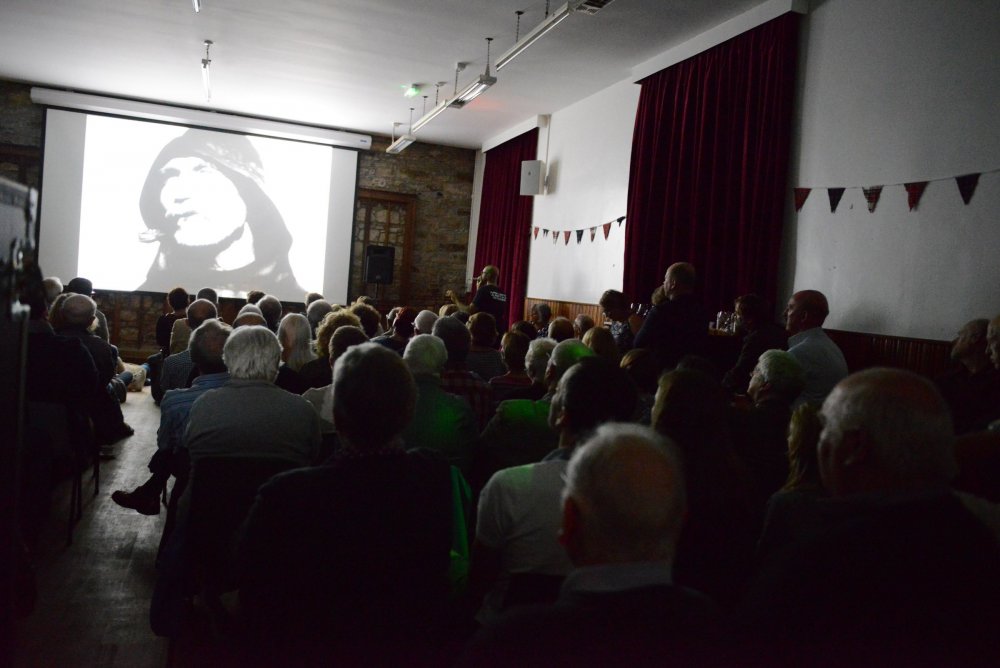 “What I’m trying to do is understand how I can generate frequencies from my body through the process of looking inwards. It’s almost like a meditation. Sometimes I’ll be pushing sounds into different parts of my mouth and my body, and trying to figure out what it’s like when I’m lying down, when I’m on my side, when I’ve got a bucket over my head. A lot of it is listening. The hotel we were staying at had a certain fan in the bathroom, and just listening to the drones and tones that it was making, I’m thinking, ‘How do I copy that?’”

How does he? “The process is first of all listening, absorbing, more than anything else. It’s not just to listen to the sound, but to listen to what I think might be making those sounds. So, if it’s a fan: is it plastic, is it metal, what casing is it in? Is it going up a chute, is it a plastic chute, is there any dust or dirt that’s catching on there? Trying to get all those frequency ranges” – he does them, in sequence – “and putting all of those together, you get the fan.”

To layer his sounds, and to loop them, Singh relies on a small machine. He talks kit and process: voice-transformer (made for analogue synths), which is how he shapes bass frequencies from, adds reverb to, and scatters and spatialises his voice. And then: guitar effects pedals (bass octaves), modulator (sub sounds), space echo, Kaoss Pad (sampling, processing). Does he use his feet? “No, everything is hands.”

I ask him, finally, if there are any other films that he would like to score. “Several. Top of the list is 2001: A Space Odyssey. To do that – I don’t know how – but that would be my film. I’d like to do Akira. And I really love the work of the Quay Brothers. Their stuff has always inspired me. The subtleties of their animation, the way they animate iron filings – I’ve always been fascinated by that.”

There would be, for Singh, a natural leap from the Grierson to the Kubrick. “Weirdly, Drifters is the closest I’ve got to 2001, because to me it feels like a sci-fi. It’s got all the classic hallmarks, especially with this thing about technology. The film is 1929, but it feels like a very contemporary film with those issues as well. That same thing, this vessel is going out into the middle of nowhere with this group of people. Anything could happen!”

Related to Waves of sound: Jason Singh on his live score for Drifters