The remix artist known as People Like Us talks firebombing Julie Andrews, playing Exquisite Corpse with Pirate Bay – and keeping her inner policeman under lock and key.

“Every time I watched The Sound of Music, I imagined Julie Andrews running up the hill, spinning around and triggering Armageddon. And when I watched Apocalypse Now with all these aerial views of helicopters, I thought ‘Wow! That’s like the air over Salzburg at the beginning of The Sound of Music’.

“So I put ‘The End’ by The Doors on the audio timeline next to ‘The Hills Are Alive’, and it turns out they’re in the same key. And I only had to time-correct one of them slightly and the two films played perfectly on top of one another. But that happens a lot…”

I’m sitting in the south London home of Vicki Bennett, aka People Like Us [homepage], surrounded by computers, hard drives and scribbled sheets of film descriptions, cut out and pasted together in apparently random manner. But there is order to the disorder: this is the heartbeat of her spellbinding visual and filmic collages, created through raiding online archives and splicing hitherto unrelated filmic scenes together. Bennett’s world is one in which the aforementioned Julie Andrews and Jim Morrison sing together in glorious disharmony (The Sound of the End of Music, 2010) and Ingmar Bergman enjoys a day at the races with Telly Savalas (Genre Collage, 2009 [homepage]).

“The thing about the mind and the universe of creativity is that they are both sympathetic to you, they all want to talk to each other,” she says. “I really believe the work we make isn’t ours, it already exists, it’s folk culture. I’m a folk artist working in a digital age, or the age of mechanical reproduction.”

The work of People Like Us no longer exists purely on the fringes of the cultural milieu. While her origins lie in the Brighton improv scene of the early 1990s, Bennett has since seen her work shown at the Tate, Sydney Opera House and the Barbican, and, on the afternoon we meet, is preparing to tour two performances – Gesture Piece [homepage] and Consequences (One Act Leads to Another) [homepage] – while finishing a piece on cryptozoology commissioned by Channel 4, to be screened this autumn. 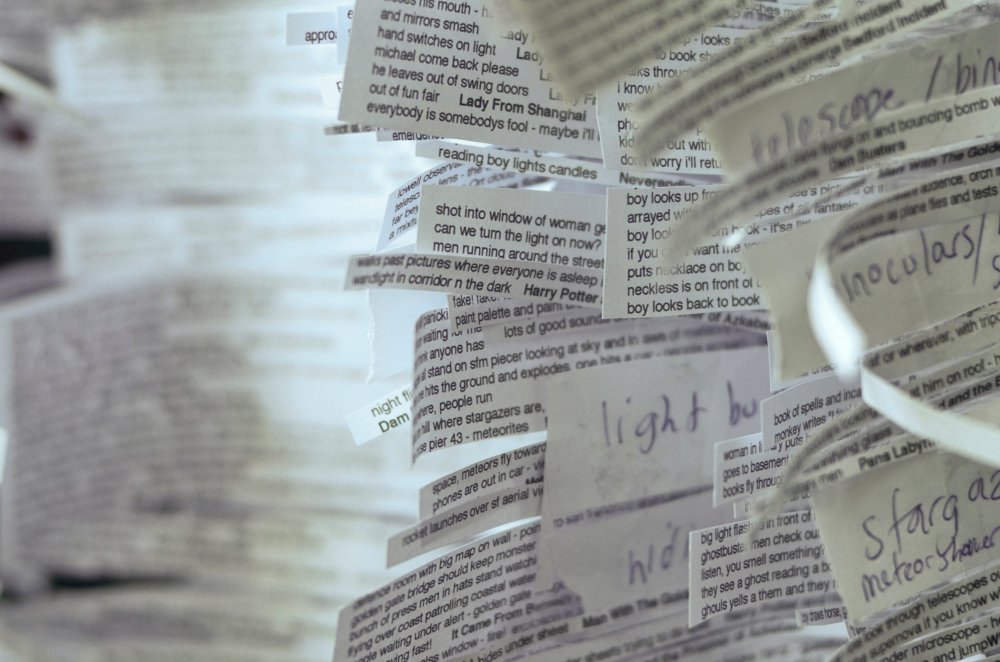 The paper version of Consequences: One Thing Leads to Another

“I started a degree in Fine Art and didn’t finish, which I don’t regret,” she reflects. “I made my first tape pieces by recording Radio 3 and 4 in the daytime and making spoken-word cut-up pieces. I knew about Burroughs and cut-ups, but wasn’t really aware of the wider field of language. I was naïve, just trying to fill up my time with being creative in a way that was affordable in my twenties.”

This naivety reached archive fever pitch with the advent of broadband and peer-to-peer file-sharing networks. “Before 1999, finding material was done through VHS and hiring things from places like Blockbuster and taping it,” she now says. “But when I found Napster in 2000, that transformed the audio I was making. And when I found people [through online communities] who had something I liked, I’d download everything else they had. I still do that with Pirate Bay, just to give me ideas. I believe in abundance creating your own limitations. I don’t want other people limiting my creativity due to a lack of distribution. We all have our own codes of ethics and creative limitations and that’s enough.”

Of the copyright issues involved, Bennett is defiant. “Steven Stapleton [from Nurse with Wound] was the person who made me realise you could actually publish things and not get sued. Because there was this stupid thing in the early 80s which said if you publish anything with appropriation on it, you were gonna get in big trouble – ‘they’ would know.

“It scared people, and still does. But if you carry on down that line of thought you get very depressed and you make no work. There’s a policeman inside your mind whom you have to be careful not to let loose because he’ll start telling you you can’t do things. If you get the fear and paranoia, it’ll lead to nothing and you won’t be an artist, you’ll be a worrier.” 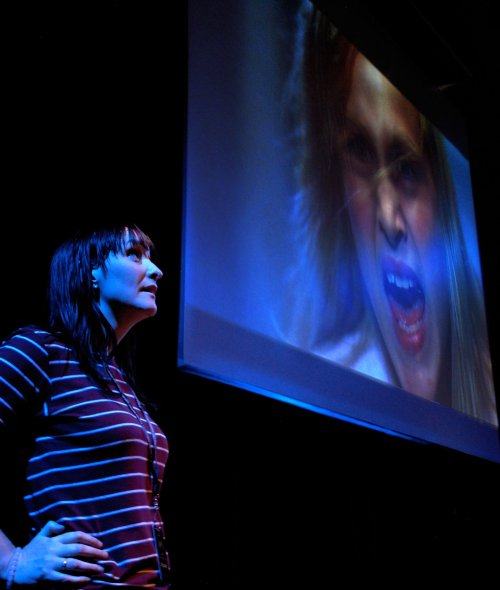 This isn’t to say the films created by People Like Us are just famous film scenes piled on top of one another. Her work is a feverishly illuminating conflagration of the burlesque and carnivalesque – and often incredibly funny.

In Genre Collage, the beautiful, pastoral imagery from Charles Laughton’s The Night of the Hunter of the sleeping children on the riverboat bleeds into the earth-rise from Kubrick’s 2001: A Space Odyssey, before the sky erupts amid the tornado from The Wizard of Oz. 2011’s The Magical Misery Tour! [homepage] deconstructs the horror movie genre only to reconstruct it as a strikingly witty and upbeat journey through the canon of ghastly scenarios.

This is even more evident in the live shows. Her new Gesture Piece sees Bennett collating hundreds of scenes containing gestures or instructions which are interpreted in turn by live musicians and artists to create unique audio accompaniment. Bennett is the only constant, acting as a conduit through which all this energy surges.

“I’m making lists and trying to order them in a way that makes sense,” she says. “There’s that whole idea that there are only a certain number of story archetypes. It’s nice to think that narrative has always existed for human beings, that we’ve always gathered around stories.

“It’s more about discovery [than invention],” she adds, of her divining method. “A lot of the time when I’m making work, I laugh and think ‘I didn’t do that, it did itself!’. It’s the incongruous things that happen along the way that make it funny.” 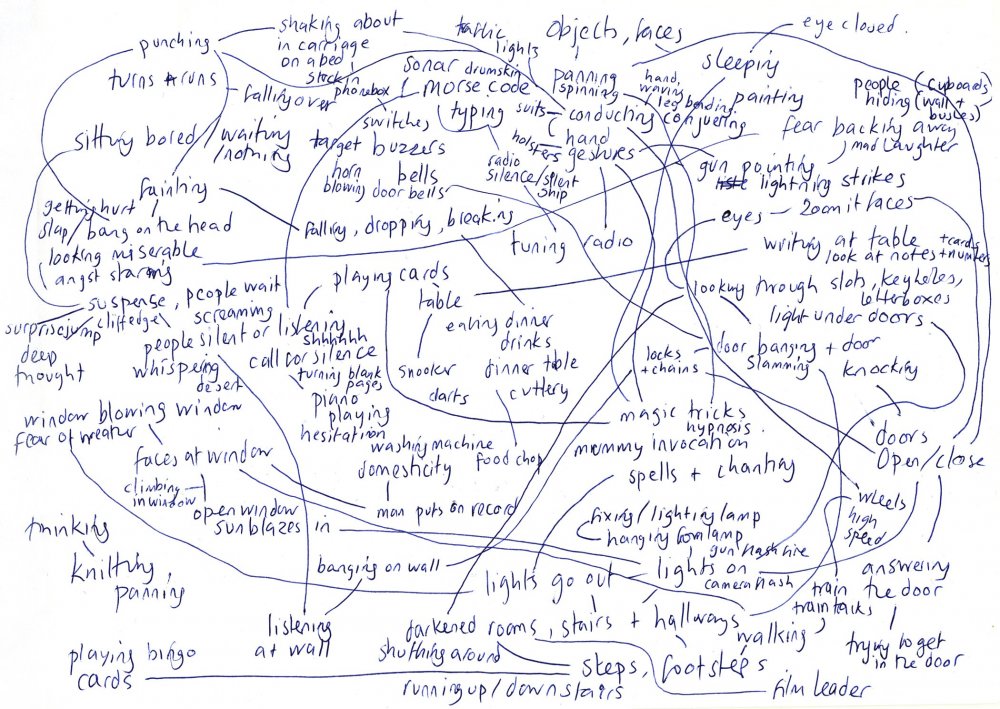 Looking back, Bennett expresses surprise at what she has achieved, but she’s clearly proud of her role as cultural catalyst, forcing the hand of chance.

“This is about sharing knowledge and information. Being creative is all about making connections,” she says. “For each piece, I watch about 150 films and make notes on each film I watch. I put them on the floor, cut them into scenes, put the name of the film on it and look at all the different things they have in common through the text description.

“It’s like the Surrealist game Exquisite Corpse. You’ve got all this information but it’s partly blind because you don’t know where it’s going; you make it by putting the story together on a tangent.

“All these pieces of paper are about connections,” she continues. “That’s all there is; you can call it art or whatever the hell you want! The art part, as Duchamp said, doesn’t really matter. The important thing is that you are using your intellect and creativity to make magical connections between things.”