A culture preserved in Amber 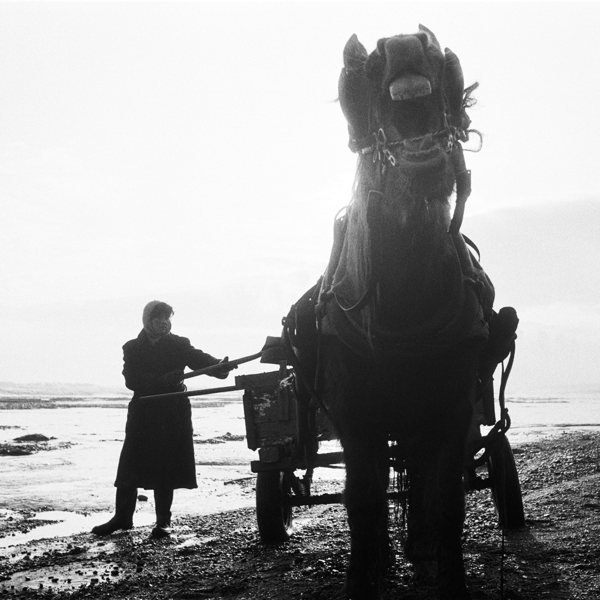 I am a north-easterner, Easington-born: first to knock, first admitted and all that. When travelling abroad, I find that while a few people may have heard of Sunderland, the city built on shipbuilding and coal-mining where I grew up and still live, hardly anybody knows Easington, a few miles down the North Sea coast.

For Ever Amber: Stories from a Film & Photography Collection runs at the Laing Art Gallery, Newcastle until 19 September 2015 and at the Tyneside Cinema until 30 September 2015. You can see the catalogue at amber-online.com.

“Billy Elliot was filmed there,” I’ll mention, citing Stephen Daldry’s popular 2000 release which I first saw under the title Dancer (the changed was effected to avoid confusion with Dancer in the Dark, of all things), and then squirmed through a press conference as the Dorset-born, Somerset-raised Daldry harped on about how closely he’d worked with this unemployment-ravaged community over a period of months – in a village whose name he was consistently unable to pronounce (the ‘s’ sounds like ‘z’, though proper locals would usually say something akin to “Een’tn”, with a very ‘swallowed’ “t”).

I’d also heard from my Easington relatives that Daldry and company had stirred some ill-feeling by asking former pitmen to play policemen – the film takes place during the enduringly divisive 1984-85 Miners’ Strike – and then expressing bemusement at their reactions. Such are basic lapses of tact and professionalism which the personnel of the Amber film and photography collective, based ‘up the road’ in Newcastle, would never have dreamed of committing; likewise, they’d have avoided Billy Elliot’s sloppy, inexplicable hodgepodge of British regional accents. 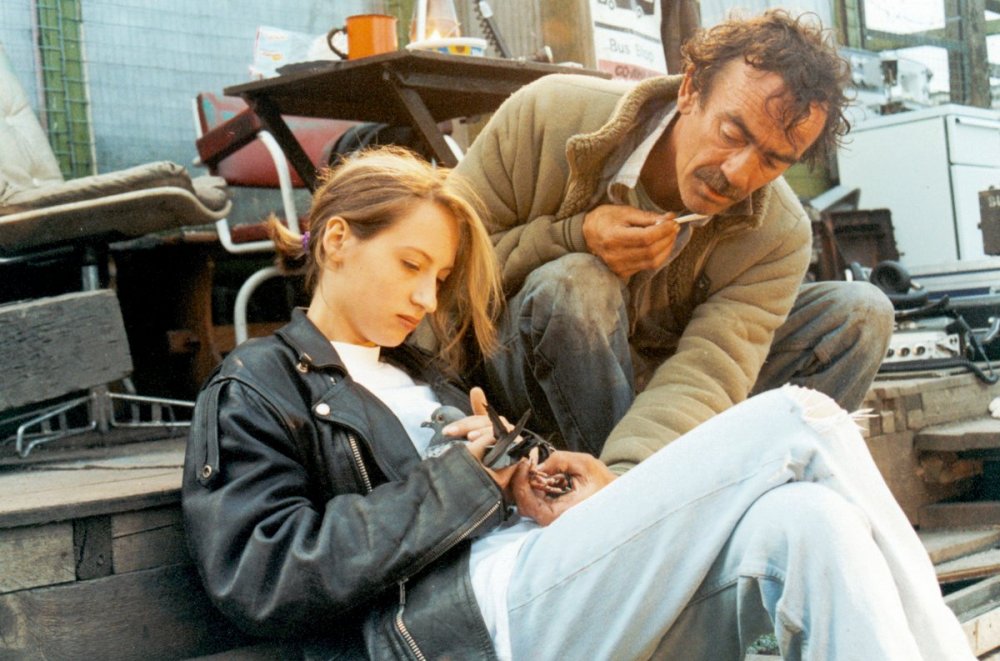 Amber in fact spent a full decade working with communities in and around Easington in the former East Durham coalfield, and their engagement yielded three of their eight feature-length fictional films thus far: The Scar (1997), in which a formerly firebrand left-wing activist falls in love with a drift-mine manager; Like Father (2001), tracing the tricky relationships between three generations of males; and Shooting Magpies (2005), examining the devastating impact of drug addiction in post-industrial areas.

The former stars one of my teachers from my (somewhat notorious) comprehensive school, while among the key plot-points of Like Father – the listing of a pigeon cree to prevent its demolition – is based on actual events in Ryhope, where I grew up and where my parents still reside. My father worked ‘down the pit’ at Ryhope Colliery upon leaving school in 1946 until it closed in 1966, alongside his brother who later became treasurer of the nearby Working Men’s Club.

The often strikingly unreconstructed and old-school north-east working-class culture is one which Amber’s films and photography has documented, chronicled, celebrated and dramatised over the past 47 years – as displayed in For Ever Amber, a new exhibition at Newcastle’s Laing Art Gallery with an accompanying retrospective at the nearby Tyneside Cinema. It’s one that I happen to know intimately – indeed, in some ways I’m still part of it: every Tuesday night, if I’m not toiling at some overseas film festival, I can be found at South Hylton WMC near the bank of the river Wear, narrowly losing at dominoes. 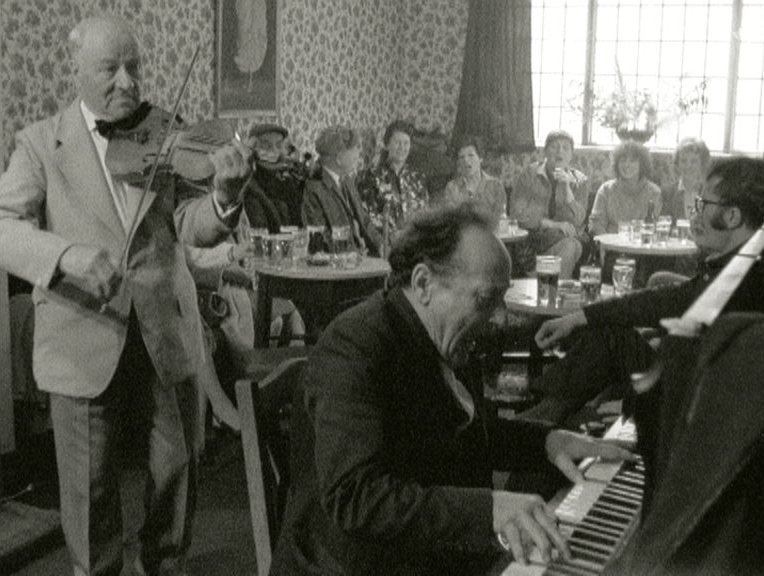 For decades I, like so many in the north-east, largely took Amber for granted; or worse, unthinkingly patronised them as middle-class do-gooders, outsiders from ‘down south’. Growing up in the 1970s and 80s, it wasn’t so unusual to see the north-east and our culture represented on the small screen – When the Boat Comes In, The Likely Lads, Auf Wiedersehen Pet, Byker Grove, multiple late-night showings of Mike Hodges’s lurid 1971 Tyneside-noir Get Carter – and then in 1986 Hollywood stars Melanie Griffith and Tommy Lee Jones came to town (Newcastle) to make Mike Figgis’s Stormy Monday alongside Geordieland hero Sting.

Amber’s connections with Channel 4 during the early, radicalism-embracing Jeremy Isaacs years (1981-87) ensured regular TV exposure for their short and mid-length documentaries such as Byker (1983) – a polyphonic profile of a Newcastle district before and during a ‘slum’ clearance initiative and, like so many Amber films, a project which grew organically out of a photography series (in this instance, by collective co-founder Sirkka-Liisa Konttinen). 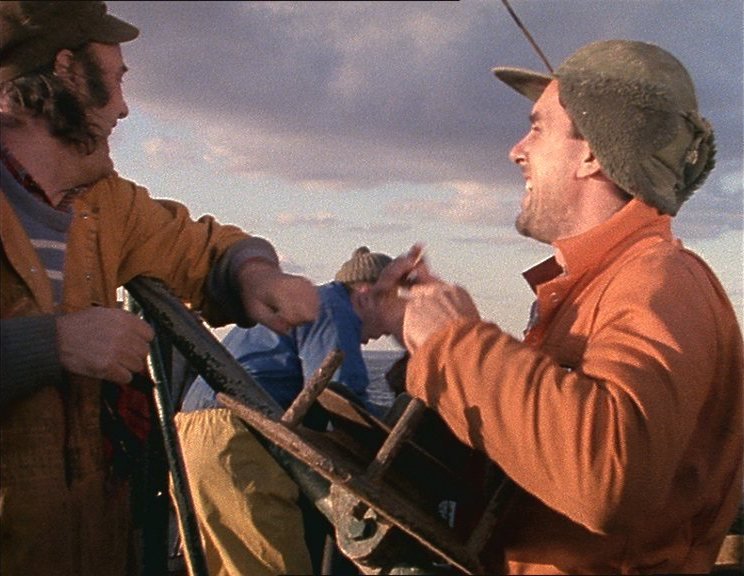 Channel 4 duly showcased Amber’s first fictional features: Seacoal (1985), a rousingly elemental affair set among a Northumberland community of professional beach-scavengers; T. Dan Smith (1987), a multilayered portrait of the disgraced former head of Newcastle city council which echoes Get Carter and informs Stormy Monday; and In Fading Light (1989), a fishing-boat saga which in retrospect forms the missing link between Wolfgang Petersen’s The Perfect Storm (2000) and Harvard Sensory Ethnography Lab’s Leviathan (2012). Meanwhile Amber’s outstanding photography commissions (Keith Pattison, Chris Killip, Tish Murtha) and exhibitions (their collection includes classics by Weegee and Cartier-Bresson) popped up frequently in galleries and exhibition-spaces in the area and beyond.

The most attention I paid to them was around the time of Like Father, the tale of a struggling club singer, his pigeon-fancying dad and his young son, when in 2001 I interviewed two of the more prominent members of the collective at Amber’s gloriously time-warped headquarters on Newcastle’s Quayside (offices where the clock seems to have frozen circa 1976). 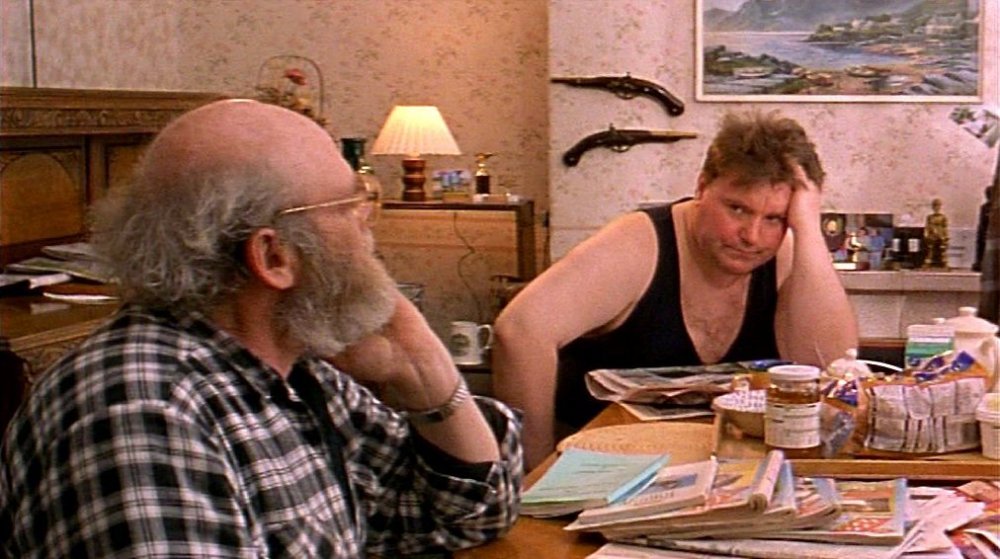 “Initially,” said Ellin (‘Ellie’) Hare, “when Billy Elliot first came out people thought, ‘Oh, great, this is a film about us – it’s about a kid who’s successful and that reflects well on our community because this kid did so well.’ But then when people actually thought about what it was actually saying about the community, what the message was underneath that feel-good factor, it’s saying ‘Get out of here as fast as you possibly can.’”

I asked her husband Murray Martin if he knew of similar collectives elsewhere in the country. “There used to be 20!” he replied. “There were groups in Liverpool, Birmingham, Nottingham, Sheffield. There’s never been one in Manchester – why, I don’t know. It’s one of the mysteries for me that a city of that size has never produced a group, or even an individual, to document that culture. I can’t understand that.” Upon his death aged 64, six years after this interview, Stoke-on-Trent-born Martin was generally recognised as ‘first among equals’ in the perpetually evolving Amber setup. 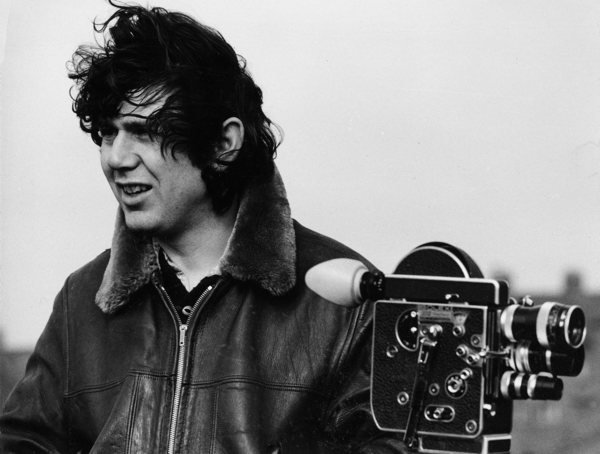 While all of the collective’s works since Seacoal (“Channel 4 wanted a feature film”) are officially credited to ‘Amber Production Team’, Martin and Hare made no bones to me about who’d done what. “If you loved In Fading Light you would also love Eden Valley (1994) and Seacoal, because that’s one strand, and Murray directed all three,” said Hare. “Ellie directed Dream On (1991), The Scar and Like Father,” chipped in Martin.

Issues of credit perhaps explain the lack of wider recognition for Amber’s impressive filmography – more than 50 titles in total, dating back to 1968’s All You Need Is Dynamite, shot shortly after the group’s formation at Regent Street Polytechnic in London (now part of the University of Westminster). Global film culture has always been somewhat uncomfortable about collective credits, and it’s tempting to ponder an alternative reality where Hare/Martin became a kind of British Straub/Huillet – and while that comparison may seem extravagant, it’s salient to note that Amber have never lacked for fervent critical support from august quarters.

Seacoal (which commences with the caption card ‘SUNDERLAND 1984’) won some precursor of the European Film Award at Munich in 1986, judge David Robinson writing in the Times that “even though the group insists there is no dominant creative individual there is evidently a real film genius at work here.” Geoff Andrew, a consistent Amber admirer (“something remarkable… politically sharp Loachian realism”), praised the picture as “intelligent and sensitive. But be warned: the dialect and accents are sometimes impenetrable.” 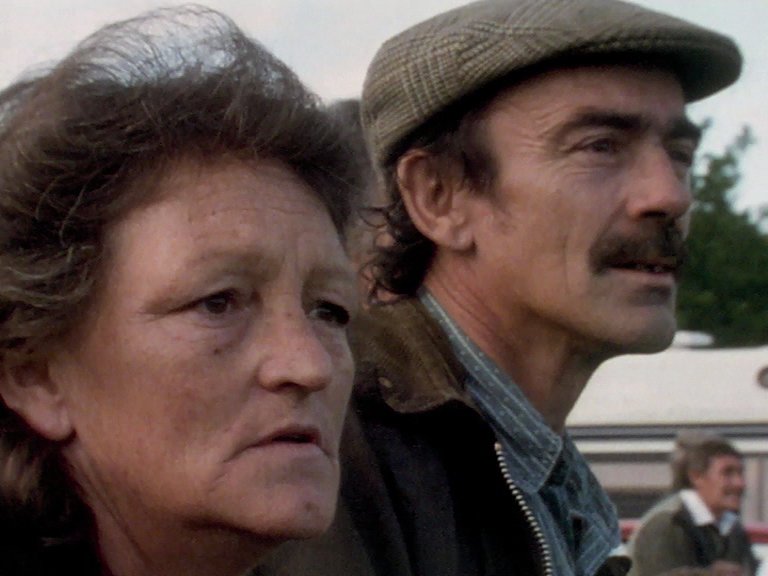 Could the extreme and unapologetic ‘north-easternness’ of Amber’s films perhaps also partly explain their relative obscurity? Amusingly and pointedly, the Seacoal DVD as sold by Amber contains the option of French subtitles but not English ones: “Make a bloody effort”, one can almost hear the grouchily charismatic Martin urging as the seacoalers’ unvarnished Geordie tones clang on outsiders’ tin ears.

No problem for me, of course: one of the joys of (re-)watching the Amber pictures now is hearing exclusively north-eastern terms like ‘gallowa’ (horse), ‘telt’ (told), ‘gan’ (go), ‘brayed’ (hit) and ‘ya bugs’ (untranslatable), as spoken by the team’s familiar rep company of north-eastern actors. Their totemic ‘star’ was former barmaid Betty Hepple – the Ariane Ascaride to Hare/Martin’s Robert Guédiguian, perhaps – who became literally synonymous with the collective when adopting the nom d’ecran Amber Styles. Styles is invariably caught at least once during each feature carefully applying make-up in a mirror and scrutinising her emotion-tautened features in the process, usually alongside a similarly long-suffering female friend. In Amber films, gender solidarity is always a crucial first step to class solidarity – capitalists and bosses are near-invariably cardboard-villainous – and it’s notable that the collective has often been at least 50 per cent female in composition.

Impossible to pretend that all eight features are masterpieces, of course – because while Eden Valley, T Dan Smith and The Scar still considerably punch above their tiny budgetary weight, for all its ribald energy Dream On, which revolves around the travails of a North Shields women’s darts-team, is an especially ungainly combination of grit and magical-realism, as a checklist of (very real) social afflictions – unemployment, bulimia, glue-sniffing, alcoholism, domestic abuse – accumulates across the course of two hours. Dream On may play like an extended pilot for the socially-committed north-eastern soap-opera which Amber have long seemed on the tantalising verge of making, but it nevertheless ‘cleaned up’ at the Newcastle box office – playing at the city’s Odeon for seven weeks and famously outgrossing Oliver Stone’s JFK. 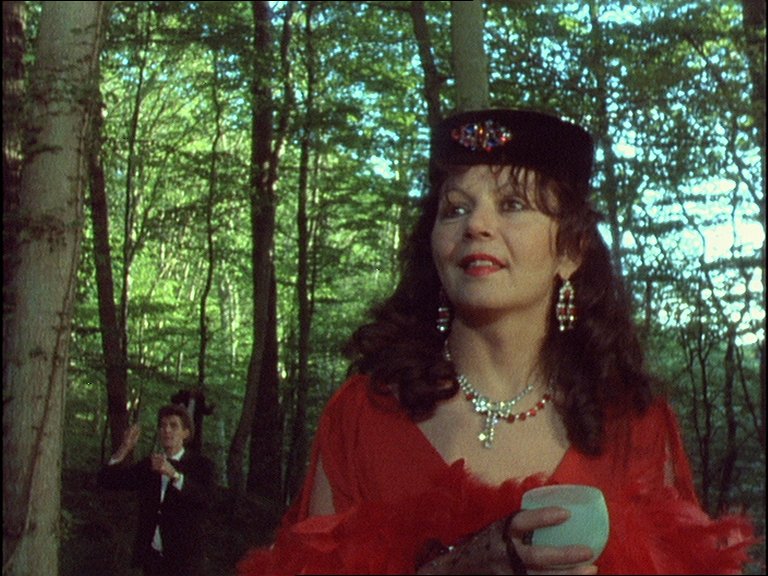 As is often the case in the docudrama genre, the scripted/acted elements of Amber features have generally aged less impressively than the documentary ones, Martin/Hare’s avoidance of wide shots and fondness for extreme closeups contributing to an airlessly telly-ish feel at times. But suddenly we’ll be astonished by, say, the blazing authenticity of Rose Laidler – the hard-faced but sensitively sympathetic seacoaler who also plays a prominent role in another analysis of intergenerational strife, the relatively bucolic Eden Valley. I also speak as a former full-time horse-racing official (1996-2011) when I assess this latter film as the most convincing and in-depth depiction of any equine sport ever committed to celluloid. At their best the Amber pit ponies can, with little apparent effort, make even thoroughbred Frederick Wiseman’s Racetrack look as flat-footed as Garry Ross’s Seabiscuit.

It’s regrettable to realise, then, that the most recent feature from Amber – the DV-shot Shooting Magpies, which obtained little exposure and which, shall we charitably say, doesn’t match up to the intermittent excellence of what went before – was made a full decade ago. Five documentaries have followed, including the upcoming From Us To Them, about changes in the former East Germany (Amber have always been enterprisingly and refreshingly international in scope). 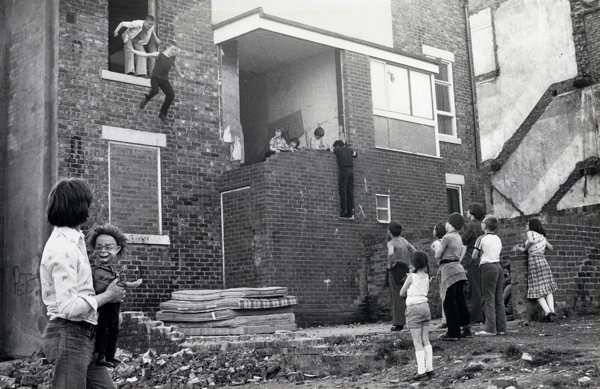 But as the perennially cash-strapped collective tackles the daunting task of digitising, organising and distributing their colossal archives, it would be a significant misfortune for the north-east – and the country as a whole – if their filmmaking ‘arm’ remained so relatively dormant at this particularly challenging historical juncture. As Amber photographer Murtha, herself from a background of poverty and deprivation in South Shields, noted alongside pages of her work in Ten.8 photography magazine, economic policies that deliberately exacerbate social inequalities mean the “squandering of a whole generation of human potential. This is vandalism on a grand scale.” And that was in 1980.

Correction (22 February 2016): This article originally claimed that the late Tish Murtha was from a Wallsend background. Upon advice from her daughter Ella we have amended this to South Shields. 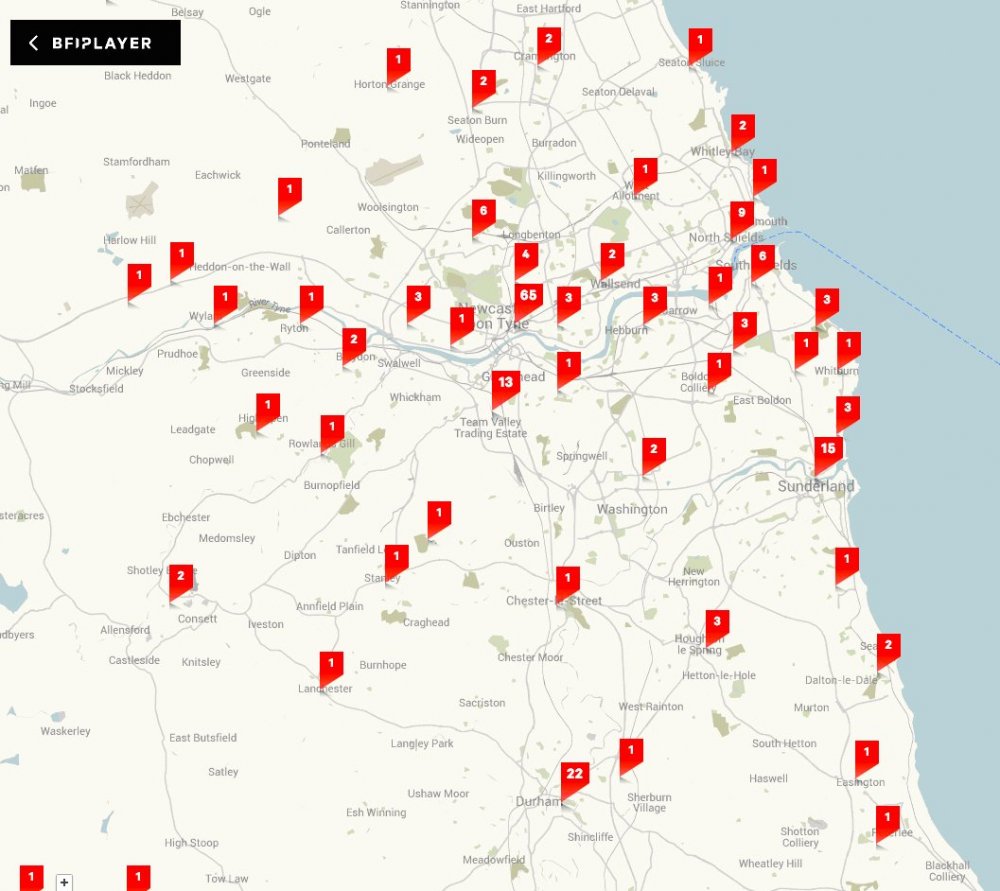 Related to A culture preserved in Amber