Durham Cathedral was the perfect setting for Bill Morrison and Jóhann Jóhannsson’s tribute to the north-east’s colliery glory days. 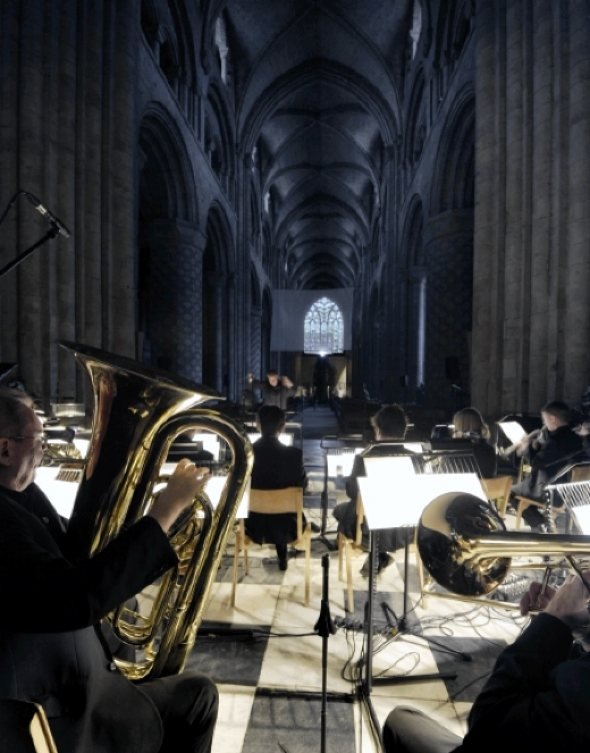 Bill Morrison’s archive collage film The Miners’ Hymns, an elegiac testament to the lost industrial culture of the Durham coalfields, takes in sweeping helicopter shots, lunar-esque landscapes and pitched battles with police cavalry, not to mention the Stygian sights of half-naked termite men hacking blankly away at the underbelly of the earth. It features shades of action movie, industrial noir and zombie sci-fi, but true to the Decasia director’s signature work it’s also a dialogue with the ghosts of the past, those of workers and communities now permanently lain beneath Durham’s remodelled landscape, yet here exhumed on film.

Morrison and his composer, the Icelandic musician Jóhann Jóhannsson [homepage], unveiled the work with two live performances performed by the NASUWT Riverside Band in Durham Cathedral – the spiritual hearth-place for generations of miners whose annual Gala, or ‘Big Meeting’, culminated here. Introducing the show, the bishop described the relationship in reversed terms, coal being, he said, “the one thing in this country as iconic as this building.”

“Live musicians and the cathedral environment change everything,” Morrison had said in a talk before the second night’s performance. “I’m aware it will be all downhill from here.” 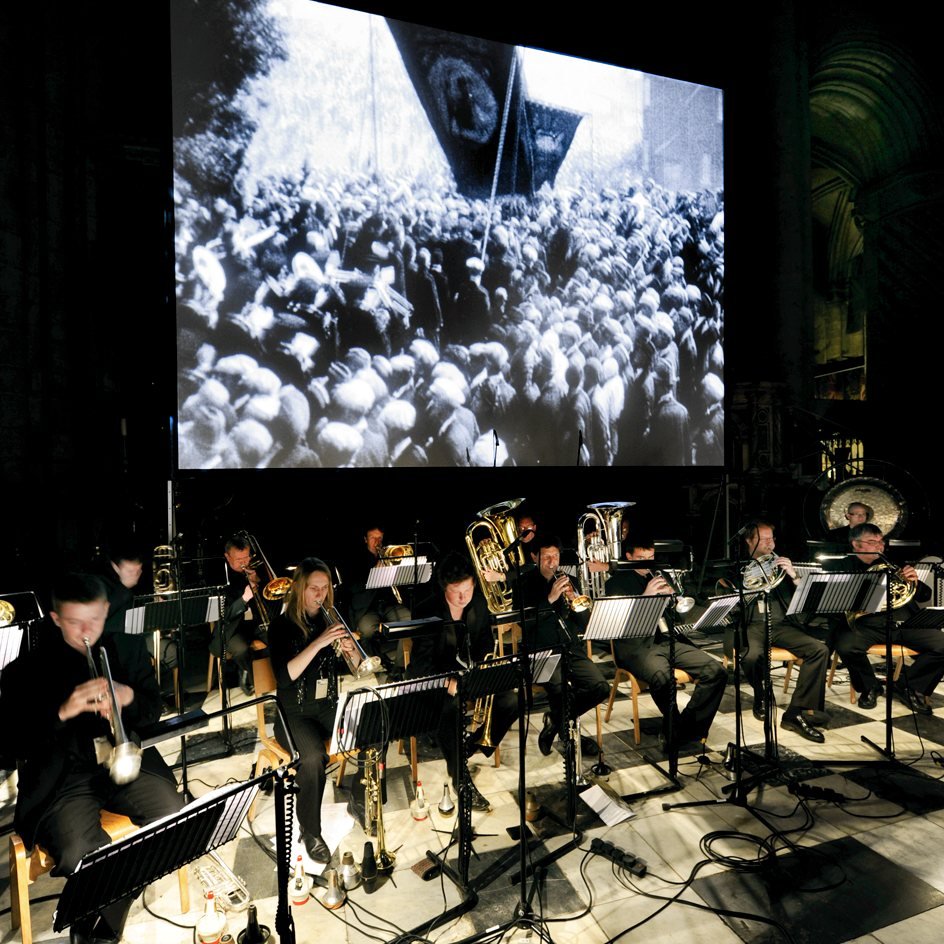 The film started with flyover footage of the present-day coastal landscape, grass fields and business parks covering, the subtitles tell us, the former sites of Ryhope, Silksworth and fellow collieries. A muted cacophony of brass and decaying organ notes accompanied the helicopter’s landing and a fade back in time to a 1960s Gala audience in monochrome: a study of studious faces, hints of modernity (two young women in sunglasses) punctuating the sea of flat caps.

Then the earth opened up – hard-boiled men in hard hats descended to work the underworld – and the brass rumbled and roared. Pick-axes were swung, pistons pumped, colossal drill-bits churned. White horses emerged from the gloom, to be succeeded by trolley carts and conveyor belts ferrying charcoal lava flows. The blacks in these restored film fragments were truly Orphean; some of the original camerawork was astonishingly dynamic: low-angles on the workers, shots of oncoming trolley carts, or from inside them, travelling with the coal.

Back on the surface, black waves lapped at a beach full of sea coal. Hands, spades, sacks, cages and a huge digger took turns to collect the debris; kids slid down otherworldly mountains of anthracite on the shore. The film followed them to their tenement homes, to Durham’s flat rows of roofs and washing lines. Early of a morning down the high street, police began diligently unpacking crowd barriers, as the musicians took up a stately, plaintive fugue. As it swelled, miners’ buses began to arrive: suddenly we were in a riot of falling visors, rising shields, flying batons and hooves. 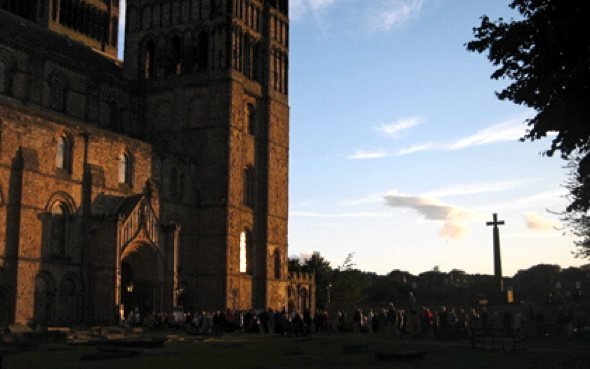 Durham Cathedral hosting the premiere of The Miners’ Hymns

The turmoil was hard and fast, after which the film retreated to the air again, to colour and the present-day: helicopter shots of the former Hylton Colliery, now a business park, and the former Monkwearmouth, now Sunderland’s Stadium of Light.

Morrison had spoken in his talk about the effect of assembling archive footage from multiple eras. Showing decade after decade of kids playing or people marching, he suggested, led a film away from politics towards sociology; it became a tribute to the way people lived. He also discussed how audiences seemed to bring to live shows less expectation of being told a narrative.

All the same, after we’d seen the state mete out its apparently archetypal violence to more than one generation of miners, it became apparent how much better this community had been honoured by their spiritual authorities. The film climaxed with a montage of Big Meetings, crowds thronging Durham’s streets and spilling out of windows, colliery bands wending their way to the Cathedral behind banners as big and ornate as stained-glass windows, drums pounding on- and off-screen, the soundtrack building to a fanfare as the procession swept into the very building where we were watching it. Past and present dovetailed in a moving if fleeting communion, as if to ask: thus the mining culture; what now?