This year’s London Film Festival brought archive films up onto the streets, and the Tube back onto the screen. We caught two of the festival’s archive showcases. 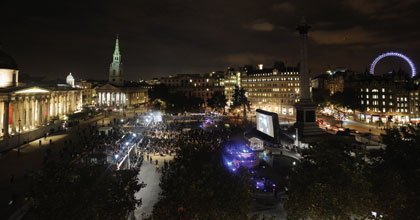 The town-square screening is fast becoming a mainstay of any self-respecting film festival – in Locarno and Bologna it’s a nightly centrepiece – but few cities can furnish as prestigious a setting as Trafalgar Square. For the last three years the London Film Festival has found a way to match the historical architecture – indeed, to add an extra dimension to it – by screening vintage images of the changing city on a giant screen at the foot of Nelson’s column. Free themed programmes of films from the vaults (London Thrills Me, London Loves) draw a crowd big enough to fill the biggest old picture palace – this year an estimated 4,000 – to witness how the capital has morphed in the hundred-plus years since the dawn of the Film Age. This year’s motif was transport – ‘London Moves Me’ – with the silents component again accompanied by top ivory-tickler Neil Brand.

It’s a truism that the movies love movement – not only do they embody it, they’re built on it, from the wheels of the projector to the rail-lines of the celluloid. If the Lumières happened to record the locomotion of London passing through their scenes of Marble Arch, Piccadilly Circus, The Entrance to Hyde Park and Westminster Bridge (all 1896), some of the other pioneers of actualities and scenics – R.W. Paul, Charles Goodwin Norton, W.K.L. Dickson – explicitly defined the city by its traffic in the likes of Hyde Park Cycling Scene (1900), Horse Drawn Traffic in Euston Road (1899) and Panorama of Ealing from a Moving Tram (1901). The latter travelogue breezes through a genteel Ealing, bicycles wending under leafy trees, Union Jacks flying proud; in comparison, Charles Goodwin Norton’s Horse Drawn Traffic in Seven Sisters Rd (1898) makes the dusty north-east turnpike look like a wild-western frontier town.

London’s waterways were once busy ferrying movie cameraman left and right. The Topical Film Company’s Tower Bridge Boats on Thames (1905) shows the Edwardian industrial bustle on and over the river; twenty years later and the final, London pit-stop of Claude Friese-Greene’s British travelogue The Open Road (1925) shows perhaps more belching smokestacks on the river – and certainly more motors on the road – but Friese-Greene’s two-tone colour process seems to confer upon the red-liveried steamers and buses an imperial right of way. Down on Clapham Common, however, Topical’s Paddle Your Own Canoe (1922) shows the ruthless Georgian exploitation of Clapham’s youngest for pedal-boat fodder.

Barging Through London (1924), a travelogue along Regent’s Canal, pops up for street air at every lock stop between Limehouse and Paddington Basin. Picturesque, but time ticks faster and movies, like commuters, must get to the point; witness the television newsreel Thames Water Bus Service Opens (1948), trumpeting the new river route from Charing Cross to Tower Bridge, or London Transport’s Cinegazette Number 8 (1950), reporting on the decommissioning and destruction of London’s tram circuit in preference for the (apparently self-evidently) more progressive bus option. The narrator seems confident that this is for a brighter future, but as tram rails are buried in concrete and the trams themselves felled, gutted and torched, the film strikes an inadvertently mournful tone.

Two newsreel shorts on the ill-fated 1930 launch of the Air Ministry’s R101 airship – Britain’s Million Pound Monster, as one title has it, which subsequently crashed in France – came similarly clouded by hindsight. (“How Money Flies!”, quips one of the captions, a year into the Great Depression.) The programme came quickly back down to earth with the Ministry of Information’s potted WWII docudrama Mobile Canteen.

London offers little manna to the road movie, and in a fitting affirmation of public space, London Moves Me showed few portraits of the movie car – perhaps only the brief Motoring Jubilee (1956). (Imagine the shape of a comparable American programme – ‘Los Angeles Moves Me’, say.) Besides the Thames itself, it was inevitably the Tube that figured most prominently. The amateur footage of Scenes at Piccadilly Circus and Hyde Park Corner Underground Stations (1931) mapped out stations that looked much as I remember them 50 years later, before catching a ride between the two; there was something magical about the silent, monochrome bobbing of passengers’ heads in the carriage.

Under Night Streets (1958) showed the work of the small army who maintain the Tube by night: teams lugging up 100 yards of old rail at a time; imps in surrealist air masks sweeping the ashes from ventilation shafts. Back at the shopfront, the informational Automatic Fare Collection and You (1969), with its Day-Glo graphics and soft-jazz muzak, was London Transport’s own swinging contribution to the spirit of the 1960s. The new Tube ticket barriers weren’t quite offering free love, but perhaps the next best thing.

Finally, far from the madding commute, there was Douglas Hickox’s whimsical mock-Jacques Demy musical Les Bicyclettes de Belsize (1969), whistling in the wind around Hampstead at dawn, and Yohan Forbes’ skateboarding travelogue Project One (2009), skimming the riverside concrete from the Thames Barrier to the South Bank. Further forms of transport to explore next year: sedan, rickshaw, water-skis, pogo-stick, Sinclair C5. 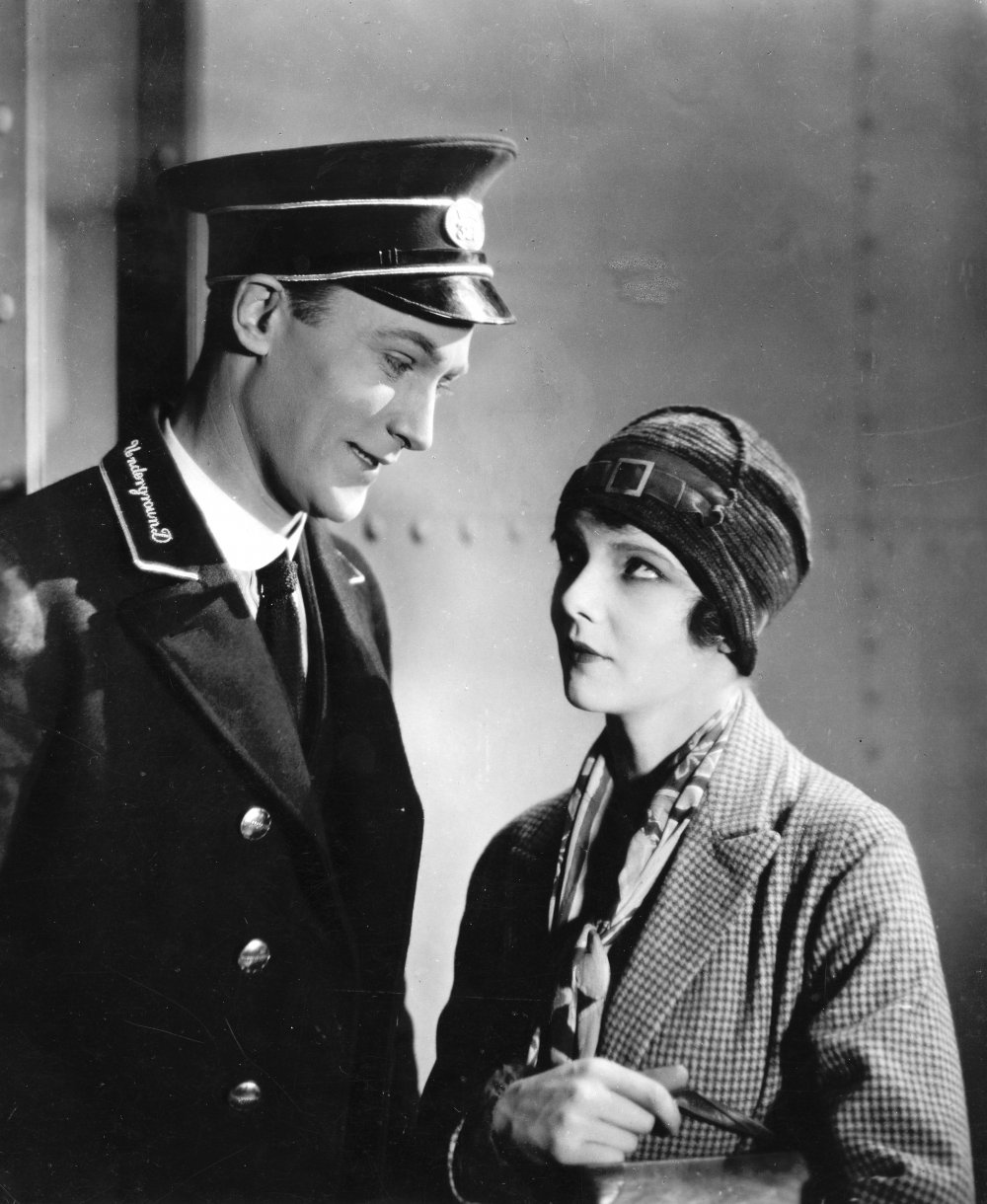 Could there have been a more appropriate film for this year’s Archive Gala than the 1928 British silent Underground, here in a world premiere of a major new restoration by the BFI? Anthony Asquith’s debut feature as a solo director is a fascinating window onto the London of times past, as well as being one of the most significant British silent films, full of expressionistic flourishes and debts to Soviet montage that should further silence those who still cling to the outdated notion that British cinema of the period was inward-looking and unambitious.

The film tells an age-old tale of jealousy and treachery in a love-triangle between four working-class, everyday Londoners: Bill, a tube-worker and all round decent fellow; Nell, a young shop-worker whom Bill falls for; Bert, a factory-worker, pub braggart and selfish womaniser who competes with Bill for Nell’s affections; and ill-fated Kate, whom Bert enlists to entrap Bill by falsely accusing him of attacking her, so ruining Bill’s reputation and leaving Bert free to marry Nell.

The real fascination, though, is in glimpsing the milieu of 1920s London in which the story plays out. The Tube is really the central character, carrying the characters and us from place to place in a London that’s at once vanished and uncannily familiar despite the distance of 80 years. The pubs in Underground may be rougher and smokier, but in the faces of the young men propping up the bar you could see their great-grandsons today. These were unmistakably the faces of Londoners. Look closely enough, it seemed, and you might even see yourself jostling through the crowds filing up and down the tube escalators.

Then, as today, the Tube was a great leveller in London life, with all classes squeezed together as they are in few other places. Underground has a fascinating documentary quality from its opening shot, filmed from a camera mounted on the front of a Tube train as it pulls into Waterloo station, the platform as dangerously crowded with commuters then as it is today.

It was especially apt that the gala screening was held at the Queen Elizabeth Hall, on the South Bank, yards from Waterloo. As the BFI’s Head Curator Robin Baker remarked in his informative, humorous introduction, we might all pause to think of such histories as we made our way home through the station later that evening. 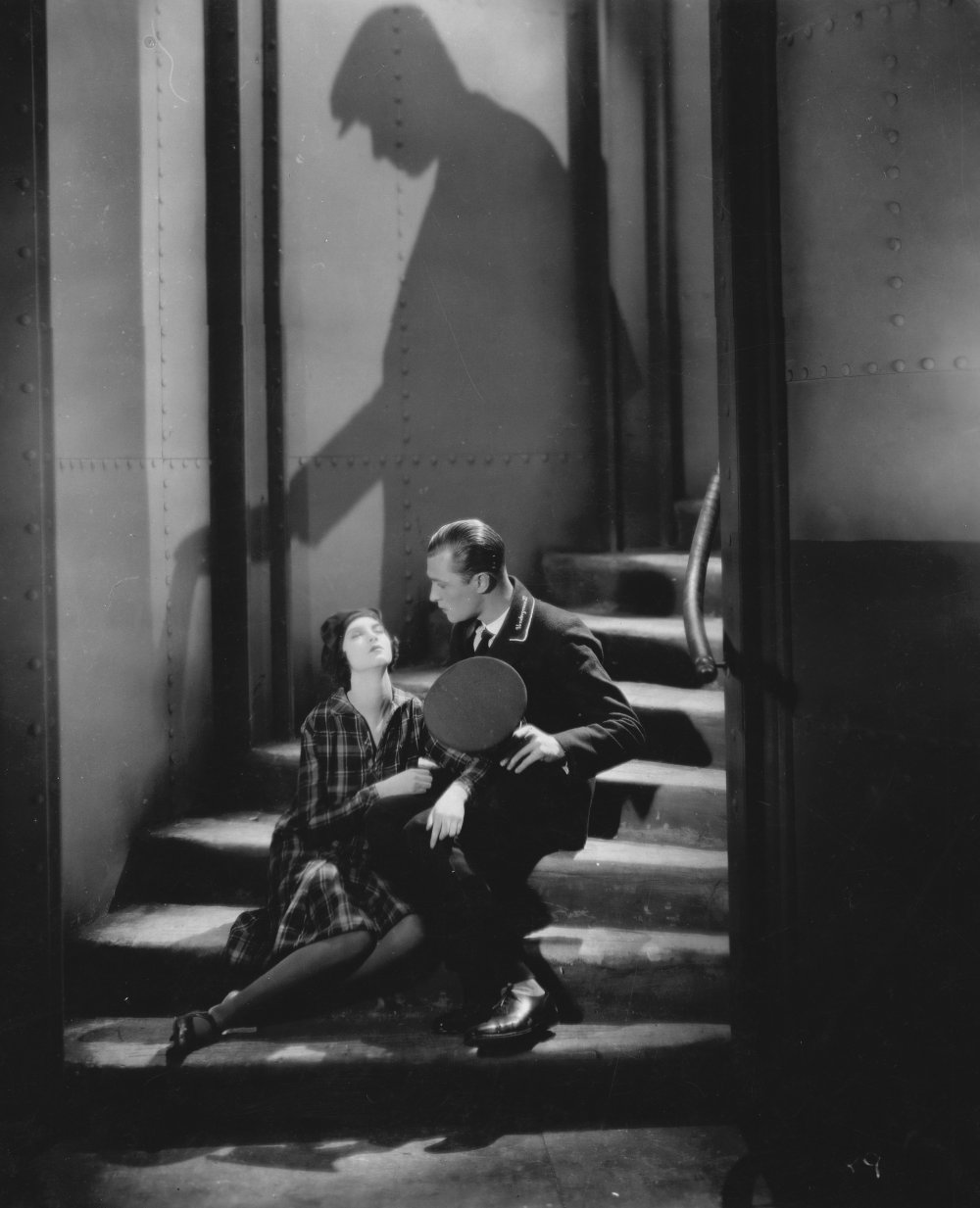 Baker’s introduction ran through some of the problems that had faced the restoration team while working on the film. The nitrate copy in the BFI National Archive was so badly damaged, he claimed, that it was almost impossible to appreciate the film itself. It wasn’t until the advent of recent digital restoration techniques that it was felt justice could be done to the film through a mix of those and photo-chemical work. Baker screened some ‘before and after’ clips that showed just how much work was needed to repair the scratches, remove rogue hairs and other objects and eliminate solarisation (“These characters may look like they’ve just eaten a bowl of Ready Brek or swallowed Uranium”, he joked of one particularly bad example).

Though we were warned not to expect miracles, the final results were quite astonishing. The film now flowed, its melodramatic story thoroughly absorbing. One segment that had apparently been particularly badly damaged was the final chase sequence over the roof of the Lots Road power station in Chelsea (a sequence which boasts some wonderful rooftop shots of pre-Blitz London, looking out over a Thames crowded with tug-boats and industry). In the new restoration it’s again a thrilling action set-piece.

The Queen Elizabeth Hall screening was made more special by a perfectly judged new score composed by Neil Brand, and played by him and the Prima Vista Social Club, an improvising group of four musicians from Italy and Germany with a long history of accompanying silent films at events such as the Pordenone festival in Italy. Brand’s score reminded everyone of the excitement that such a ‘live’ aspect brings to such screenings, as it conveyed and matched the romance and pace of the film, caught the characters perfectly, and made space for witty direct references to particular scenes, as when a harmonica-playing young Londoner interrupts Bill and Nell on a romantic riverside picnic. Brand rightly received a long ovation at the film’s end.

The BFI hopes to screen the film at next year’s silent film festival in Bologna, with Brand again providing the score (there are hopes he will perform with a full orchestra), to be followed by UK cinema screenings and a DVD release next summer.