The making of 2001: A Space Odyssey – Christopher Frayling on the history of Kubrick’s groundbreaking production design, and David Robinson on the set of the film.

In print and digital from 31 October. 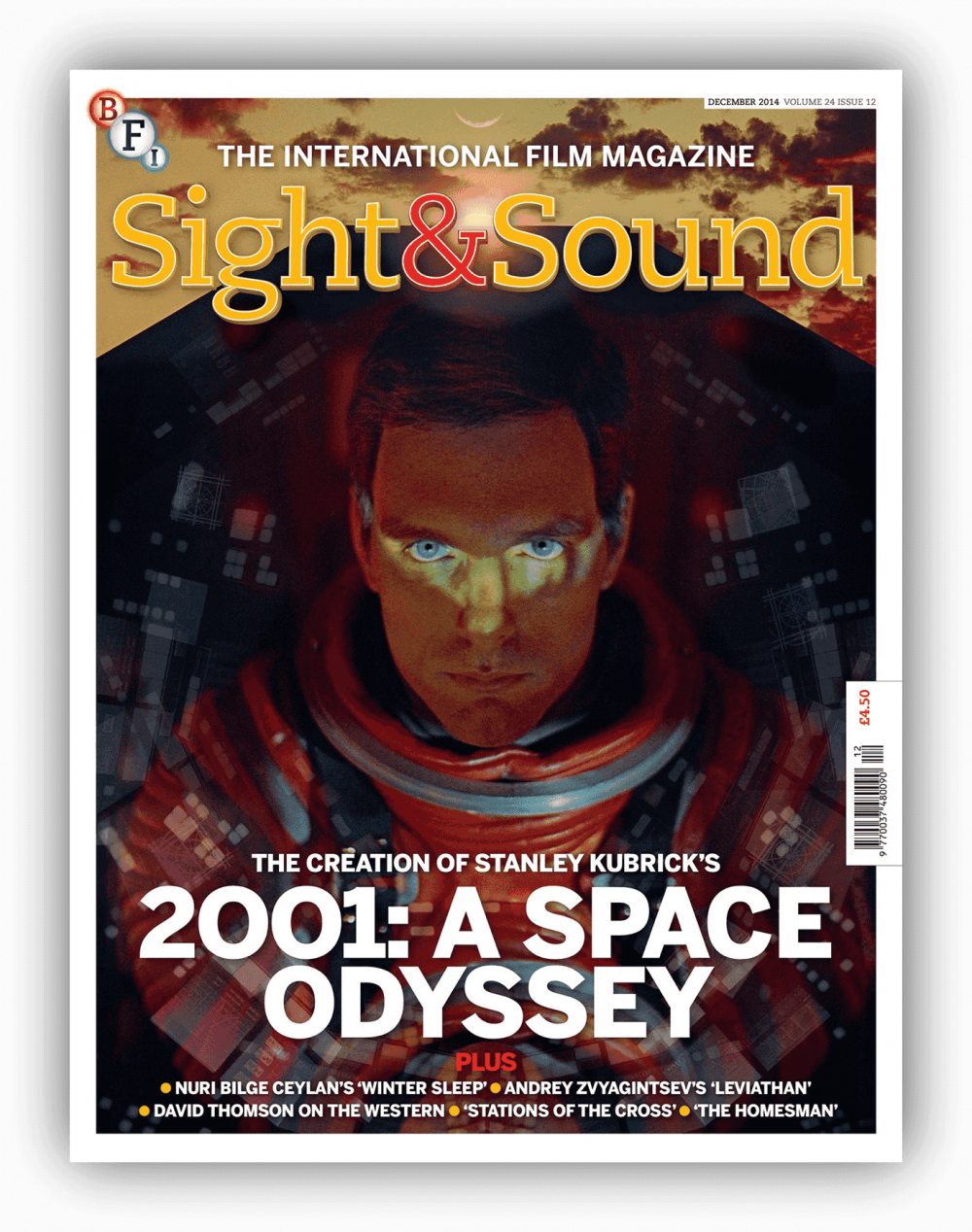 This month we go back to a onetime future now passed – at least datewise – to 2001: A Space Odyssey and the wonderful technical and aesthetic achievements of Stanley Kubrick’s groundbreaking science-fiction epic. Deftly unpicking the film’s complex production-design history, Christopher Frayling notes that Kubrick’s first choice Ken Adam declined, bemoaning that with “all kinds of research at your disposal… there would not be any room left for my imagination”. What a missed opportunity? In a visit to the set made in 1966 for Sight & Sound, David Robinson recalls sharply that, “Kubrick at work on his stages has rather the air of a David embattled with several Goliaths… Sometimes the machines seem to be getting the upper hand.”

The big auteur beasts of the summer’s Cannes Film Festival – Palme d’Or winner Nuri Bilge Ceylan and Best Screenplay winner Andrey Zvyagintsev – see their films reach UK shores, perhaps to battle it out with one another. After all, both are ambitious epics of considerable length and scope with a distinctly Russian flavour (even if Ceylan’s film is Turkish).

“I really wanted some of the conversations to feel long,” says Ceylan in his interview with Geoff Andrew about Winter Sleep, his distinctly Chekhovian study of a retired actor who now owns a remote hotel that he shares with his much younger wife and embittered sister. Andrew calls the film “a piercingly astute, often affectionately witty study in pride, vanity, insecurity and self-deception.”

Ian Christie’s view of Zvaygintsev’s Leviathan, the tale of a rural struggle between the owner of a wooden house that’s been in his family for generations and the local mayor who intends to demolish it, is that “the tightly wound plot shows just how terrifyingly anarchic the farthest corners of Russia can be today.”

In wondering about the illustrious line that joins Howard Hawks’s Red River to Tommy Lee Jones’s new release western The Homesman, David Thomson admits his chief problem with today’s film students is, “How can I expect them to see Red River or the other [Hawks] films through the eyes of 1976 or 1948?” The western, he continues, “needs to benefit from a new historical awareness… where honour and a free market are under pressures we know today.”

Looking back from the perspective of Dietrich Brüggemann’s Stations of the Cross, Catherine Wheatley contends that “Over the last decade a slow but regular supply of European films has cast a cool gaze upon Christianity and its adherents.” Wheatley’s dissection of the connecting how and why of films like Into Great Silence, Lourdes, Hadewijch, Of Gods and Men, Corpo Celeste, Calvary, Ida and others is as elegant and pithy an analysis as you’d care to find.

We are delighted also to showcase in interview Steve James’s tribute documentary Life Itself, about the great popular American film critic Roger Ebert, a man who was constantly reinventing himself as the age reinvented his surroundings.

COVER FEATURE: The creation of 2001: A Space Odyssey

Stanley Kubrick was determined the design for his “definitive attempt” at the science-fiction film should represent a decisive break with Hollywood norms – and who better to enlist to his cause than a pair of spacecraft consultants poached from the very heart of NASA itself? By Christopher Frayling.

Plus: David and his goliaths

In this extract from an essay in Sight & Sound in spring 1966, Two for the sci-fi, David Robinson describes Kubrick’s tireless perfectionism, which he observed during a visit to the set of 2001: A Space Odyssey.

Leviathan, Andrey Zvyagintsev’s tense drama about a man struggling to save his family home from a tyrannical mayor in a village on the Barents Sea, offers a savage portrait of the corruption and lawlessness endemic in contemporary Russian society. By Ian Christie.

With echoes of Shakespeare, Chekhov and Bergman, Nuri Bilge Ceylan’s Winter Sleep is a claustrophobic, psychologically acute chamber drama exploring the self-delusions and failed relationships of a proud, vain hotelier in an isolated region of Turkey. By Geoff Andrew.

It’s impossible now to watch an old-fashioned western like Howard Hawks’s Red River or Rio Bravo with the same eyes we did in, say, the 1970s or even the late 40s, but their influence on the cultural landscape still colours the way we receive modern counterparts like The Homesman. By David Thomson.

Dreams of a life

Steve James’s Life Itself is an infectiously warm account of the career of the late Pulitzer prize-winning US film critic Roger Ebert, charting his near 50-year relationship with the Chicago Sun-Times, his pioneering work on television and his enthusiastic late-life conversion to blogging. By Nick Bradshaw.

Stations of the Cross, Dietrich Brüggemann’s exploration of a teenage girl’s growing religious fanaticism, is the latest in a string of films exploring Christianity and its adherents – a trend that hints at a wider cultural and spiritual disquiet at the heart of the contemporary world. By Catherine Wheatley.

In the frame: The house that Jacques built

Jacques Lagrange’s set designs were more than mere adornment for Jacques Tati – they were central to how he constructed his gags. By Isabel Stevens.

Object lesson: Too clever by half

As the ‘smart bomb’ in John Carpenter’s Dark Star demonstrates, nothing is more explosive than the ability to think. By Hannah McGill.

Not everything they teach at film school should be practical. How about a little Edmund Burke or nude figure drawing instead? By Mark Cousins.

How the man behind the Harry Potter films gave another beloved children’s character a screen makeover. By Charles Gant.

Omer Fast is the latest artist to move into feature filmmaking, with an adaptation of Tom McCarthy’s cult novel Remainder. By Kieron Corless.

In 40 Days of Silence, an Uzbek girl’s vow not to speak is underwritten by a bold experimental score that eschews tradition and nature. By Frances Morgan.

Pedro Costa’s first fiction feature since 2006 is just one of the assaults on cinematic convention found in Toronto’s Wavelengths strand. By Jason Anderson.

Alexander and the Terrible, Horrible, No Good, Very Bad Day
Annabelle
Bang Bang!
Björk: Biophilia Live
Black Butler
The Book of Life
The Case Against 8
Citizenfour
Dracula Untold
The Drop
Fury
Giovanni’s Island
Going Away
The Great Museum
Haider
Hockney
Honeymoon
I Am Ali
The Imitation Game
Leviathan
Life Itself
Luna
Mary Is Happy, Mary Is Happy.
My Old Lady
The Necessary Death of Charlie Countryman
Night Train to Lisbon
No Good Deed
The November Man
The Possibilities Are Endless
The Remaining
The Rewrite
Say When
Serena
Set Fire to the Stars
The Skeleton Twins
Stations of the Cross
Third Person
This Is Where I Leave You
What We Do in the Shadows
Winter Sleep

A new box-set makes a persuasive case for placing Polish director Walerian Borowczyk in the pantheon of filmmaking greats. Reviewed by Kim Newman.

One of the masters of 20th-century illusionism, Karel Zeman has had a profound influence on the fantasy cinema of today. Reviewed by Nick Bradshaw.

The Driver’s Seat (aka Identikit)

The circus surrounding Elizabeth Taylor’s private life overshadowed one of the boldest performances of her career. Reviewed by Simon McCallum.