If you look to short films for a fresher way of seeing, these seven highlights of Bristol’s Encounters festival should sluice your eyes. 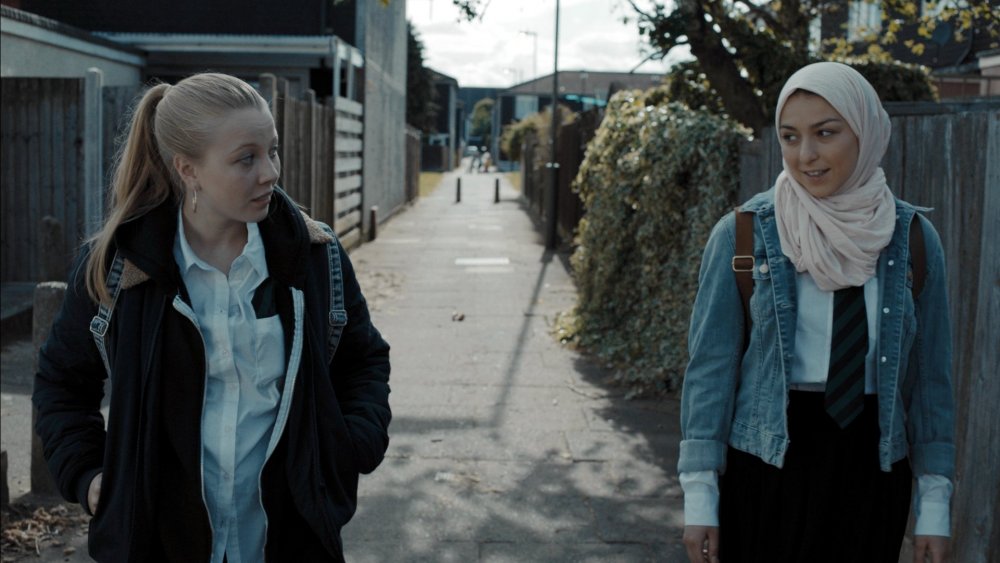 Amos Vogel, towering more sternly over current film criticism with each passing hour, detected the wind changing in 1970 when he characterised the arriving films of Central Europe and Asia as being “intent on explorations rather than solutions”. He meant, not disapprovingly, that there was no automatic friction between a film’s leftist credentials and the impulse to deal in atmosphere before answers. It mattered more that the primary emotion be “disaffiliation, voluntary separation from the dominant values of the respective Establishments”.

The 22nd Encounters Short Film and Animation Festival runs 20-25 September 2016 at the Watershed and Arnolfini, Bristol.

Today, when anyone separating from the dominant values of the Establishment is volunteering for poverty row, some actual answers might not go amiss. And if the mainstream seems reticent, then short films and the festivals showing them remain more inclined to take a shot. One example, Bristol’s Encounters Short Film and Animation Festival, arrives this week at its 22nd annual iteration, with a live-action programme in which conventional narratives have their place, but the mutant strains of disaffiliation lurk just under the skin.

The tendency of plot-driven narrative fiction to deal in urban misery is a long-standing vexation in films of any length, and certain themes (domestic strife, parental friction, hooliganism, all that jazz) have a magnetic pull that confuses atmosphere and answers almost terminally. This bond will take some active breaking – nothing new this year from Fyzal Boulifa, whose films like Burn My Body and Rate Me are an ongoing stress test of the attachment (though Burn My Body is screening in a retrospective programme) – but in the meantime there’s room for Toby Fell-Holden’s Balcony to depict interracial same-sex attraction with due ambiguity, rather than rawness for the sake of it. The familiarity of the estate environment is hard to shake, but the film has an uncomfortable point about the impenetrable minds of perfectly normal people.

Short-form documentaries know a little about that sort of thing too. Camrex, Mark Chapman’s mosaic of the men in Sunderland’s Camrex House hostel, peers hard at the male human animal, avoiding talking heads in favour of scrutinising worn skin and bodies, cracked masonry and busted brickwork. It knits together the lives of the residents and the exterior building itself, revealing Chapman’s equal interest in still photography as a means to bottle the world; an enquiry into the interior mind, viewed from a range of six inches.

9 Days: From My Window in Aleppo

External war stories bubble up in 9 Days: From My Window in Aleppo, recording events going on in the street below Syrian photographer Issa Touma’s apartment during August 2012 and edited into shape by Floor van der Meulen and Thomas Vroege. No less authentic war reportage than anything on the BBC, it catches a country’s upheavals in perfect microcosm. Groups of young men argue about President Bashar al-Assad and build makeshift barricades, seen from Touma’s disconcertingly canted perspective high above while he risks opening a window to water the plants. “My street seems to be part of the front line,” he notes resignedly. Eventually the authentic fighters turn up, heavily armed and scary, but most of the participants look like college kids, diverting the course of history in branded sportswear. They have no war experience and no eye on the global horizon, yet there they are. Perhaps a couple of them are not dead.

9 Days: From My Window in Aleppo trailer

Poetry ultimately trumps prose, in wartime and peace. The undemonstrative I’ll Fly Higher by Isabel Lamberti follows two young brothers on a meandering walk through a dusty, almost empty area of south Madrid where it seems no car has ever stopped, a landscape of carriageways and overpasses. They chat, pass the time, skim discarded Playboy magazines, and skirt the fringes of the urban on a youthful dérive whose prosaic purpose is obliquely revealed. Happy enough they may be, but the future looks a long way off.

Experimental film always has most to say about the future. Encounters is showing Three Dimensions of Time by Pim Zwier, who filmed the same vistas at three different times through three colour filters and then overlaid them to run simultaneously, so that the outlines of ghostly trains, cars and cats wander past as primary coloured wracks, while the natural world goes on oblivious in the background. Eventually ordinary people splinter into similar shades, taking on a disconcerting aura of menace – but then everywhere has ghosts. The result is also oddly reminiscent of John Smith’s The Man Phoning Mum, which overlaid two sequences filmed on the same street 35 years apart, to more comic effect. 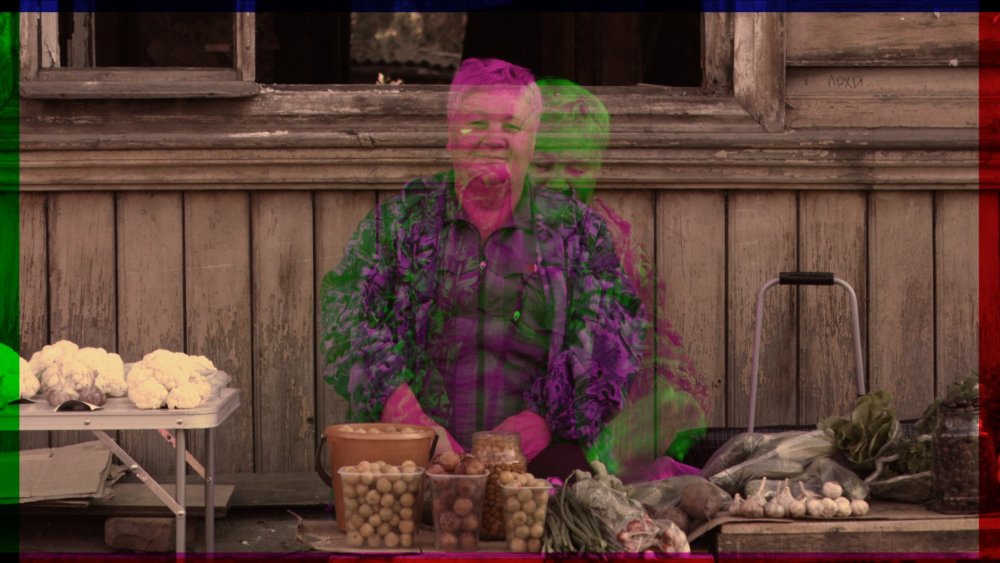 Smith, an Encounters regular, has a typically puckish new film in the festival too: Steve Hates Fish, recording what happens when you deliberately confuse a smartphone translation app by giving it English words to look at and telling it they are French. Thrashing around hopelessly in its dictionary, the app’s stabs in the dark replace words on shopfronts and displays with some very wayward guesswork, before it faints completely and enters They Live territory, planting spurious nouns and verbs on blank concrete walls and pavements. The empire of signs is overthrown, its language of control scrambled beyond repair. How much more disaffiliation do you need? 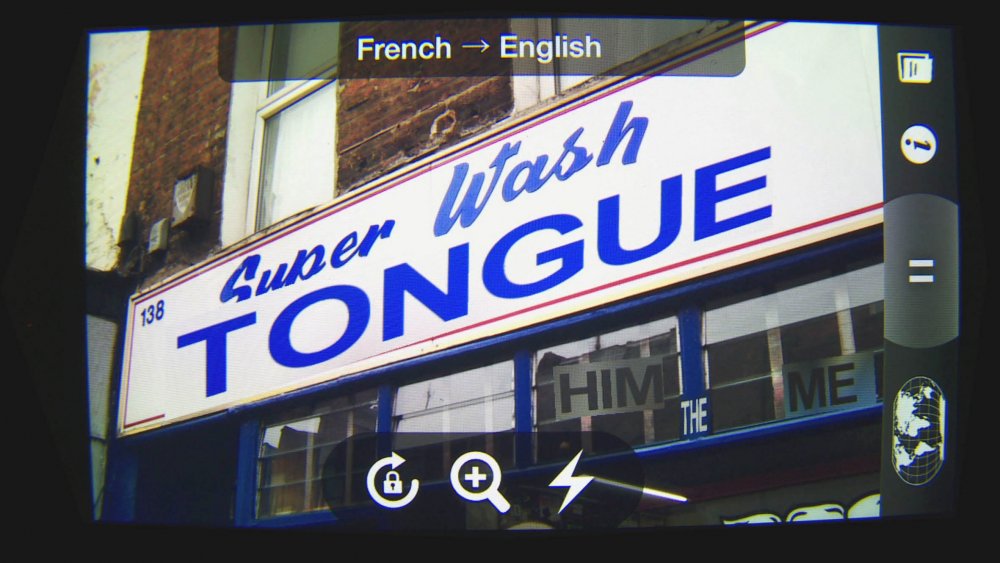 The Reflection of Power

Actual overthrow occurs in The Reflection of Power, when Mihai Grecu manipulates footage to show North Korea steadily disappearing beneath rising flood waters, its leaders and population carrying on regardless, or perhaps just oblivious. Happy communal effort goes down like Atlantis, until the tips of totalitarian architecture poke above the waterline. As a comment on a political system driving down a cul-de-sac it’s as subtle as a brick, but without giving in to triumphalism or even much cynicism. It fulfils another of Vogel’s criteria: instead of a happy end, gestures of mature pessimism, a despair from which springs a possibility. For that kind of thing, the laboratories where short films hatch are still the best places to look.

The Reflection of Power trailer