Thirty years ago, explosive body parts were what the directors of Alien and Scanners had in common. But while Ridley Scott reaches for the stars with his ‘origin of everything’ epic Prometheus, David Cronenberg has gone the other way, shrinking his universe to the inside of a limousine in Cosmopolis.

The latter was a star attraction – and one of a cavalcade of auto-themed works – at this years Cannes Film Festival, from which our editor Nick James and Geoff Andrew report. And while that round-up looks forward to 20 films that’ll be coming the way of our arthouse screens over the next 12 months, we’re also looking back this month: over the careers of the late, great Japanese director Shindo Kaneto and the redoubtable Hollywood comedienne Shirley MacLaine, to Hugh Hudson’s 1980s epic Revolution and to the greatest of all British silents, Hitchcock’s Blackmail.

On newsstands 12 June. Subscribe and get a free BFI DVD! 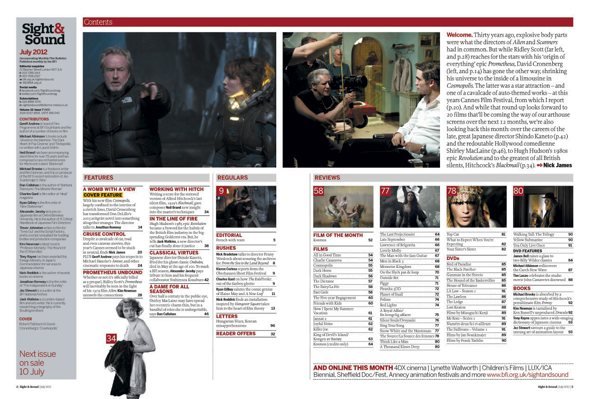 Cover feature: A womb with a view

With his new film Cosmopolis, largely confined to the interior of a stretch limo, David Cronenberg has transformed Don DeLillo’s 2003 zeitgeist novel into something altogether stranger. The director talks to Jonathan Romney.

Despite a cavalcade of car, road and even caravan movies, this year’s Cannes seemed to be stuck in neutral, finds Nick James.

+ Geoff Andrew pays his respects to Michael Haneke’s Amour, and other cinematic responses to death.

Whether or not it’s officially billed as a prequel, Ridley Scott’s Prometheus will inevitably be seen in the light of his 1979 film Alien. Kim Newman unravels the connections.

In the line of fire

Hugh Hudson’s 1985 epic Revolution became a byword for the hubris of the British film industry in the big-spending Goldcrest era. But, he tells Jack Watkins, a new director’s cut has finally done it justice.

Japanese director Shindo Kaneto, fêted for his ghost classic Onibaba, died in May at the age of 100. To mark a BFI season, Alexander Jacoby pays tribute to him and his frequent collaborator Yoshimura Kozaburo.

A dame for all seasons

Over half a century in the public eye, Shirley MacLaine may have spread her eccentric charm thin, but in a handful of roles she is unforgettable, says Dan Callahan. 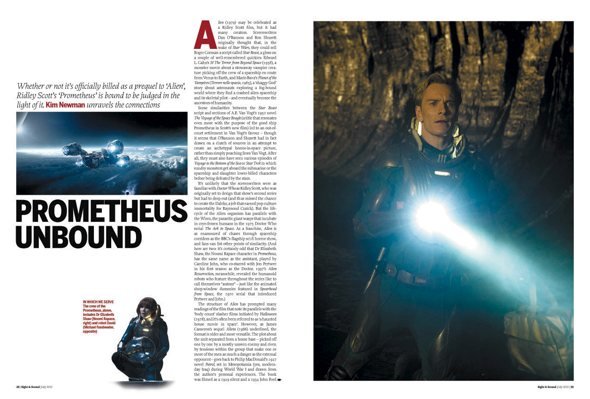 Nick Bradshaw talks to director Penny Woolcock about scouring the archives for From the Sea to the Land Beyond.

Charles Gant on how The Raid broke out of the fanboy ghetto.

Ryan Gilbey salutes the comic genius of Elaine May and A New Leaf.

Nick Roddick finds an installation inspired by Hangover Square takes him to the heart of film theory.

Film of the month

With its enigmatic tale of a stranger shaking up a small town on the fringes of Turkey, Kosmos confirms Reha Erdem as a director of mysterious vision, whose characters move beyond language. By Trevor Johnston. 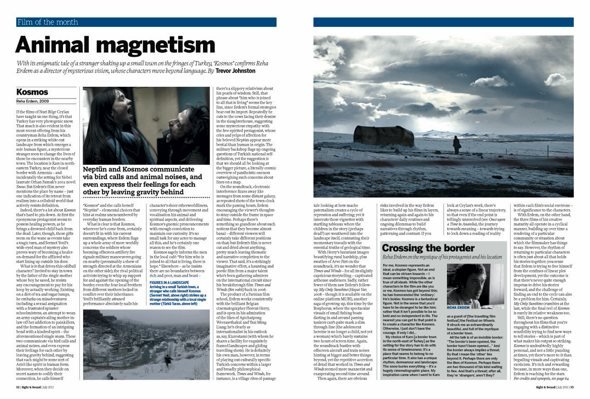 Michael Brooke is absorbed by a comprehensive study of Hitchcock’s penultimate film Frenzy.

Jez Stewart savours a guide to the unsung art of animation layout.

Cinema releases reviewed in this issue

DVDs reviewed in this issue

Bird of Paradise
The Black Panther
Gunman in the Streets
The Hound of the Baskervilles
House of Tolerance
LA Law – Season 1
The Lawless
The Ledge
Lost Keaton
Films by Mizoguchi Kenji
Mr Rose – Series 1
Numéro deux/Ici et ailleurs
The Sullivans – Volume 1 91
Films by Jan Svankmajer
Films by Frank Tashlin
Walking Tall: The Trilogy
Yellow Submarine
You Only Live Once