Lost and found: A New Leaf

Elaine May’s 1971 black comedy may have been butchered by the studio, but the end result is still glorious.

☞ Update: A New Leaf is now available on DVD and Blu-ray from Eureka Masters of Cinema 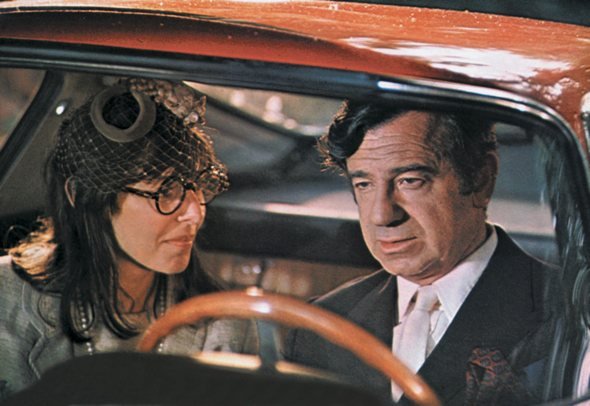 Elaine May is nobody’s idea of obscure. This birdlike woman, now 80 years old, began pecking away at American mores in the 1950s as part of a hip, witty double act with Mike Nichols. The duo released bestselling albums of their routines and played a year-long, sellout run on Broadway. May later directed four movies, three of which she also wrote, as well as scripting many others, some credited (The Birdcage and Primary Colors for Nichols), some not (Tootsie, Reds). Occasionally she acted, most recently as a thrift-shop ditz in Small Time Crooks. So what is she doing in a column dedicated to films that have slipped through the cracks?

Regrettable as it is that the movies she directed are either out of circulation (A New Leaf), little seen (The Heartbreak Kid, Mikey and Nicky) or unfairly eclipsed by financial failure and dim-bulb consensus (Ishtar), there is something fitting about May winding up in the lost property box. Even at her most popular, she gravitated towards elusiveness or anonymity. To a reporter writing a profile of her, she made an unusual request: “I’d appreciate it if you didn’t mention my name in your article.” The sleeve notes on the Nichols/May album Improvisations to Music contained in place of the usual artist biography the enigmatic message: “Miss May does not exist.” Nichols broke away to become a director but May vanished so comprehensively that Life magazine was already moved to run a ‘Where is she now?’ feature by 1967. Perhaps she was secretly thrilled by that.

It wasn’t this aversion to attention that led to May trying to have her name removed from A New Leaf, her 1971 debut as writer and director. After a rumoured ten months of editing, she submitted a three-hour cut to Paramount. (Editing has been a battleground for this director: it was said she shot 1.4 million feet of footage for Mikey and Nicky, three times the amount exposed for Gone with the Wind.) Would you be shocked to learn that Paramount, with Robert Evans as its head of production, did not go gaga for a three-hour black comedy? The studio snatched the film from May and pruned it to 102 minutes. Another sorry tale of a director’s vision disfigured by the marketplace. Except that A New Leaf, in its studio-sanctioned edit, is perfect.

The film, adapted from Jack Ritchie’s short story ‘The Green Heart’, begins with the wealthy New York loafer Henry Graham (Walter Matthau) discovering that a life of Ferraris and fine dining has depleted his collateral. “I’m poor,” he whimpers as serene birdsong floods the soundtrack and Gayne Rescher’s camera trails him woozily through the streets; he drops in on his tailor to say farewell, and caresses forlornly his Mancunian butler, Harold (the glorious George Rose). It is Harold who suggests that a well-chosen spouse might save Sir from penury. “Marriage?” splutters Henry. “To a woman?” He comes around to the idea when it occurs to him that he could bump off this wife and keep the loot. “I’m going to find a suitable woman,” he announces to Harold, “and mur–marry her.”

That poor sap is Henrietta, a millionaire botanist played by May herself with glasses like bicycle wheels, a hungry, lopsided mouth and a full set of butterfingers. “She’s perfect!” exclaims Henry when he sees her fumbling with her teacup at a society function. His attorney has already used disdainfully the same adjective about him (“You’re perfect!”). So we have Henry and Henrietta, both accustomed to prodigious wealth and both ironically “perfect”. We know where this is heading: the killer in waiting and the victim to be will surely prove an ideal match.

Well, yes and no. The distinctive tone of A New Leaf arises from its commitment to Henry’s gruesome plan until the last possible moment. He packs A Beginner’s Guide to Toxicology as his honeymoon reading, and responds to Henrietta’s apologies for being so clumsy by telling her soothingly: “It’s OK, it’s not for long.” But soon he inadvertently starts acting in her best interests. He fires her staff when he discovers they have been stealing from her. And even as he plans her downfall, he is snipping the price tags from the clothes she is wearing, and generally making her fit to go out in public (“She has to be vacuumed every time she eats”). The movie hinges on Matthau’s ability to convince us that Henry is oblivious to his own fondness for Henrietta. As long as that self-awareness is buried, we can never be entirely sure that his Bluebeard fantasy won’t come to fruition, which lends the film a tingle of danger beneath its daftness.

Matthau, widely loved as a comic grump but still underrated as an actor, has never been more skilful than in this balancing act between inspiring revulsion and affection. All clammy jowls and acrobatic eyebrows, he rails against co-habitation (“I don’t want to share things – I want to own them all by myself”) while allowing tenderness to complicate his disgust, never more so than when Henry spends several patient minutes retrieving his hapless bride from within the Grecian gown in which she has become entangled. (Roger Ebert reports having heard more audience laughter during this scene than in anything since The Producers three years earlier.) May’s longer cut is said to include a subplot involving a blackmailer, played by William Hickey, as well as several murder scenes, but any mourning over the absent footage can only be theoretical when the extant film feels so glorious and complete.

Marriage took another pasting in May’s next film The Heartbreak Kid, about a man who wants what he hasn’t got – a warped mirror-image of A New Leaf, in which Henry ends up getting, and liking, the opposite of what he wants. Neither film is sentimental about love, but it is A New Leaf that represents the more miraculous achievement in wresting from domestic torment a plausibly happy ending. Or rather, an ending that is realistic about the compromises required to be happy. 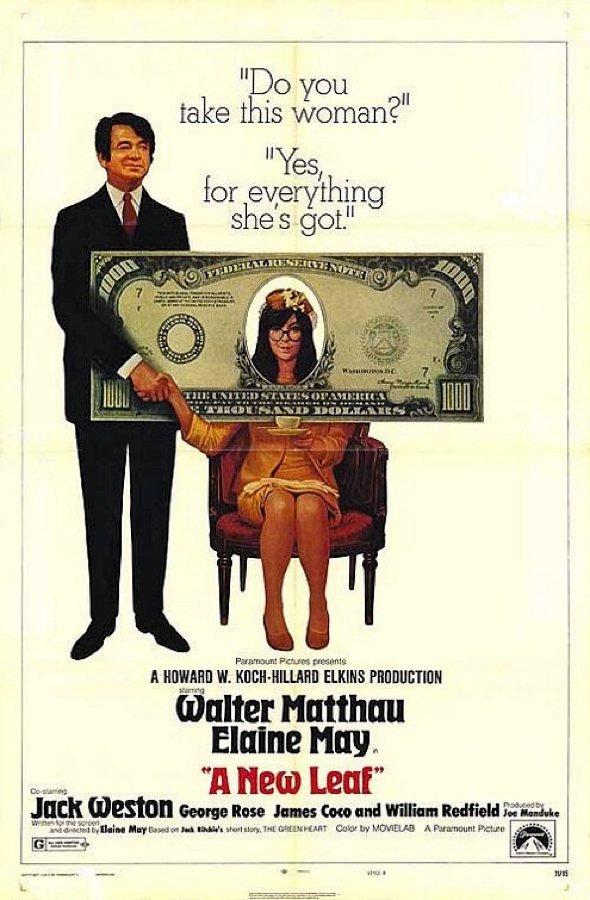 What the papers said

“A beautifully and gently cockeyed movie… Not since the two-reelers of the 1930s in which Edgar Kennedy, the genius of the slow-burn, made his accommodation with the idiocies of Florence Lake, his bird-brained wife, have there been displays of anger, frustration and greed as marvelous as those of Matthau in A New Leaf. Although Miss May’s approach to the writing and directing of film comedy is pretty consistently at the blackout-sketch level, reminiscent of her collaborations with Mike Nichols, the quality of the sketches in A New Leaf is so consistently high, and its cartoon characters are so human, that criticism of its form becomes academic. The entire project is touched by a fine and knowing madness.”

Related to Lost and found: A New Leaf