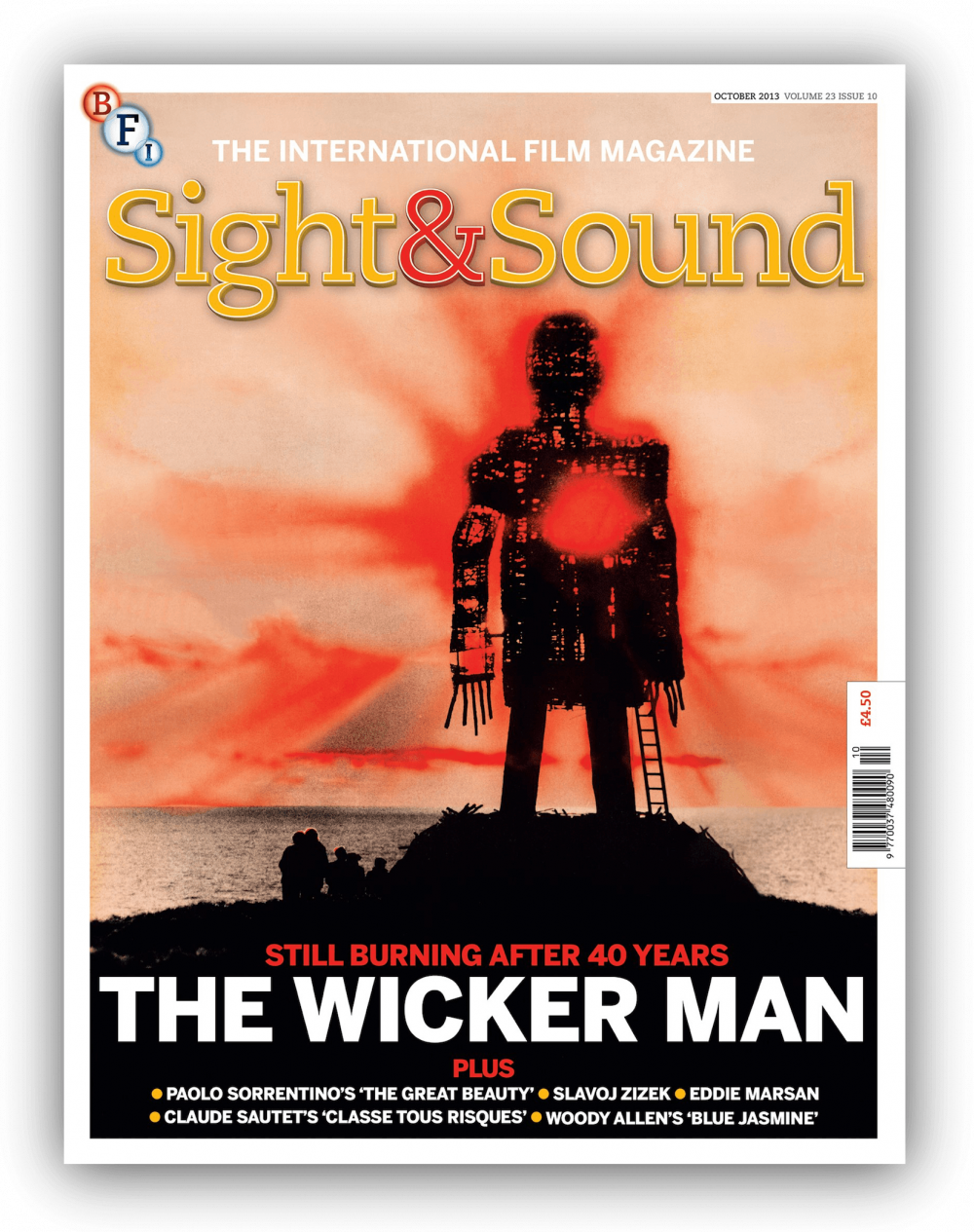 Come, it is time to keep your appointment with our October issue, celebrating 40 years of rising renown of The Wicker Man. Born of the dry taste for elaborate games and wind-ups of advertising partners Robin Hardy and Peter Shaffer, boasting Christopher Lee’s own-declared greatest performance as pagan misty-island magnate Lord Summerisle, and sitting on the fold of pre-Christian Celtic folklore and post-60s hippie social entryism, this “Citizen Kane of horror” must be, as Vic Pratt explores in our cover feature Long Arm of the Lore, “the most splendid example of British ‘folk horror’, in which a remote regional community, and ancient customs and archaic superstitions, dismissed or marginalised by clever-clogs city folk, wreak havoc upon forces of modernity, order and authority.”

It also comes with a release history as unlikely as its on-screen scenario, perhaps deliberately sabotaged by its conglomerate owners, released on the bottom-half of a double bill with Don’t Look Now and soon shredded into countless variants, with longer release prints mysteriously vanishing and original negatives rumoured to be lying under the M3 motorway. Meanwhile American genre fans and Bible Belt conservatives alike embraced the film and its mystique. Pre-digital elusiveness burnished its cult legend; Alex Cox opened his seminal Moviedrome show with it, Nicolas Cage remade it, and now we have an imminent release of a new, final director’s cut. Pratt explores this occult story in conversation with director Hardy, who also provides us with original sketches of key scenes in the film.

From a distant Scottish island to the shimmering vortex of modern Roman high society: with The Great Beauty, Paolo Sorrentino probes the contemporary dolce vita through the wryly cynical eyes of journalist-flâneur and Gatsby-esque party host Jep Gambardella (Sorrentino regular Tony Servillo) as he bobs between nuns, cardinals and strippers in search of his forsaken talent and, perhaps, humanity. Pasquale Iannone celebrates the director’s rapturously stylish way with the crane, the Steadicam and the soundtrack – and delves deeper, past the echoes of Sorrentino’s Italian forbears, past Scorsese and Buñuel, to the unexpected findings of French misanthrope Céline.

And from that caress to the punch: Slavoj Žižek is back to breach our illusions (and delusions) in The Pervert’s Guide to Ideology, a follow-up to his 2006 sally The Pervert’s Guide to Cinema in which he uncovered the libidinal subtexts of classics from Hitchcock to Coppola. Working again with director Sophie Fiennes – “my Leni Riefenstahl” – his new film scales up to examine our social presuppositions and pathologies in films from Taxi Driver to The Sound of Music. But what is ‘the Big Other’? Sam Davies gains an audience, and time for all of two questions.

Time – its ineluctable passage and the marks it leaves – is both subject and tool of James Benning, the American filmmaker and teacher whose legendarily patient, formally rigorous landscape cinema is finally coming to DVD, even as he has moved on from his beloved 16mm celluloid into the land of digital experimentation. In this month’s Sight & Sound Interview, he talks about manipulation, reality, liberty and the fantasy of watching paint dry on film with Nick Bradshaw. Just don’t call his cinema ‘slow’.

Mauled by the studio, obsessed over by fans, deconstructed by academics, remade with Nicolas Cage – yet the pagan British weirdness of The Wicker Man remains fresh. As The Final Cut is released, director Robin Hardy recalls the making of a myth. By Vic Pratt.

In The Pervert’s Guide to Ideology, Slavoj Žižek once again stares into the abyss between what filmmakers want to say and what they are actually saying – with assistance from his ‘Leni Riefenstahl’, Sophie Fiennes. By Sam Davies.

On release, Claude Sautet’s gangster film Classe tous risques was lumped in with the despised ‘cinéma de papa’. Half a century on, fans of authentically tough noir may find themselves asking: ‘Who’s the daddy?’ By Nick James.

Journey to the end of the night

In The Great Beauty, Paolo Sorrentino tracks his journalist protagonist through decadent Roman high society. But far more than a Fellini tribute act, the Neapolitan director is a richly individual stylist and moralist By Pasquale Iannone.

A ghost in the machine

Clerk, boxer, policeman, lowlife, a Stepney-born Peter Lorre and a Fool (or a Lear) in waiting: one way or another, Eddie Marsan is taking Hollywood by stealth. By David Thomson.

Long famous – or at least legendary – for the formal rigour and patience of his landscape films, and for his devotion  to 16mm, the American filmmaker and teacher has now embraced digital technology and is even allowing a DVD release of his work. He talks about manipulation, reality, liberty, and the pleasures of watching paint dry with Nick Bradshaw.

A series of stumbles

How one young animator drew rich inspiration from the divergent yet complementary styles of Norman McLaren and Richard Williams. By Mikey Please.

With vampires and folkies, stories from Mexico, the Philippines and Yorkshire, the BFI LFF 2013 is as multifarious as ever.

The wearing of glasses in films, particularly broken ones, suggests vulnerability and the primacy of intellect over physicality. By Hannah McGill.

The great British cinematographer, who died in August at the age of 99, enjoyed an illustrious career lasting more than half a century.

First sight: Sex and the city

Kieran Evans discusses the importance of Liverpool, landscape and matter-of-fact sex in his feature debut Kelly + Victor with Ashley Clark.

Dispatches: Falling for the movies

From slapstick tumbles to literal cliffhangers, the act of falling is key to the lure of film, but perhaps only weightlessness is truly cinematic. By Mark Cousins.

The cumulative stress of bringing Irvine Welsh’s book to the screen pushed its producer and director right to the very brink. By Charles Gant.

Charles Gant does the sums on alternative content events.

Does the recent success of live alternative content events in cinemas suggest a way forward for independent releases? By Ben Roberts.

The BBC Films head discusses class and gender bias in the media, and crowning her own career with an Oscar nomination for The Queen. By Geoffrey Macnab.

Now nearly 70, the Swiss festival has not lost its cutting edge – it remains invigoratingly hard to summarise or predict. By Carmen Gray.

Preview: Playing by his own rules

The potency of Kenneth Anger’s nine-part Magick Lantern Cycle is as much down to its bewitching soundtrack as its delirious images. By Charlie Fox.

A unique programming venture at Bologna’s festival of rediscovery tunes the viewer into life 100 years ago. By Bryony Dixon.

Three women artists, all based in Scotland, make videos that offer warped, hilarious parodies of contemporary culture. By John Beagles.

+ other releases reviewed in this issue

About Time
Ain’t Them Bodies Saints
Alan Partridge: Alpha Papa
The Artist and the Model
Austenland
A Belfast Story
Borrowed Time
Elysium
Emperor
Filth
For Those in Peril
42
The Great Beauty/La grande bellezza
Hannah Arendt
Harrigan
Hawking
How I Live Now
In a World…
In the Name of/W imie…
InRealLife
Insidious: Chapter 2
Jadoo
Justin and the Knights of Valour
Kick-Ass 2
A Magnificent Haunting/Magnifica presenza
Metro Manila
Mister John
The Mortal Instruments: City of Bones
Percy Jackson: Sea of Monsters
The Pervert’s Guide to Ideology
R.I.P.D.
Rush
The Smurfs 2
Thanks for Sharing
The To Do List
2 Guns
We’re the Millers
Winter of Discontent/El sheita elli fat

The outsiders: Films by Douglas Sirk

Bill Douglas’s appearance in the nightmarish horror-satire is as effective as it is unexpected and unsettling, says Michael Brooke.

+ other new DVDs reviewed in this issue

The Adventures of Prince Achmed
The Brontë Sisters
Cloak and Dagger
The Damned
Films Starring Bette Davis
Deranged
The Driver
Help!
Hemingway & Gellhorn
The Complete Humphrey Jennings Volume Three
The Killing of  a Chinese Bookie
Paul Taylor Dance Company in Paris
The Sun in a Net

Bryony Dixon cheers on another step in the rehabilitation of Mary Pickford.

Jane Giles on a reappraisal of Written on the Wind.

Francis Ford Coppola’s follow-up to Finian’s Rainbow didn’t include a part for Tommy Steele: it certainly had one for Shirley Knight. By Dan Callahan.