The philosopher-contrarian brought his stage shtick to the London Film Festival. Henry K. Miller packed his reality-revealing sunglasses but forgot the tissues.

The Pervert’s Guide to Ideology

Slavoj Žižek thinks he knows his audience – which left-liberal pieties to offend, which to respect, which to clamber not too daintily around.

Within a few minutes on stage at the Hackney Picturehouse he’s saying – in between squeezing his nose and wiping the snot on his sweater, which he does approximately 200 times in two hours – that Nixon wasn’t that bad. He reserves his ire for those assholes Woodward and Bernstein in that bullshit “false left” movie All the President’s Men (1976). Tricky Dicky may have run an off-books surveillance machine in order to staunch leaks of information about the covert bombing of Cambodia, spy on and sabotage his political opponents and so forth, but the Alan J. Pakula film promotes (says Žižek) the dangerous illusion that American democracy is essentially benign and worth reforming.

It’s not an especially outrageous criticism, but is it true? It is rare for Žižek to talk about films as distinct from their synopses, but in any case he doesn’t get bogged down talking about All the President’s Men in detail, or even distinguishing it from the actual Watergate saga (he makes the hit, the clean-up is someone else’s job), so unfortunately we’ll never know. Perhaps every film would be improved by a closing title-card pointing out that, say, although this particular run-down theatre was saved by the efforts of a few devoted puppets, the oil industry continues to exert an insidious influence on the life of the nation; but is this not precisely the kind of political correctness, albeit of a revolutionary variety, which Žižek likes to decry? 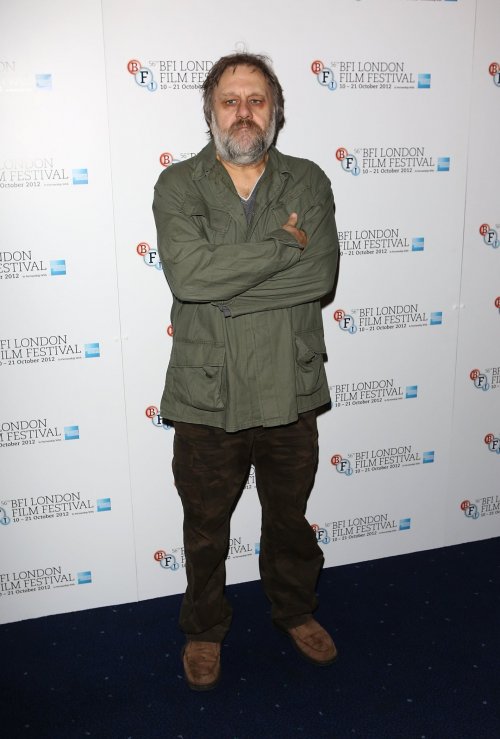 Not all of his cracks at political correctness go over so well (racist jokes defuse tension, apparently), but it’s a sign of Žižek’s well-honed comic talent that he manages to score with a joke about how at least under George W. Bush you could believe that there was a conspiratorial Wall Street-Washington cabal that knew what it was doing (could you?), and with one about Donald Rumsfeld’s reaction to the discovery that there were no WMD in Iraq (surely a sign the conspirators weren’t all that capable?). A lot of his material runs along similarly tired, observational-comedy lines: at one point he gets into a riff on how no-one at art galleries really goes to look at the pictures, recalling his old routine about how the modern world offers coffee without caffeine, cream without fat, beer without alcohol – and so-called safe sex, “another name for sex without”.

But of course, there is a philosophical agenda underlying all this blatant trolling – the subject of his new film with Sophie Fiennes, The Pervert’s Guide to Ideology, which is something like (I haven’t seen it): capitalism, in its current permissive guise, offers only the illusion of choice, between basically identical political parties or “products deprived of their malignant property”, and the corresponding illusion of individual subjectivity. Žižek shows us the strangely extended scene from John Carpenter’s They Live (1988) in which Roddy Piper beats the crap out of Keith David to make him don the reality-revealing sunglasses because it illustrates how hard people cling to capitalist ideology, and that it takes “a certain brutality” – Žižek says in an aside – to get them to wake up and smell the un-decaffeinated proverbial.

Yet, ever the coquette, he doesn’t quite take us there. In a review of Žižek’s latest book, Benjamin Kunkel wrote that “his concept of capitalism is inadequately specified and his notion of communism barely articulated at all”; yet no-one during the Q&A asked him to do either. We came close when an audience member asked whether he had contemplated making a film about banking. No-one on the left, replied Žižek, had had the “courage” to engage with the problem, but he himself (naturally) would not want to indulge in the left’s “cheap moralising” about bankers; nor would he want to fall into the conservative trap of nostalgia for when we used to make things… There were, I’m sure, some laughs along the way as the question was deftly evaded, but is this not precisely the ‘Marxism without Marxism’ about which Žižek warns us? 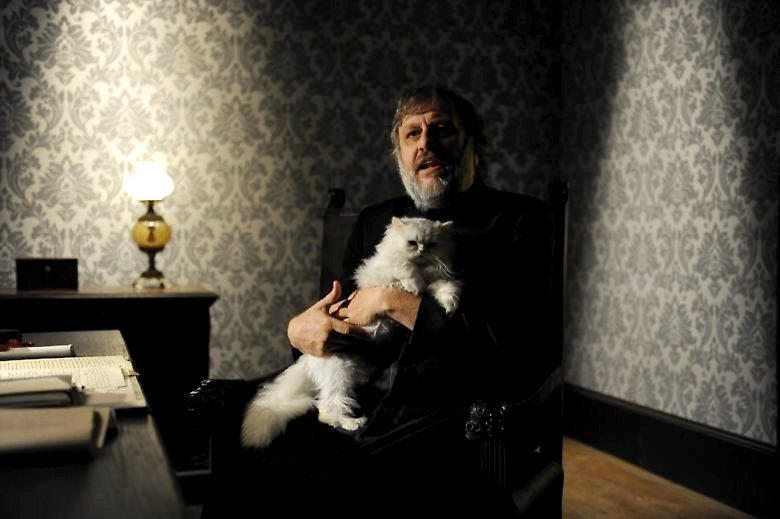 Discussing The Dark Knight Rises earlier on, Žižek focused on an absence: the nature of society in Gotham after Bane’s coup. Bane shuts out the rest of the country, traps the police force underground, empties the prisons, and invites the populace to take its city back. But with few exceptions, Christopher Nolan’s film doesn’t show what happens next. Žižek, though finding the scenes of mob rule reactionary, sees an ambiguity in Gotham’s oddly empty streets.

But is this not precisely a total Žižek move? Nolan has done no worse than him in imagining a post-revolutionary society, and it’s just a tiny bit rich to complain about the film’s depiction of arbitrary justice as the inevitable result of popular uprising when you yourself have actually written of arbitrary justice as a desirable outcome. Describing the crisis in Greece earlier this year, Žižek wrote that the “reorganisation of social life” could not be achieved by legal or democratic means. “To do that, one needs a strong body able to reach quick decisions and to implement them with all necessary harshness.”

One measure of Žižek’s knowledge of his audience, which probably does not share his disdain for condoms, enthusiasm for “emancipatory terror”, and the rest, is his ability to slip these points past them without once being told to go fly a kite. Or at least blow his damn nose. 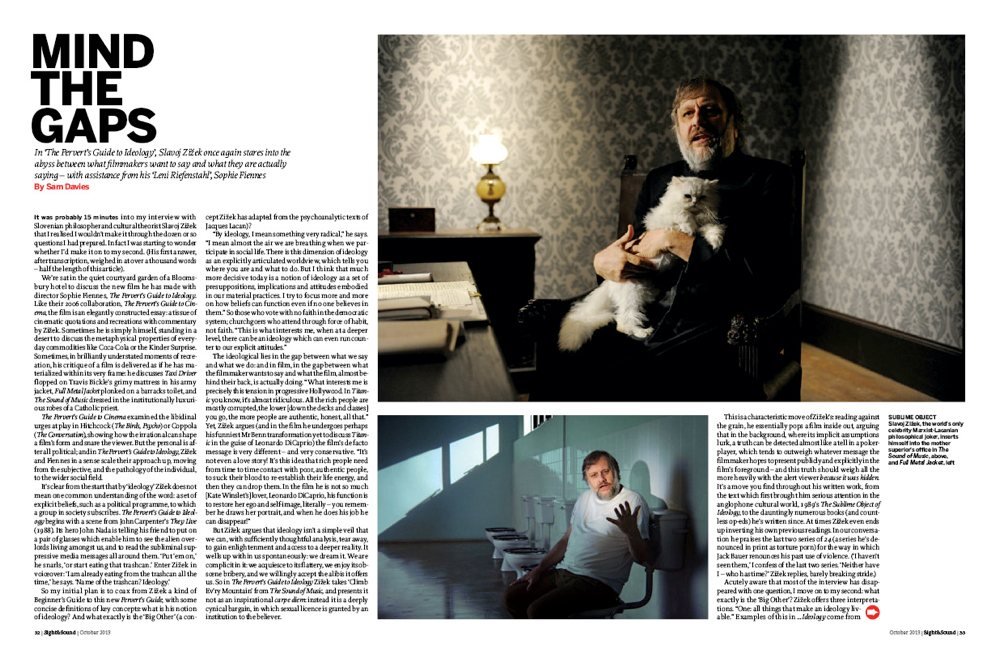 In The Pervert’s Guide to Ideology, Slavoj Žižek once again stares into the abyss between what filmmakers want to say and what they are actually saying – with assistance from his ‘Leni Riefenstahl’, Sophie Fiennes. By Sam Davies.