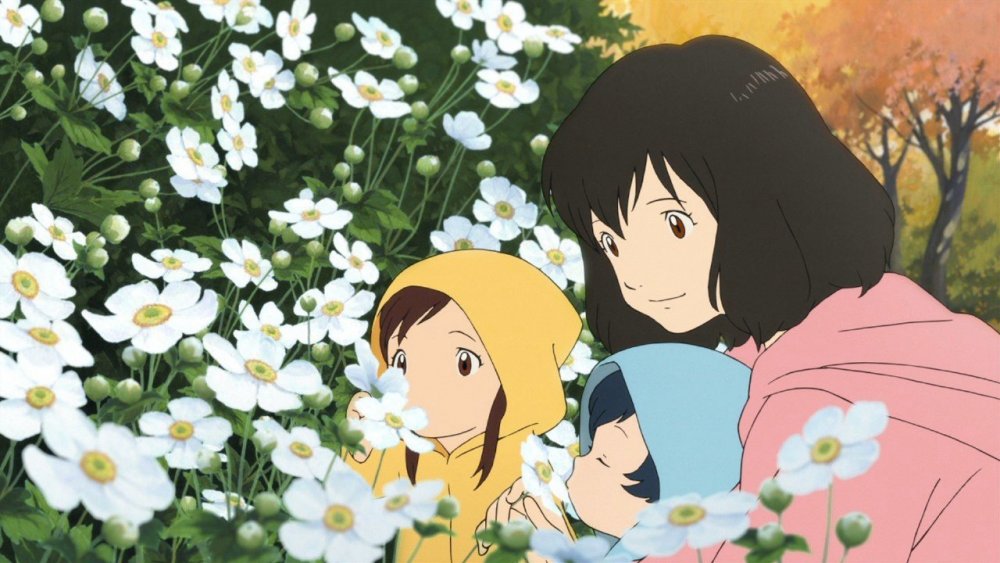 As the third outing of Madagascar proves, animals plus animation equals a successful formula for young viewers. Even more of a draw, perhaps, are films where young protagonists and animals interact, sharing affection and adventures. Two of this years kids’ films, Wolf Children (Okami kodomo no ame to yuki) and Zarafa, work that seam with considerable charm and intelligence, albeit offering diametrically opposite views on the rightful place in society of children and animals both.

Wolf Children is Mamoru Hosoda’s fourth animated feature, after several years’ work on kids’ TV show Digimon. 2006’s The Girl Who Leapt through Time showcased his interest in both small details (in its careful animation) and big questions.

Wolf Children continues in that vein: painterly realist backgrounds, richly textured, play host to the story of an unusual family. Yuki’s opening voiceover introduces us to her mother Hana and her father – the descendant of the last wild Japanese wolf and a human. Unblushingly outlining their courtship and Yuki’s conception, the film then moves between three stories: Hana becoming the mother of two werewolves, and the lives of the two children-pups.

Hoping for anonymity and self-sufficiency, Hana moves to the countryside and a house reminiscent of the fixer-upper rented by the family in My Neighbour Totoro. As the children grow up – Yuki boisterous, her little brother Ame shy – Hana learns to farm and befriends the neighbours. Through an encounter with a wolf at the zoo where Hana works, Ame grows enraptured by the wolf world, while Yuki’s time at school has made her want to fit into the human world.

What younger viewers will make of the second half of the film, with its long scenes of potato-planting and pre-adolescent angst, is difficult to guess, but it’s hard to imagine any viewer not being utterly delighted by the family’s first encounter with snow. Hana’s back-to-the-land plan resonates with the eco-conscious cinema of Studio Ghibli, while Yuki’s first crush and the separation of the siblings is reminiscent of the ethical and emotional conundrums of The Girl Who Leapt through TIme. Wolf Children is a more coherent film than Hosoda’s previous work, but equally unusual in its ambition to tell a big, complex story.

Zarafa, directed by Rémi Bezançon and Jean-Christophe Lie, is more straightforward in many ways: it could be called ‘Pirates! In an Adventure with Bedouins, Balloonists, Slaves and Giraffes!’ Its bold move is to tell the story from the point of view of Maki, a black African boy kidnapped by slavers who escapes with the help of a giraffe. When events take a Bambi’s-mother turn (with attendant effect on Saturday’s young audience, who were listening to English-language narration), Maki vows to protect the giraffe’s young daughter, even as she’s captured by Hassan, a Bedouin traveller who plans to take her to the Pasha in Alexandria.

Hassan and Maki make friends through the agency of Tibetan sacred cows Sounh and Mounh – but Maki is horrified by the Pasha’s plan: to send Zarafa the giraffe to Paris, to persuade the Emperor to send ships to defend Alexandria from the Turks. So he stows away in Malaterre’s balloon for the trip. So far, so inventive as edutainment, alluding in passing to slavery, the Ottoman Empire, the Silk Route and African cultures.

Clear, stylised, David Lean-ish sweeping scenes of the Sahara give way, however, to a fussy hyper-realist France peopled by grotesque caricatures, as if the film were moving from the (heavily felt) influence of Michel Ocelot to that of Sylvain Chomet. Once in France, the rhythms of the journey are also circumscribed as both the Emperor and the slaver intervene with evil intent.

Both films resort to deus, or rather animal-ex-machina endings: in Wolf Children, Hana finds herself in limbo, receiving Dumbledore-like instruction from the children’s father, while in Zarafa, the giraffe herself finds her voice – ten minutes from the end of the film.

Hosoda’s broad ending is off by degrees, but Bezançon and Lie hit the film into the rough, forcing Maki to break the promise that had been the film’s guiding light, then tacking on a nauseating ending in which everyone gets married, has babies and upholds the status quo (even if that’s a zoo). Zarafa’s been picked up for distribution by Soda, and there’s no question that its first hour offers a welcome alternative to Disney/Pixar; but Wolf Children is the bigger, richer film, and the one I’d want my children to see.

Related to London 2012: Wolves vs giraffes! More animation for kids