Pushing the stereoscopic envelope once more with the National Film Board of Canada. 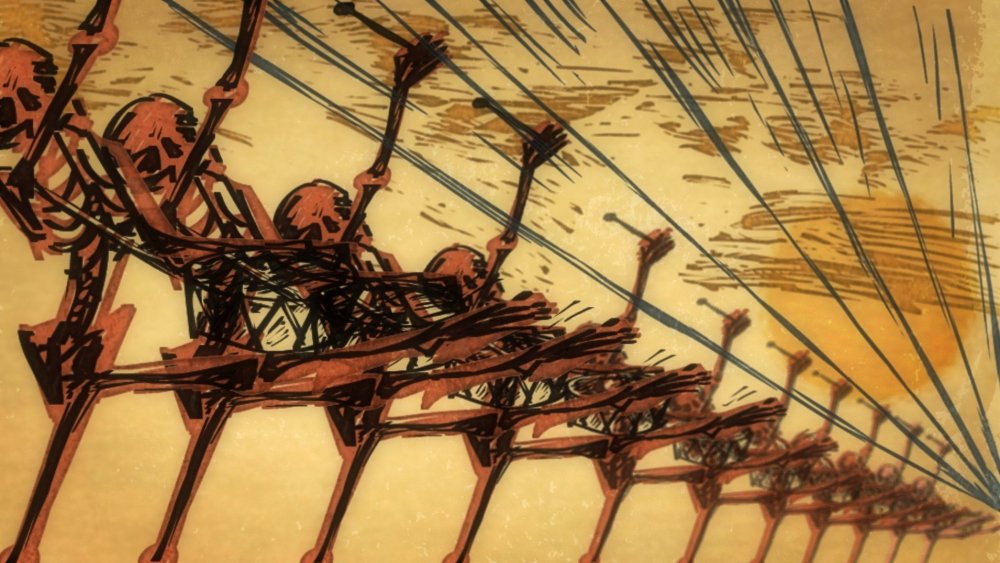 In 1952 the Monthly Film Bulletin reviewed a programme of 3D films shown at the Festival Gardens on London’s South Bank. There was one animated film in the programme, Twirligig (1952), produced at the National Film Board of Canada by Norman McLaren with Gretta Ekman. The piece concluded:

“It seems curious that McLaren should be able so successfully to exploit the three-dimensional screen while, with the other films, one is left with some sense of novelty undertaken simply for its own sake. As a whole, the advantages of stereoscopy still remain, after this programme, purely conjectural.”

In the last decade the NFB has returned to stereoscopic filmmaking, and this year’s London International Animation Festival (LIAF) featured a programme of 18 3D films curated by Munro Ferguson, head of the NFB’s stereoscopic lab. Sixty years later, but this time in an all-animated programme, there was a similar mix of gimmick and greatness.

Like most artistic techniques, the successful use of 3D seems to require an extraordinary amount of thought, research and practice, or a rare intuition and visualisation paired with appropriate craft skills. The LIAF programme wasn’t helped by the inclusion of seemingly every film from the 2010 edition of the NFB’s annual ‘hothouse’ internship programmes, which focussed on 3D. It’s hard enough to make an interesting film in three months, particularly in animation, but throw a third dimension into the mix and the results are bound to be flawed, however interesting.

The difference between two of Ferguson’s own films was a good illustration of the shift required. 2003’s Falling in Love Again uses a simple cartoon-narrative backdrop as an excuse to explore the technology.

This year’s June, by contrast, uses 3D’s depth and layering to create an abstract portrayal of the unravelling of personality through Alzheimer’s. The developments of technology and software between the two films were probably exponential, but the true progression is in the vision behind the films, with stereoscopy used to elevate the idea in June, rather the idea used to elevate stereoscopy.

The good films in the programme would still be good in 2D, Chris Landreth’s delightfully absurd Subconscious Password (2013) being a good example.

Landreth is best known for his Oscar-winning film Ryan (2004) [watch it at nfb.ca], pursuing the psychological state of a fellow animator; his latest, on the struggles of remembering a past acquaintance’s name, could be accused of whimsy – but that would be unfair. What makes his work so interesting is his pursuance of new palettes and approaches for CGI. Computer animation isn’t about shortcuts, mimicry of other forms or cutting costs; it’s a technique that’s been around for over 50 years, yet its true potential has barely been explored. Landreth’s mix of archive video, pixilation and subconscious exploration through CGI is an intoxicating recipe that could easily fail but doesn’t. It’s intelligent and fun, and the 3D reinforces the latter. 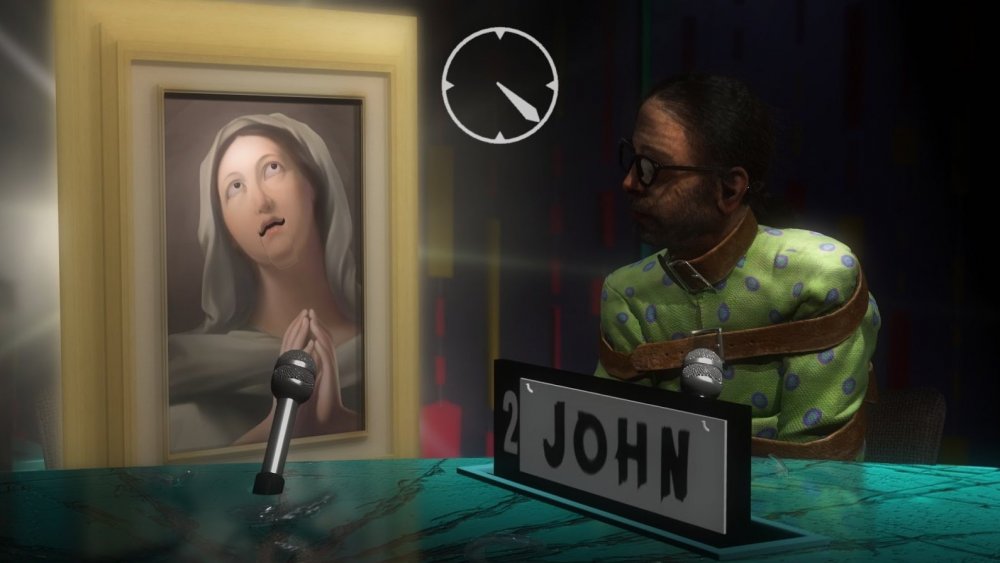 Theodore Ushev [homepage] has rapidly emerged as one of the most exciting, relevant and provocative of contemporary animators, and his work will surely become more widely known to general audiences in the coming years. Of Bulgarian origin, with a background in poster design, since moving to Canada in 1999 he has garnered increasing acclaim for a series of films produced at the NFB, with 2011’s Lipsett Diaries [watch it at nfb.ca] probably being the best known.

His ‘3D trilogy’ (2006’s Tower Bawher wasn’t conceived as a 3D film but was retrofitted to create a stereoscopic version) are what he terms “poster films”, designed to grab the attention, to provoke a reaction and speak to the soul. They’re also tributes to modernist art movements like constructivism (in the case of Tower Bawher) and Vorticism (this year’s Gloria Victoria):

Music is of fundamental importance: Ushev has said he doesn’t choose his music, it chooses him. It’s true that once you have heard Shostakovich’s Leningrad Symphony (No. 7) paired with Ushev’s imagery in Gloria Victoria it will be very hard to separate them again.

These are all great films, but does the 3D add to them? Here, most certainly, especially in 2008’s Drux Flux, which builds a montage from shots of a decaying 19th-century German foundry, mixing documentary with abstract animation:

Ironically, 3D imagery, particularly computer animation, can lack in texture, almost losing depth, but the woodcut-style poster graphics of Gloria Victoria retain a glorious inkiness to them. 3D and the ‘poster film’ seem a perfect fit.

The last film in the programme was Philippe Baylaucq’s Ora (2011) [watch it at nfb.ca, or buy a download], an experimental 3D dance film which featured the least animation, but certainly fits into a tradition of films like McLaren’s own Pas de Deux (1968) [watch it at nfb.ca].

The film was made with a thermographic camera, which recorded the body heat of the dancers, reducing them to a stark silvery-blue palette hanging in a generally black space. Most effective was the scenes which used the shadows of the dancer’s residual warmth on the floor – almost painting with heat. Animation or not, I found it extremely effective; as Wim Wenders’ Pina showed, mixing 3D with contemporary dance on film is certainly a valuable seam for exploration. 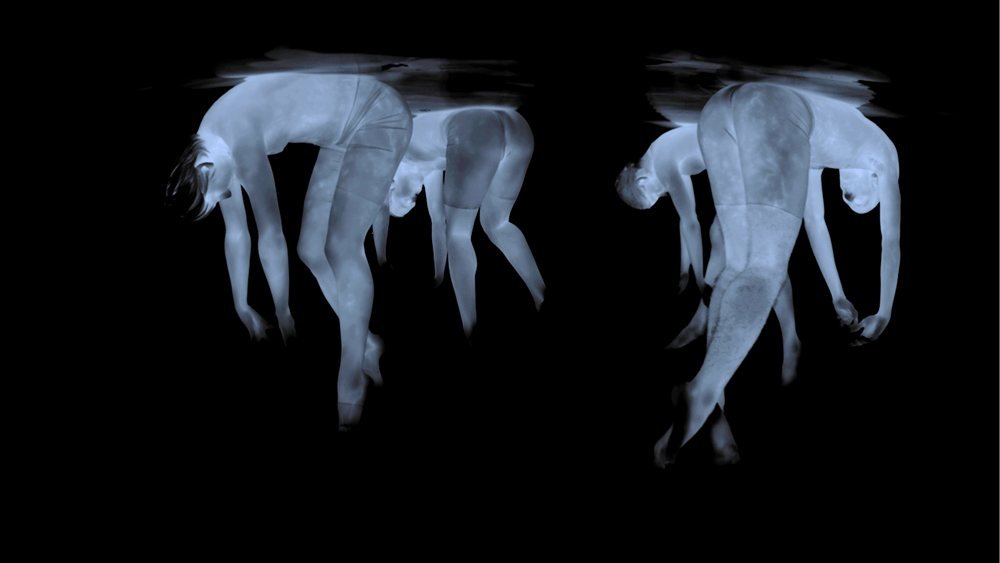 To celebrate International Animation Day the NFB has a programme of their films, Get Animated, available online throughout November, including a focus on the work of Landreth and Ushev. All three of Ushev’s films can be seen here (even in 3D if you have the right glasses at home) as well as his other works. Subconscious Password isn’t currently available – although the trailer gives you a good flavour of its zany approach – but his other films are equally worthwhile.