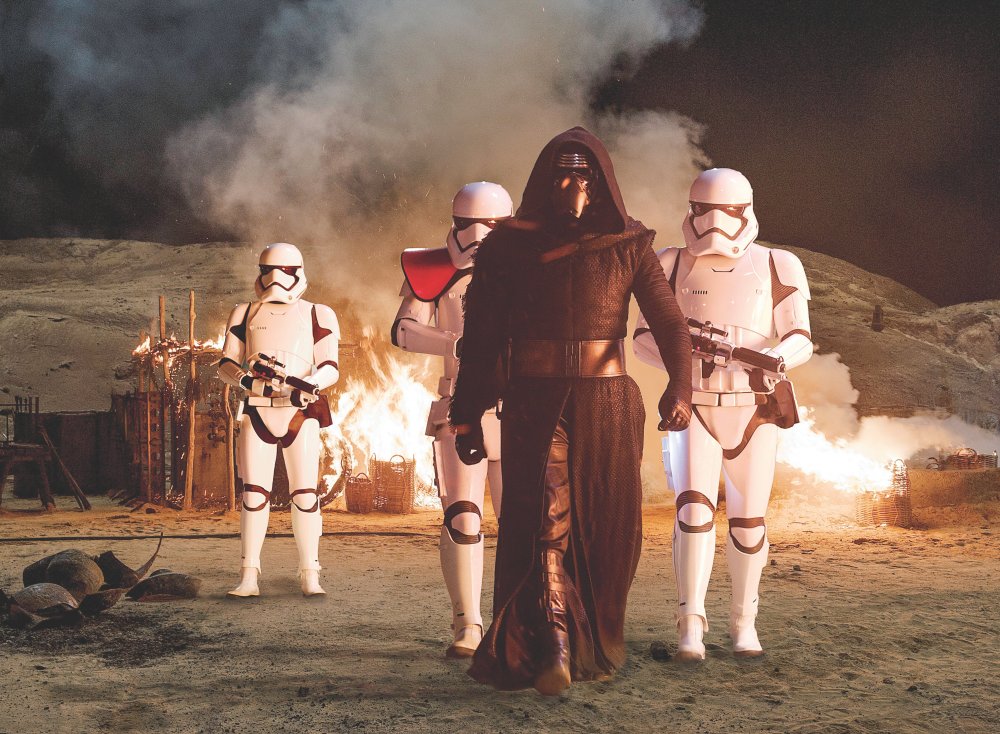 Spoiler alert: this review outlines plot points including the last scene of the film.

Star Wars: The Force Awakens gives the legions of fans of the franchise what they want – exactly what they want, in so far as anyone can be certain, and a lot of it. The J.J. Abrams-directed seventh entry in the franchise, the first part of a new sequel trilogy, contains a great deal that is familiar from George Lucas’s foundational 1977 text A New Hope. Once again the key character is an orphaned youth living on a backwater desert planet who is suddenly thrust into the heart of an intergalactic conflict after stumbling across an adorable droid carrying contraband information. Here it’s Rey (Daisy Ridley), who like Luke Skywalker before her happens into the company of Han Solo (Harrison Ford, among many stars returning to their roles), discovers that she is strong with the Force and has to face off against a masked warrior of the Dark Side, Kylo Ren (Adam Driver), the son of Solo and Princess – now General – Leia (Carrie Fisher) and grandson of Darth Vader. As the film ends, Rey sets off to train with a reclusive Jedi master – Skywalker himself, who we’ve seen enter into much the same student-mentor relationship with Yoda. There is even a new planet-smashing Death Star called the Starkiller Base, though the film makes some effort to establish that it is different from the old Death Star. It is, you see, much, much bigger.

And, yes, The Force Awakens is much, much bigger than A New Hope. The first Star Wars film was released more than 38 years ago – a long time ago in a culture far, far away. Its lasting impact on viewers who were adolescent or younger at the time is easy to understand if you look at the contemporary pop-culture landscape – if you were after exotic, rambunctious escapism, George Lucas was the best game in town, apart from maybe Gene Simmons, and I could never impugn a Gen X-er’s undying fondness for either.

Incoming generations traditionally disdain the toys of the last, but these movies have continued to hold an almost sacrosanct place in the popular imagination that is practically unique and, I confess, baffling to this child of the Reagan administration. (The nearest equivalent might be the Rocky saga, recently revived to deserved acclaim by Ryan Coogler.) For a young person today to be swept up in the mania surrounding Star Wars is equivalent to a child in 1977 swearing allegiance to the Charlie Chan, Mr Moto and Mr Wong franchises, Andy Hardy pictures, George Stevens’s Gunga Din, Zoltan Korda’s The Four Feathers or any other product of the late 1930s.

The examples of the Stevens and Korda films – both propagandistic, boisterous pieces of Victoriana extolling the image of Brave Little England as she prepared for the Blitz – are most pertinent to A New Hope, for they are the sort of things that a young George Lucas would have watched on television in suburban Modesto, lifting their brash can-do heroism and acrobatic derring-do for the children of ’77. 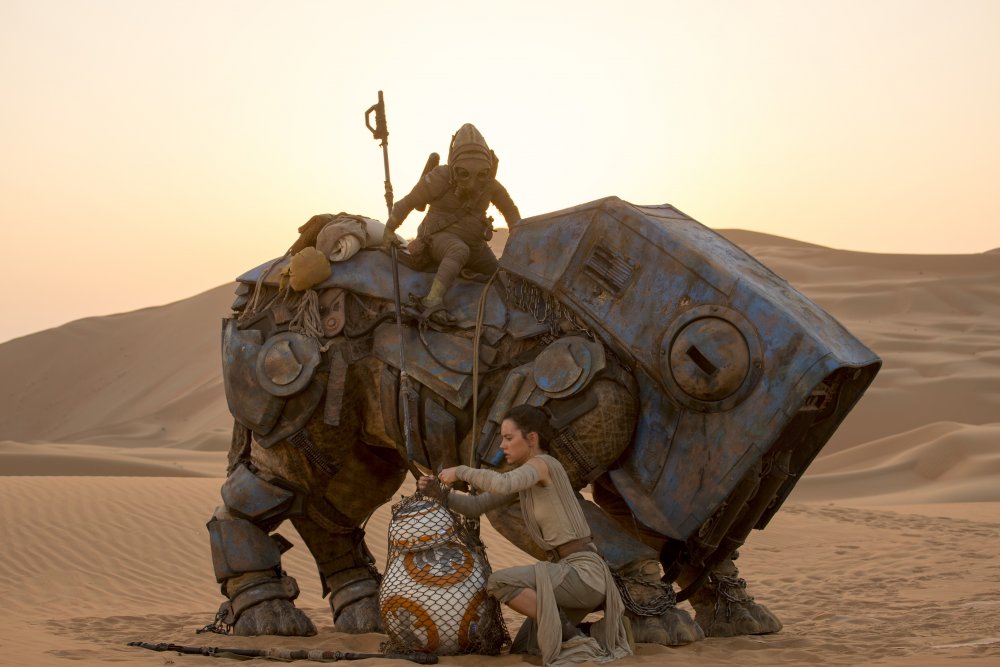 Abrams is 49, which puts him right smack in the middle of the generational cohort I discussed above. He didn’t grow up watching Depression-vintage Flash Gordon serials, he grew up watching Star Wars – and, of course, reruns of Star Trek, another beloved and beleaguered franchise on which he did an adequate enough rehab job to land this gig. (He is also, lest we forget, responsible for directing the most colourlessly competent entry in the Mission: Impossible series.)

In The Force Awakens, Abrams shows that he’s taken careful notes on the moves that Lucas pulled out in A New Hope but seemed to have forgotten in the three execrable prequels that began with 1999’s The Phantom Menace. There are, yes, breathtaking vistas that invite a sense of awe – particularly the views of Rey’s home planet Jakku, littered with the husks of Imperial weaponry from the late war, as the legacy of the first trilogy hangs over the film.

More importantly, Abrams knows not to use a tablespoon where a pinch will do. Much of the allure of the Star Wars universe can be found in the Mos Eisley cantina scene – and yes, there’s a reprise of that here too, in a watering hole run by Maz Kanata (Lupita Nyong’o) – in which you’re afforded offhand glimpses of a dozen or more critters who’d be at the centre of any other movie. Through suggestion, Lucas built an immeasurably vast universe, inviting viewers to fill in the margins with their imaginations, and creating cult reputations for characters granted only a slim amount of screen time.

The air of ceremony is mostly reserved for the reintroduction of the returning ‘classic’ cast – R2-D2 is literally unveiled like a piece of statuary, though C-3PO (Anthony Daniels) blunders into the middle of a sentimental reunion in one of the movie’s more successful instances of comic relief. There is also a nice callback bit involving Kylo Ren’s tendency to throw temper tantrums, and some moderately amusing in-over-my-head bluster courtesy of John Boyega, in the one part that has no clear analogue in the earlier films, that of ‘Finn’, a Storm Trooper who defects from the First Order. This is the name the recrudescent Galactic Empire now goes by, its fondness for throwback 30s fascist fashion undiminished.

Oh, there’s a new emperor too, Andy Serkis’s Supreme Leader Snoke. (Like the Starkiller, he’s also a lot bigger than the original model.) And more daddy-issues melodrama. And another ‘oh no they didn’t’ martyrdom of a character played by a grey-eminence actor – even the shocking twists come with an air of predestination.

Taking on Star Wars, Abrams is like someone who has been trusted with the keys to a Maybach – his one job is to bring it back without a scratch, and he does this by steering very, very cautiously. The closeness with which The Force Awakens follows the template of A New Hope can be explained away, however, as less a failure of nerve than a structural illustration of the basic premise of the Star Wars universe. Just as the continuity of tradition in Coogler’s Rocky sequel Creed recalls A.J. Liebling’s maxim that boxing “is joined on to the past like a man’s arm to his shoulder”, so the déjà vu of Abrams’s film suits a universe wherein Jedi and the Dark Side are locked in continual and eternal combat, a perpetual Star Wars for perpetual Star Peace.

To the eyes of this apostate, Boyega, Driver, Ridley and Oscar Isaac, who plays X-wing ace/Han Solo fill-in Poe Dameron, represent an infusion of capable talent. Everyone is fine and no one is outstanding, which few people seem to consider a liability in these days of grand multi-part narrative constructions, when the ball is only really supposed to get rolling after you’ve invested four hours or more. Seeing the returning players nearly 40 years on is, almost inevitably, moving – I am thinking particularly of one cutaway to a mournful Chewbacca (Peter Mayhew) – and while the handling of the dogfights runs to slick tedium, the climactic lightsaber clash gives clearer evidence of these movies’ much reported samurai-film DNA than anything in previous instalments. (Pencilling names like Poe and Finn into the dramatis personae, meanwhile, adds American signifiers to the hotchpotch of references in the series’ already overloaded mythical junk-drawer.)

What usually comes here is an obligatory ‘fans of the series will get what they came for!’ – which is completely true, though such resistance-is-futile prevarication in the face of monumental adequacy is a critical cop-out. Abrams is playing conscientious steward to what’s widely regarded as a national treasure here, and he handles his business in a composed, collected manner. There are no glaring missteps in The Force Awakens, and on such a stage this kind of performance might even pass for greatness – for a little while.