Rogue One: a Star Wars Story review – a space saga in the doldrums

Gareth Edwards’s earnest exercise in franchise engineering raids the Star Wars archive for narrative offcuts and old faces – but lacks the splendour of its predecessors. 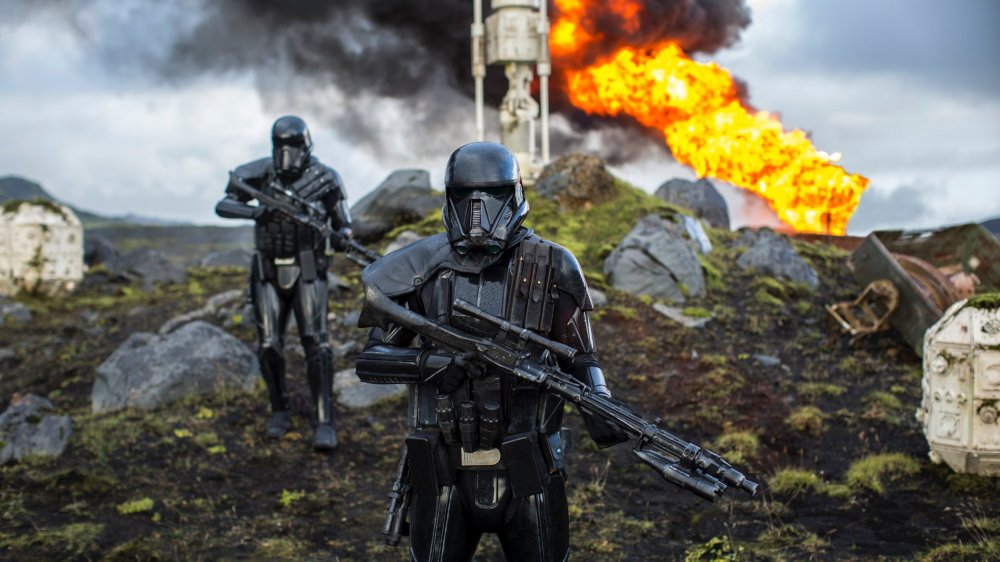 Four years after Disney acquired Lucasfilm and the Star Wars jewel in its crown, the wheels of commerce turn and yield up the first film to sit outside the saga’s mainstream narrative of the Skywalker family tree – though not very far outside. Officially sporting the righteously on-brand title of Rogue One: A Star Wars Story, this continuity implant sits directly before George Lucas’s original Star Wars (1977) almost to the minute, revealing how the vast star destroyer that loomed over the audience at the start of that film came to pursue one princess, two droids and a workable macguffin in the form of the plans to an impregnable battle station and its unfortunate weak spot.

A culture stuck in perpetual recycle mode shows its hand through an urge to explain away perfectly reasonable pieces of silliness such as the Death Star’s overlooked exhaust pipe with highly serious straight-faced rationales – in this case, that the designer put it there deliberately while the geniuses of the Empire were too busy goose-stepping to notice. Such earnest clarifications betray the uneasy relationship with a past that, if hardly carefree, cared about its pop culture in less self-conscious ways.

The same urge motivates this film’s version of Darth Vader, who for all his steely demeanour and the grand vocals of James Earl Jones on the soundtrack has never stopped seeming on screen like a large actor in uncomfortable boots. Here he’s finally a swift and evil juggernaut, carving a corridor of rebels into chum with a windmilling lightsaber. Some of us saw nothing wrong when Vader’s helmet rocked slightly on top of David Prowse’s head in a stiff breeze during The Empire Strikes Back (1980), but the days of such analogue vital signs are gone. 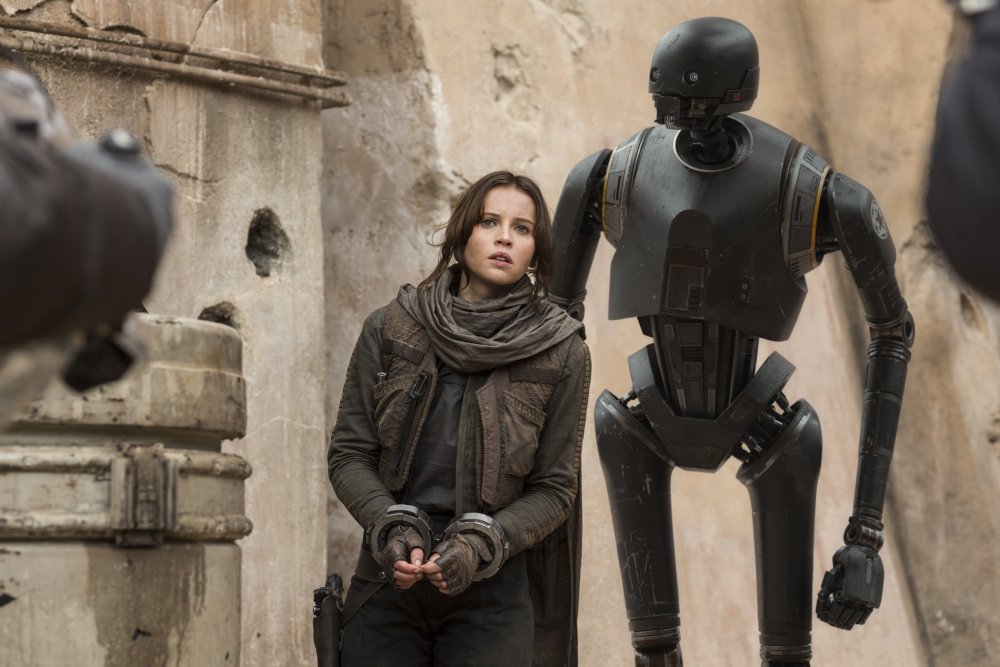 Also gone, at least in the Star Wars Story aisle, are the visual style markers of previous Star Wars films and the romanticism of a John Williams score. Gareth Edwards, earning this film’s reins after Monsters (2010) showed a fine eye for digital effects and Godzilla (2014) played sneaky games with expectations of big critters hitting each other, is clearly a fan, recreating several motifs from the canon. The jagged editing and shallow-focus visuals are a long way from Lucas’s blazing colour fields and abstract inclinations, however. When J.J. Abrams restarted the whole vast machine in The Force Awakens (2015) and nurtured its screwball tendencies, he also ensured that it would feature suitable chromatic voltage by hiring Dan Mindel as cinematographer, but Rogue One is deliberately flattened into a more mundane sensory style, removing one concrete point of difference in a genre where the playing field is now all too level.

Meanwhile the story itself is mundane for less intentional reasons. If Lucas clearly kept his own counsel throughout his stewardship of the saga and threw studio interlopers into the Lucasfilm car park, then Rogue One feels annotated into the doldrums. Apart from Ben Mendelsohn’s weaselly Orson Krennic, a vain civil servant stuck with a troubled infrastructure investment (and perhaps Donnie Yen as a blind samurai, a nod back to Lucas’s magpie cultural influences, now deployed to global box-office advantage), the faces are unmemorable and the characters unexceptional, their meaningful glances unearned.

Rogue One continues the saga’s not-hidden message that the factions standing against fascism are so woeful at the job they should pack it in, while its own narrative fades into offcuts of other established Star Wars climaxes. Eventually, a space battle erupts on the high frontier, below which some distractingly sketchy individuals – including an anonymous bunch who have only just turned up for the purpose – assist Jyn (Felicity Jones) with the obligatory gameplay of throwing the switch to fuse the plasmonics and banjax the overspanner. 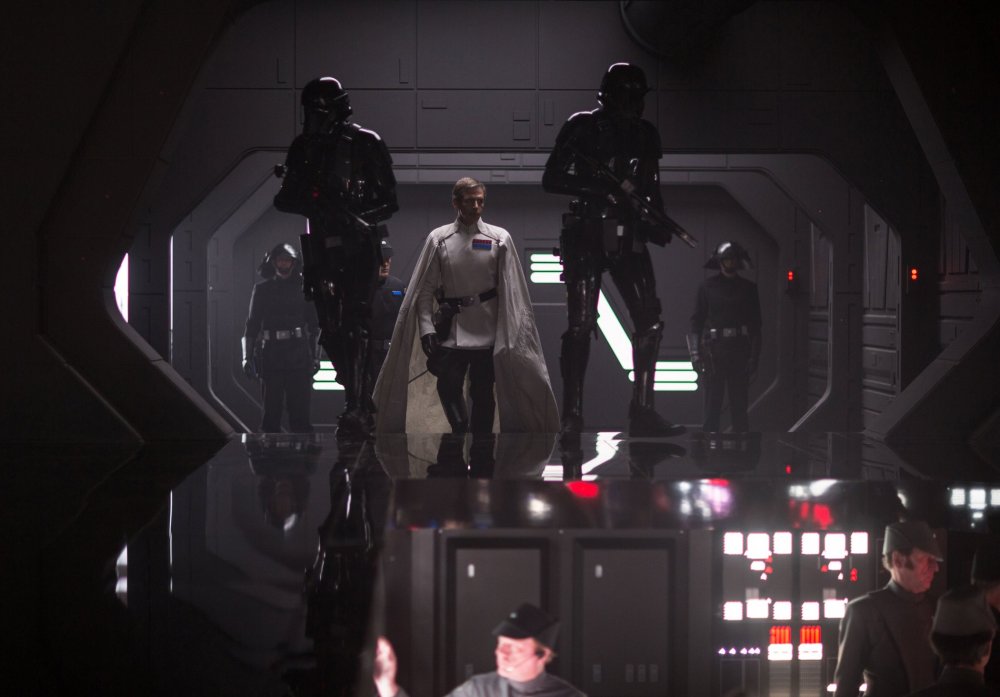 The Force Awakens resisted this sort of entropy when Abrams and his writers walked the knife edge between homage and pastiche, but it gets in everywhere eventually. It certainly got into the software for recreating inconveniently dead or aged performers, which remains a cast-iron bad idea. Rogue One summons up two faces from 1977 and the results show the straitjacket of franchise engineering, where the effort to light some referential visual sparkler rarely gets turned inwards instead towards non-visual matters, like patching up character arcs that are shipping water, or indeed junking them altogether. Lucas couldn’t leave his own Star Wars visuals alone, but his endless pixel-tweaking was – by internal logic anyway – fully in service of the story. None of it had an off-putting effect to match meeting the simulacrum of a deceased Hammer Film stalwart, speaking from behind a mist of digital ozone.

Related to Rogue One: a Star Wars Story review – a space saga in the doldrums