Star Wars: Episode II – Attack of the Clones archive review: it’s hard to be a Jedi in love

Dazzling action and a fog of allusions can’t rescue this grandiose and badly acted movie, which grinds to an especially painful halt during its sulky teen romance, according to our original 2002 review. 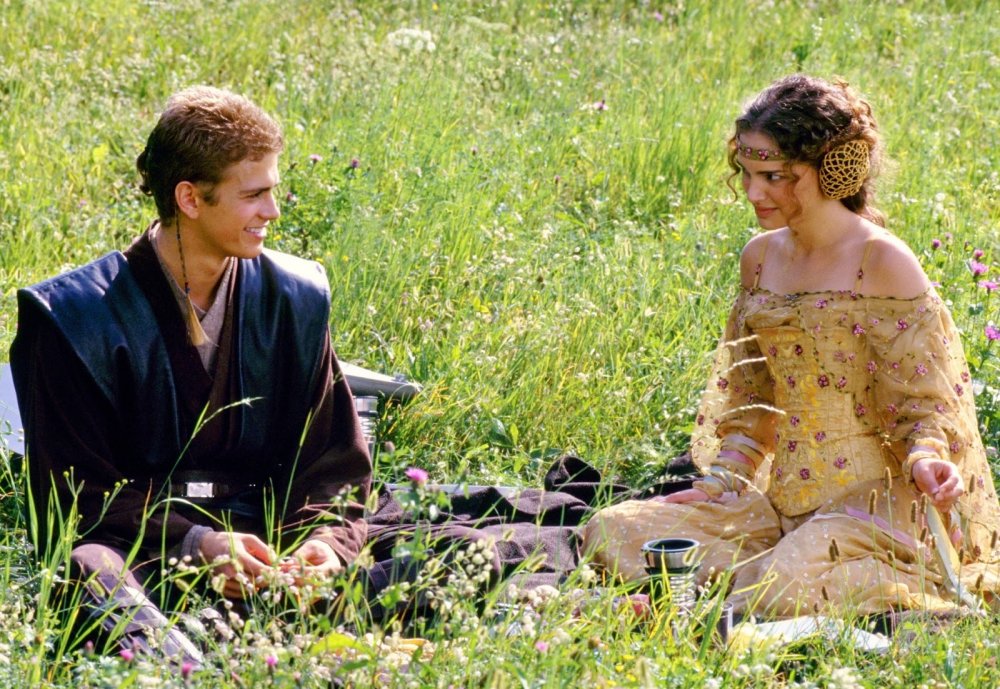 Hayden Christensen as Anakin Skywalker and Natalie Portman as Padmé Amidala in Star Wars: Episode II – Attack of the Clones

At least George Lucas has had the common sense to return the Star Wars saga to its roots: rampant piracy and hysterical pastiche. The ponderous air of Asimovian prologue that made Episode I The Phantom Menace so nearly unendurable has mercifully been abandoned, and the cartoonish characters from that film who struck many viewers (myself included) as grossly offensive ethnic stereotypes have been written to the margins but not (sadly) banished altogether.

What remains is a crisply managed entertainment that moves deftly from one dazzling digital setting to another and lards its story judiciously with well-executed action sequences. If the plots of Lucas’s overall narrative (and of this instalment) have become baffling and arcane, that’s nothing new to those steeped in Skywalker lore. Fans will surely welcome Episode II Attack of the Clones as a return to form, probably the most agreeable entry in the series since The Empire Strikes Back (now designated Episode V) in 1980.

Yet even sympathetic observers can detect a disturbance in the Force, one that cannot entirely be blamed on the sinister Count Dooku played by Christopher Lee (distinguishable only by his wardrobe from Saruman, the good wizard gone bad he plays in Lord of the Rings The Fellowship of the Ring). A quarter of a century after the first release of Star Wars, Lucas has become like Darth Vader, a prisoner of his own inflated mythopoetics. As the nomenclature of his universe becomes ever more ludicrous and his grand storyline grows in complexity and gaseousness (“Our intelligence points to disgruntled spice miners on the moons of Naboo”), it increasingly seems that Lucas is a bored god who no longer cares about his creation way or the other.

Episode II Attack of the Clones is more crowded with quotations and references than any previous Lucas film, but it’s hard to say whether they make any kind of point; there is a compulsive, perhaps desperate quality one never sensed in his earlier work. Here Lucas is not merely imitating himself (and the original sources he imitated in the first place) but is imitating his imitators and sometimes imitating films markedly inferior to his own. Much of the appeal of his original 1977 film – the one he now wants us to call Episode IV A New Hope – lay in its wide-eyed mythic shallowness, its catholic embrace of Flash Gordon serials and westerns and samurai films and the grandiose pulp epics of early science fiction. These were all things Lucas evidently loved, and taken together they defined a world view that was boyish, idealistic, short on moral subtlety and profoundly American.

The sheer density of allusion in Episode II can be thrilling for movie buffs. The cloning station on the ocean planet Kamino comes from Tarkovsky’s Solaris, Anakin Skywalker’s act of vengeful violence on Tatooine recalls John Ford’s The Searchers (after briefly referring to the biker-film tradition of The Wild Ones and Easy Rider), and so on.

In the film’s major showcase sequences, Lucas jams together disparate elements with mixed results. The exciting spacecraft-chase sequence through the vertiginous spaces of the city-planet Coruscant, in which Obi-Wan Kenobi (Ewan McGregor) and Anakin pursue the would-be assassin of Padme Amidala, emulates the most memorable scene in Luc Besson’s ludicrous The Fifth Element while, inevitably, nodding to Ridley Scott’s Blade Runner and accessing Lucas’s own quasi-sexual, spaceship-through-a-tight-channel leitmotif. Later, when Obi-Wan, Anakin and Padme must fight an array of phantasmagoric monsters in a desert amphitheatre, the touchstones seem to be Scott’s Gladiator (and its numerous sword-and-sandal predecessors), Paul Verhoeven’s Starship Troopers and the classic 1950s stop-motion animation of Ray Harryhausen.

Of course in any Lucas film (at least until now) the director eventually has to deal with actors, and the results in Episode II are no more encouraging than usual. It’s easy to ridicule Lucas for his inability to depict the complexity of adult emotions, but his attempt here to capture the melodrama of teen romance – between Anakin (Hayden Christensen) and Padme (Natalie Portman) – would seem chaste and dull by the standards of US network television. This forbidden love is clearly meant to be the emotional core of the entire Star Wars prequel trilogy (and presumably in Episode III will lead Anakin to renounce his Jedi vow of chastity and embrace the Dark Side). But during the love scenes the pell-mell pace screeches to a halt while Portman and Christensen mumble their way dolefully through Lucas’s abysmal dialogue against a variety of lovely artificial settings.

Those actors who survive a Lucas film with their reputations intact, as Lee, McGregor and Samuel L. Jackson do here, plant their feet firmly on the jet-age or Stalinist-chic sets and bellow their lines, Errol Flynn style. Christensen tries to convey Anakin’s inner torment with a sort of brooding Brando impersonation, but mainly comes off as a sulky vacuity. When Padme points out, after his driver mother’s death, that he isn’t all-powerful, he pouts: “Well, I should be! I will be!”

In this same scene, Padme finally admits to Anakin that she loves him, just after he has confessed to her that he has massacred an entire village. Lucas gives her no indication that he sees this contrast as grotesque or inappropriate; indeed, throughout the first two-thirds of this trilogy he seems profoundly uncomfortable with the task of making the cute kid of The Phantom Menace and the dreamboat teen of this film grow into the monstrous tyrant in the impressive black headgear. As derivative space opera goes, Episode II Attack of the Clones is enjoyable enough. But at heart it’s a forgettable and discontented tale of entropy and corruption, of a grand, idealistic venture that has lost its way. It’s no Star Wars.

Related to Star Wars: Episode II – Attack of the Clones archive review: it’s hard to be a Jedi in love