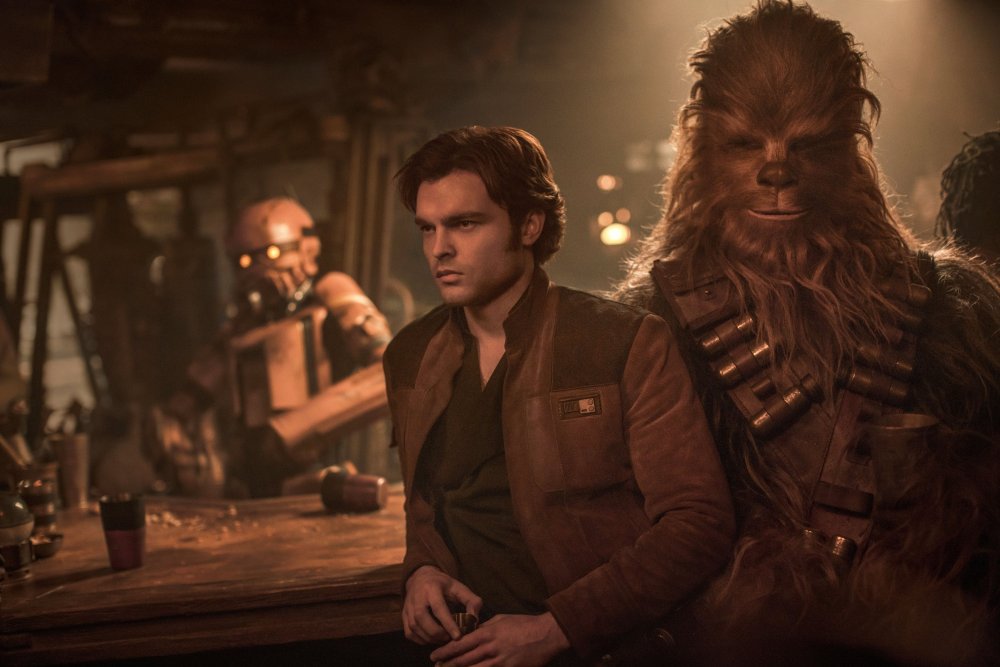 Six years ago, in a boardroom in Burbank, CA… Disney acquired Lucasfilm and its most lucrative intellectual property, Star Wars. Work soon began on a continuation of George Lucas’s space-opera saga, resulting in Episode VII – The Force Awakens (2015), but parallel to a proposed new trilogy, two films under the ‘Star Wars Story’ banner were announced. These standalone films were to take place in the margins of the established continuity set by the first six Star Wars films (produced from 1977 to 1983, and then from 1999 to 2005), exploring new characters, worlds and storytelling styles hitherto overlooked by the franchise.

Gareth Edwards’s war-ravaged heist movie Rogue One (2016) followed a makeshift mob of heroes in their pursuit of the plans of the planet-destroying Death Star, lining up perfectly with the opening moments of Star Wars: Episode IV – A New Hope (1977). And now, Solo: A Star Wars Story reaches back further in the overarching timeline to recount the origins of everyone’s favourite space-faring scoundrel: the scruffy-looking nerf herder himself, Han Solo.

In 1977, Solo was an instant star-making role for Harrison Ford; will the same be true for Alden Ehrenreich, a scene-stealer from the Coen brothers’ old-Hollywood comedy Hail Caesar! (2016)? Would that it were so simple. Nevertheless, if Ehrenreich isn’t quite a match for Ford’s iconic rogue, he’s a perfect fit for the nascent space pirate – a younger Han who is wide-eyed and naive, without the universe-weary cynicism that would later complement his brash, cocksure magnetism. 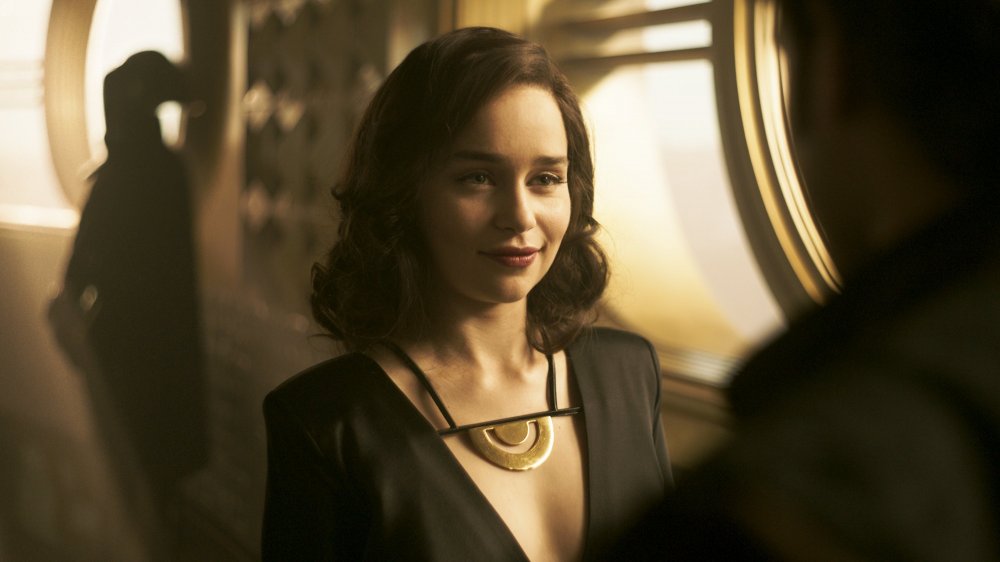 Seasoned Star Wars screenwriter Lawrence Kasdan (The Empire Strikes Back, Return of the Jedi) returns, along with his son Jonathan, to turn a compelling supporting character – indeed, one of the most compelling in cinema history – into a veritable protagonist, with a tenuous thematic thread that pits selfish against selfless, the collective against – if you will – the solo. Here, Han is a rebel without a cause, crew or clue, a street urchin indentured to Corellian crime boss Lady Proxima (voiced by Linda Hunt) who makes a break for freedom with his young sweetheart Qi’ra (Emilia Clarke of Game of Thrones), but the two star-crossed lovers are cruelly separated at the border. Years later, Han is a grunt in the Imperial Army, and then a tagalong with a group of smugglers led by duster-wearing desperado Tobias Beckett (Woody Harrelson), all the while searching for his place in the galaxy, and aching to find the love he lost.

What follows is a series of Just-Solo Stories, ranging from How Han Got His Signature Blaster to How the Millennium Falcon Made the Kessel Run in 12 Parsecs. Despite its status as a ‘standalone’ film, this Star Wars Story is locked in the tractor beam of its predecessors. Key protagonists from the original trilogy appear, including Chewbacca and Lando Calrissian (a mannered Donald Glover), along with the customary cameos, callbacks and Easter eggs that overpopulate franchise films in the modern multiplex.

In its initial incarnation, Star Wars was a melting pot of inspiration both stated and subconscious that bubbled away in the creative minds of Lucas and his collaborators. In the 40 years since, each utterance and inference from Lucas’s ur-texts has been catalogued and, now, exists to be explained or expanded upon. In Star Wars, Han Solo appeared fully formed, yet Solo seeks to steadfastly scrutinise the character’s every trait and quirk. It’s an intriguing development for escapist science fiction to leave nothing to the imagination which could better serve as commercial content. 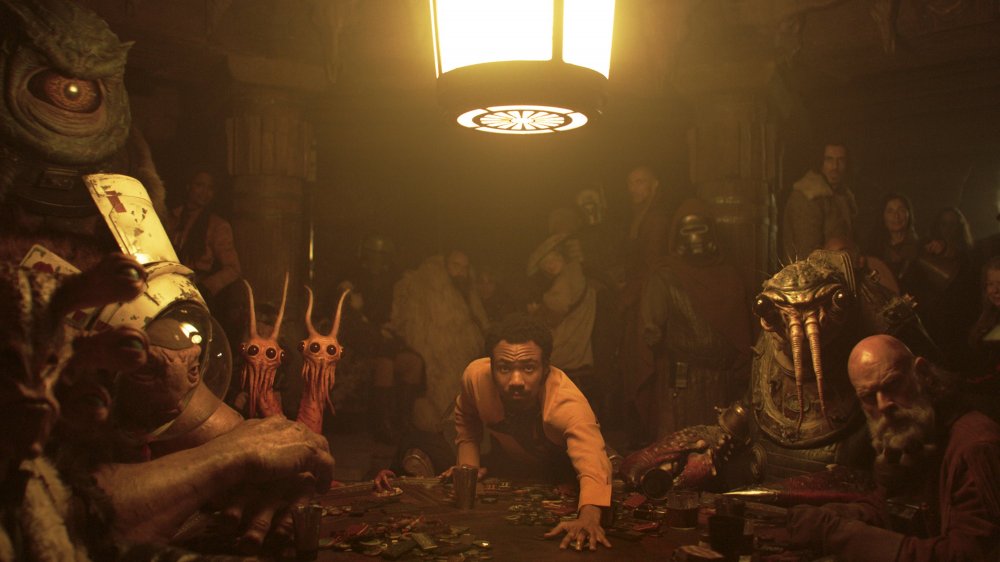 Nevertheless, if you’re going to make a film that is essentially a narrative colouring-in exercise, you might as well make it zippy and fun – and that’s precisely what director Ron Howard delivers. Howard was initially hailed, in an almost backhanded manner, as a ‘safe pair of hands’, replacing original directors Phil Lord and Christopher Miller (The Lego Movie, 21 Jump Street) mid-shoot, after creative differences with the top brass at Lucasfilm came to an impasse.

Under Howard’s direction, Solo barrels forward, barely pausing for breath over its two-hour-plus running time. At that clip, Howard often discards stylistic ideas as soon as they are suggested: what starts as an intergalactic riff on a Civil War western, with Han adrift in a chaotic landscape of warring factions, amoral bandits and high-stakes gambles, soon returns to more familiar, space-adventure territory. The result is by no means a thoughtful film – especially when compared with Rian Johnson’s radical (and, in certain circles, controversial) 2017 reworking of franchise expectations, The Last Jedi – but it is, perhaps, one of the saga’s most purely entertaining pieces of product to date.

Related to Solo: A Star Wars Story review – how the young rebel fulfilled his franchise dues