The force of Star Wars 6 aka Episode III is with us at last. It looks much better than it sounds, reckoned our original 2005 review.

☜ Attack of the Clones review: it’s hard to be a Jedi in love
☞ The Force Awakens review: J.J. Abrams brings her in safely 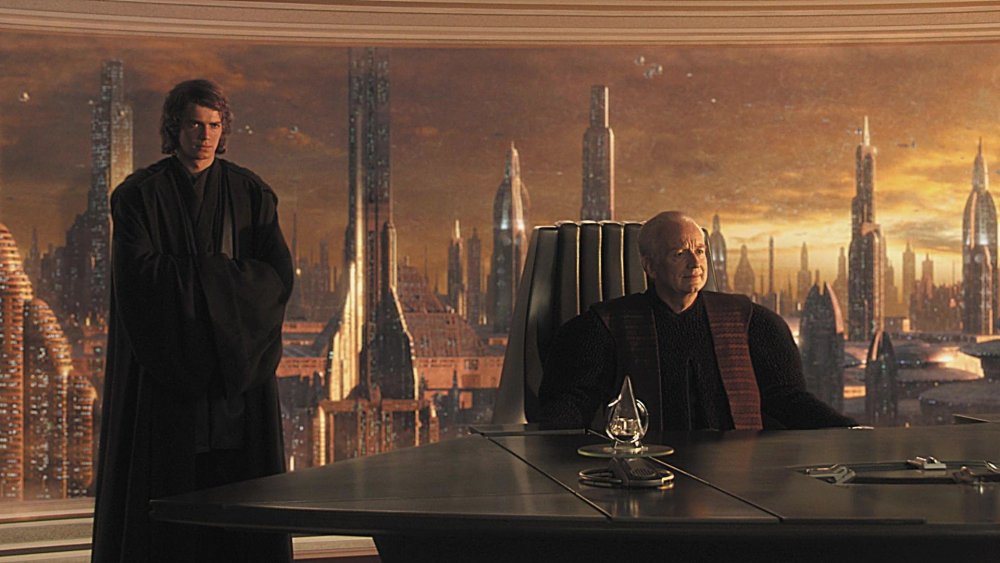 Hayden Christensen as Anakin Skywalker and Ian McDiarmid as Chancellor Palpatine in Star Wars: Episode III – Revenge of the Sith

George Lucas’s ‘original’ plan – which seems to have been hatched somewhere after the break-out success of Star Wars in 1977 but before the development of its immediate sequels The Empire Strikes Back and Return of the Jedi – was to make a “trilogy of trilogies”. This required the first three films to be retroactively reconfigured as Episodes IV to VI of the saga in rerelease versions that tinker slightly or massively to smooth over inconsistencies: poor old Sebastian Shaw, once a ghostly Anakin, has been digitally exorcised from Jedi on DVD and replaced by Hayden Christensen, who plays the character in Episodes II and III of the second-wave trilogy.

This set of three prequels, which begin with The Phantom Menace and Attack of the Clones and follow the transformation of Anakin, Luke Skywalker’s father, from ‘good’ Jedi knight to the sinister Darth Vader, definitively incorporate their status as Episodes I to III in their official titles. Things seem to have gone quiet on the possibility of the third trilogy, though ongoing spin-offs in other media (comics, TV animation, books, computer games) zip around the films like the tiny, buzzing vehicles that are perpetually on the move in the background of Lucas’s stately vistas of outer space or alien worlds. So, we must assume that this concludes the saga.

The stated aim of Star Wars Episode III Revenge of the Sith – or Star Wars 6, as it might be labelled – is to join up the two trilogies, taking the characters, and that long-ago and far-away galaxy, to a point that sets the scene for the opening of Star Wars, which remains the series’ most exhilarating stretch. This is a dramatic challenge for Lucas, whose abilities as a writer lag notably behind his skills as a director, which in turn plod behind his genius as the creator-producer-owner of his own universe. The thrill-a-minute action of an old-style comic-strip serial and the vast fantasy spectacle expected in the era of Lord of the Rings or The Matrix must still be delivered, but in the context of a plot that owes more to Julius Caesar or The Godfather than to Flash Gordon or Buck Rogers.

The subtlest moment in the saga comes in the climax of The Phantom Menace, as young Anakin Skywalker wins his bones as a hotshot pilot blasting enemies out of the sky; audiences could easily miss the point that we are witnessing not a simple triumph but the child who will grow up to be the galaxy’s greatest villain killing for the first time. In Attack of the Clones Anakin loses an arm – as his son loses a hand in The Empire Strikes Back – and begins to brood about whether democracy, paradoxically espoused by a religious-royal-mystic chosen elite, is the best way forward for the universe as a whole and his imperilled family in particular.

In Revenge of the Sith top-billed Ewan McGregor – whose performance as Obi-Wan Kenobi, Anakin’s Jedi mentor, edges ever closer to an Alec Guinness imitation (the English actor was the older incarnation of the character in the earlier trilogy) – is the ostensible hero, but the film is dominated by Ian McDiarmid’s all-purpose villain. McDiarmid’s Supreme Chancellor Palpatine is so busy shoving every major plot advance along that his empire of evil risks seeming understaffed, even if the whole point of this episode is to show how he gains his most devoted disciple (albeit the man who will eventually kill him) by turning the clean-cut Anakin into the monstrous Darth Vader. As Anakin’s legs are replaced, we even see how the averagely tall Christensen becomes as giant as the original’s Dave Prowse, while the visor melds his voice with James Earl Jones’s – suggesting he has become black in voice-box as well as in armour.

As in the 1969 Bond entry On Her Majesty’s Secret Service, another atypical ‘Part Six’, darker matter necessitates a reordering of the formula. Lucas has been roundly criticised since the Ewoks of Jedi, but more pointedly with Jar Jar Binks of Phantom Menace, for the fact that the childish, cutesy humour – which began with the droids of the original – has become embarrassing. Here Jar Jar has no dialogue, the robots have little to do (Jimmy Smits’s Senator Bail Organa orders C-3PO’s mind to be wiped for no reason other than to tidy up another bit of continuity) and none of the new characters is remotely cute or humorous.

For the first time, the series’ overall title makes sense – here the stars are finally at war. In a move that might relate to America’s current foreign policy, even as it draws on the rise to power of the Caesars or Hitler, we are shown a leader who has manipulated democracy to the point where he can invoke a paper tiger of an external threat to justify the suspension of the democratic process (Senate member Padme bitterly comments following Palpatine’s announcement that the republic has become an empire that freedom is dying, to a round of applause).

This is all good stuff, but Lucas’s characters still remind one of the cursed fairytale princess who can’t open her mouth without a frog leaping out: every line of dialogue in the film falls dead, and none of the distinguished cast can do a thing about it. Whenever the space opera pauses, the characters (and Natalie Portman’s Padme suffers most) stand in big rooms telling other characters things they’ve said before and will say again. Each time Lucas cuts away from a battle or a duel to politics or (worst of all) Anakin’s home life, there’s a sense that he’d like to draw out the resonances Coppola finds in moving between public rituals and the mass murders of the Corleone enemies, but instead succeeds only in stopping the film for mind-numbing minutes as he labours over such obvious ironies as the fact that Anakin’s terror of losing his wife in childbirth leads to the circumstances where this is exactly what happens.

Yet when the characters shut up and are in action (or even in tableau) Revenge of the Sith can claim to be the best-looking Star Wars episode of all, if not the most exciting, most imaginative or most affecting. The opening shot, which needs to top the beginning of Star Wars, is a fully realised depiction of something that even a few years ago would have been an inconceivable special-effects scene – two tiny ships threading through a vast, screen-filling space battle.

Revenge of the Sith is packed with equally astounding, equally beautiful shots and sequences, especially the many duels: the coughing, stooped droid General Grievous tossing off his cloak to reveal four arms each holding a light sabre to engage Anakin in battle; Yoda and the Emperor clashing in the vast, now empty Senate building, finally making use of a set that had so far been only an impressive backdrop and distraction to the real business, and toppling a myriad of individual flying saucers as they fight; Obi-Wan and Vader laying about each other in the molten landscape of Mustafar, making use of mining platforms, with Vader suffering Certificate 12A-level mutilation on the shores of a lava river.

For the first time since the best moments of The Empire Strikes Back, a Star Wars film looks as good as the lavish production art displayed in the tie-in coffee-table books, while the digital fuzziness of Episodes I and II has disappeared in favour of rich, confident, detailed visuals. The home stretch, as all the pieces fall into place for Star Wars (now renamed Star Wars, Episode IV: A New Hope), mostly gets away from talk – though there’s a left-field development about Obi-Wan’s ability to commune in his desert exile on Tatooine with his Jedi master Qui-Gon Jinn (dead since The Phantom Menace) that must be dangling for some interim development. Whether in the elaborate sequence that shows the Doctor Doom-like sealing of Darth Vader into his fetishist armour or the brief glimpse of a near-extra (Wayne Pygram) made up to resemble a young Peter Cushing (who appeared in the 1977 movie) and aligning himself with the Emperor, at last the images are allowed to resonate.